With Version 1 of Invisible complete, I started to address my desire to have people be able to put in and take out their invisibility. For this to happen with the current design of Invisible, the sculpture would have to be emptied and re-wrapped every so often, which makes it a bit of a hassle. Plus, there is a lot to be gained from a person being able to put in a note and immediately take one out- to learn something about the community they are a part of. I started thinking about different materials invisible could be wrapped in that would allow more flexibility in terms of taking things out of the sculpture.

One idea is to line the entire sculpture with fishing line. The fishing line would hug the form even tighter, so it would show more of the form than the plastic wrap would. In the space between the strands of fishing line, you could also reach your hand in and take a note out. The downside of the fishing line is that it is not waterproof, so this Invisible would need to live indoors, in a library or museum. I also realized the fishing line might not be stretchy enough to reach your hand through to take out a note, so I decided to use clear elastic string instead.

Once I had decided on the elastic, it was a nightmare to make it happen. I re-cut all the Invisible pieces, but this time with 3 mm holes arrayed around the edges of the pieces. I also had to project a ring of holes around the neckpiece on the chest piece so that the neck wouldn’t drop off. The first time around I forgot to change the chest piece, and it didn’t work at all.

Once I had all the pieces changed and cut out, I assembled it just like any other Invisible. When it came time to wrap the sculpture, I pulled up a chair, and began the long process of stringing the Invisible up. I spent 30 hours sitting by invisible stringing layer by layer until the whole thing was done, but it was worth it!

This invisible is breath taking! From afar, the string reads extremely well. I like how it is truly transparent with the string. My only critique is the chest plate becomes a little harder to read because the fishing line distracts your eye. This Invisible achieves the goal of being able to both add and take out a note at the same time.

My mind is already leaping ahead to a third version. I’ve started experimenting with dripping epoxy down the sides of the frame to create a web-like natural aged look, also fully translucent. I’ve stuck some of the leftover acrylic shards from the frame through boxes to use for experimenting. So far it has been hard to catch the epoxy at the exact moment it is hardening to get the kind of dripping I’d like. I’ve tried two kinds of epoxy, and various recipes of hardener to epoxy, and haven’t found my magic formula yet. Stay tuned. 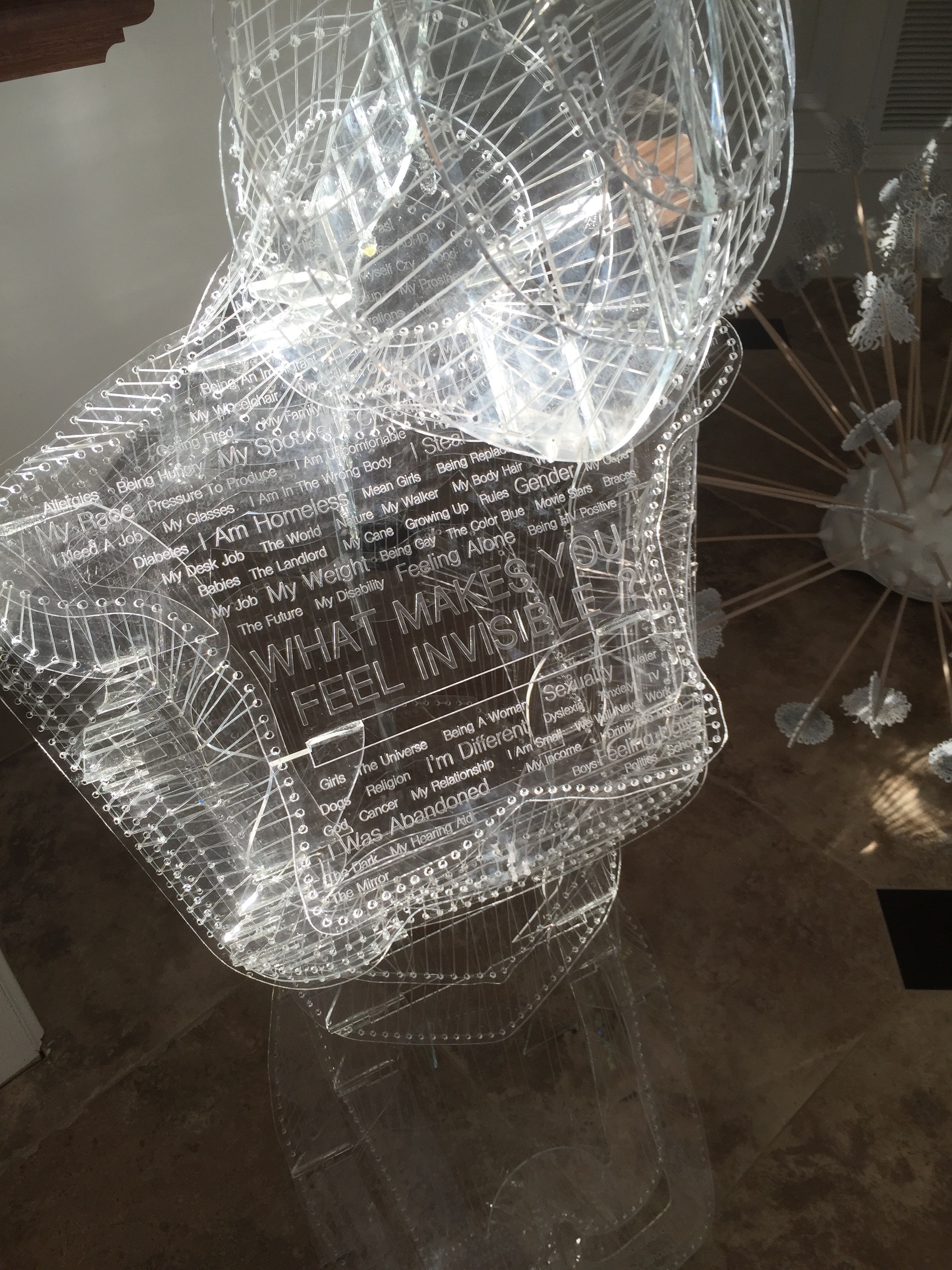