So, @Elliot Williams has been playing with similar ideas over on his #ATtiny45 EverLED project. There's some neat ideas over there, including the use of a different microcontroller, inductor sizing, and LEDs. One of the interesting additions he made was a pull-down resistor on the MOSFET gate to avoid the possibility of an un-driven gate being pulled high by whatever voltage fields are around. This can happen when the microcontroller output pin is tri-stated. If the MOSFET is held in a conducting state, the battery is shorted across the inductor and everything gets hot. Elliot mentioned that this happened for him during programming. Of course, the possibility also exists that during the lifetime of the circuit (which may be many years on a single cell), a cosmic ray strike or degraded flash memory could cause a similar problem with the microcontroller code, holding the MOSFET conducting, and possibly causing problems with excess heat or chemical leakage from the cell. It's very unlikely, but also very cheap and easy to protect against.

When I re-used this circuit in #Decade Flashlight, I added a resistor in the power supply line to limit current in this case: 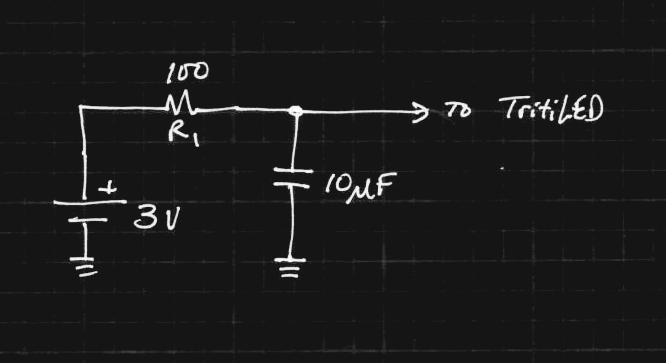 The 10uF capacitor provides storage for the current pulses - in fact, the TritiLEDs run for a few seconds after the battery is removed just from this capacitor.

The 100-ohm resistor limits the maximum current through the inductor and MOSFET. Assuming a 3V battery, the current is limited to 30mA, which will quickly drain a CR2032, but only allow 90 mW of power to be dissipated in the loop - that's low enough not to cause any damage. In practice, the internal resistance of the cell and the parasitic resistance of the inductor make the limit a little lower.

So, it's safer now, but what about efficiency? The TritiLEDs consume from 4-30 uA or more depending on how they're programmed. Let's assume we tune one to about 12 uA, which will run for two years or more on a CR2032. The voltage drop across R1 is then V = IR = (12e-6)(100) = 1.2 mV. Since the current through the resistor and the rest of the circuit is the same, the ratio of power in the resistor to that used by the circuit is 1.2mV / (3 - 1.2mV) = 0.04%. This is ridiculously small, and essentially doesn't change the efficiency or brightness of the circuit at all.

The addition of this resistor is one of the things I'm rolling into the 2.3 board. I've also added them to all of the versions I have made for friends. If you build some of these circuits, please consider adding a resistor in the power supply like this. The value isn't critical - in the above case, the loss is around 1% even with a resistor of 500 ohms.

Sorry about the clickbait title :-)