Progress on the Test Stand and Broken Bolts

The last few weeks have seen some progress on instrumenting the #Drone Test Stand. You can check out that project for more details, but so far I've made a prototype of electronics to measure the thrust while Goliath is being tested and put together the hardware to incorporate the load cells into the test stand. 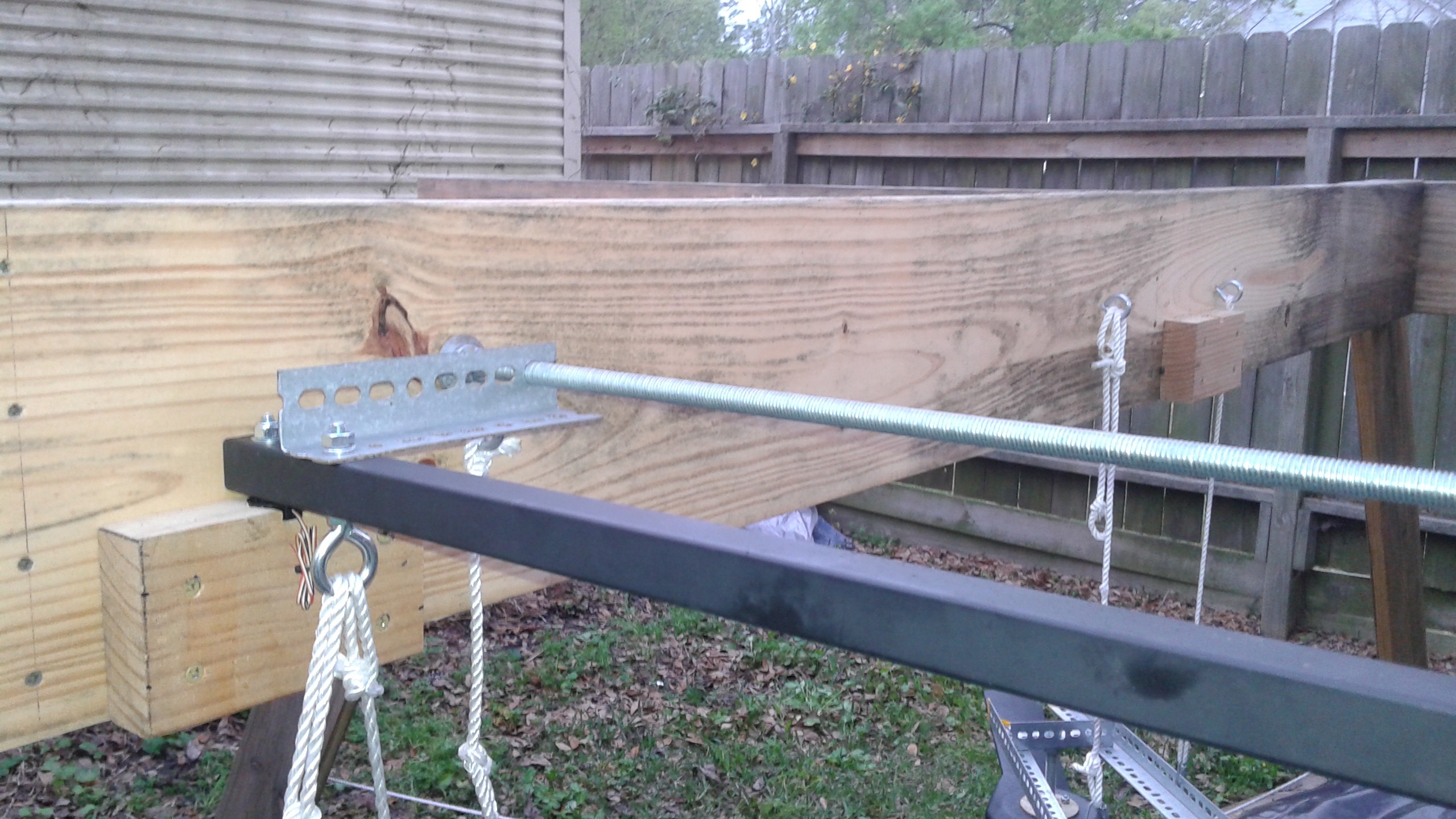 I attached one of support bars to the test stand and decided that it'd be good to run a test with just the one support bar to make sure the setup works before adding the second support. 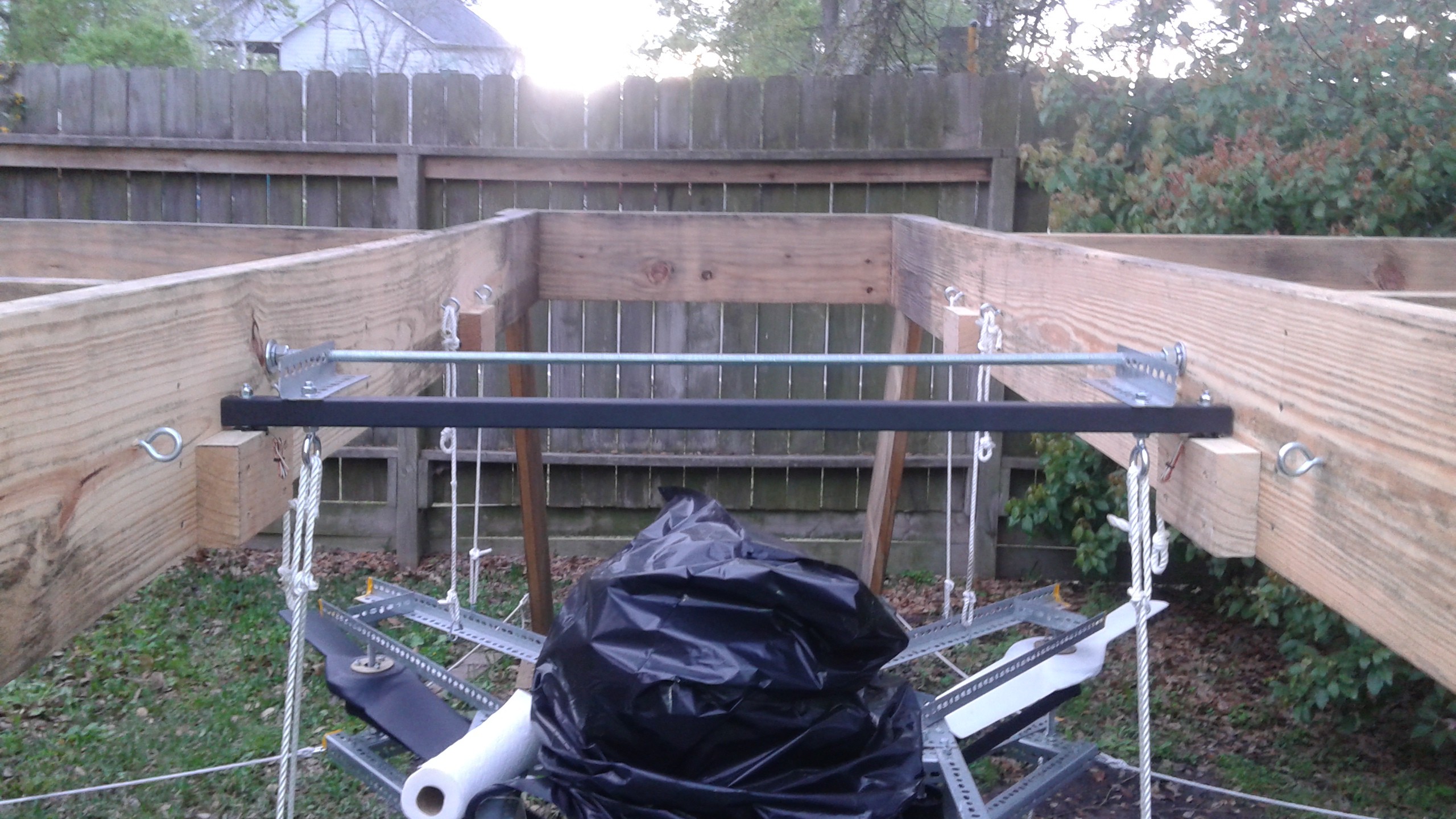 The plan for the test was to start up with the choke on, make sure the support bar was okay, and then keep running the engine on idle to warm up the engine. After that I would shut it off and turn off the choke (there's no servo setup for it yet) and then try another run at full power. Here's the video for the test:

As you can see from the video one of the propellers broke free after idling for a while. The propeller broke free after all three of the bolts that hold it onto the pulley failed. Replaying the video after test it was clear that there was a increase in oscillations before it failed. It's likely that one bolt failed and then the others failed under the increase in load. Fortunately having the shaft supported at both ends keeps the prop captive instead of the prop sailing off in the sky. There was no damage to the vehicle other than the three bolts. Here's a closeup of where the bolts broke. 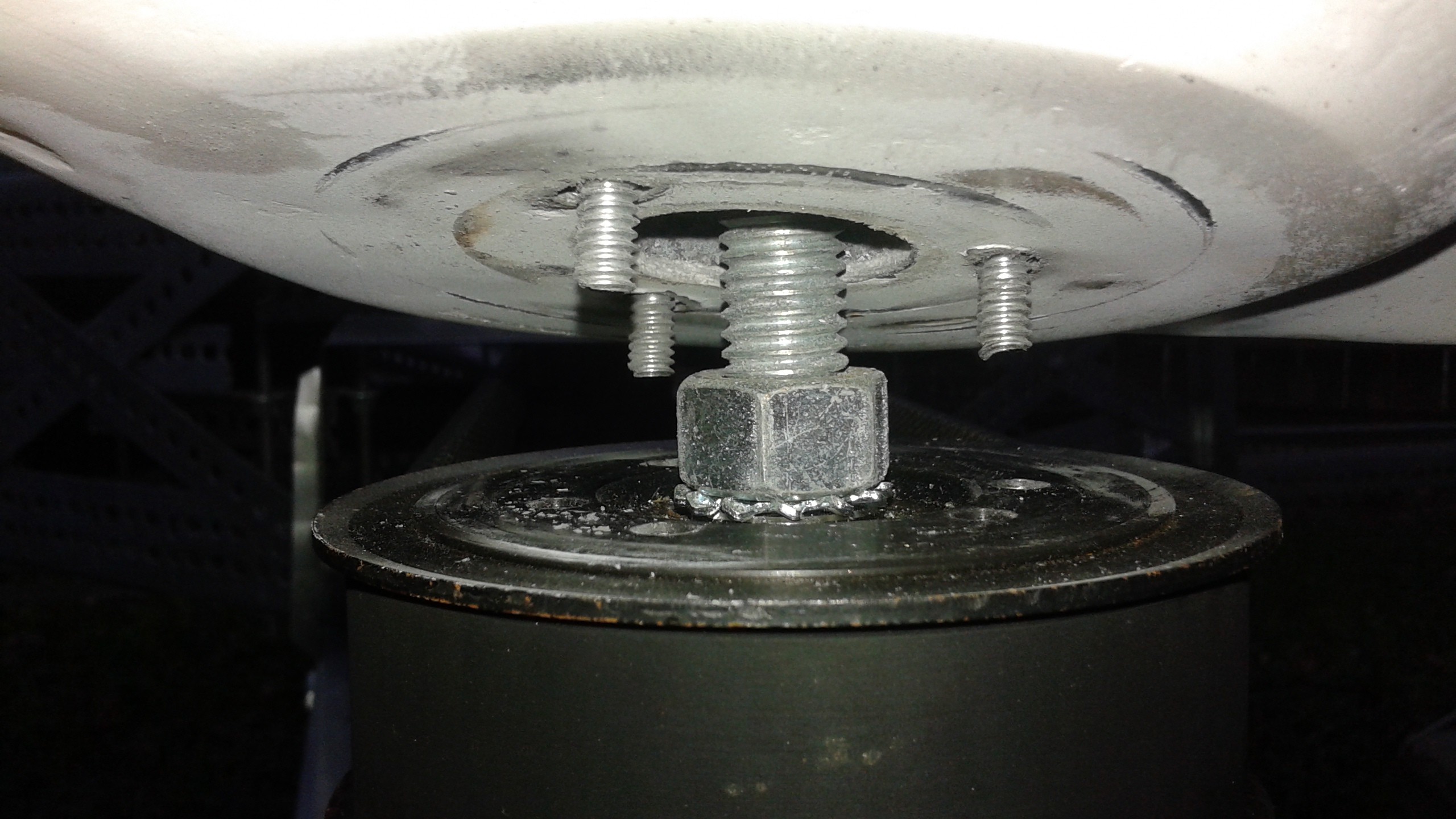 The bolts were just generic zinc 1/4" cap screws 3 1/2" long. The bolt passes through the pulley and are threaded into the QD bushings and hold the two parts together. The bushings come with shorter 1" long bolts for this purpose, but I swapped them out with the longer bolts so that they also served the purpose of the prop bolts. The prop then goes over the bolts and nylon lock nuts go on above the prop to hold it in place. The bolts broke where the prop and bushing interface.

The easiest fix for this is to get higher strength bolts (grade 5 or grade 8). Unfortunately it looks like I'll have to special order them as I need the full length threaded and all the local hardware stores only carry partially threaded. I did find some stainless one today that I can use in the meantime, but stainless is a little weaker than a Grade 5 bolt so I'll just use those temporarily until I receive the others. It should be relatively quick to swap them out at all the propellers, add the second support bar and do the next test.

We Interrupt our Regularly Scheduled Broadcast...

@Smerfj @mechanicalsquid Thanks for the great info!  One of the youtube comments mentioned that the bolts looked torn and not sheared. I had a chance as I was packing up the quadcopter for the move to take a closer look at the bolts.  I think they could be right that the bolts were torn and not sheared.  When I lined up the bolts with the bushing, they split exactly in the middle of the threaded section.  When the bolts broke, the threads where still holding it in place, but the vibrations caused the prop side of the bolts to vibrate loose.

I think what happened is that the pulley/bushing side of the bolt is loaded one direction and then the prop/bushing side of the bolt is loaded in tension in the opposite direction and the combination of the two pulled the bolt apart.  I wasn't paying attention to the provided bolt markings when I swapped out the bolts and it turns out the bolts provided with the bushings are grade 5, while the longer ones I replace it with are grade 2. I'll have to pay more attention to that in the future.

Did you check the other prop bolts to see if any exhibited early stages of failure? They definitely didn't shear, as the shear force would have broken them even with the pulley/prop interface. You should look into getting UNF-3 threaded hardware. It'll be expensive, but the valleys of the threads are specifically rounded to avoid crack initiation in high cycle fatigue situations. You have to get both Bolt and Nut though, as a UNF-1 or 2 nut will "cut" the valley of a UNF-3 bolt and cause the same issue.

Oversize your holes and run split bushings that press fit into the bolt holes, then run the bolts through the middle. The bushings take the shear load and the bolts only apply tension.

Vibration failure like that is more of a high cycle fatigue failure due to very low amplitude bending of the bolts every time the engine fires. Your threads have sharp valleys that are crack initiation points, even stronger bolts risk the same failure.

Awesome stuff. I'd love to see it fly!

Just a thought with
your bolts problem - it looks to me that each bolt holding the pulley
onto the flange is in shear. For shear forces, you should be using
fitted bolts. The bolt shank then takes the load rather than the
threaded sections. Loading a threaded bolt in shear for non-trivial
loads results in a very large drop in the maximum shear that the bolt
can take. Fully threaded bolts (sometimes called screws) should only be used in tension alone.