Back up and Running

Goliath has now been completely reassembled and is running again. It took awhile to double check everything and get the tension just right on the belts. Below is the video showing Goliath being tested after reassembly.

Obviously, the ducting didn't work well. I had assembled the ducting using screw clamps at the joints. In hindsight, I should have used sheet metal screws, in addition to the screw clamps, to keep it from vibrating loose. I had protected against the possibility of the loose ends falling down, but didn't think about the joints. When the ducting failed during the test, the vehicle was vibrating more than usual because the tension on the belts wasn't quite right. That was later fixed, so if I decide to use the ducting again, the vibrations shouldn't be as bad. Goliath didn't suffer any damage because the aluminum ducting is pretty insubstantial. The second run was good, with the exception of the ignition connector coming loose after the engine came up to full speed (and I need to move my Styrofoam sheet stock somewhere else).

For those who haven't read about the ignition system previously, here's a quick refresher. The engine has two ignition coils, one for each cylinder. The coils don't require a power source and are triggered as the engine rotates. To start the engine, the ground connection to the coils is opened and then the starter is used to start up the motor. To shut off the engine, the connection is closed again.

On Goliath, relays are used to operate the starter and ignition and the relays are setup for the ignition and starter to go to a fail-safe condition if they lose power or signal. During the full throttle test, the signal wire coming from the remote switch vibrated loose and the relay closed, grounding the coils and shutting off the engine. On the bright side, I know the fail-safe works, I just need better connections. Below is a picture I'd posted previously of the Parallax relay board being used on Goliath. The relay signals come through the standard headers next to the parallax logo, labeled RLY1 & RLY2, connected with Futaba style servo connectors. The only thing holding the connectors to the headers is the contact friction on the pins themselves. Eventually, something more vibration-resistant, like the Hirose DF13 connectors that the Pixhawk uses, will be needed.

This was also the first test where I had good weight measurement immediately prior to the test. A bathroom scale was used to take the measurement. First, some wood blocks were placed on the scale to distribute the weight evenly and then Goliath was placed on top of the blocks. Here is a picture of the scale with wood blocks supporting the vehicle. 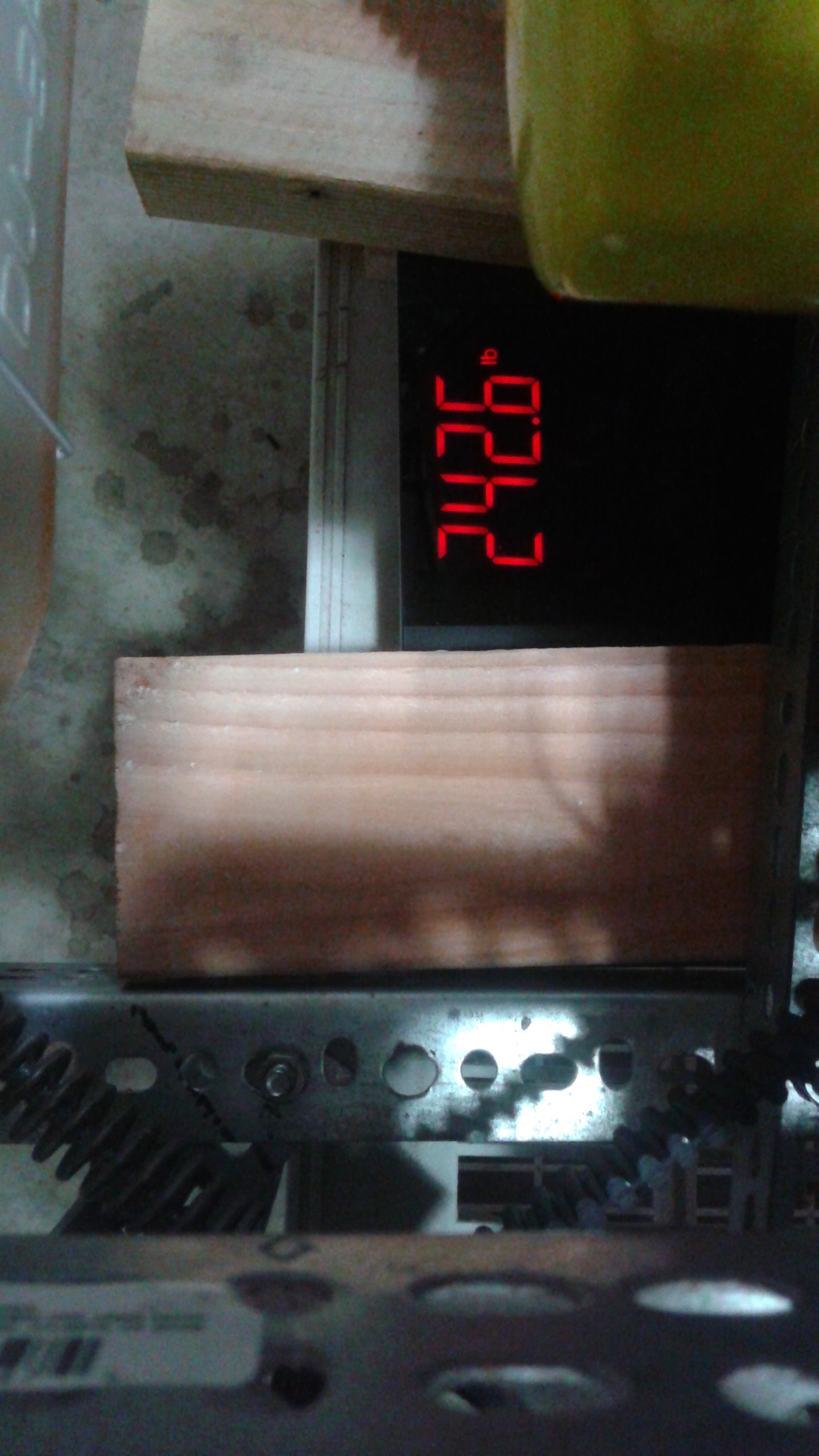 Subtracting out the weight of the blocks, Goliath weighed 238 lbs at the start of the test. This is higher than was expected as an empty vehicle weight of 200 lbs is desired, but Goliath weighs less than the theoretical total thrust of 255 lbs. It is evident that Goliath is putting out less than 238 lbs of thrust. The thrust measurement electronics will be finished up soon, which will give a better idea of the total thrust. The fix is likely going to be re-designing the propellers to get additionally thrust, but additional data is required before starting that effort.

Efforts will continue to determine where weight can be eliminated without compromising the stiffness of the frame. Once the configuration is nailed down a bit more, a Mark II version with a lighter frame will be built, but for now, the design flexibility that the slotted angle provides is necessary. During initial testing, the frame tended to flex while the engine was running, particularly at startup (see Test 2 video below).

Later cross members and some all thread running vertically to stiffen the frame were added. It's sufficiently stiff now, but efforts have already been started to make the prototype lighter while maintaining the stiffness. Below is a shot of removing one side of the vehicle and replacing the wide side beams with narrow side beams and reorienting the cross members. 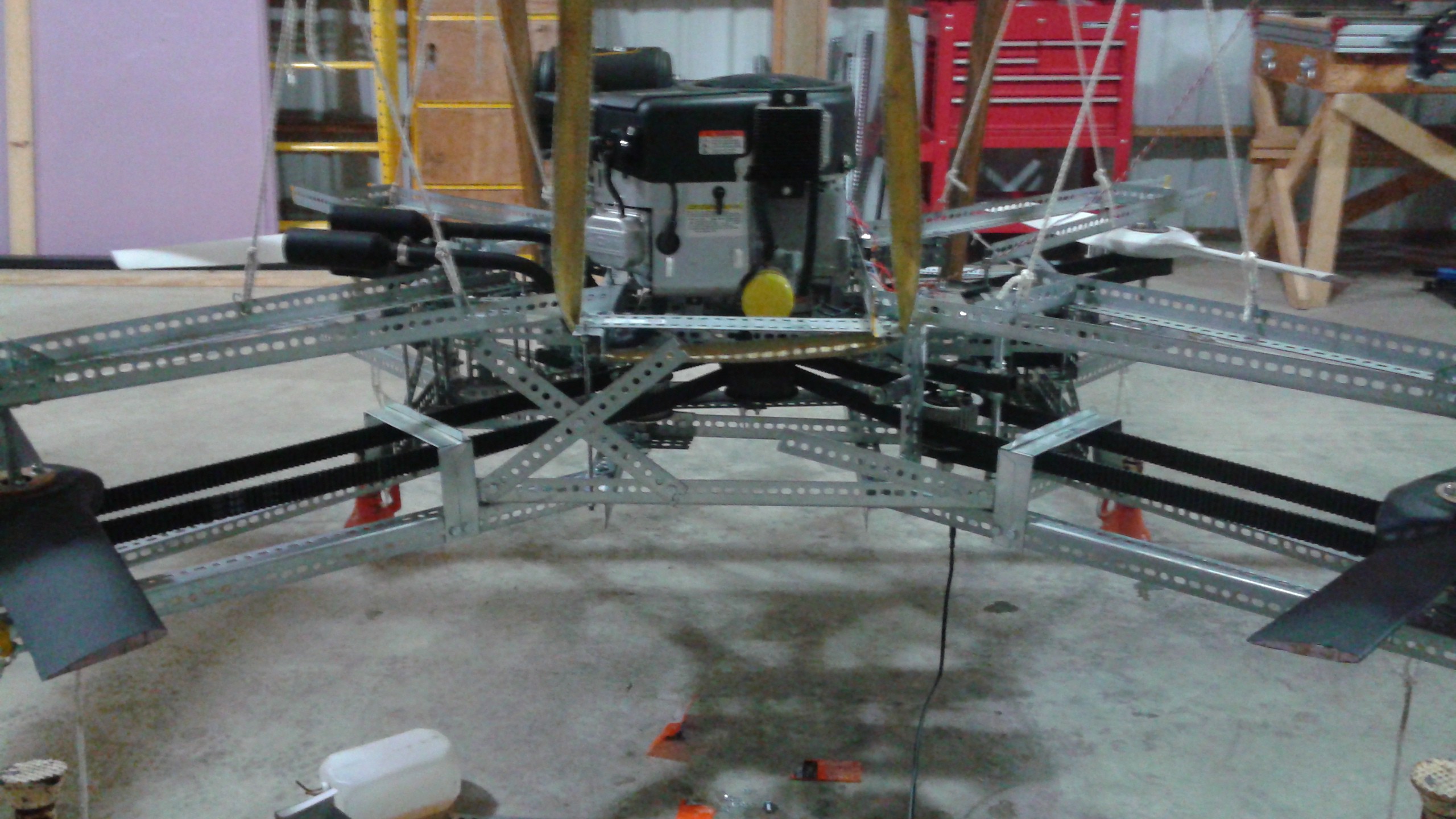 The new structure configuration will be tested soon and hopefully the thrust electronics will be completed shortly thereafter. Watch for more test videos in the near future!

Settling into the new place

This is a terrifying work of art