Time to look at the pluviometer, or rain gauge. This is a mechanical sensor that looks a little like a see-saw. A small plastic bucket is placed on each side of the fulcrum. The buckets are designed so that when a critical mass of water is in one bucket it tips the see-saw and the bucket on the other side starts filling. The process continues as each bucket is filled and emptied. A picture paints a thousand words, so here is a view of the inside of the pluviometer: 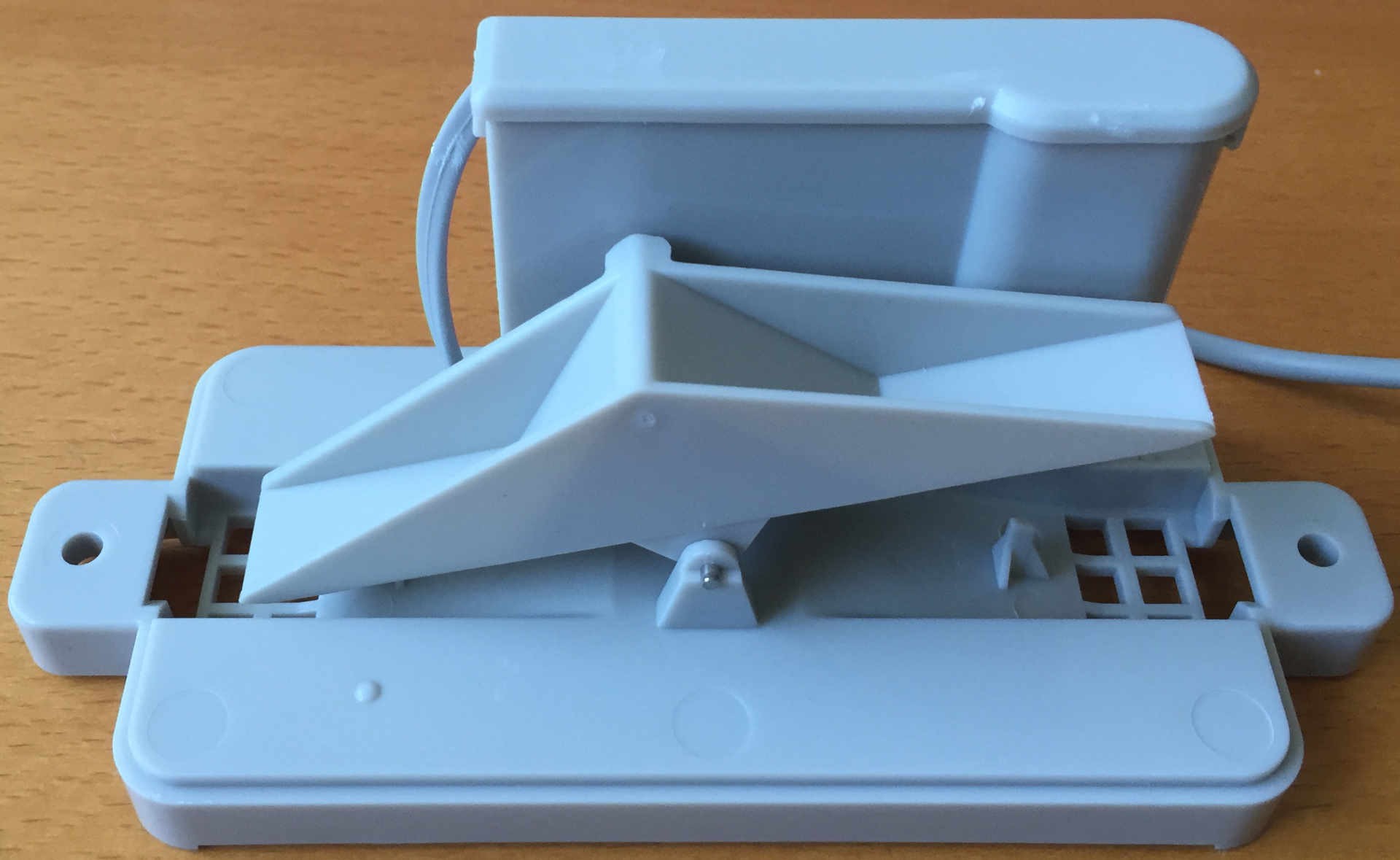 A small magnet is placed on the see-saw and a reed switch is behind the fulcrum. The tipping motion triggers the reed switch each time the see-saw tips, this in turn generates a single pulse.

Reading the switch becomes a seeming simple repetition of the wind speed problem, namely debouncing a switch and attaching an interrupt.

One long term goal has to take this solution off grid. This will make power consumption a critical factor in the design. Attaching an interrupt does not necessarily become an attractive option as the Oak would be running continuously and with the WiFi running this would consume a fair amount of power.

According to the specification for the pluviometer, a pulse will be generated for every 0.2794mm of rainfall.

One possible solution to the power problem would be to put the Oak to sleep and wake it up every say 5-15 minutes to take measurements and upload them to the cloud. Doing this would reduce power but would also mean that no measurements would be take during the sleep period if interrupts were used.

The downside is that eight pins are needed to read the output from the counter. With only a small number of pins, many of which have already been used, this will require some way of adding extra pins to the system. Fortunately there are a number of digital IO expanders on the market. A common series of chips is the MCP23x17 chips. These add an additional 16 inputs/output pins with communication to the chip vis I2C (X=0) or SPI (X=S). The I2S variation will fit the bill nicely.

One final connection that is required for the counter is a reset connection. Left to itself, the rain gauge counter would continue to count pulses until the counter overflowed and started from zero once more. From a design perspective there are a few options:

One consideration will be the amount of rainfall the system can detect before it resets to zero.

Which gives 4096 counts. However, for simplicity we will only consider the lower 8 bits, i.e. 0-255 counts. The system can always be expanded later should this be necessary (or if the system has the capacity).

Giving a maximum rainfall count of 71.247 mm per counting period. It is envisaged that the counting period would be somewhere in the region of 5-15 minutes. This would make an hourly average of 285mm assuming a steady rainfall and a 15-minute interval between counts.

This should be well within expectations for UK weather.

As an aside, the full 12-bits would allow for a rainfall of 1144mm per counting interval, or 4.5 metres of rain per hour.

With a little supporting hardware to be added, the schematic looks as follows: 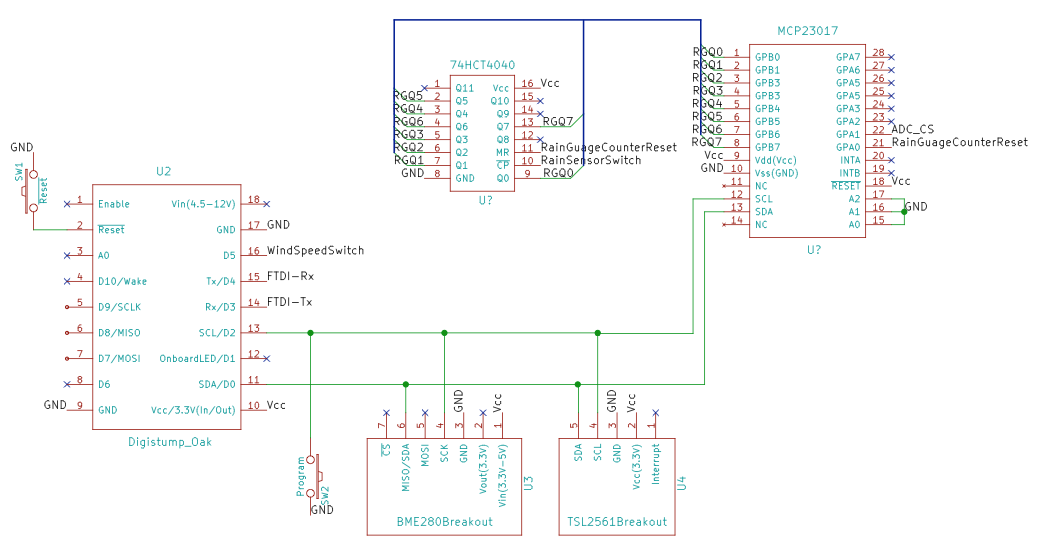 The rain gauge counter bit values have been labeled RXQx, RG = Rain Gauge and Q is the standard notation for a bit in a logic design.

The MCP23017 (I2C version of the IO expander) is sold by Adafruit. They have a standard Ardunio library for this component and so in the interest of code re-use, expediency and idleness this will be used.

So the first thing to do is to create an instance of the MCP23017 IO expander. Next up, the output expander needs to be setup. Looking at the schematic, the output from the counter is mapped to port B on the MCP23017. This maps to IO pins 8 to 15 inclusive. These bits should be set to inputs. One final piece of configuration is the reset pin, this needs to be set to output:

Reading the pulse counter is a simple matter to reading the state of each bit starting at 0:

The eagle-eyed amongst you will have spotted a small flaw in the above logic, namely that the pulse counter could increment whilst the system is reading the values. It turns out that this matters a great deal in some cases.

This problem is noted and will be resolved at a later date.