Food spoilage and wastage is a major issue in both developed and developed nations.
Countries like China,India has been plagued by tainted milk, meat and grain that have endangered people’s health in recent years. A study on global food wastage found that about 21 million tonnes of wheat go waste in India.

Despite proper storage conditions, There is a lack of a low cost scalable solution to detect spoilage of food.
FoodBeacon aims to fix it by measuring humidity and temperature of the food items from the warehouse near a farm to the food retailer. Anomalous condition of grain spoilage and meat rot are detected in advance to prevent fungal infections and incidence of food poisoning.

FoodBeacon nodes are 6$ coin sized sensors that can be deployed to either grain sacks or meat refrigerator. Temp&RH, Volatile Organic Gas and motion sensor data is sent over BLE to a mobile gateway unit, FoodBeacon adds traceability to the food supply chain thus empowering customers.

The application of IoT in food supply chains (FSCs) is one of the promising applications.
There is an imperative need for ensuring food quality across the supply chain. Achieving the objectives of food quality partly relies on physical traceability throughout the chain.

Automation of this process can reduce corruption in the process and will have a positive impact on the health of consumers. Era of IoT brings about new connections between food producers, transportation and retail companies who can work now together to ensure efficient delivery and food safety. Groups across the supply chain gain the real-time visibility and enable the automated, intelligent actions needed to ensure food is of the highest quality, delivered on time and prepared in optimal settings.

FoodBeacon aims to be extremely low cost aiming to mimic ideas relating to the IoT smart dust, Advent of low cost BLE MCU's like the Nordic nrf51822 makes it possible to get connectivity at low power in a size of a coin.
The sensors used are HDC1000/HTU21 for Relative Humidity and temperature and a MiCS5524 to detect VOC's, Ethylene and Ethanol produced during rotting of meat along with motion sensors using an ADXL345 to detect impact, vibrations and handling during transit.

Data from these sensors are sent to a gateway device which uses WiFi for the prototype but would use mobile data in final design of the device.

A smartphone app would be developed to visualize the data and alert if rot is detected, Further the app would enable inventory and delivery management. For the implementation we are using a Lightblue Bean due to it's small size, inbuilt battery Inbuilt accelerometer and the excellent documentation. 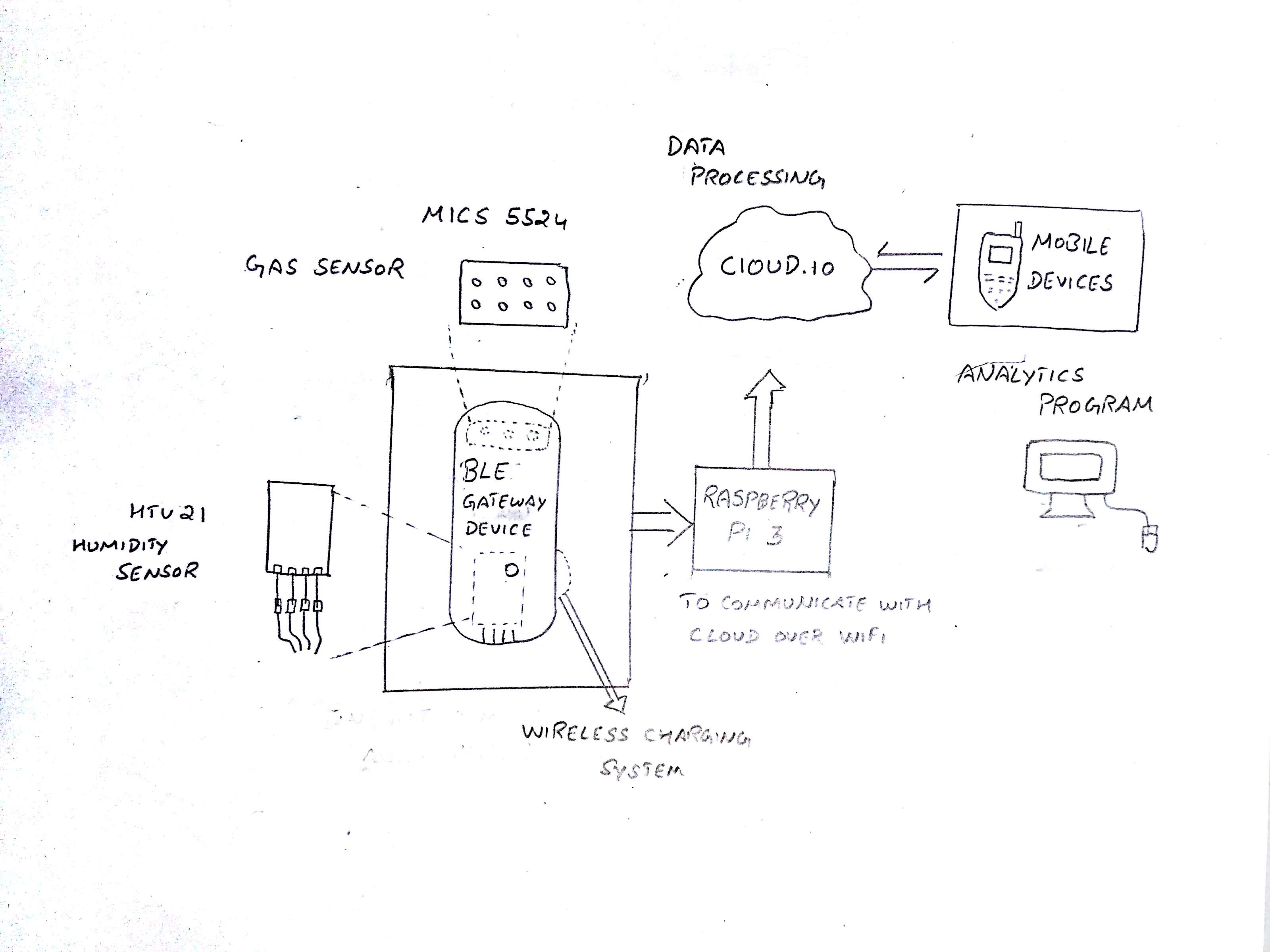 The next step would be to move towards an nRF51822 based design to retain a very low BOM cost (6$).
The sensor data from the different broadcasting FoodBeacons would be read by a Raspberry Pi3 which would be a bridge between BLE and GSM (Using a SIM800 module in UART).

Node-Red would be our primary software architecture to manage the interfacing between the FoodBeacons and the cloud.

Using the Node-Red as a platform to gather the data we can make sure that the desired personnel can access the data's and will be notified about the state of senor values if properly programmed to send a alert,

The raspberry pi3 sends over the packets of data to the Node-Red terminal,this data is processed by the customized flowgraph and it is compared with a reference threshold value to determine the quality and condition of food with that of the ideal condition.

If the values from the sensor does not keep in range between the upper and lower threshold limits ,it triggers the e-mail event to be proceeded which will send a alert to the concerned personnel.

This small Si7021 fully compatible with Arduino and works on I2C interface. Has a better resolution and measuring ability than DHT.
Project Owner Contributor

Si7021 based Temperature and Humidity sensor