I extended the QualColor color-wash LED control technology that I designed many years ago to support some home automation tasks such as temperature and control of relay-based devices and traditional white lighting. It uses a distributed architecture that communicates via a proprietary wireless protocol running on top of nrf24L01+ and nrf24LE1 radios (as well as a direct wired communication channel). Currently it controls custom LED fixtures and traditional light fixtures, the furnace and several decorative LED sculptures throughout the house. The system is operated by custom wall-mounted controls, wireless remote controls and a web-based interface with displays optimized for phones, tablets and computer web-browsers. I plan to continue to extend it with additional devices under control, new wall controls and additional functionality for energy monitoring and security.

I am interested to see if any of the technology described by this project is of interest to others.

A bit of history. The original QualColor LED lighting system was comprised of a touchpad-based RF remote control and three receiver/controller/drivers as well as a custom RGBW light fixture. QualColor is a distributed architecture with the local controller responsible for things like fading between colors and mapping color to output channels (e.g. RGB, RGBA or RGBW). Colors are described using the HSV color space. Unlike LED systems like the ubiquitous WS2812 LED strips that take a constant stream of data from a central controller, the QualColor system uses packetized commands to set colors or initiate a fade (interpolated) to a new color over a period of time. Communication is bi-directional and broadcast. Packets include addressing information that allow specific controllers to choose to execute them. The distributed architecture allows multiple control devices (e.g. handheld control, computer, etc) to send commands to any controller. State is managed by the controllers and may be queried by a control device if it requires it. Addresses consist of a 16-bit Zone and either 16-bit Unit or 8-bit Group (called Unit or Group addressing). Unit addressing allows commands to be sent to a specific device. Group addressing allows commands to be sent to multiple devices that are part of a group. The addressing supports wildcard addresses so a command can be sent to all units in a Zone for example (e.g. all lights in the kitchen). The RF protocol is a simple broadcast protocol with some built-in synchronization for multiple transmitters using the Nordic nRF24L01+ radio at 250 kbit/sec (for maximum receiver sensitivity) with the ability to add a repeater. The original design goal was for a remote control to operate fixtures in the same room and the Nordic radios were quite adequate for that.

The remote control utilized a touchpad with a color-picker graphic overlay and support for memory presets and initiating an automatic program (for example slowly changing random colors). It also had a USB interface to allow configuration and system control via a computer (the remote acting as a wireless interface into the system).

The original three systems were: 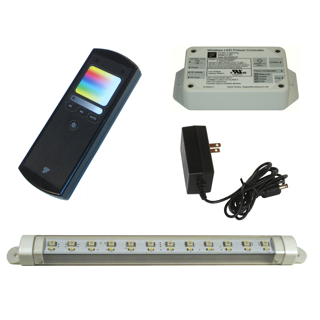 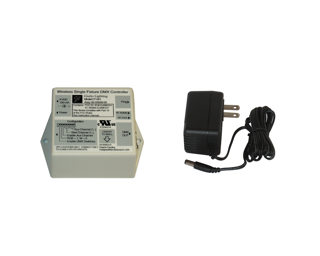 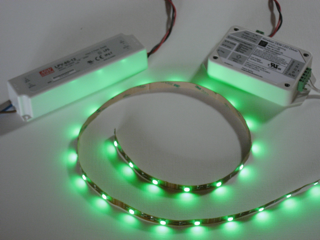 There was also some PC/Mac based software for configuring these systems or allowing computer control. As part of the development of the system I also designed a USB-based RF interface/repeater but it wasn't productized.

I sold the systems directly and ended up having limited success because, in traditional techie style, underestimated the sales effort. However I was left with a bunch of technology that could find other uses...

I like the way your phone controller looks! Do you have a custom phone app for your setup? If it is an open source phone app, I would be interested in using it with my project. Do you have a git or a bitbucket?

Thank you Rahim.  I am planning to open source at least most of this next year and will update this project.   However it's not a phone app.  It's a web server that runs on a central controller.

seems very similar to my project controller. I like the way urs looks and I think I can turn that web interface into a mobile application quite easily. When you are going to share it, please msg me, so I can try and turn it into an app for my project.

toniManero is a dancer. He likes to dance on MIDI floor and also knows how to move on RPC tunes, at RasPI disco.
Project Owner Contributor