Check out the video overview we made about the entire project:

I began this project at the beginning of summer not even having a clue how to go about it. I just kept trying and figuring it out. It has been a lot of fun, what a great learning experience. Now I can build robots with gears and more complicated pieces, w00t! 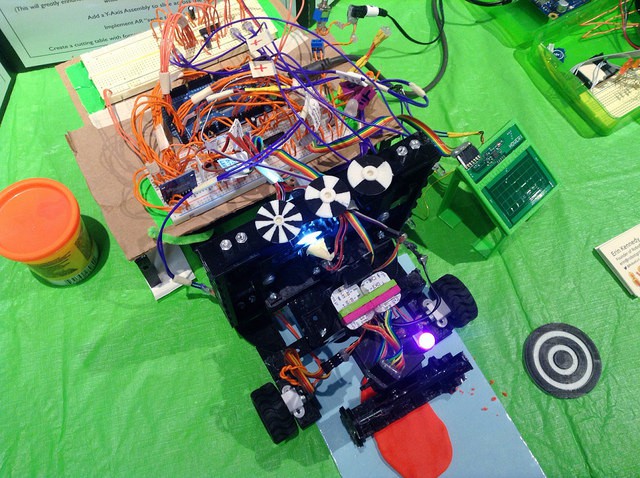 The robot was well received by older adults at Maker Faire Ottawa. There were also some kids who liked it, because they want it to slice the crusts off bread.

In the future, I want to explore two more places that this robot touches on: heating and the digitization of food.

Read more for the thoughts on this.

This is the larger goal for this project. If we can heat food as it is sliced, would the transfer of heat be more efficient than a skillet or microwave? What if it could be powered by a solar panel?

If you think about it, we do not really digitize our food (to quantify the data) that we eat very well. Usually it has to be done manually, and typing in each meal can become a boring task.

We can use the augmented reality tracking idea, combined with computer vision blob detection, to determine the size of the food.

If we add sensors to the end effector to detect when it touches the plate, then the z-axis encoder could count how far it has traveled, resulting in the thickness of the food.

What other ways can we figure out what food is being cut? We could use AI to assist in the prediction of what is being sliced given the time of day (ie, you’re most likely not eating steak in the morning).

Perhaps there could be a capacitance sensor as well. With all of these data points, it would be neat to try to train a program to suggest various food products that could be cut.

The future will be really fun.

I’m not sure what my plans for the future of AFSR are just yet.

The robot could be vastly improved if there were more powerful motors. The ones we are using are just ones we found in our box. Need more money. :\

If you have been following the progress of the robot, thanks a bunch!

Be kind to robots!
-EK