While fixing issues with some wobble in my Y axis, I noticed an issue with the wiring that will cause many problems with the heated bed. I has seen on my prints that there always was a bit of slop in the layer alignment, especially in the Y axis (front to back). Nothing really that serious, but enough to be annoying. I thought it was probably due to the way the belt is attached to the bed, or something in the drive pulleys under the bed. I was going to look at it eventually, but I believe I discovered the cause of the error while I was working on a different modification I was doing. 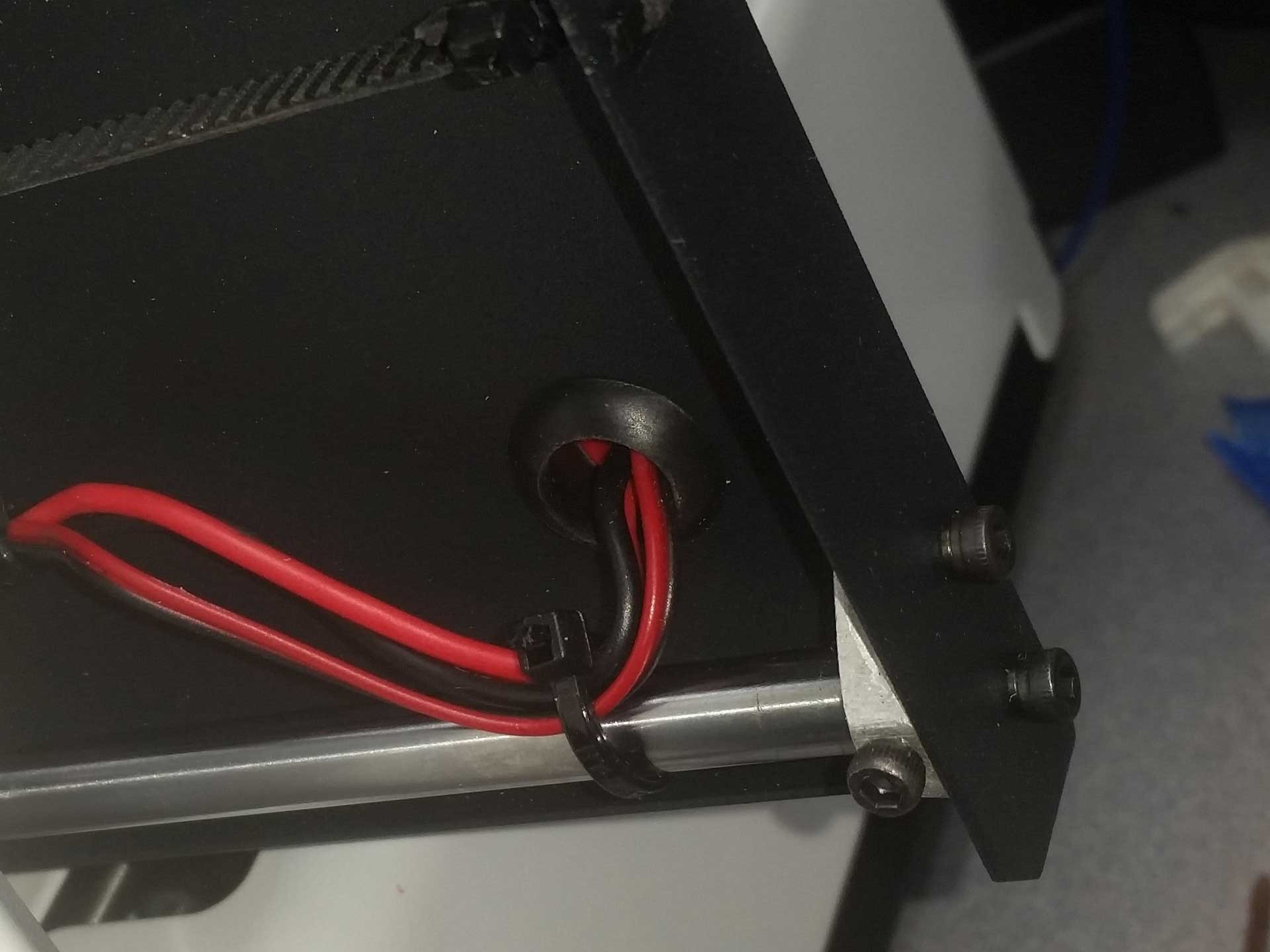 Check out the video below and see if you can spot the issue before I explain it and discuss my solution.


As you can see in the clip above, the way the wiring for the heated bed is placed under the bed, as the bed moves back and forth, the wiring rubs on the belt and actually deflects the belt a couple of millimeters as it makes contact. The belt deflection in this way, is certainly causing the bed to shift slightly font to back as the belt tension changes. Fixing this issue can only make things better. This is certainly going to damage the headed bed sensor or heater wires, as them move back and forth.

I was able to shift the position of the wires under the bed a little and get them to stop wobbling the bed, but after many prints the heater began to heat only intermittently, and it would stop heating if I pushed it all the way to the rear. Eventually it stopped heating, and I thought perhaps the wiring was coming loose from the movement under the bed. I used the printer without the heated bed for some time but then the bed temperature sensor started to report crazy values while printing. 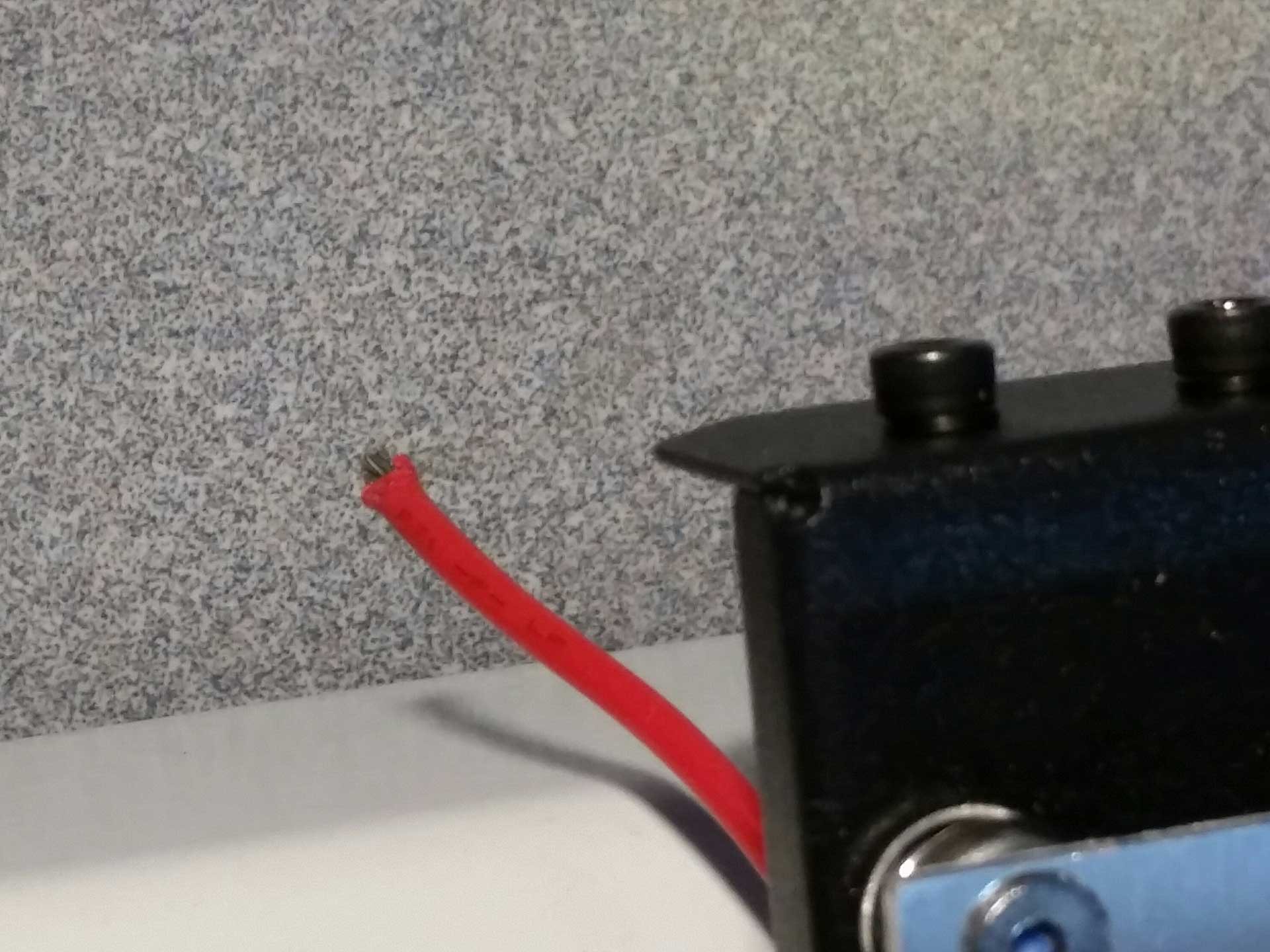 I was pretty sure it was the wires under the bed getting damaged from the motion. When I investigated the problem, I ran into an obvious broken wire under the bed. The thinner wires going to the thermistor were not visibly broken, but under the insulation the wires were failing and I could make the temperature on the screen change to crazy numbers by shifting the thin wires around. It looks like I would have to replace the wiring on the heated bed. But how would I correct the issue? 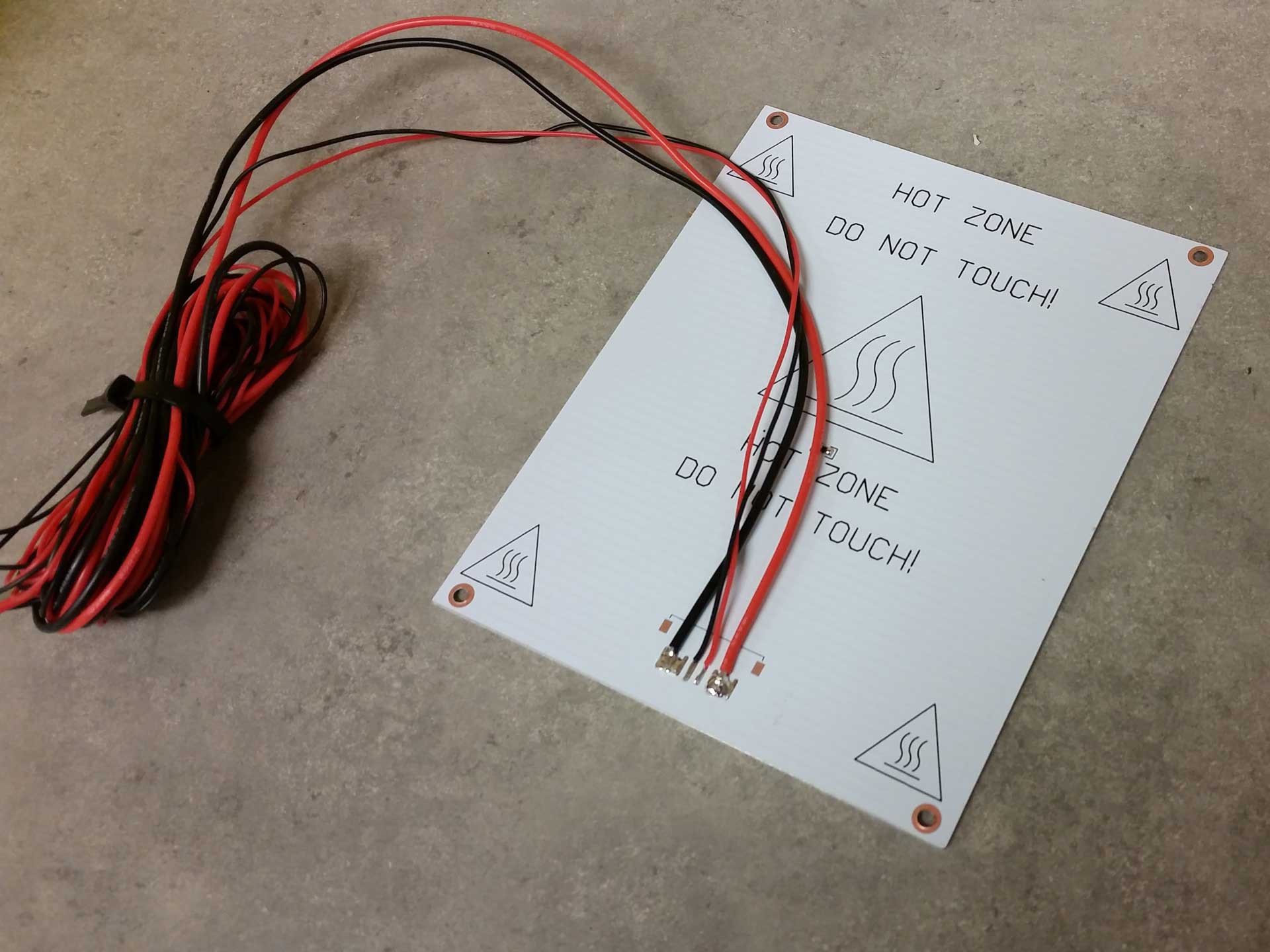 My solution was to replace the heated bed wiring with better quality wiring and route it so that there would be no stress on the wires and no interference with any of the moving parts. For the wiring, I chose to use silicone jacketed wire which I had on hand for my rocket and quadrotor experiments, which I purchased in bulk from Hobbyking. I probably only used a dollar or so of the wire if I were to buy it separately.

While I was in there, I also reflowed the thermistor with some lead solder I had on hand. No-lead solder is notorious for being brittle, and other people have reported that their thermistors fail from heat expansion/contraction cycles of the board, or from flexing the board during print removal. By flowing the joints with more flexible lead solder, I hope to prevent any of these issues on my heated bed. I applied liberal amounts of Kapton Tape to make sure nothing would ever short out, or pull loose. I also dressed up the wires with more of the cable sleeve I salvaged from a discarded PC a while back. It dresses up the wiring, and probably helps with strain relief of the moving wires. 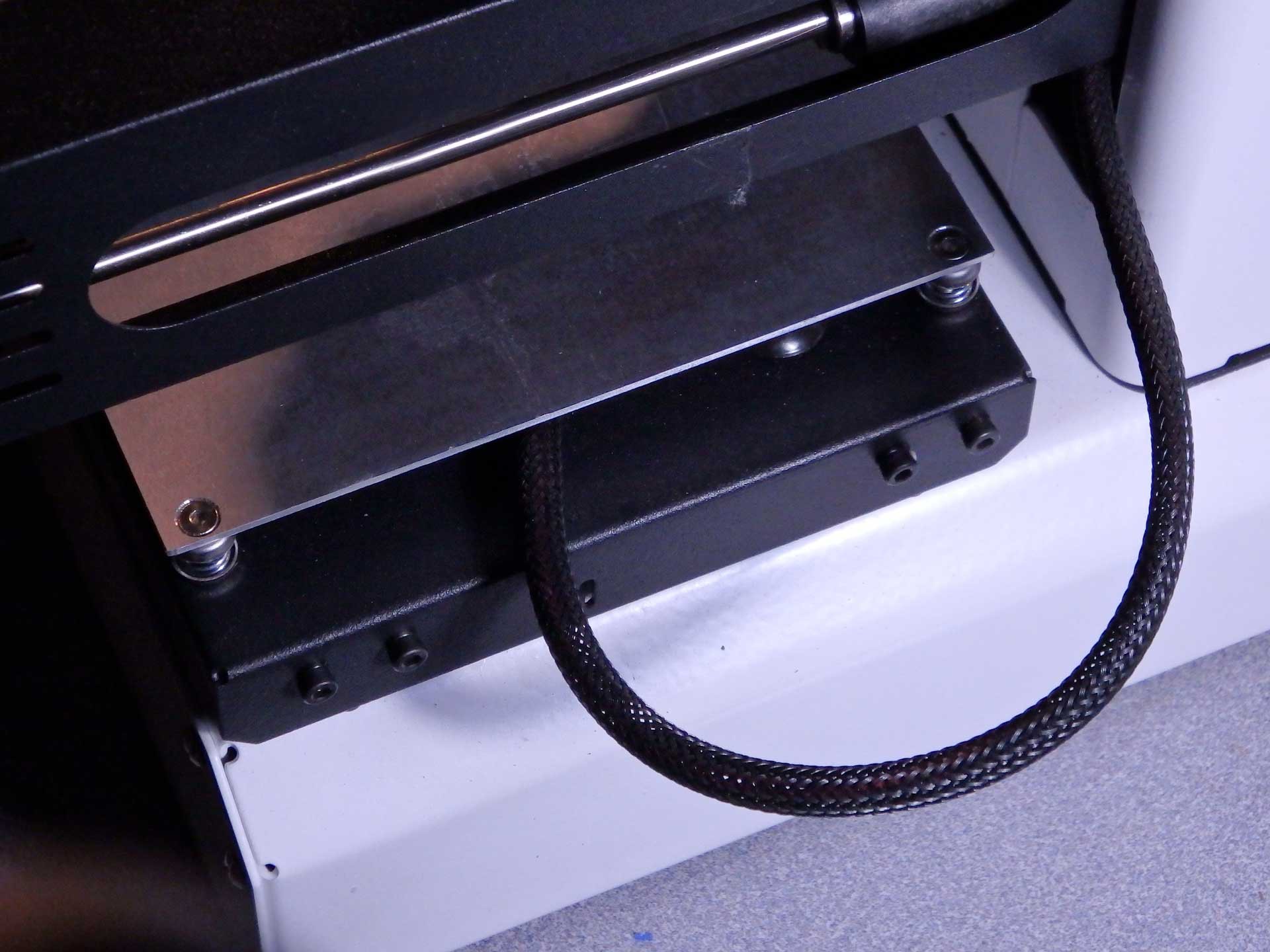 To solve the original Y-axis belt rubbing problem, I re-routed the heated bed wiring through the slot in the Z-axis tower. The gantry never lowered enough to interfere with the wiring, and the new cable routing solved all the issues with the belt. The wire actually moves very little ones it is not confined under the bed. This wire configuration should be standard on the Mini. I think I would like to design a printed cable attachment point to one of the screws that attaches the rod ends to the bed tray. Right now the kapton taps is really the only thing that secures the wiring to the bottom of the bed.

Watch this space for an update when I have the printed part designed and test fit.

What to do if you're not a fan of constantly running fans?

Thanks for sharing this! I was wondering if I just had to live with the "Y-axis wobble." Deflection of the belt by the wires seems like the clear culprit, but to what extent does your fix alleviate the problem?

That would be nice if you specify a few things, like, how you drill the hole, what diameter it is needed, what kind of sleeve have you used ( I guess Nylon Wire Sleeve but I dont know ), how you done with the JST XR2 pin and connector, etc, thanks in advance!