Since our cardboard construction kits are designed primarily to facilitate robotics projects, special care has been taken in our designs to allow the integration of electronics into designs.

Some sample projects created by our staff during a training session.

At the moment, most of our facilitation is focused on actuators, since they require the most precision in placement to function properly. Our chassis box, end squares, and head boxes all feature slots for SG90 servo motors, and the chassis box also has two slots for DC motors. We recently began experimenting with S0090D continuous rotation servo motors. In addition to recreating the functionality of a DC motor with greater control, the S0090D has the benefit of being almost physically identical to the SG90. We’ll likely move towards removing the DC motor facilitation and using a single “motor” slot within our designs.

Left: SG90 servo motor. Right: S0090D continuous rotation servo.
As the range of our educational programs using the cardboard robot kits expands to feature longer and more complex programs (such as STEAMLabs’ five-day summer camps), we hope to include facilitation for a range of sensors and outputs beyond actuators.

Most recently, we added a partially cut outline for the “eyes” of a Parallax Ping ultrasonic sensor to our head box design. Ping sensors often suffer because they require a rigid structure in order to maintain a consistent scanning direction, but gluing them to a plywood box limits their ability to scan their surroundings. A head box mounted on a spinning servo can provide a Ping with both rigid structure and rotational mobility. This opens up a range of possibilities for future projects.

We recently had the opportunity to test the accessibility of our system for users new to electronics.

This past Thursday, May 31st, the City of Toronto launched its first annual Digital Literacy Day (DLD) in collaboration with thirty five local companies. As one of the participating organizations, STEAMLabs hosted free morning and afternoon classes at three separate locations concurrently (with around 90 children ages 10-11 participating), as well as a display at the Toronto Reference Library. 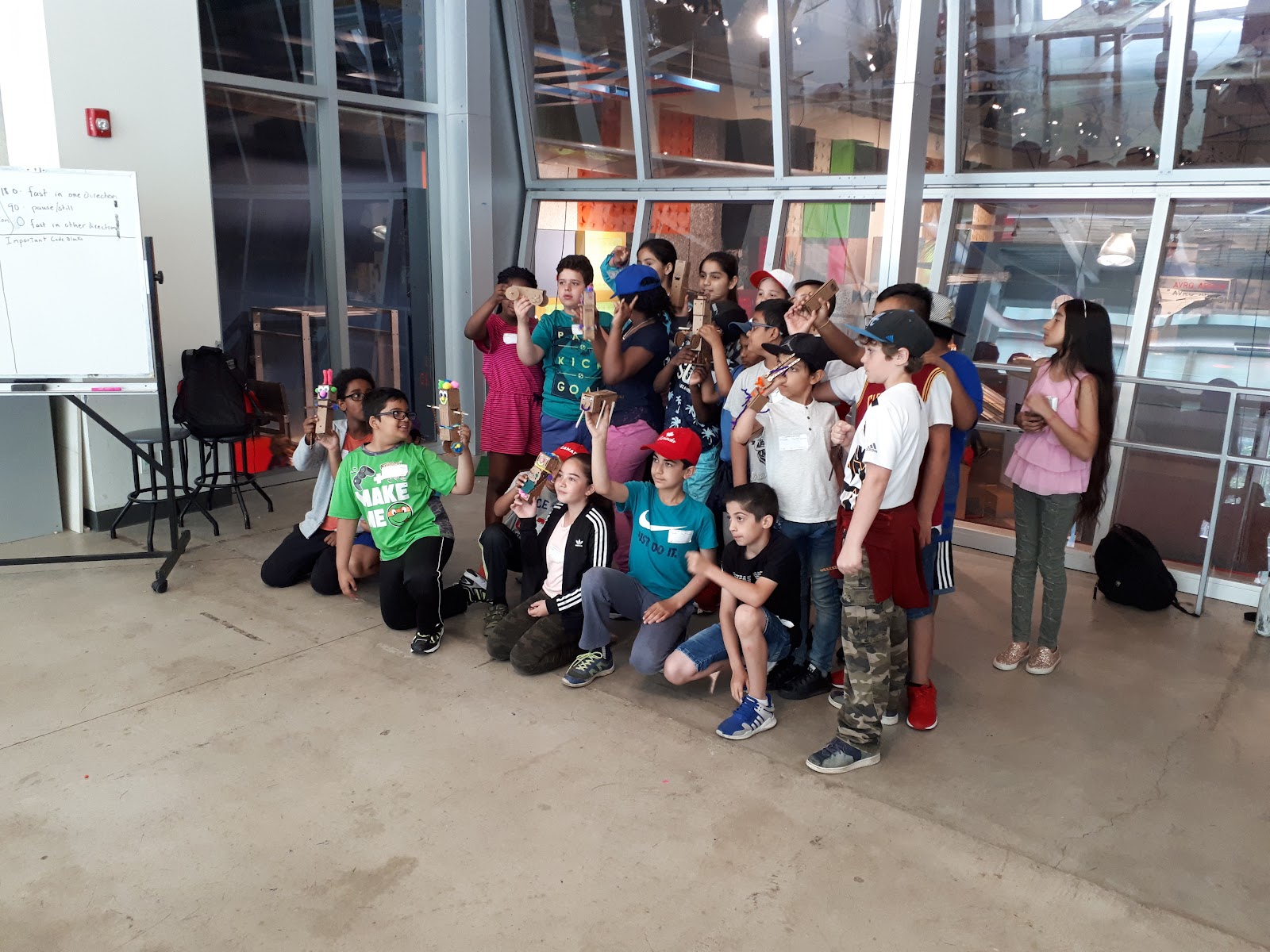 Students from Grenoble Public School posing with their creations at the Ontario Science Centre.

Participants were placed in groups of two or three and given a small kit of our cardboard robot parts, an Adafruit Circuit Playground Express (CPX) microcontroller, a few continuous and regular servo motors, various connective wires, and a laptop connected to the online coding site makecode.com. Participants were shown some basic examples, told how the electronics fit into the cardboard parts, and instructed to build whatever robotic creation they wanted as a group. They were given 90 minutes to do so.

While we’re still debriefing our instructors, their initial reports indicate that the participants’ creations at all three locations were very impressive in both complexity and variety. Despite limited time and a lack of prior experience, participants used their parts to create mechanical people, animals, vehicles, structures, and wearables. Within one class I saw a mechanical wolf head (that bit and growled), shout-activated one-wheel drive cars, a wailing ambulance (that, of course, remained continually active), a timer-controlled jack-in-the-box, robots that danced, robots that boxed, and an arm bracer that would deploy one of two tools with the press of a button.

With only a brief explanation, participants were able to quickly assemble a structure out of the cardboard parts, place their electronics within it, and then focus on programming the microcontroller and testing its outputs. If an issue arose, they could easily swap the position or orientation of parts and continue coding.

As we move forward, we’ll be working to make our cardboard kits more intuitive and the integration of electronic parts even easier.