I have not charged the battery since 12 days, which means the setup is working. I have measured the output voltages a bit and noticed at around 8 am is enough sunlight for the DCDC converter to get started, but since the voltage drops when load is connected the 7 V base output drop down to under 4 V and DCDC fails to start. By simply unplugging and replugging the solarpanel the DCDC starts working. At around 9 am the power generated is enough so the DCDC starts on its own, but we are wasting an hour of sunlight here. During summer this can be ignored, but not during winter. So ideally I would need something like a switch or a timer which unplugs everything regularly if not enough power is outputted at the 5 V line.

I also tried to direct the solarpower directly to the board when it is not enough for DCDC. With the help of our community (https://hackaday.io/page/6055-need-some-help-with-dcdc-converters)

I had the following idea: 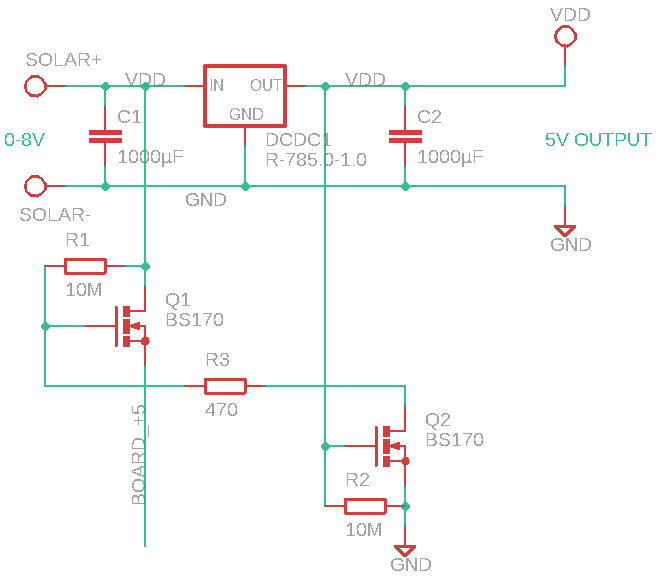 When the DCDC outputs 5 V the MOSFETS opens and pulls the the Q1 MOSFET to ground and thus closing it, when no power is there the gate is pulled high and thus the mosfet is open. This setup is basically a P-Type depletion mode MOSFET, but build with N-Type enhancing MOSFETS since the P DMOSFTES and rare and pricey.
The circuit works, but not very good. The solarinput I get is around 4 V, but the output of Q1 is only about 2.2V and it outputs near zero current, so this is not really what I wanted at all.
If I can find a good low power be state relay, I will test that but until then I would leave the solar power part as it is.

Lowering Standby Energy
I did not yet decide if I want to use an SD card or an F-RAM chip. FRAM is build for low-power but I can not read it myself. And SD needs more power but I can confirm the data with my PC. Most likely the FRAM chip is more easy to implement since it is just an SPI connection where I write & read some bits into some registers.

The Watering Mechanism
Something I kind of avoided this far is the actual watering of the plant. Currently the system is a WIFI connected thermometer but nothing really more. The thing I have to keep in mind are:

Honestly I have no Idea how I can achieve all of the above points, I am good with software but not with mechanical engineering. A pump will most likely need way to much energy. This means the tank need to be already above the plant, gravity can do the rest.

The Power went out