Restoration, modification and documentation of this odd little lathe/mill/grinder/etc

The lathe arrived home very well packaged, opening all those boxes inside of other boxes that contained the different parts of the machine was like Christmas. I could not contain myself, I had to make some chips. So I proceeded to haphazardly put all the main parts together on the floor and flipped the switch on. 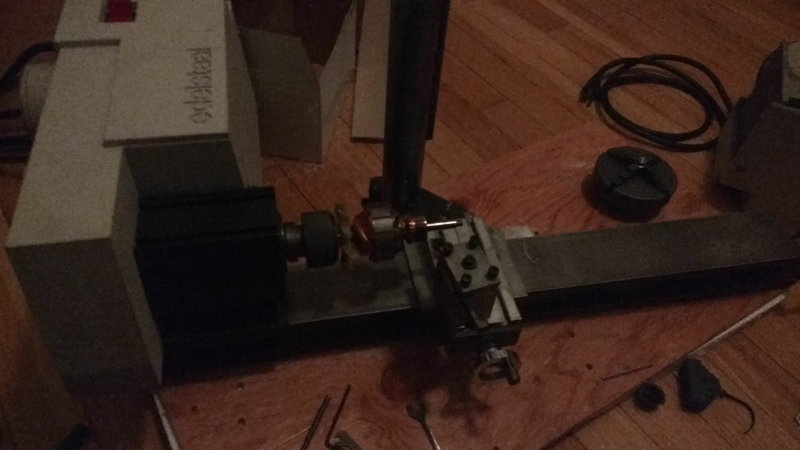 The lathe ran pretty well, I did a skim cut to the rotor commutator in the picture (from a very chewed up blender), and cut some aluminum and plastic. The cast iron frame of the machine felt pretty sturdy and it could take reasonable chip loads without chattering too much, considering that the ways haven't been properly adjusted or even lubricated yet...

After I had my 15 minutes of fun it was time to take it all back apart in order to give it the maintenance it deserves. First issue I noticed was a rubbing sound coming from the headstock, after looking carefully I found that the axle that holds the intermediate pulleys between the motor and the spindle were severely crooked.

I rotated the pulley by hand and to my relief, the shaft was not bent, the pulleys stayed at the same angle during the entire revolution. I took the thing apart and I found the usual suspect.

The sleeve bearings were worn almost through, the holes severely deformed into egg shapes. Luckily these bushings are a standard part, "Oilite" plain bearings for 3/8" shaft, 1/2" bore and 1/2" long. The installed bearing had a flange 5/8" in diameter, but I saw that the counterbore in the casting could accept a larger flange, so I bought a few with a 11/16" flange from McMaster Carr, part number 6338k415. The old bearings came out pretty easily when persuaded by a pair of channel lock pliers

I also polished the shaft, which got a bit grooved from the wear, but cleaned up reasonably well. The new bushings went in almost a bit too easy, but ended up solid in place.

Another little detail on the assembly was a pair of Oilite thrust washers between each pulley and their corresponding sleeve bearing, I'm not sure having both bearing sides be sintered bronze is the best idea from a durability standpoint, it is usually best when you have a hard material like steel bearing on the bronze with the oil film in between. Since the spacing was needed to keep the pulleys aligned I lapped a pair of steel washers flat so that they would have a flat and even bearing surface against the flange of the bushing.

It all runs nicely when spun in the bearing holder, but when trying to assemble the entire thing I found that the pulleys don't align correctly with one washer at either side, it did seem strange when I disassembled this both Oilite washers were only on the motor side of the axle. I think this will call for custom spacers later on, but I need a running spindle for that! This will do for now.