A PCB, CNC routed such that it becomes foldable while preserving the traces on the top side.

Some time after I finished my Polyhedrone LED ball, with a diameter of about 32cm, a friend of mine asked if I could make a small one, for on a necklace.

This started me thinking. Using separate facets would become very fiddly very soon at such small scales. But what if I could make the ball out of one PCB bend it into shape?

In order to accomplish this, I designed a PCB, essentially an LED strip on an unfolded half of a deltoidal-hexacontahedron.  I used SK6812-3535 LEDs, which are compatible with the ubiquitous WS2812b chips, but smaller.

Instead of sending the PCB edges to DirtyPCBs, I ordered square PCBs instead, and milled the board myself, using the CNC mill at Frack. Additionally, I carefully milled along the fold-lines of the polyhedron from the back, drilling through (most of) the board, but leaving the copper on top intact.

The milling tolerances are quite low, with the difference between a foldable board and a broken one being about .1mm

The board at this point is quite fragile, luckily, Isopropanol quickly takes care of the double-sided tape used to keep it in place during milling.

To solder the LEDs, I used a cheap electric cooking plate as hotplate.

This is the moment of truth. It's time to fold, and use hot-glue on the inside to make it stay in shape:.

To drive the ball I designed a small (13x13mm) pcb containing an attiny85 and a lipo-charging circuit and 6 pads (without holes) for an AVR isp-6 header on the backside.

A P-Mosfet is used to allow the attiny85 to switch off the VCC line to the LEDs, mainly as a precaution to prevent a large static current draw when the lipo is nearly empty.

The test setup, drawing power from a lipo battery, running AVR code to perform gamma-corrected temporal dithering at 8MHz.  The temporal dithering idea I borrowed from Scanlime's Fadecandy. It is pretty essential since I only drive the LEDs with brightness values [0..15], otherwise it's just too bright.

A 3D-printed base from DirtyPCBs' SLA service with room for a 7x3mm toggle switch and a tiny battery.

Final result: a tiny ball with a diameter of about 28mm. 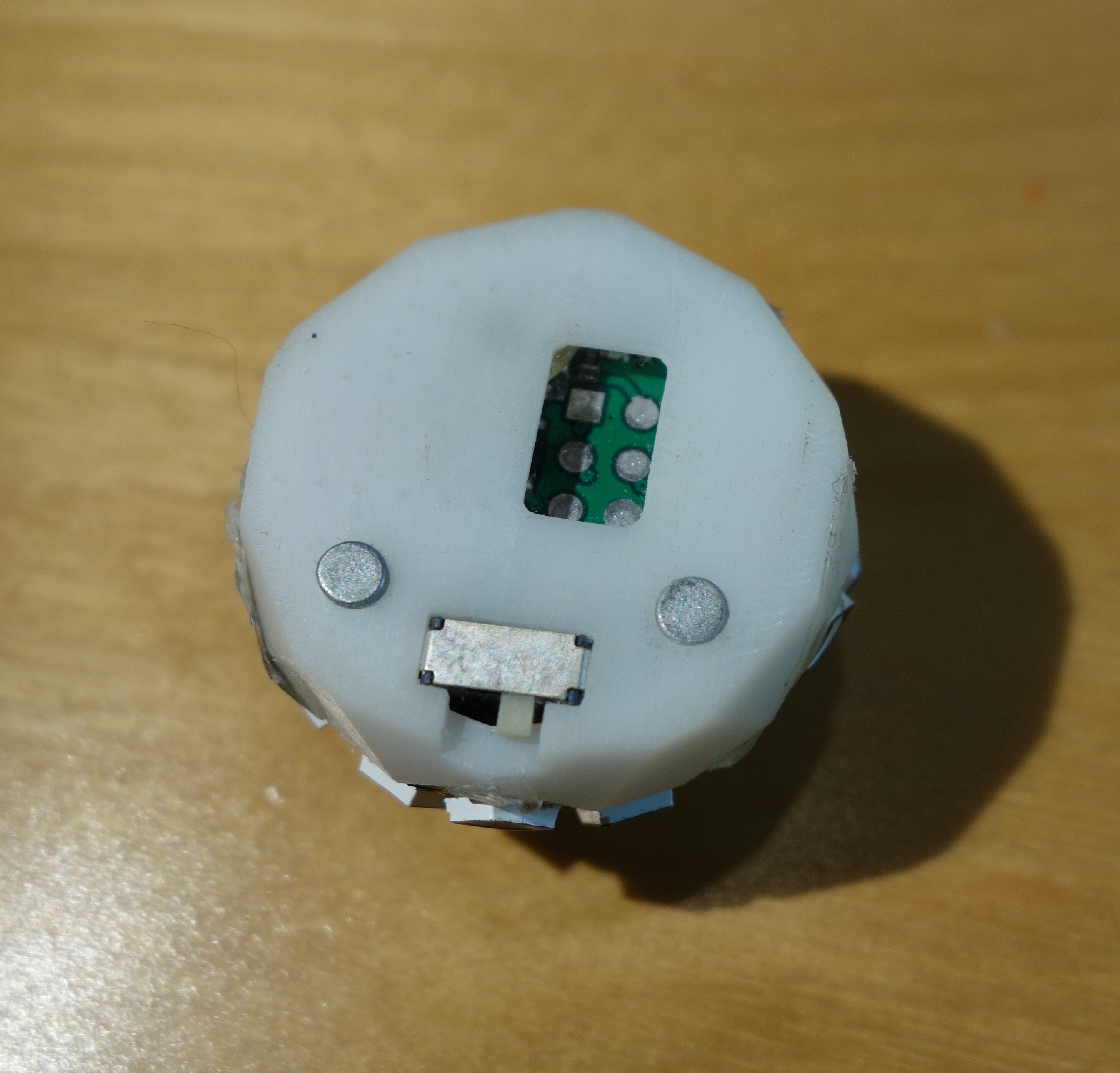 For my 2nd iteration I went for the slightly smaller SK6805-2427 LEDs, which allowed me to shrink the folded ball's diameter to 20mm, and about 22mm including LEDs.

For the design I made use of  inkscape's clone tool, and it's grouping functionality. By using clone to keep common elements, like the footprint and the facet outline the same across all facets, it becomes easier to manage all different variations of facets connected together. In total, there are four different configurations of facet.

Having learned from version 1, this time I made sure the traces were as wide as possible, since too many of them broke during bending.

After combining all facets into simple shapes, and moving them into the right layers, I used my svgconvert script to convert them into a kicad module.

In addition to wider traces, I ordered double-thickness copper PCBs this time. Which helped quite a lot with the yield.

For the second version of my led driver PCB I took Travis Goodspeed's Goodwatch Project...

NIce! Your PCBs bend quite a bit further than I'd dare to bend mine.  Do you know how thick the copper copper layers are on your boards?

Yeah, it's 1oz copper. The 'regular' kind. I did however strengthen it with a layer of kapton tape. Kinda sorta cheating, I know!

Nice =) Thank you for sharing.

The unfolding is excellent! I was already impressed with the results, then you shrunk everything down with v2 and it got really crazy.

How did you come up with the unfolding pattern? Did you just start with one shape and then start copying that shape to align with a single edge?

Also, how did you decide to mill the bottom of the board for the folds and not the top? Is it stronger to fold into the milled area than to fold away from it?

For version 1's  unfolding pattern, I tried to pick a good trade-off between sturdiness and easy routing.  For version 2 I went for the most sturdy configuration I could think off.  Keeping as many long edges together helps with both.

The groupings of five facets come natural as this catalan solid is quite similar to a subdivided dodecahedron.  I used inkscape's guides to make all facets align correctly.

My original idea was to fill the folds on the inside with epoxy, so that's probably why I didn't think of bending it the other way.  In the end hotglue was sufficient.

Trammell got the idea to use a lasercutter instead, and found that in that case it more easily bends away from the cut. https://trmm.net/Catalan_PCB

This is a 8x8 WS2812b NeoPixel LED matrix that is completely flat surface and has the same 1.6mm height as a normal PCB
Project Owner Contributor