Now that we had settled on our motors and basic layout, it was time to construct the first prototype machine. 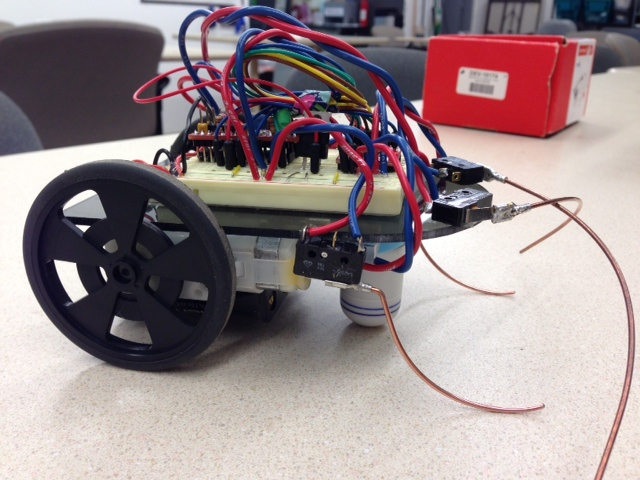 We decided to keep the electronics on the breadboard for the time being to make the inevitable changes and revisions easier. Simple microswitches with welding wire feelers provide obstacle detection up front, while a second pair feel the surface in front of the 'bot (now dubbed Johnny) to keep it from falling of the edge of a table, or down a flight of stairs if it's on the floor. If it senses something, it's programmed to stop, back up, and turn away from the obstacle before continuing on.  It worked...kinda. Johnny was rather inconsistant. After a few minutes, it would get stuck in one of it's behaviors. Running full speed into things, turning endless circles, and even things that we hadn't even programmed into it, like running full speed in reverse. Of the many possibilities, it was widely believed that the obstacle avoidance script was to blame. Our Fearless Leader freely admits that he is no programmer, and the code he came up with was admittedly half plagerized, half baked, and half finished. Johnny was handed over to Jenny Tong, the lead programmer, and Justin Conroy and Derek Bever also decided to jump in and try to straighten out the mess. While they were unraveling that mess, Greg concentrated on building Frankie, Johnny's twin brother.