This thing is flying!

If you want to find out more, read on!

Yes, it's another drone project, but still different!

This is a functional model showing a complete 3D designed and printed flying single rotor ball drone. The special design with only one rotor and air vanes for position control make this project particularly interesting in the area of drones.

How it all started:

In mid-2018 I completed my first quadcopter project with the goal of designing a own flight controller and expand the software, mainly to further and deeply deal with position algorithms. Additionally looking for new ideas for building drones,  a very rare case came across: a single-rotor drone with air vanes for control, which is based on the principle of "torque" of an RC model aircraft. This principle aroused my curiosity and it was clear to me: I would like build up something like this and get this thing flying!
First sketches emerged:

It doesn't work without electronics - luckily!

Design of the flight controller:

Testing of the new flight controller:

Once developed - it has to be tested. To keep things simple, a first test of the new flight controller took place on a standard 220mm 4X copter:

The first tests (and flights) went well ... This was the base to start with the further design and construction of the ball drone.

The idea behind the structure is to reach a low center of gravity with the battery underneath the rotor in order to not build an inverse pendulum. Furthermore, standardized components from the RC area had to be included in the planning (with the exception of the flight controller). The safety of the drone is an important aspect. Touching the rotor is made more difficult by a kind of ball-shaped cage, but the rotor can continue to rotate when the drone is pushed or flying against an obstacle.
In an early state of design, plates were used to control the air flow:

Everything was designed in FUSION360 and 3D printed:

The 3d printed parts were assembled with nylon screws for the first sample. 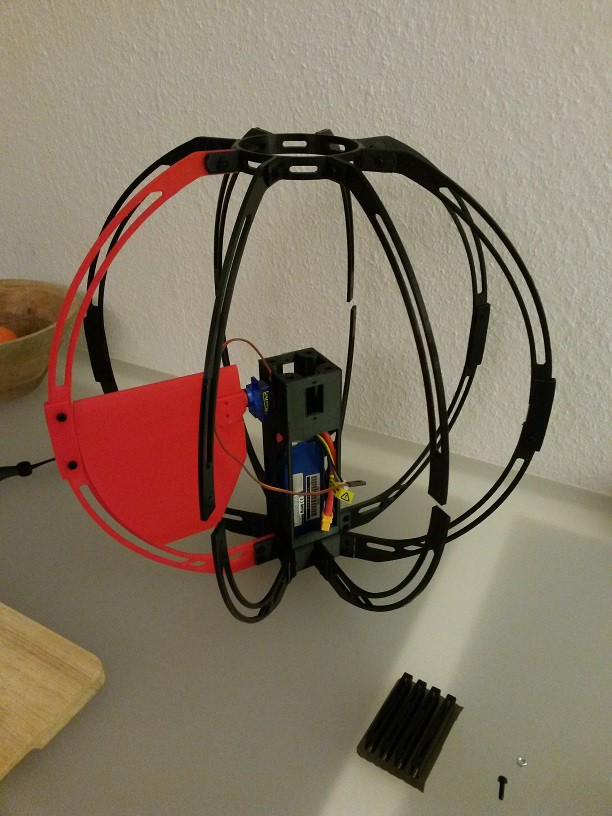 Control the hole thing and stop the jitter!

With the fully assembled first prototype, the expectations regarding the functions were accordingly high. Unfortunately, the wings, along with the rigidity of the construction and the servos used, began to tremble, known as servo-jitter. In addition, radial bearings were installed on the opposite side of the servos for support.

But there still was servo-jitter. In the end, the challenge could be met with a different air vanes resulting in smooth vanes movement.

This gives a more closer look at the build, showing the flight controller in place, the settings with air vanes as well as the ESC and motor mounted on top: