Along the way several concepts and areas for redesign were explored. This time, most of the sketches were done digitally. Here is a mosaic of all the sketches! 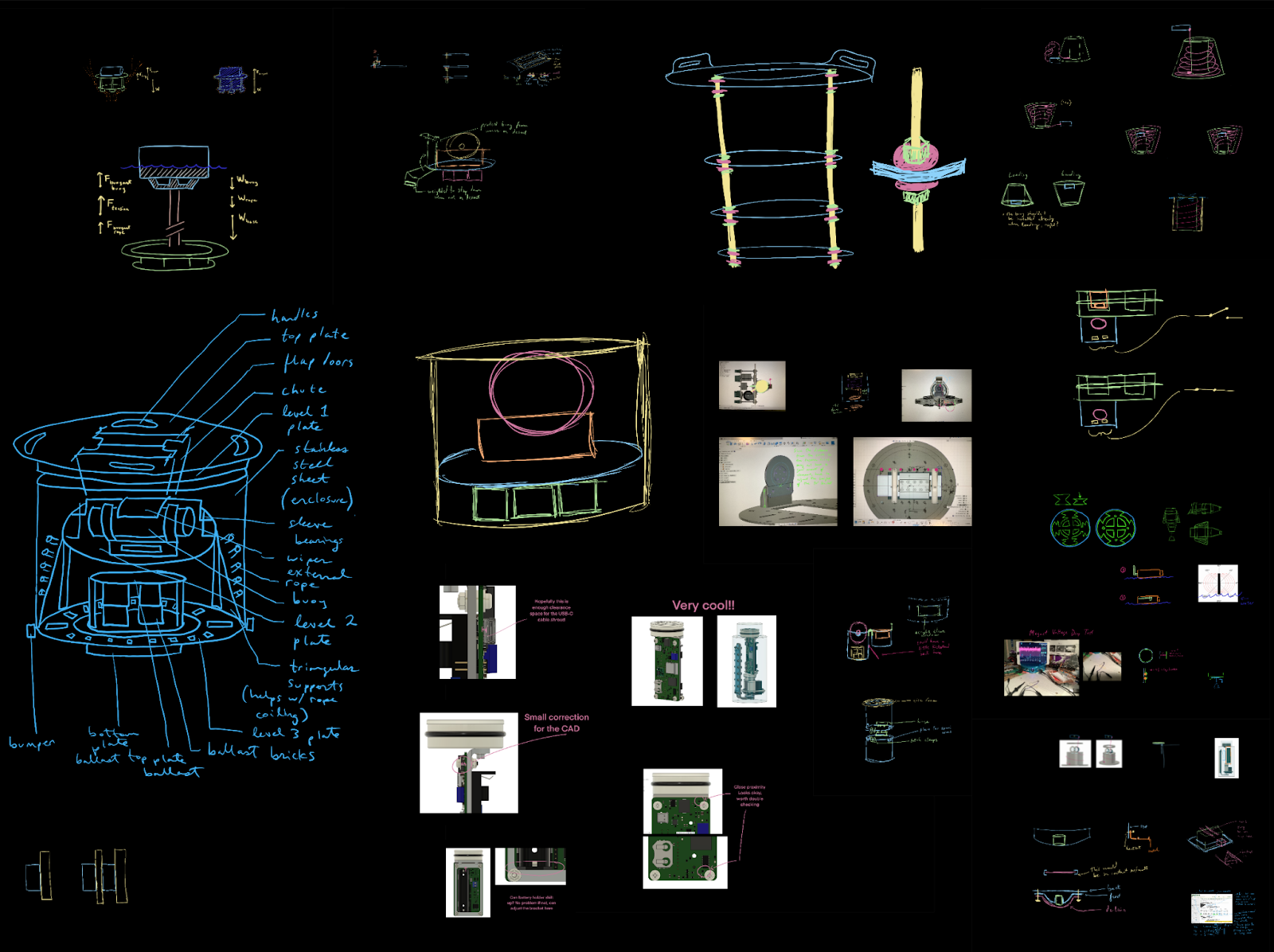 There were different stages during sketching. Here’s a summary collecting some of the thoughts. 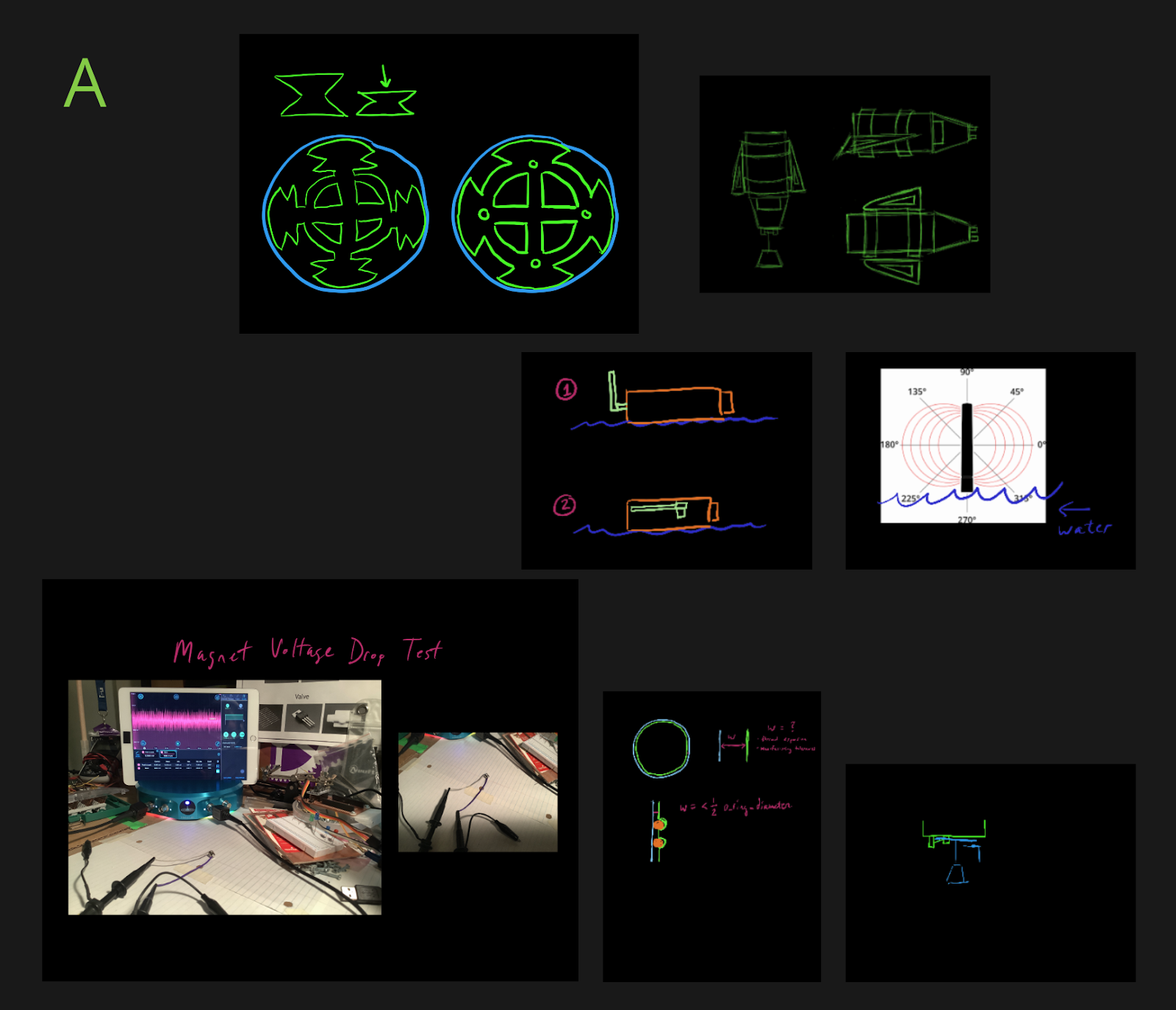 A: The beginning, getting oriented (see the buoy with different antenna orientations). Different ideas. 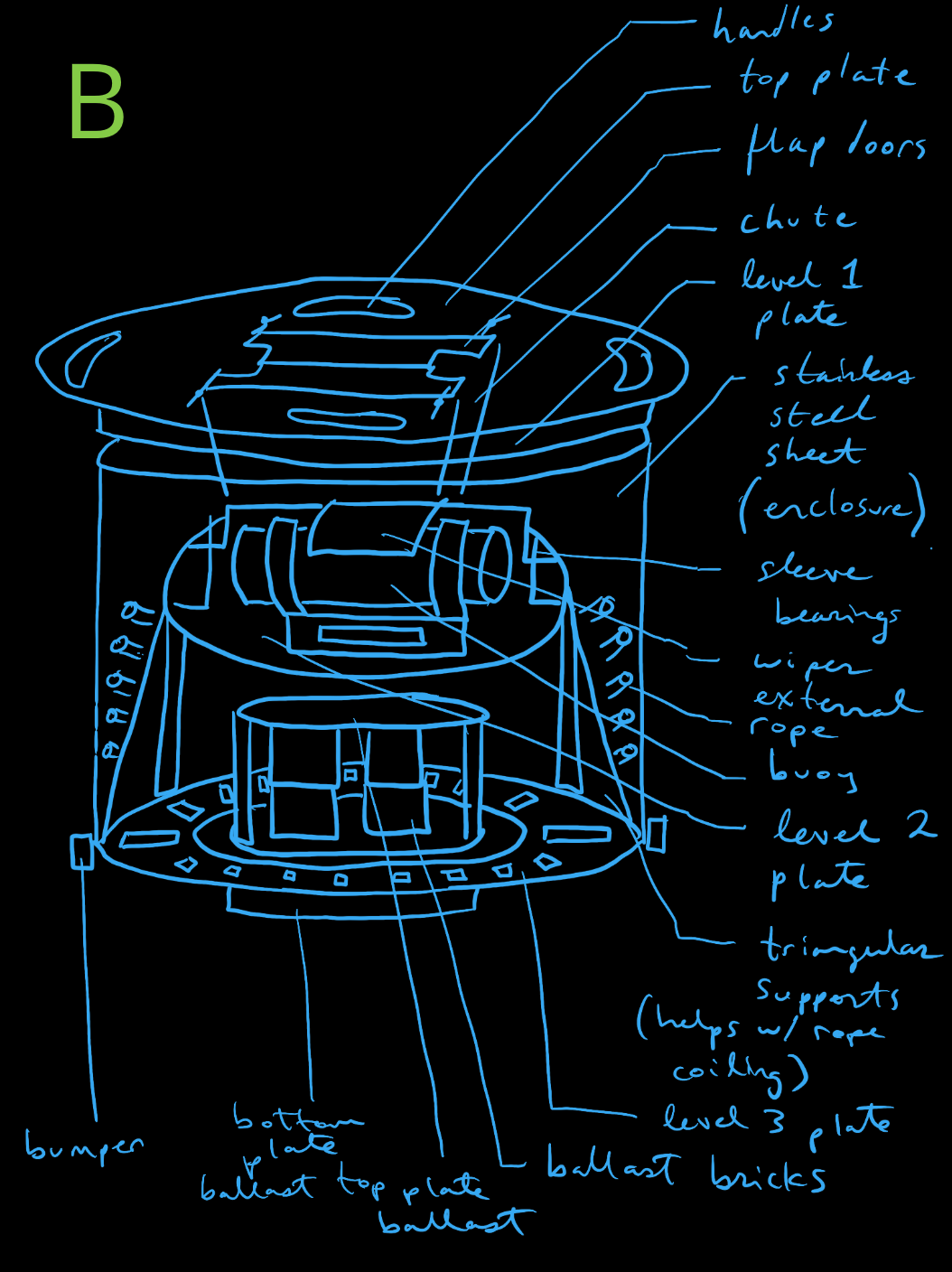 B: The somewhat finalized concept idea. This one had too many moving parts though. The commonality is the stacked stages. 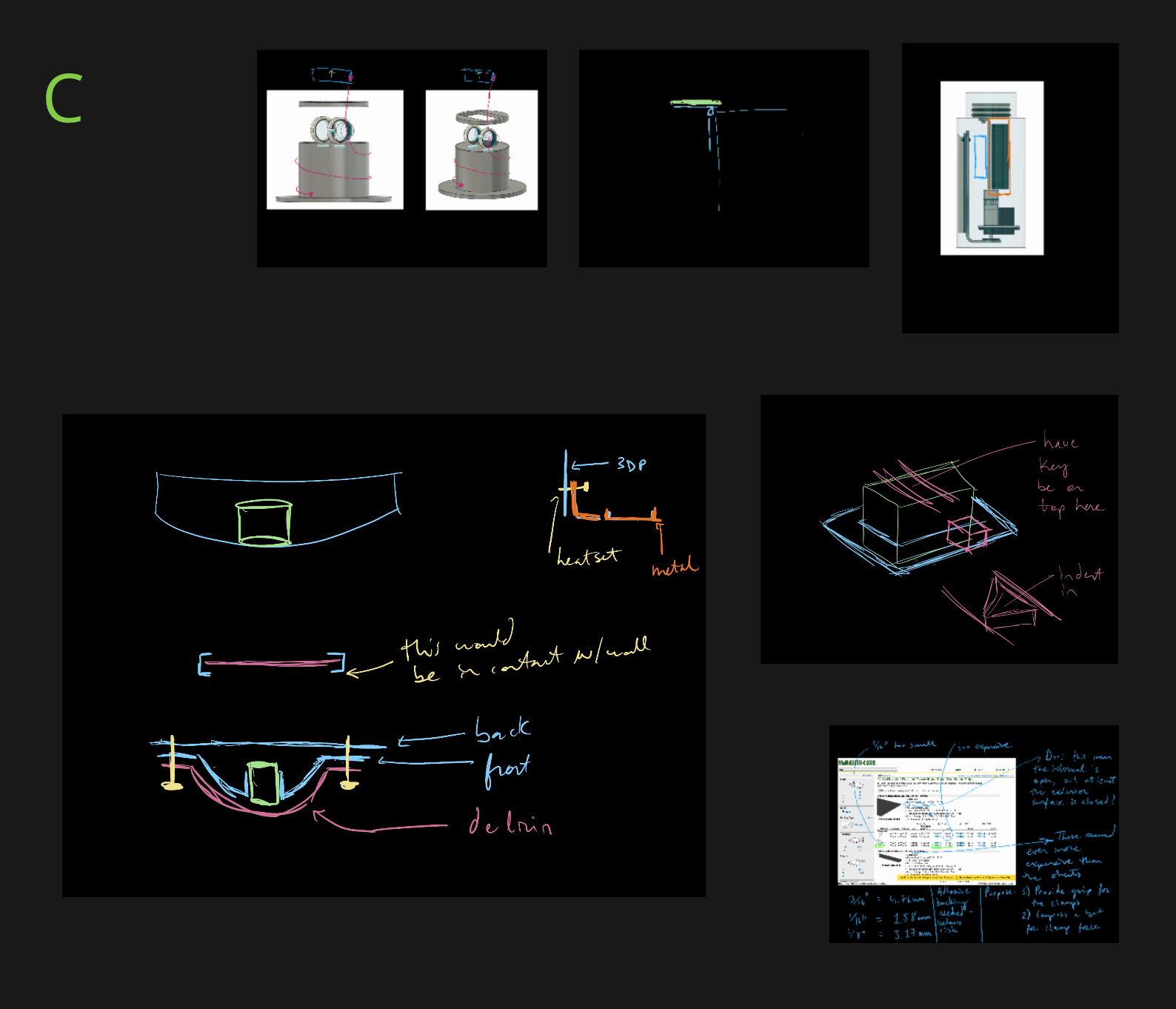 C: Wiper magnets being closer and with less friction with a thin delrin sheet. This idea was later scrapped since Giovanni came up with a great solution - two low-profile ‘rails’ that the wiper glides on - reducing scratches, minimizing contact area, and less materials! 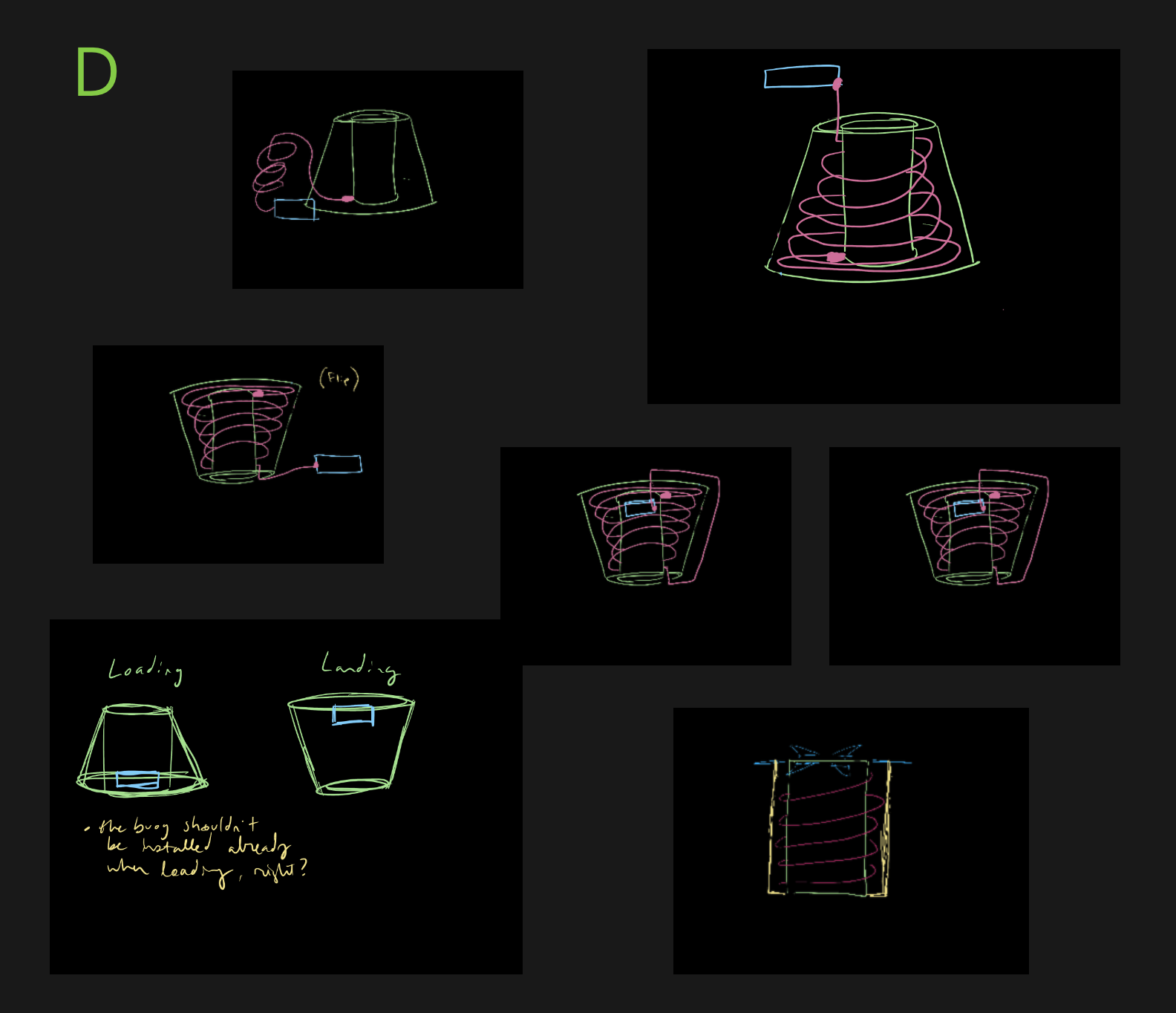 D: A lot of other ropeless fishing system designs use rope bags. What if there was a way to coil the rope? If it’s conical shaped, this would reduce tangling when coiling… however, if it is conical shaped, this means that the loading and landing orientation is 180 degrees flipped. This idea was scrapped because the centre of mass was at the top (for landing state, if it would even land like that). 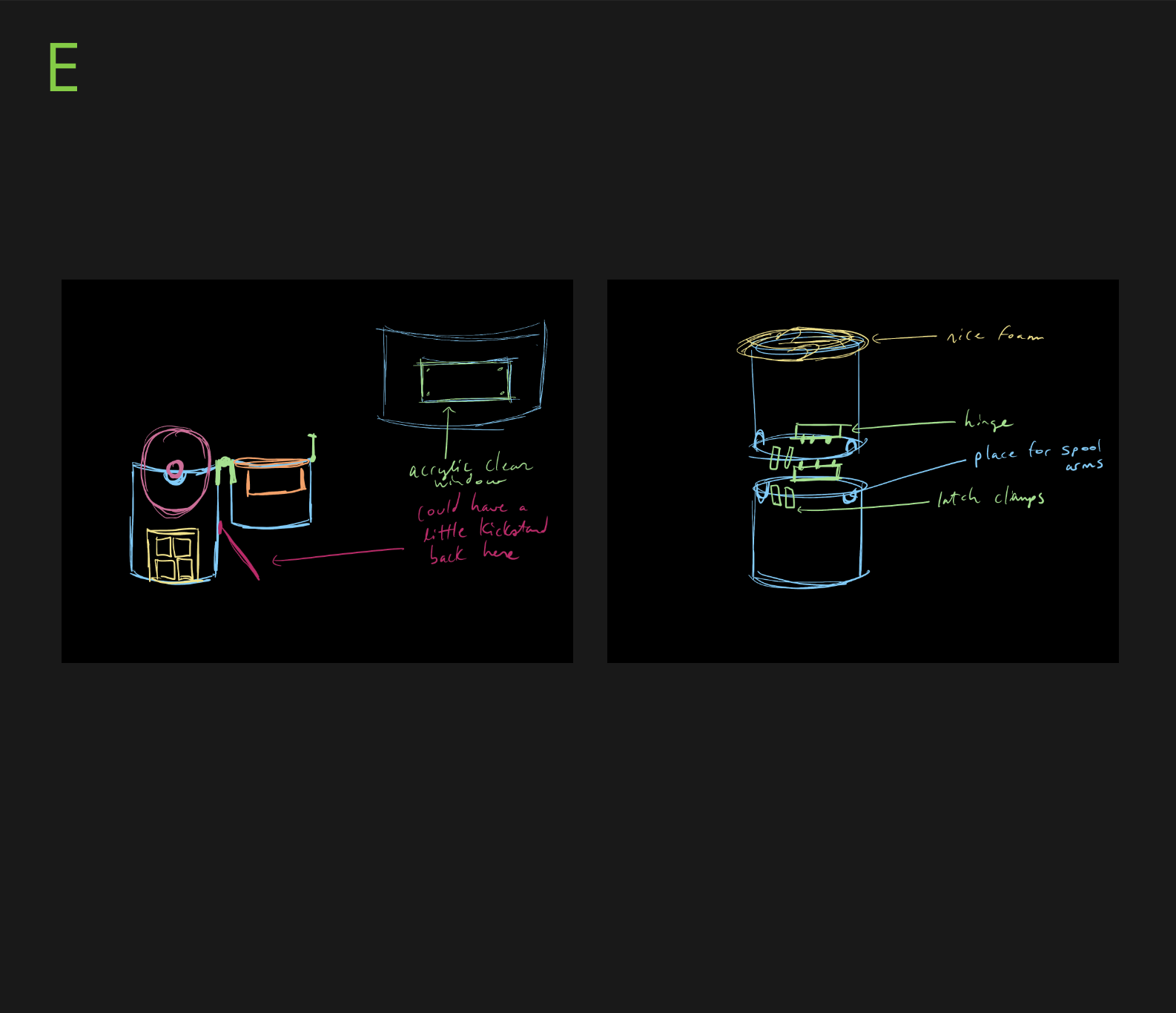 E: Here was another concept. It is a tube cut in half with latch clamps. This idea just didn’t work logistically, and it seems like it would be cumbersome to try to reload the spool afterwards. 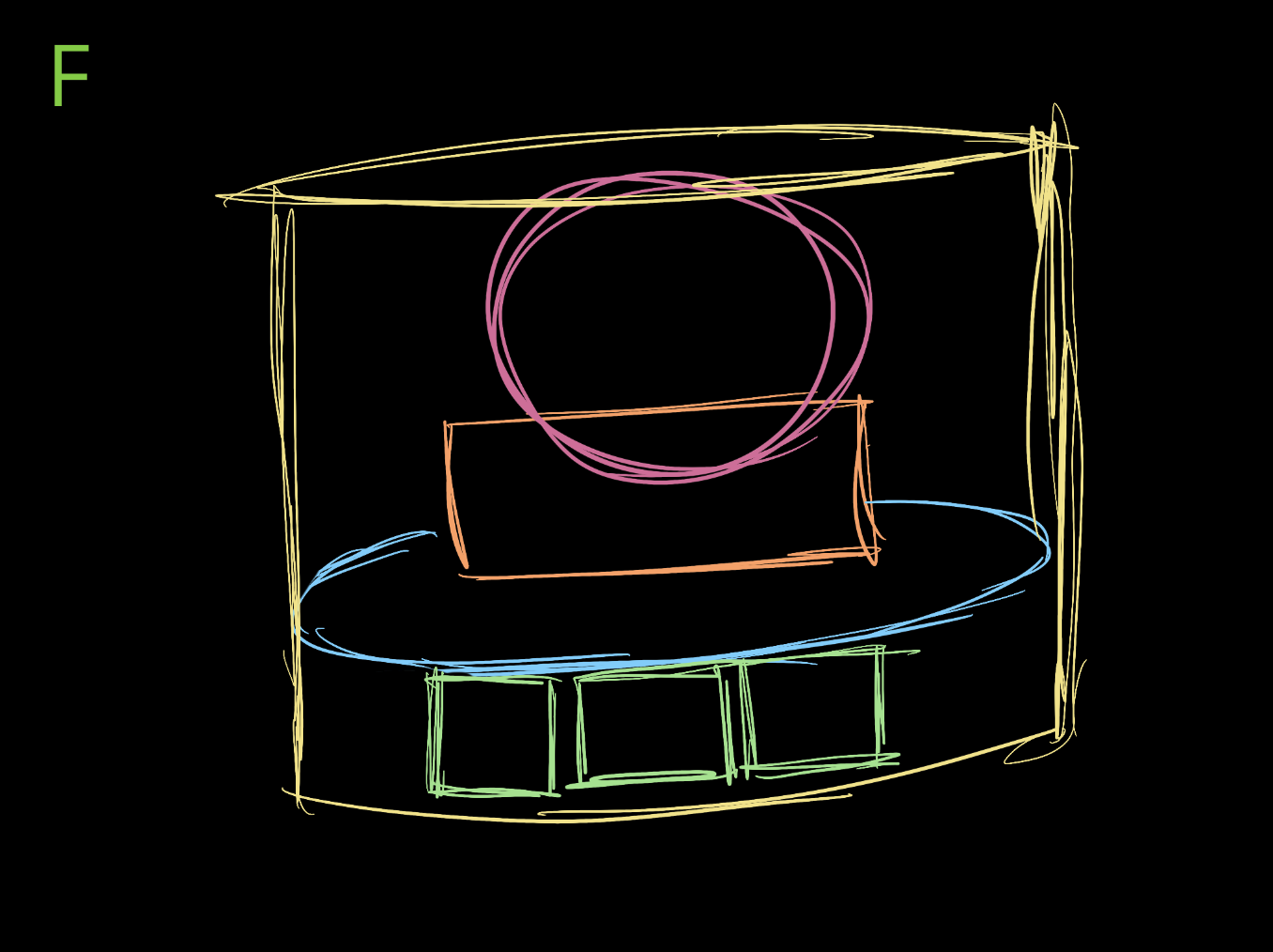 F: This is pretty well the final design, however the external enclosure (yellow lines) was excluded. 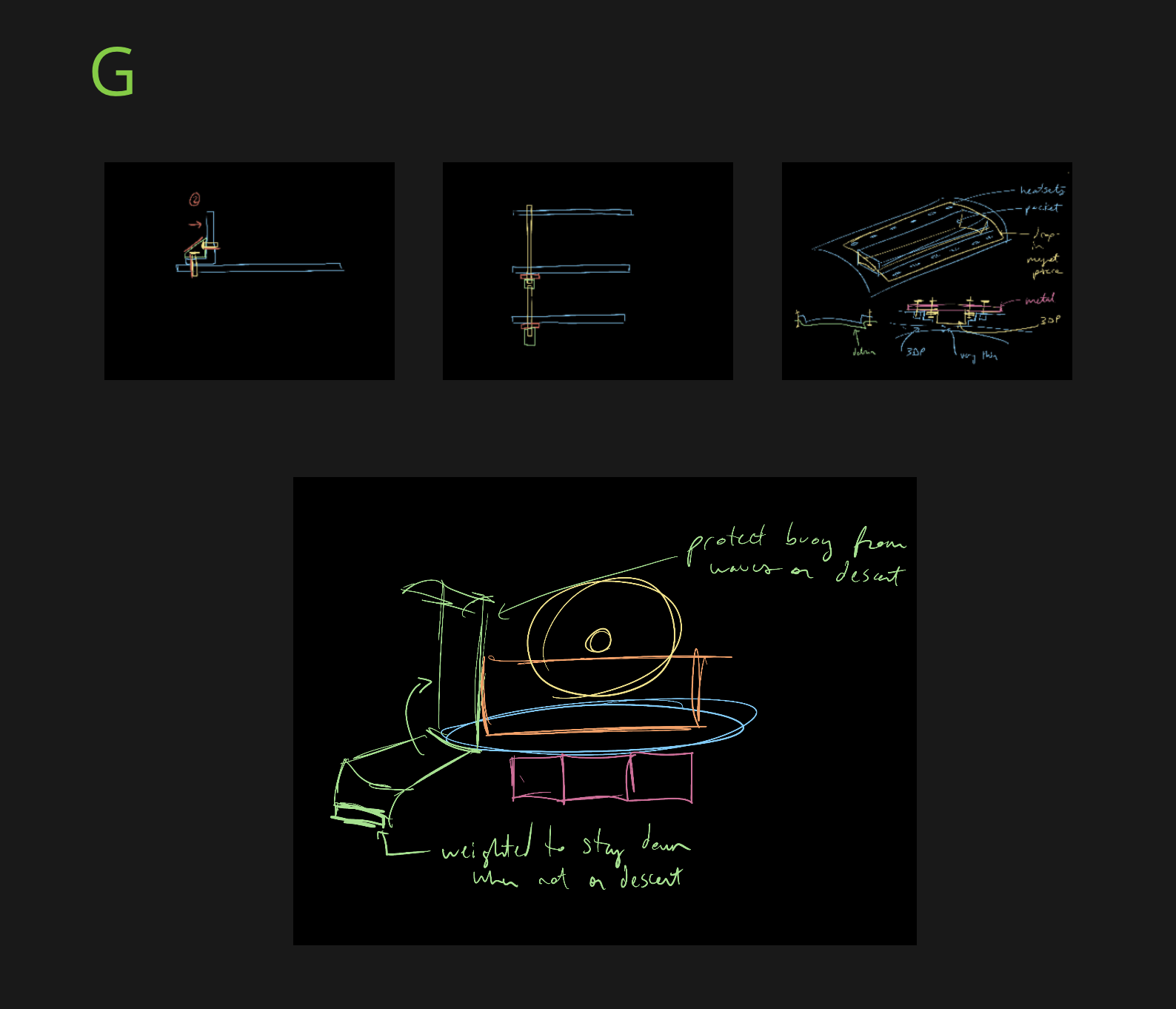 G: At the top right is the concept for the external wiper sub-assembly. The sketch in the middle played with an idea where there would be “flappy wings” on the side to help protect the buoy from waves. This wasn’t needed… 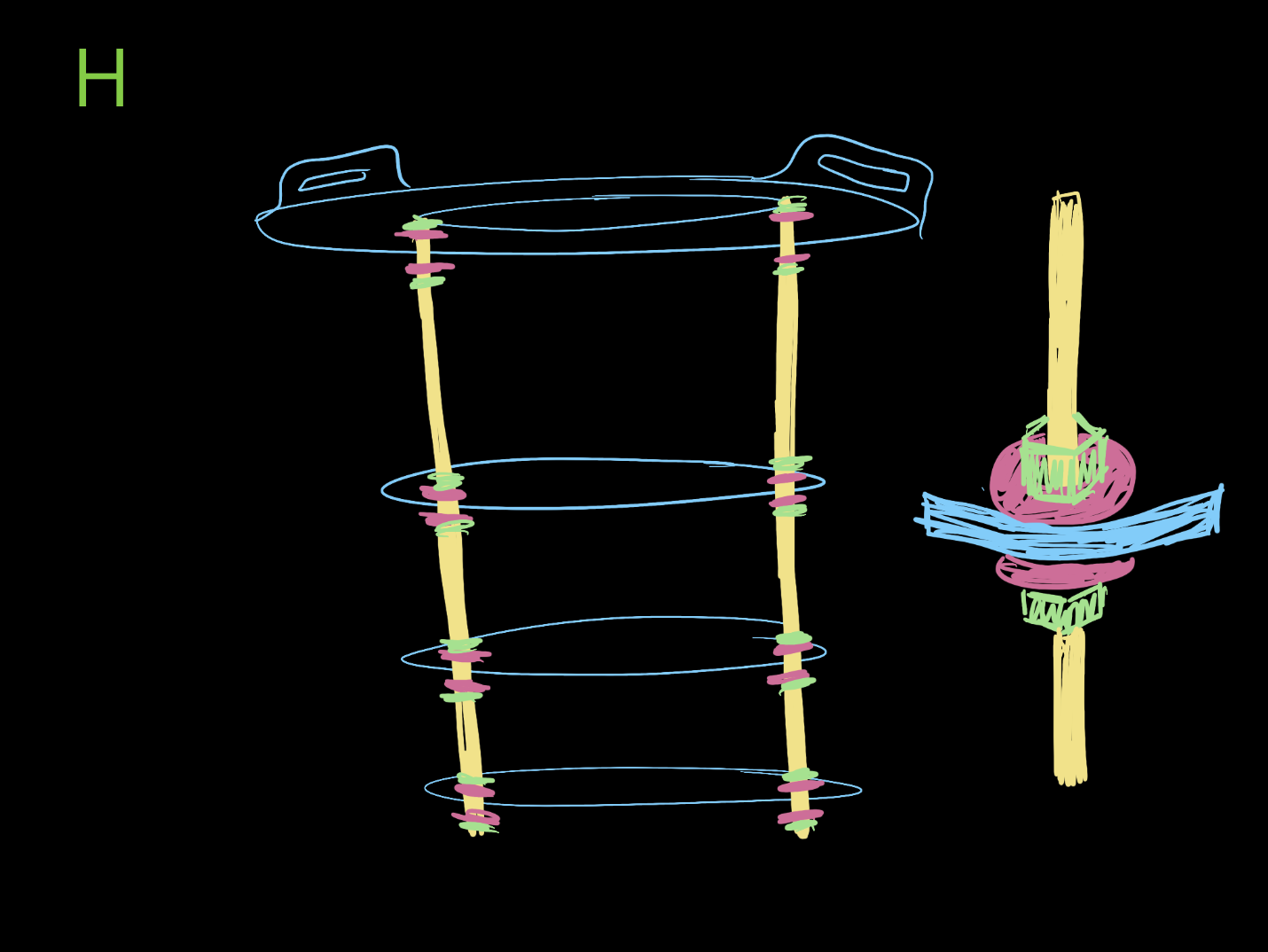 H: Does this look familiar?! It’s the concept for the stacks! Including some dampening foam (pink) on the threaded rods (yellow). This concept shows that the design is modular in terms of adding more stages to the stack 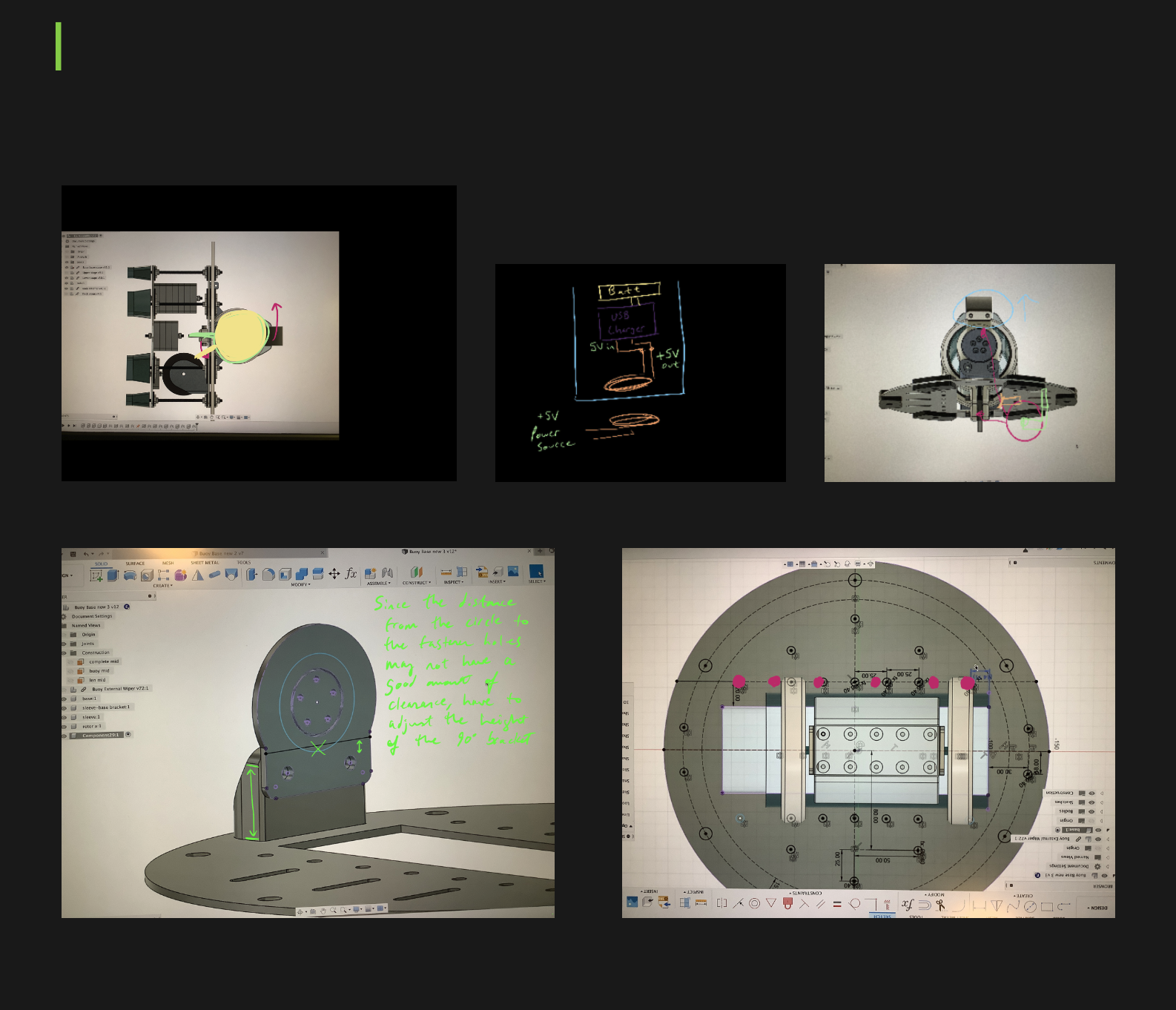 I: In between this sketch and the last one, CAD had commenced. As well, top middle, showing an idea for inductive charging - where the coil would be located. The sketch that was extremely useful was the one in the bottom right - for figuring out the spacing of the mounting holes for the buoy holder. 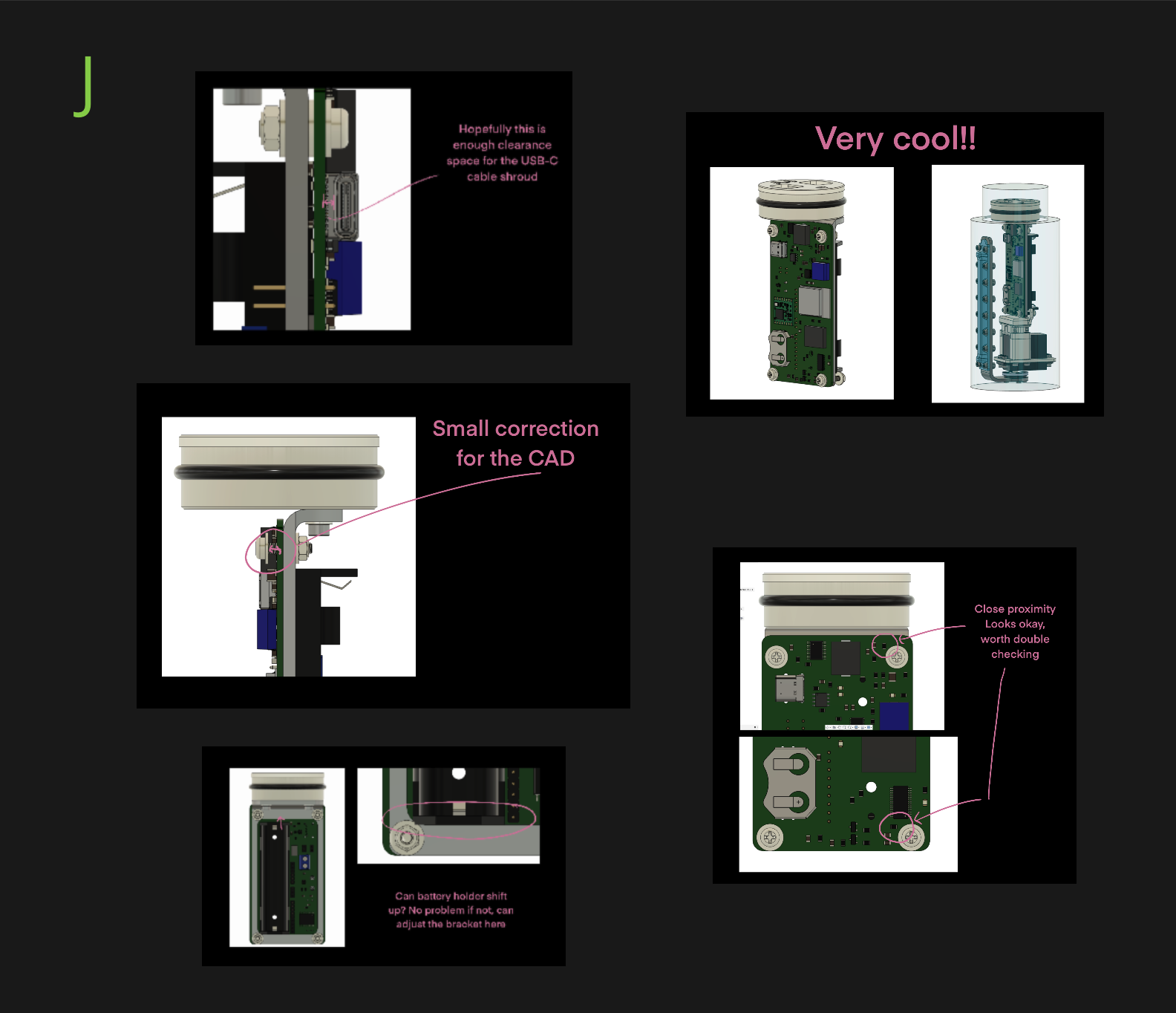 J: Electronics integration review with Leo! This was a great way to point out areas of concern on the integration side. 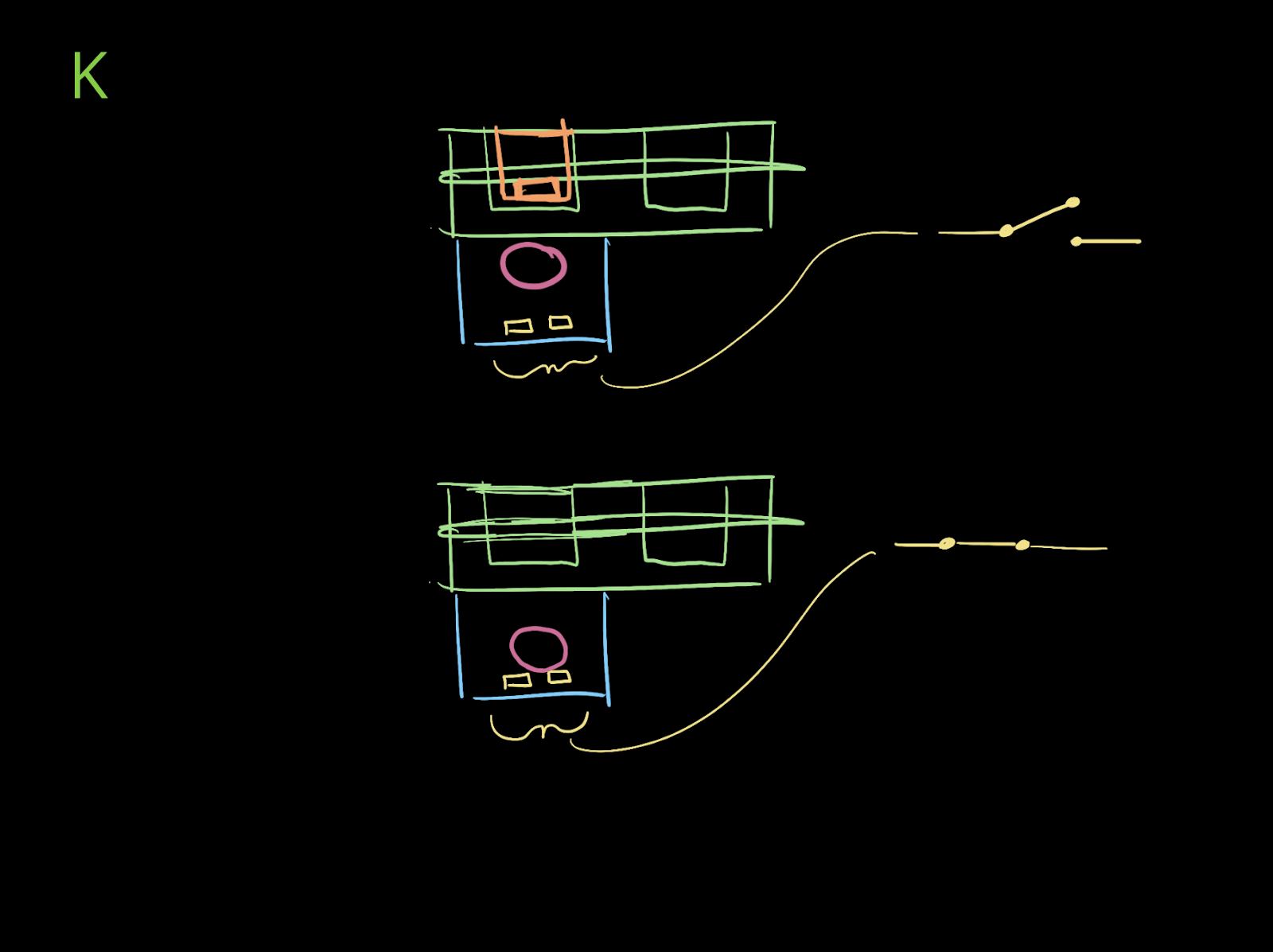 K: Uhh… we need a power switch, right? This is slightly difficult when using a sealed enclosure. This was an idea using a magnet and ball bearing to make contact on an internal switch piece. It’s based on the FINDA probe on Prusa printers. 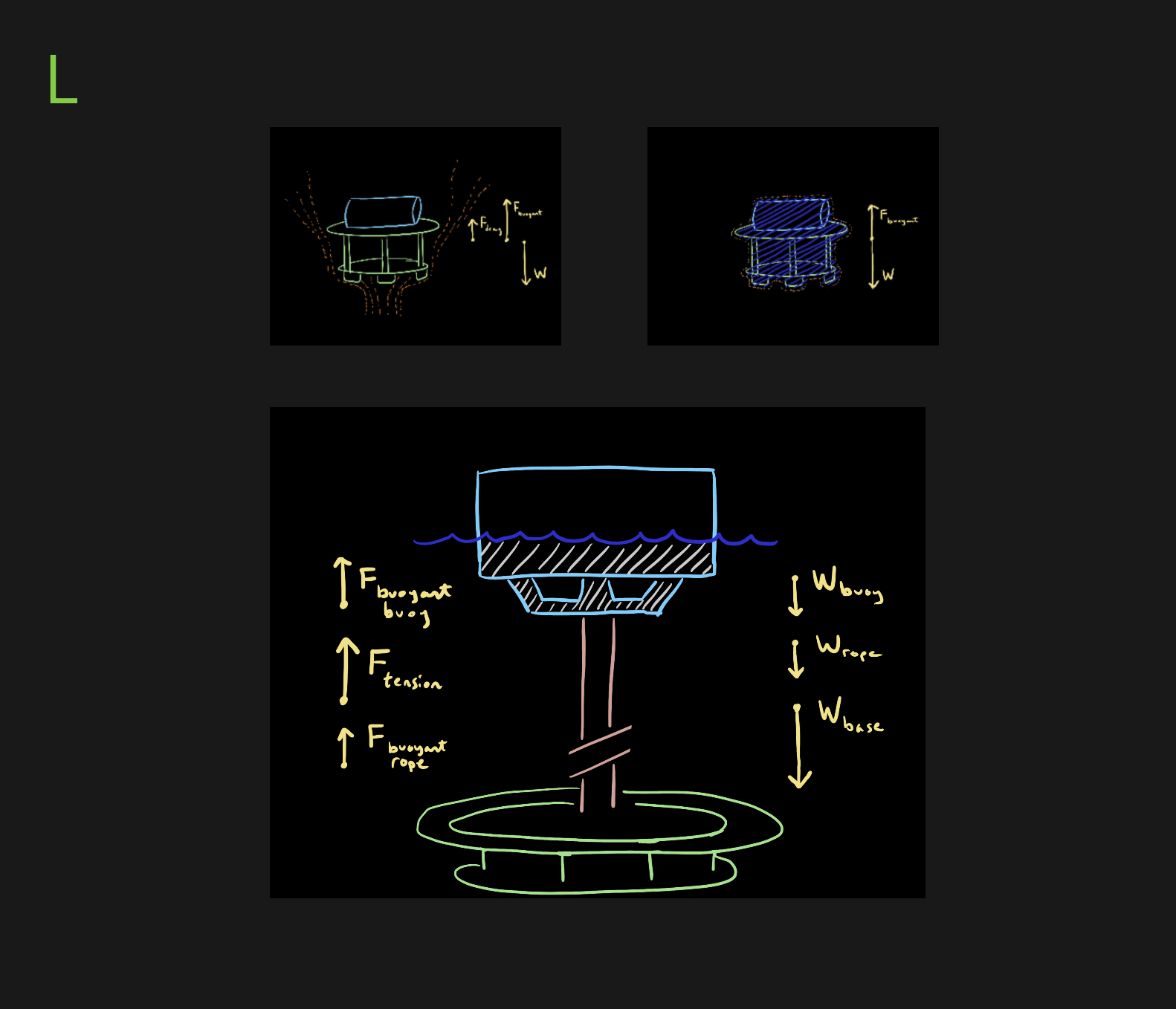 L: These were sketches for the documentation of the physics model! 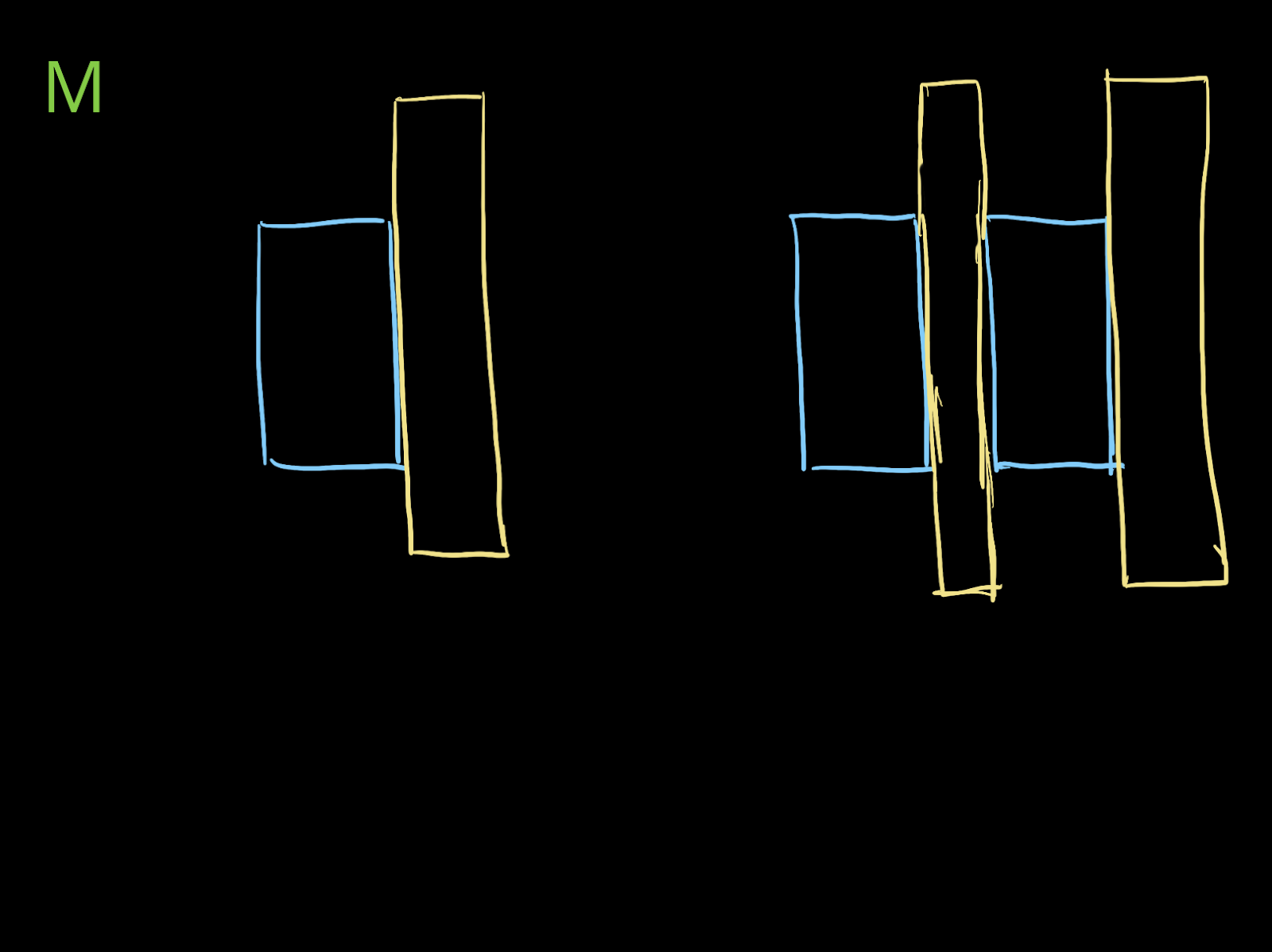 M: We will end on a funny note. This doesn't fit in with any of the groupings because... what on earth is this sketch? No clue! Let’s call it abstract art. :)

It was fun to look back on all the concepts and sketches through the project. Drawing is a very useful communication device! And hopefully this shows that it is not necessary to be a renowned artist to get started drawing.

This reminds me to couple of notebooks filled up with some sketches  that just they manifested in my dreams and sporadically just flow out of my mind🧐 since long time and sometimes I try to figured out what are they for?😵💫and build something out of then, actually I succeeded to print out one of those sketches in my homemade  3D printer🤪.