a project for my work-from-home desk, with CNC cut profiles, addressable LEDs, with tentacle kinematics

To achieve an even spacing , i cut 3 spacers that hold the parts before securing them.
I did the same on the bike cable for the arm. the lower half has ring supports to increase the contact surface between the cable and the vertebraes. It helps with the twisting and bending.

In order to rotate the lamp's head i decided to make my own ball joint. I look what were the commercially available solution but they didn't convinced me.
So I stacked several layers of aircraft plywood and assembled them with wood glue to reach a 10mm height. In fusion 360, i modeled 2 half spheres and set 2 passes for the cut.
I also cut the housing which is held together with a M2.5 scew and nut. 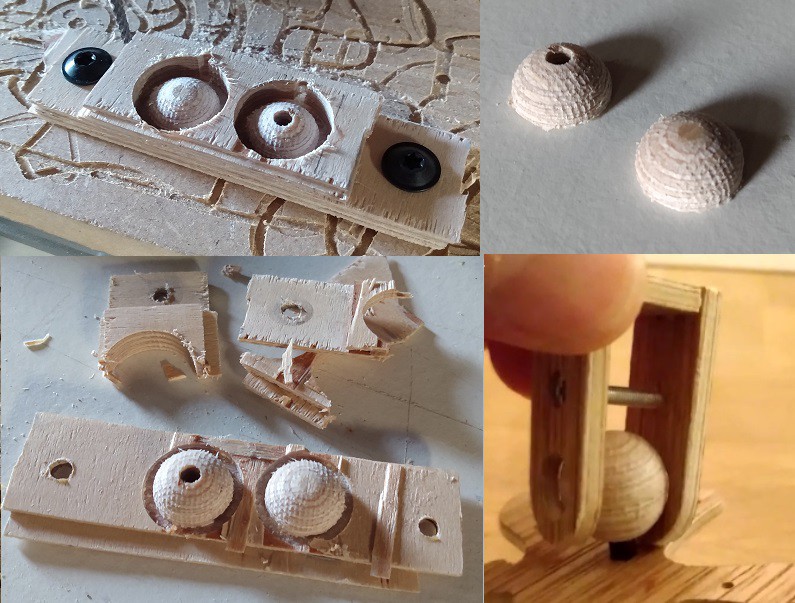 The result is really nice, the texture of the ball surface is a bit rough but helps to keep the joint rigid enough to support the weight of the head

So to actuate the arm, i planned to use a tiny stepper motor that i had in stock, a basic 28byj. I had read about capstan drive here https://hackaday.com/2021/01/26/cable-mechanism-maths-designing-against-the-capstan-equation/ and it seemed a good solution to my actuation problem.  I cut a pulley out of 5mm plywood and 1.5mm rims with a hole fitting the stepper shaft.

So i designed another one with the possibility to tension it with a screw and with a support arm in front of the motor that now bear half the load and avoid the pulley torsion.
The nice thing is that the mechanism is backdrivable and the arm stays in place , capstan was right, there is a lot of friction in those two cable loops !

The bad new is that the stepper is way too anemic to drive this thing ( and this was confirmed by its datasheet) : i need at least 800g of pulling force on the cable to straighten the arm as above.
I'm back to the drawing board for a drive system. I'm trying to reuse some parts i already have  and i may try to cut some gears to drive the pulley with a wounded microservo. I don't know if it will be enough and probably won't be backdrivable but i'm out of ideas....