After several days, all the panels were done filament depositioning. None of the 228mm ones had any showstopper defects, though they improved over time. The last panel was a narrower one with no bed heating, but the 228mm ones definitely required it.

There was an attempt to evolve joining the segments to use PLA zigzags. This was the 1st attempt at expensive printed tape. The mane problem was clamping it to get the adhesive to stick. Magnets were terrible. It really needs a big, expensive jig. 1 piece goes on the flat side. The other piece needs pins pressing on all the facets of the other side. The final solution was spraying water to accelerate the glue, but water leaves a white film. 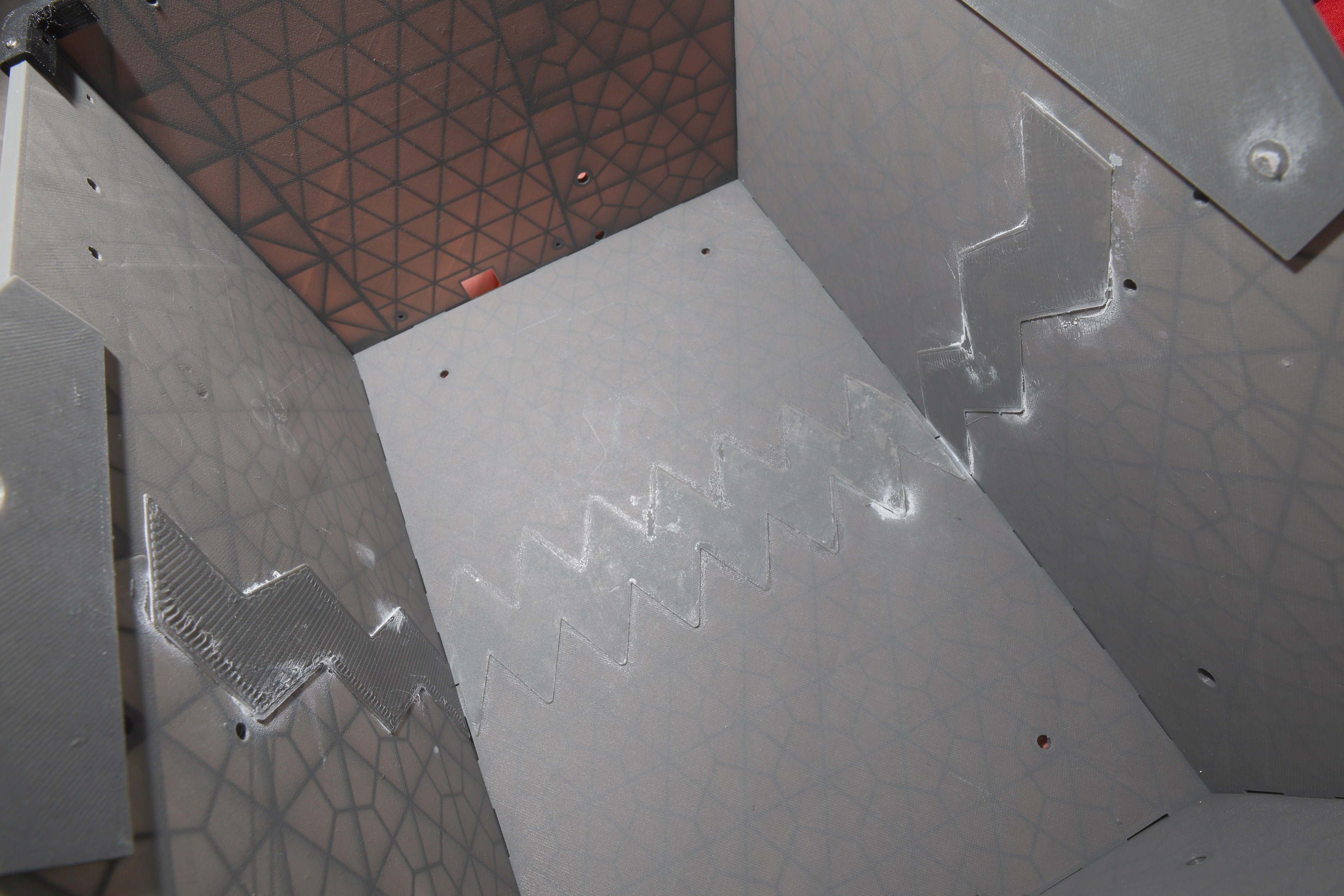 Despite the artifacts, the hassle, & the price tag, the zigzags were visually lightyears ahead of duct tape. The mane issue is how they look when light shines through the panels.

The corner bumpers had a lot of delamination. They definitely needed 2mm walls & .32mm layers, but the TPU absorbed a lot of water from the lion kingdom's air conditioning.

Lighting used a slightly improved hot glue process & no solid core wire after all the solid core wire broke in the last container. The 3D printed containers have a lot more flexing near the corners than coroplastic.

The standard storage compartments went in with duct tape since duck with zip ties has been very robust. The lion kingdom likened its own container design to the battery box in the Robotix R-2000.

According to random ebay photos, the top had a lot of artwork, but it also had a lot of functional polygons for attaching bricks.

The bottom was a simple grid for strength.  There was no effort where plastic needed to resist the downward force of D cells.  The cleverest part of that kit was a switch for a 5th servo, but only providing 4 servos.  A kid would pay a fortune to get a 5th servo.  Those were very high torque, 360' servos.

Apparently, the battery bank was center tapped to provide reverse voltage to the servos.  Semiconductor H-bridges were a fortune in those days, so the answer was 3 rails.  The  lion cub had no concept of cost savings & just thought the 3rd conductor was a professional touch.  Honors & benefits already at the age of 9.

Today, paying an animal to solder a center tapped battery terminal would cost a fortune compared to using H bridges.

The inside had some placeholders for the batteries, but nothing structural.  It just relied on a thick shell, probably a generous 2mm.

The kit in general had a lot of plastic artwork with structural elements, much like what the lion kingdom tried to do.  There's a lot of engineering in making sure plastic bits fit together & don't break, before they ever get to the artwork.

Stuff like the Robotix kit was probably designed by Milton Bradley employees in New York city, as depicted in Big.  Milton Bradley was a real guy who worked as a draftsman (human CAD program) before trying to sell prints of Abraham Lincoln.  When Lincoln grew a beard, his prints became worthless.  That forced him to sell board games.  Today, the toy companies are all owned by Hasbro & the creative process is all done in China.  Hasbro is just a law firm.