A project log for A Cyberdeck for the Masses

Most people should be able to build and personalize this 'deck to their liking.

https://imgur.com/gallery/Nx1dnUwThe, erm, less-obvious reference, all the way from 1994...

...if you don't get the more-obvious one, well, you're probably just not old enough! Wait a few years, I'm not explaining it. Especially not here...

A brief note on terminology. The field of computers, like nearly any other specialist field, has, over time, evolved sort of its own language -- certainly its own vocabulary! PCI Express, modem, form factor, baud rate, kbps, resolution -- some of these terms are old, some are still in use today, but all of them are computer jargon, terms of art used to describe things in the field that would otherwise be hard to explain or refer to.

I'm going to need to use that jargon throughout the rest of this, and where it's not been explained adequately, I'll do my best to provide at least enough information that you can ask your own local Friendly Neighborhood Nerd for more... or consult Wikipedia if you're an information junkie (or an information sadist! Most of those articles are highly technical in nature and not simple to understand... sadly). For those who prefer the dead-tree method -- good for you! Hardcopy should *never* be rendered obsolescent or obsolete (if it's still somewhat around, like a PS/2 keyboard, technically it's obsolescent; obsolete is properly both dead and gone in at least practical entirety) -- last I heard, Barnes & Noble still stocked computer maintenance and repair books, although those tend to be rather comprehensive tomes, several inches thick, and priced like college textbooks. An A+ Certification textbook will be priced similarly, but (ironically) may not be nearly so comprehensive, as newer such books tend to omit entirely, or gloss over, a lot of 'legacy' (obsolescent) hardware such as older-style PCI slots and how they work (aka "Conventional PCI", the white expansion-card slots that predate PCI Express... if your PC is much newer than about 2010, you probably can ignore this) that are still on a few really old systems out there.

A particularly important bit of jargon is "form factor". Simply put, a form factor is a formal or informal specification ("spec") for a hardware design. Typically a given spec sheet (any written documentation) for a form factor describes its physical layout, its dimensions -- and the acceptable ranges and tolerances, as well as restrictions on both in places where such need apply, for such dimensions -- any features that need to be included (and where and how) or excluded, etc.

A "cyberdeck" is a specific form factor of portable computer. Historically, it is a de facto spec, having evolved from a number of sources in (believe it or not) the mid-to-late-1980s and early 1990s. The term was created by William Gibson for his breakthrough novel "Neuromancer", but, according to his own accounting in an interview many years later, he was, ironically, rather unfamiliar with computers at the time and thus was careful to leave his narrative descriptions extremely vague! Illustrations in the source rulebooks for the first edition of the tabletop role-playing game "Shadowrun" in 1989 (basically, imagine playing "Dungeons & Dragons", but instead of a fantasy world, it's the "Blade Runner" universe) gave a proper imagining to the design, but it wasn't until people actually started designing and building their own such computers based on those illustrations that a spec emerged. It's essentially design by crowdsource (crowdsourcing is the model Kickstarter and IndieGoGo are built on... however, a more appropriate modern approximation might be a Twitch streamer's chat crowd, if we're a bit optimistic) but given enough time and experimentation by the appropriate people, it can indeed turn out quite nicely... as happened here.

What emerged is simple, but effective. A large, rectangular base, typically at least as large as a 'standard keyboard' (this is to say, a desktop-style keyboard large enough to have a full number pad, navigation and cursor keys, a full complement of a dozen F-keys, and the three indicator LEDs for the lock keys... basically, a full 103/104-key keyboard), and often incorporating a touchpad or trackball style mouse to one side as well. A box or other space hangs off the rear of the keyboard, at the far-left side, housing the "system unit" (the mainboard, CPU, RAM, drives, etc). A proportionally-small LCD screen, such as from an EeePC or other netbook, folds over the system unit lump (which often is fairly irregular in shape or outright incorporated into the keyboard somehow) like a typical laptop.

A fine example of this is the cyberdeck build by [Tinfoil Haberdashery] aka [mothernaturesson] on Imgur, which had a writeup here on Hackaday, back in 2018... 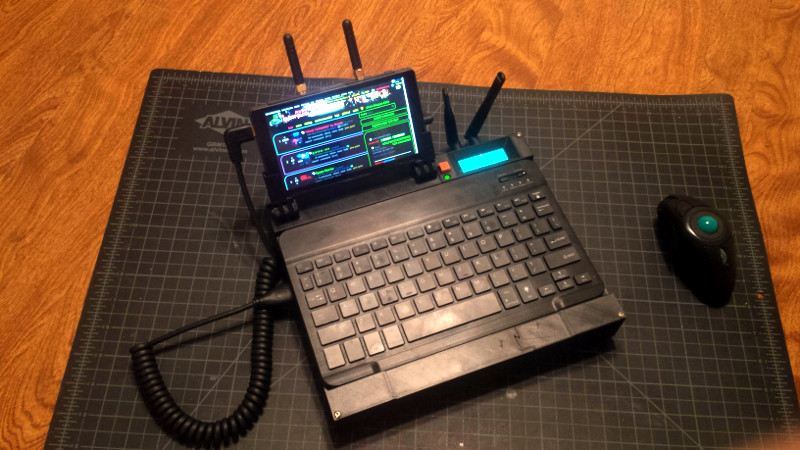 Notably, however, as this is a field of hackers, makers, and tinkerers, there is considerable variation in implementation -- 'decks (for short) which put the screen on the right, or incorporate multiple screens, or incorporate smaller or oddball keyboards or even build into the housing of 1980s home computers such as the Commodore 64 or early "luggable" style portable systems are not unheard of -- in fact, the system above, as an eagle-eyed viewer will note, uses a compact keyboard, and its successor, which also got a Hackaday article, and is quite honestly one of my favorite designs ever (no joke!), incorporates a split keyboard around a center-mount system unit with a touchpad in its lid; the display mounts over a housing for a battery subsystem -- a true rarity in such machines. 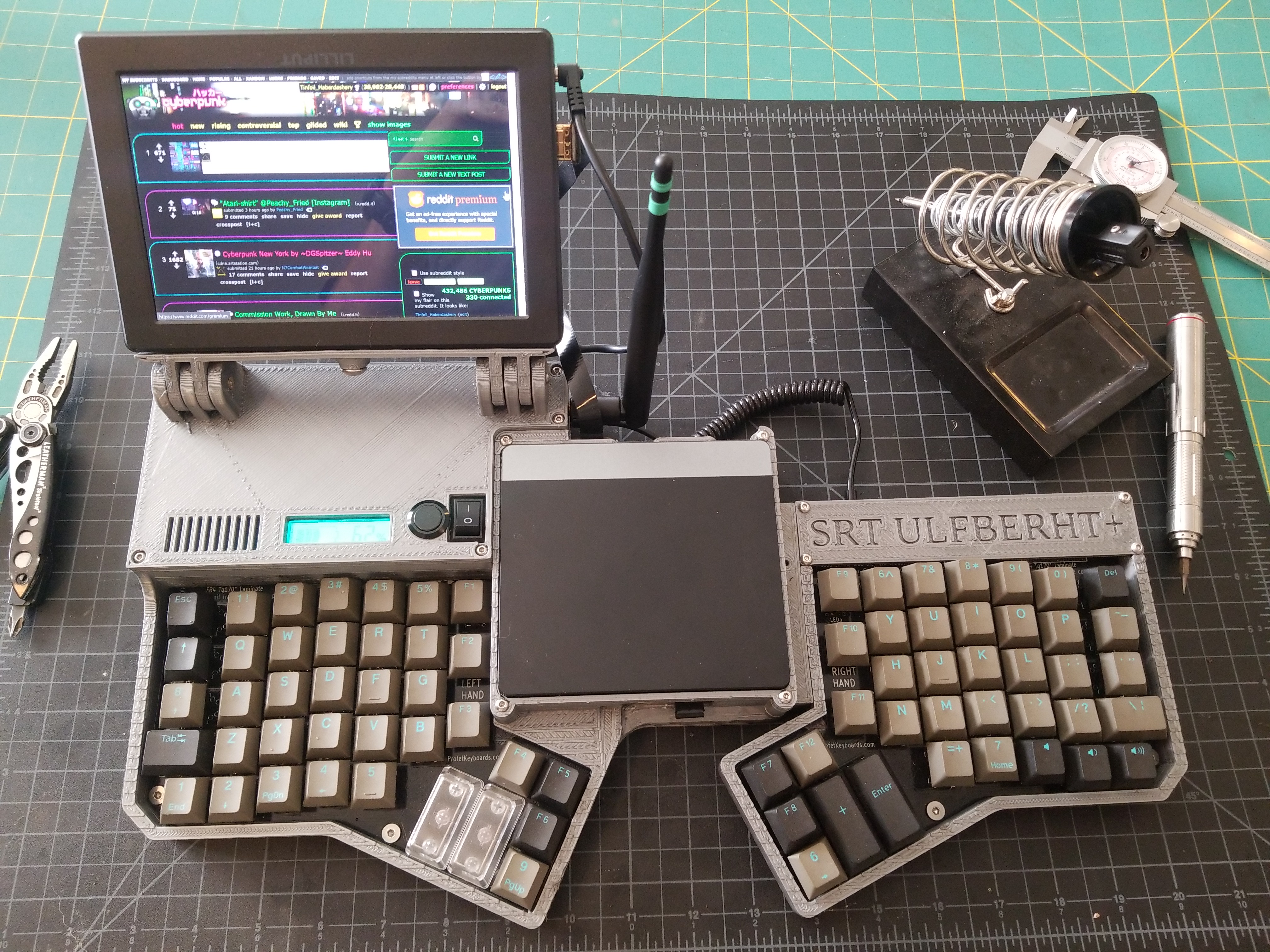 [Imgur Build Log Link: The Cyberdeck Mark 2: the dream of the '80s is alive.]

Perhaps, someday, I will be able to claim that level of technical wizardry -- I certainly aspire to it! Alas, for now I am hardly fit to apprentice such a master. I can hold my own, but I'm nowhere near that good...

It occurred to me some time ago that, if the end-user (that's you, sitting at your keyboard, thinking about the next Dell or HP you maybe need to buy and dreading the thought of even a glance at its price-tag) could build their own PC, custom-tailored to their own wants and needs, they could save a goodly bit of money, have something to show off and brag about, and it would be better for them than a "one size fits all -- except the ones that it doesn't" machine from the big-box bargain store. Some years later, I began building my own portable machines, and over time, my tendency to acquire parts of questionable quality and history, from sellers of questionable repute as well as my inability to keep from tinkering has meant that there has been a rather frequent need to rebuild those machines, often from the ground up.

Then again, if I woke up one morning and just randomly had Linus Sebastian kinds of money (aka "LinusTechTips" on YouTube) -- or even JayzTwoCents kinds of money -- I'd have absolutely no idea whatsoever what to do with it. I'd probably blow it hard by building my dream house in my dream spot for the place. Being rich is a skill -- so is being poor -- but they're different skills. It's interesting.

Philosophical musings aside, at some point in the midst of building one of these many, many machines for myself, I realized a sort of formula had evolved. I had established a routine method. It was simple, it was effective, it could be communicated easily and varied even more easily. I had, somewhat unconsciously, worked out what amounted to my own prior goal -- a simple, basic formula, communicable to and understandable by most people, from which they could assemble and build their own custom-tailored system.

Let me put that in its own block quote, it's worth setting it apart for the importance alone.

I now had a simple formula, which I could easily and effectively communicate to most people in a way they could understand. Following the formula, they could build their own computer, in a simple process lasting a weekend or less, custom-tailored to their needs. They would spend less and get more than any comparable pre-built solution from a retail outlet or specialty computer store could offer them, and they would have something unique to them that they could feel accomplished about and show off a bit as well.

Think about the power of that for a moment!

The next log will lay out the formula properly, and go into a very brief discussion of its potential variations.

"Going to the Hardware Store" - Some Talk About Tools