A wireless input device that's slower than... thinking(?) but faster than any other character input method, theoretically.

Right now, I'm deep into processing the electronics solution of #Tetrinsic [gd0041], but I've also started to worry about the bigger picture, which is Tetent. My concerns are about the wired connection and audio.

I'm thinking that perhaps going from 0 to Tetent might be too much of a step that I don't have the confidence level for. Thus, I'm thinking of this roadmap:

This is due to the precieved difficulty level:

So this device is basically a non-split, fixed-tent, minimum viable product (MVP)Tetent. Just like I don't need the #Teti [gd0022] case printed to use my PC (yeah it's been over a year and it's still just living on the motherboard box), I don't need a wireless split to benefit from the Tetent layout. Like I've said before, Tetent is supposed to speed up all projects, so it's better to get an MVP and use it to finish itself than use yesterdays tools all the way to the end.

The "test" part of the name is probably self explanitory, but the reason "cut" is in there is because I want it to look a bit like it was cut out of a block of marble/granite with its straight, geometric edges. It will be inspired by the below keyboard I really liked the look of whilst I was doing the "Why hasn't [Tetent] been invented yet?" research rounds. 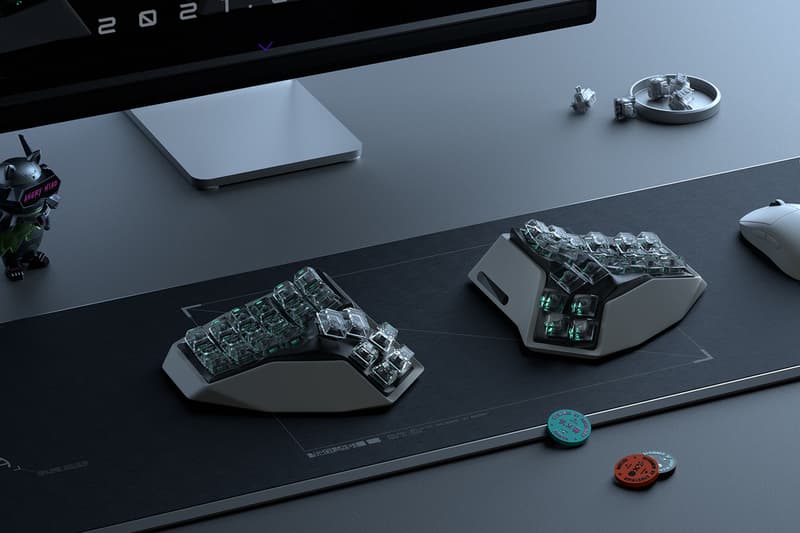 You could also think of it in terms of "testbed" + "shortcut" merged together.

I haven't specified if there would or would not be audio. Without the split, it sounds straightforward enough to do. It will be wired though. I also might need a capacitor store since there'd be 8 motors on 1 USB port. Hopefully, dedents and virtual stops don't require amps of power.

Even before these concerns/worries, I've been thinking of making TestCut because the tenting part of Tetent is still an unsolved issue. I think the most ergonomic solution are thigh straps so that the arms are in this desk-free state:

The cons of the roadmap

The only real one I can think of is money related, but I really shouldn't be sacrificing months of potential progress on multiple projects just because I wanted to save £10 on my AliExpress order 😂 (If the current GBP:USD convertion rate trend is anything to go by, I might actually save money).

Other than that, the idea that "I've already got something that works, so why should I finish the project?" is a mentality I have to avoid.