Mechs are not viable, nor cheap, so I will try to design and build one alone anyway.

No matter what I say here, there is always a simpler solution, that's the beauty of engineering.

I'm making a project log "1.1" because I had an idea that I don't know if it just plain stupid or if it is worth of your time to read about it.

If y'all aren't aware of that, there is a thing called "flexible shaft" that can be used on handheld drills.

"Hey, what if I use a single motor with a flexible rotating shaft to drive all the limbs while it maintains the same rotation?"

Basically, a single strong motor rotates a geared shaft, and this shaft is connected to multiple gears that would engage or disengage other gears that would rotate and transfer the power output to the limbs.

At first it made sense in my hollow head of mine, but if you stop to think about it, it is not so different than the pneumatic/hydraulic/vacuum actuators.

You have a single driving force continuously working and a bunch of paths that need to be engaged and disengaged in order to move the machine, just like the solenoid valves in the pneumatic system. The only difference is that you wouldn't need to worry about pressure and efficiency losses that much (I think).

But wait... You would need a transmission box for every engagement because the shaft would be rotating at a constant speed without changing for your desired force/speed...

But there are friction clutches and friction gears that can engage and disengage in a certain way so that the right amount of speed/torque can be transmitted to the limb movement.

Friction gears are basically rubber wheels that transmit rotation through friction, these also allow for gear "slippery", unlike the conventional metallic gears that would crush your bones if you were in its way.
Which allows for a compliant mechanism, so to speak. Which makes machines/robots safer to be around humans, just like other humans.

However, you can change the force applied to a solenoid in order to control the movement of the shaft, but I don't know how precise that would be. Since it is a friction clutch, you could simply measure the rotation of the output and calculate how much current you need for the clutch to be engaged with more force/torque.

Maybe you could have one of those variable torque and speed transmissions.

You could also make a "super" planetary gearbox where the planet gears would be the rotation axis for every flexible shaft with a self-contained variable gearbox/friction clutch in order to transmit the correct amount of power and speed.

This is a planetary gear, the smaller gears are the "planets" and you can use it in a variety of ways. Like using an electric motor to drive each singular planetary gear and rotate the bigger "sun" gear shaft and so on. 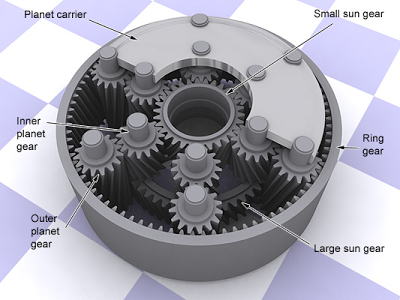 You can have as many "planets" as you like.

So, let's just calculate the amount of axis an entire humanoid mech body would need.

It sounds like a lot to think about, but it sounds manageable.

The problem, like I said before, is that you can't find these types of mechanisms for sale, and making them at home would be super hard.
But maybe I'm being a defeatist/lazy here, to me this sounds quite good as well. Not as easy to mess with as artificial muscles, but quite interesting nevertheless.

You could use the same logic to pull the cables instead of rotating them, but you would run in the same problem of the "solenoid creep". Since they would be muscles with pulling action and not axis that would transmit rotation.

But maybe it would be feasible, you would directly convert your electricity into mechanic force. Unlike the other options.

Just like this guy does in this video (or something close, I think).

And that's it, I hope I explained it in a understandable way... >.>

Project Log 1: The good, the bad and the muscle.

I would expect a lot of friction from a flex shaft under any significant load. Same with bowden cables, although worth it for hands since they don't use much power anyway, and are a long distance from the shoulder so you want to keep the actuator mass as close to the elbow as possible for low moment of inertia. But I'd recommend saving the forearm-hand unit for later since it's pretty much a full project by itself, and pretty different from the high power joints.  For starters just make a simple pincher or something. Will Cogley on youtube was working on an awesome hand, but abandoned it due to lack of free time.

I think BigDog used hydraulic pistons and managed to do proper dynamic walking and balance rather than the statically stable walking of most robots. But electric motors certainly are easiest, and with current limiting and low reduction you can get springy/compliant behavior that makes them relatively safe and inherently stable for walking (if you haven't already watched James Bruton's OpenDog series, it's very educational).

Wow, thanks for the advice! :o
I will watch these videos :)