Open source universal infrared remote control based upon the STM8S microcontroller with oooodles of connectivity options.

One debugging feature I have been keen to add is the ability to see the EEPROM memory. This will aid the debugging of the code on the STM8S as it will be easier to see the data being consumed by the application running on the remote control. The EEPROM memory dump feature simply displays a grid of memory locations along with the contents.

The main form has been modified to take values from the user and then to translate the contents of the user controls into data for the EEPROM.

The first step is to make the controls on the user interface respond to the values being entered and also add a mechanism to show the form which will display the EEPROM memory: 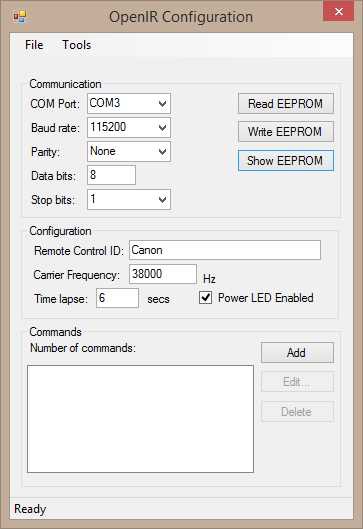 The application will also need a class in order to hold the contents of the EEPROM. This class acts as an intermediary between the raw bytes in the EEPROM and the data displayed in the user controls. The properties in the class translate the bytes into data types which can be used by a C# application and visa versa.

For instance, consider the remote control name. The C# application would like to see a C# string object. In the remote control EEPROM this is a series of up to 16 bytes each holding one character. A property presents a convenient way of performing this translation. The EEPROM class will require a series of bytes to hold memroy contents:

The Name property can then translate the C# interface requirements into those required by the STM8S application:Similar properties can be added for the carrier frequency etc.

The form displaying the EEPROM memory makes use of a Grid control in the Syncfusion Essential Studio Enterprise Edition Community edition. This suite of tools contains 650+ controls for a variety of platforms and has recently been made available at no charge to individual developers and small organisations with a low turnover (< $1m).

The form showing the EEPROM memory is simple and contains the memory contents and a button to close the form: 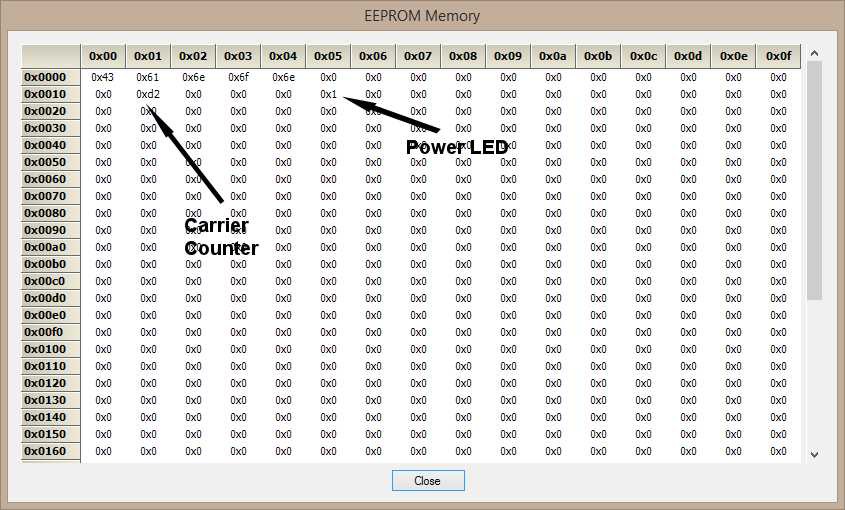 The image above shows the memory when the following properties have been set:

Development of the Windows interface is proceeding steadily. As much work as possible is being offloaded to the Windows application in order to streamline the code which needs to be written for the STM8S.