IDE is one of those legacy technologies that you see everywhere in spite of its age. ATMs, embedded industrial systems, and old office PC installations still utilize IDE hard disks and IDE/ATAPI optical drives at the time of writing. The technology was alive for the better part of two decades, and was a significant improvement over the SCSI drives that predate it, even if it has been largely surpassed by SATA in nearly all configurations.

So why is it this hard to find a good, low-capacity IDE hard disk?

It proved much easier to just use a slightly less antiquated storage format that just happened to be natively compatible with IDE, with a significantly lower failure rate. During the week leading up to me receiving these parts, I worked with an older Windows 98SE machine I had lying around, installing a new network controller, sound card, and graphics card in it, and configuring it to dualboot Win9x and Win2k in order to give it maximal compatibility with both older and newer systems, as a sort of middleman when sending data between the Reverse-Sleeper and my studio or gaming PC (in addition to just making a great Windows 98 gaming PC, which incidentally, would have been just fine playing DOS games, but where's the fun in that?)

Computers like this are called tweeners, or in-betweeners, because they are just old enough to communicate with antiquated hardware but just new enough that they won't be completely SOL when speaking with the latest and greatest machines. I'll write a post about the tweener separately after this is complete, as it deserves its own post.

(Note that the use of Ethernet, if possible with the machine in question, can totally remove the need for tweeners; however this isn't always an option.)

Now, the reason the tweener PC is relevant to this post is because it, too, uses IDE for its drives, and unfortunately, of the 4-5 IDE hard disks I had laying around the apartment, two of them failed catastrophically before I could use them to any effect. One probably had a logic board failure and was simply not recognized by the IDE controller anymore, and the other suffered from a lovely case of click-of-death.

Neither of them were particularly old as far as IDE drives go (1999 and 2004, respectively). When it came time to figure out what to do about the Reverse-Sleeper's storage, the double-failure was fresh on my mind and got me to thinking, what am I going to do for storage on this machine?

DOS 6.22 uses FAT16 as its base file system. FAT16 only supports partitions of up to 2GB apiece, so obtaining a 40GB hard drive of some kind on the cheap would not only be ill-advised due to the problems with cheap hard drives, but also a colossal waste of space, even if I max out the MBR partition limit of 4 partitions (8GB).

Any 2GB (or other small denomination) IDE hard drives still in existence today aren't even close to being new or robust compared to their original build quality, and are certainly due for failure if they haven't failed already; not to mention the price of finding such a hard drive is prohibitively expensive due to collectors just like me compared to other storage options. And what if it got damaged in transit? It's just a glass or platter with a metal substrate on top. Early hard drives weren't exactly shock resistant. I also really, really didn't want to use a SATA to IDE adapter board because it would be the kind of technology you could see inside a modern gaming PC, right here, right now, defeating the purpose of sticking to older components. I was willing to sacrifice old for interesting, however, and that's what influenced my decision on top of sheer difficulty of finding a suitable drive.

As it turns out, Compact Flash cards fill this niche just fine, and while they aren't exactly retro by any stretch, they do their job surprisingly well in the photography field where fast mass storage is needed.

CompactFlash is a NAND flash (originally NOR flash) storage card that, in terms of components, is not too dissimilar from a modern solid-state drive. Speed-wise, it doesn't have the same advantage that a 6Gbps SSD has, but for the purposes of this project, it did have one advantage: CompactFlash is natively compatible with the IDE standard. Someone could totally build a totally passive IDE to CF adapter with a couple of jumpers for drive modes (master/slave), and a power connector, and then all you'd have to do i-- With a bit of f'nagling of the power connection (notice how it uses a 4-pin floppy-sized Molex power connector), the drive worked perfectly. More on that later in the next update, which should cover the power supply and all that went into that.

I did have to use a bootdisk to format and FDISK partition the drive as it arrived preformatted in FAT32, which DOS 6 was not terribly happy about. One of these days I'll maybe find a patch or driver that lets me use FAT32, but until then, this will suffice. 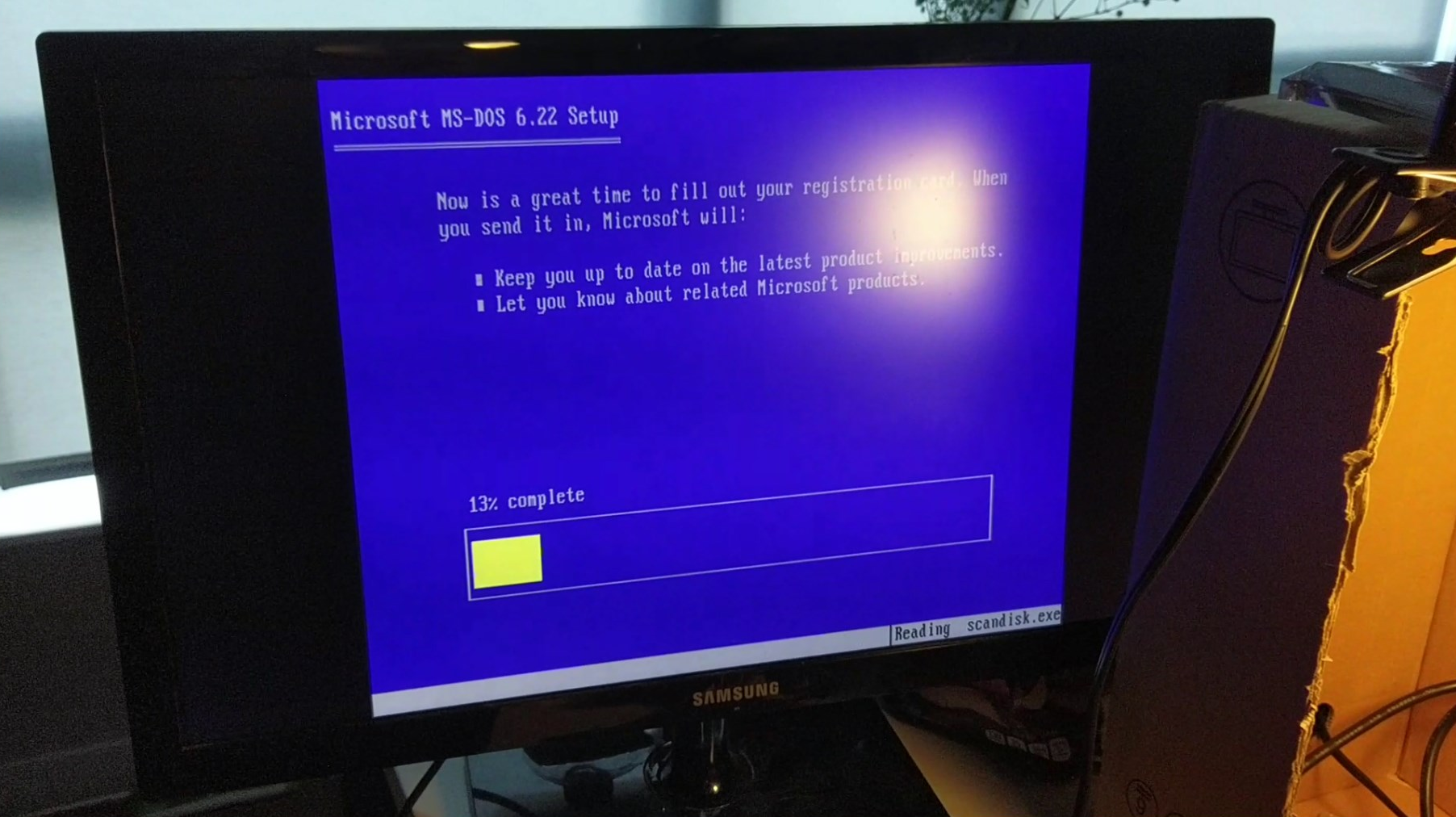