Tales from my woodworking shed

Mission: store the most commonly used power tools (screwdriver, drills, sander) in a safe and accessible way. I like to have these tools plugged in, ready to fire and within arm's reach. My first attempt with the tools stored in pieces of slotted PVC pipe did work but was not very pleasing to the eye nor entirely safe. One of the drills narrowly missed my head when it fell out.

So I decided to build a similar construction out of multiplex scraps. First step was selecting a suitable base and spacing out the power tools. I settled on this layout: 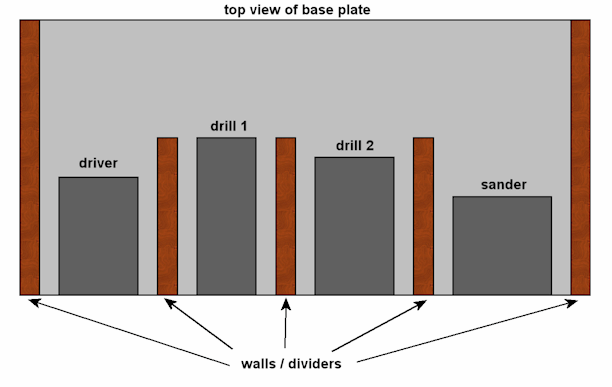 First I sawed out the gray areas with my new jigsaw. Used the table saw to make two planks of plywood and then I cut those to length with the mitre saw. Glued and screwed the walls and dividers in place after pre-drilling and counter-sinking the screwholes.

The top sheet is screwed and glued to the walls and dividers. It is about 3 cm wider to accommodate three screws on each side. These screws will fasten the entire cubby hole structure to the shelf above.

And here's the finished project. Sturdy, safe and cheap! 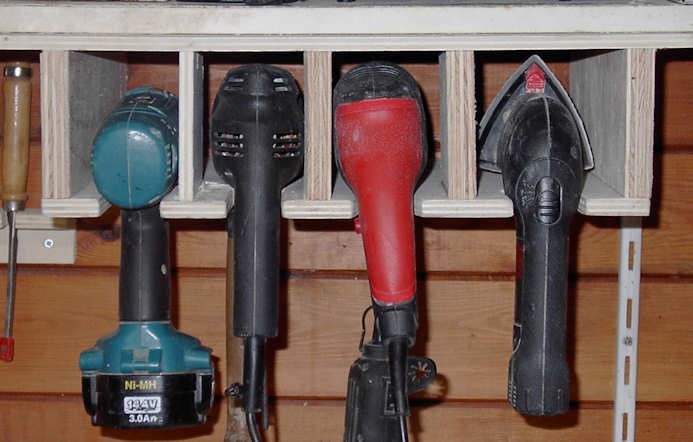