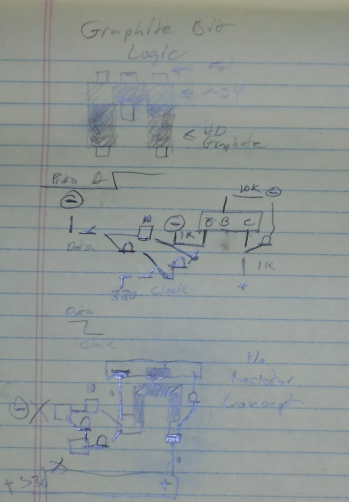 Top diagram shows a basic circuit that can be replicated on bread board with components, lower is concept for one without resistors but resisting lanes of graphite. 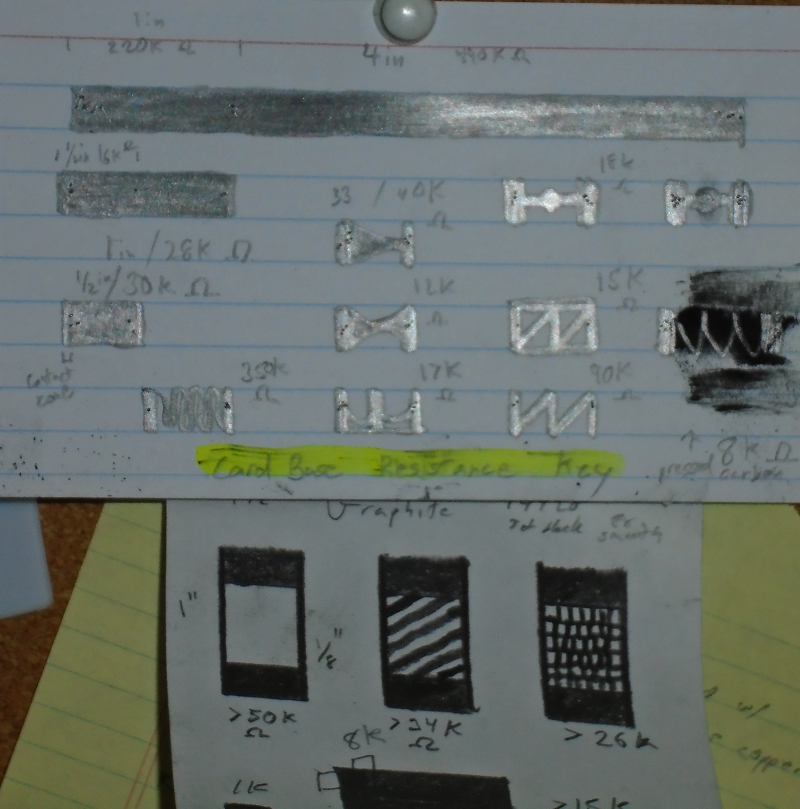 A series of measured lanes of graphite drawn on paper, with the ends tested via multimeter. using the last 1/16 in of area for probe contact. Combining with pressed carbon helps decrease resistance. Pure pressed carbon has a much lower resistance value which will be covered in the second experiment post.

2nd Experiment: Carbon Paint(waterbase) Transistor in a NOT circuit

Using a mixture of water and compressed artist carbon powder to make a paint mixture to draw lanes. Details about paint in Sub Experiments.

Foil is folded over the lines mocked up with yellow, bound with electrical tape, excess material cut off at line shown in image below. Here's the NPN finished and functioning in a NOT circuit.

1k pulse to the Base triggers the circuit, emitter straight to the ground, collecter joined with a LED and 22k out. The higher resistance on the out is required to make this NPN function as a NOT circuit do to the low resistance of the water based carbon paint. Apply to surface in light strokes, repeating until dark.

Example of one directional stroke and several applications of water/carbon paint.

Red is how material acted before drying. Much like the water base, this version uses baby oil(10ml) mixed equal parts with carbon powder.

Applies dark, but create little chunks, so be sure to wipe after. Also holds up to wiping much better than water base, but a far higher resistance. However, this resistance also seems to be more consistent despite distance of contact points. 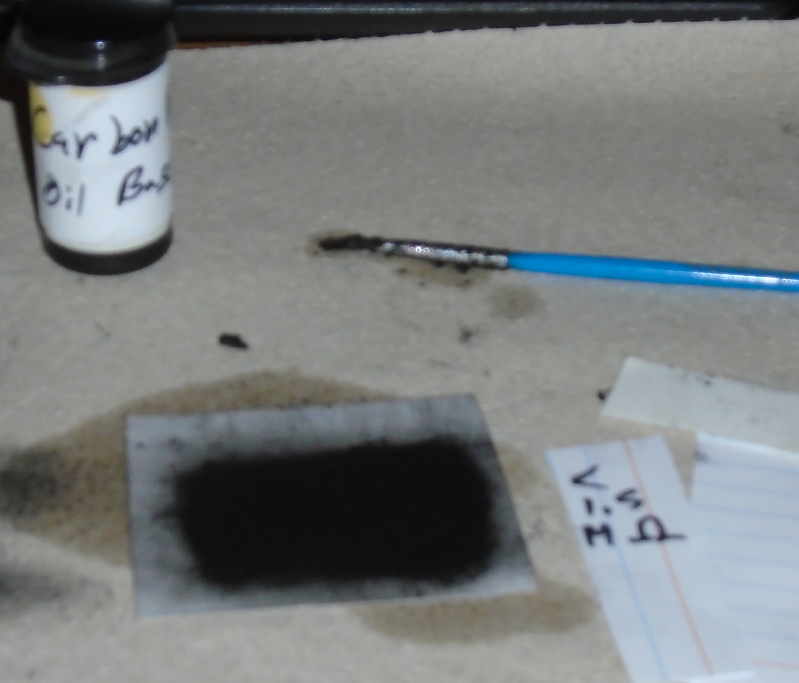 *You can electro plate the material. Heres a small test strip made by just rubbing compressed carbon on paper.

But not to successful on the sticker paper shown before, but there was a drop in resistance, with under a 1k ohms at over 1 inch distance of contacts. 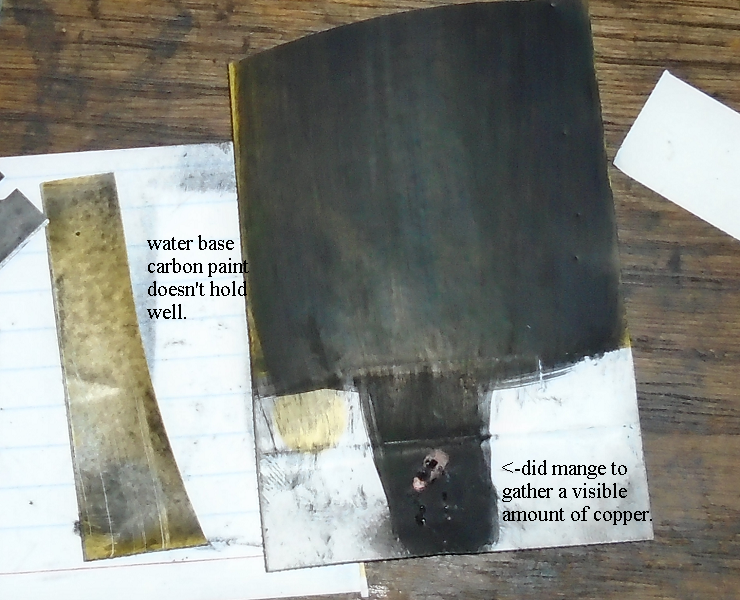 However on plain index card, although no visual showing of copper, the resistance of this material below improved from 8-9k to 4-5k after 3 hours in solution with a 9v current a copper rod source. 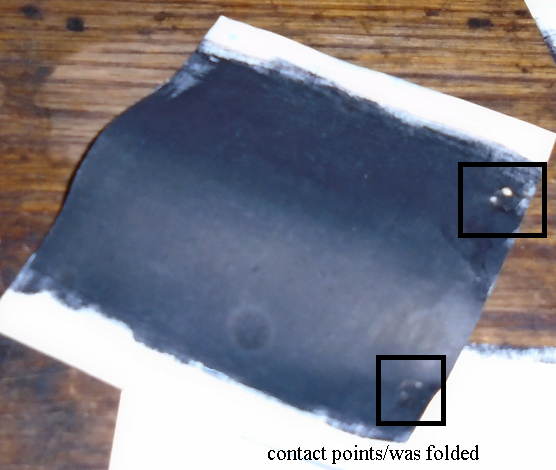 A collection of homemade acetates for plating tests, copper works best. Made with vinegar and peroxide cocktile, and 9volt electric current of source metal to a carbon rod.

Important! Don't try and plate alluminum....unless you want to see what happens and contaminate your acetate. 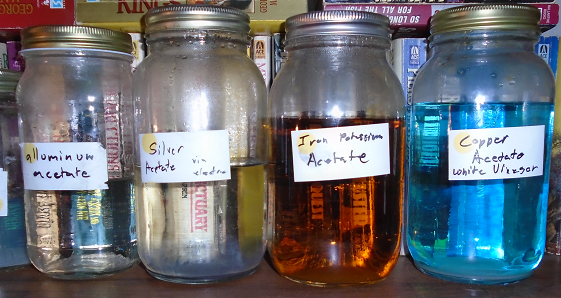 Another interesting discovering while working with these, in another copper mix, I had silver contaminate it. During the plate process, the copper would plate the negative, but the silver would also collect on the positive, eventually pulling all the silver out over time.

Here's some of my first paper plating tests, some have plastic backs, some of the copper parts have flaked off. This was using a oil based graphite pencil intended for writing on plastic like material. The non oil graphite pencil wasn't as effective, but the powder sample had results, just darker and not as flaky.

*These samples were made with a water resistant sticker, scrap from store tags to be specific. The oilbased graphite pencil seems to be more effective than powdered carbon. 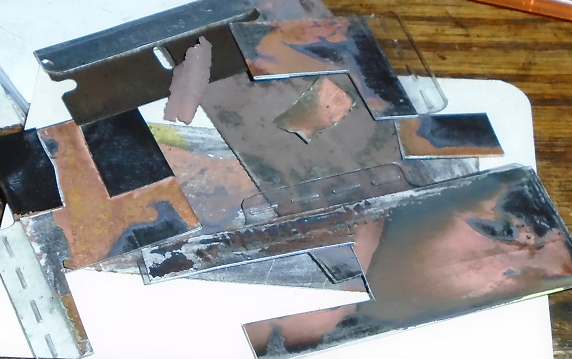