A project log for Hexapod Modelling, Path Planning and Control

The wheel was used for transportation for the first time in Mesopotamia around 3200 B.C. and even today the modern transportation relies on wheels [1]. Nevertheless, according to the US Army, it is estimated that half of Earth’s surface cannot be accessed by wheeled locomotion [2]. On the other hand, legged locomotion is more advantageous in terms of mobility and overcoming obstacles, hence legged animals and humans are capable of accessing the majority of Earth’s surface [3]. For this reason legged robots have been the focus of countless researches in the last two decades [4]. The legged robots are commonly used by military to transport goods over uneven terrain, nuclear power plant inspection, and in search and rescue (SAR) missions [2]. Furthermore, some legged robot are developed for the exploration and mapping of unknown environments, demining tasks, and agricultural tasks [2].

The legged robots are categorised depending on their leg types, leg orientations and joint configurations. Figure 2.1 shows the three hexapod models that are created in MapleSim. In light of the analysis given in the progress report, circular body-shaped model, shown in Figure 2.1-c was chosen for further development.

The structure of this report is organized as follows; in Chapter 2, a comparison between legged and wheeled robots is provided, in Chapter 3, the fundamental concepts associated with hexapod robots are given, following that, a hierarchical control architecture that may be divided as path planning and control is given in Chapter 4. Then, the simulation results that are obtained from MapleSim are presented in Chapter 5 and the report is concluded with future work and conclusion in Chapters 6 and 7, respectively.

2.1.Statements of Aims, Objectives, and Motivation

The aim of this project was to build a hexapod robot in the MapleSim simulation platform to test different path planning and control strategies for the hexapod robot. The steps that are taken to accomplish the aim are as follows:

Throughout the project, numerous resources have been studied and many different methods of implementation have been encountered and some of them are utilised to improve the project. This section is divided into 3 sub-sections which review the different legged robots, methods of path planning, and control strategies.

As it was mentioned in the Introduction, one of the applications of legged-robots is demining; Nonami [2] and his colleagues designed the 4th generation of COMET, a hydraulically actuated hexapod robot, for land mine detection and demining. Figure 2.2–a shows a picture of COMET-IV which is powered by two 720cc gasoline motors, weighs 1500 kg and is capable of reaching a walking speed of 1 km/h [2]. COMET-IV uses force control for navigation on an uneven terrain. Figure 2.2–b shows ATHLETE which is a hybrid hexapod robot that is capable of both wheeled and legged locomotion [7]. It was developed by NASA for exploration of Mars [4]. It is capable of mapping an unknown environment, collecting samples with its scoop and gripper attachments, and transporting goods that weigh up to 450 kg [8].

Roennau [5] demonstrated the 5th generation of LAURON which, unlike its ancestors, is designed with 4 degrees of freedom (DOF) in each of its 6 legs, giving it advantage to climb steeper surfaces. Figure 2.2–c shows LAURON V which was designed for search and rescue (SAR) missions [5]. RHex was develop by Boston Dynamics, what makes it special is its extraordinary design. RHex is a six-legged robot that has only 1 DOF at each leg [4]. RHex weighs about 12.5 kg and it is designed specifically for rough terrain [9]. It is capable of overcoming obstacle that is larger than its size and operate even if it is inverted [10]. Please, refer to the progress report for the other two products of Boston Dynamics, BigDog and LittleDog which are shown in Figure 2.2-d and Figure 2.2-f, respectively.

Rapidly exploring random tree (RRT) was first introduced by LaValle [11] which is a randomised path planning method that spreads in an omni-directional manner from both start and goal points until the two trees meet as it is shown in Figure 2.3–a. Belter and Skrzypczynski [12], made use of this method to obtain a collision-free trajectory over an object.

Figure 2.3–b shows Probabilistic Roadmap Method (PRM) which was used by Hauser [7] to find the shortest path between two points for a humanoid robot, HRP-2. This method is further explained in Section 4.2.1. Bai and Low [15] used artificial potential fields approach for path finding. An example of this method is shown in Figure 2.2–c where red cells represent the obstacles and grey intensity increases as the goal point is being approached. This algorithm is based on a gradient descent search method where the robot is treated as a point particle under the influence of a potential field [16]. The robot is attached to the goal point and it is repelled from the obstacles located within the environment [16].

The operation of robot control architectures is based on a 3 step structure that consists of sensing, response, and action [4]. Figure 2.4–a shows the reactive control architecture, where an action is defined for different sensor readings. This method is used by the RHex robot which is shown in Figure 2.2-f. Although this architecture provides rapid speed of response the method is not suitable if predictive planned outcomes need to be produced [17]. Figure 2.4–b shows the structure of hierarchical control architecture which is used by Kolter [6] and Kalakrishnan [18] to control the LittleDog robot which successfully walks over uneven terrain. This architecture is more suitable for static environments where the goal is achieved in a planned manner [17]. However in the dynamic environments, the planning phase cause a slow response to changes [17]. 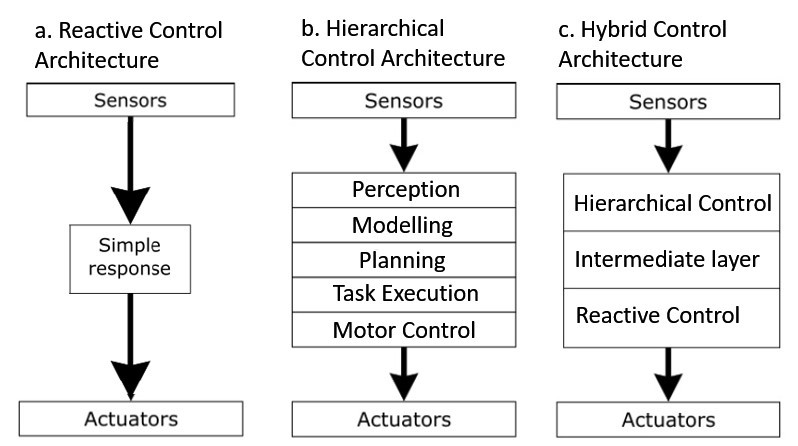 Figure 2.5 Weaver on the testbed.

2.3.Advantages of Hexapod over Wheeled Vehicles

Figure 2.6 Mobility comparison of legged and wheeled robots, adapted from [3]

2.4.Disadvantages of Hexapod over Wheeled Vehicles

The legged robots are not commonly used due to the drawbacks associated with the complexity of the system, low locomotion speed, and high cost of manufacturing [3]. The legged robots are more complex in terms of mechanics and control, compared to the wheeled robots, e.g. the hexapod robot has 3 degrees of freedom (DOF) at each leg, and a total of 18-DOF whereas a 4-wheeled robot has only 2-DOF, i.e. 2 wheels for traction and steering, and 2 passive wheels [3]. In addition, a hexapod robot coordinates the motion of all 18 joints simultaneously, in order to navigate from point A to point B.

Another disadvantage of legged robots is the low locomotion speed since neither the statically stable nor the dynamically stable hexapod robots move as fast as the wheeled robots [3]. Moreover, due to the increased complexity, the legged robots require more actuators, motor drivers, and sensors, therefore the cost of manufacturing a legged robot is significantly over a wheeled robot. The Table 1-1 shows the quantity of needed components which are provided for the comparison and cost estimation purposes.