The 2014 Turtle season will be over in a couple of months. We will have collected data from more than a dozen nests, and have been fairly successful in accomplishing what we set out to do this season. But we still have a long way to go. We need to automate the process of predicting nests and create a fully functional web-site for managing the process that also lets the public and researchers see the results. At the same time we have to perfect our design so that it is as close to 100% reliable as we can make it. Here's our thinking about the next phase of the project.

As mentioned in a previous log, Phase Three will try and simplify the connection between the sensor and the communications tower. We're starting experiments to see if we can use coax cable to send power to the sensor along with carrying two-way RF communications. We're also looking into the possibility of replacing the battery pack with a small solar cell and supercapacitors. A small efficient cell glued to the PVC with an adhesive like E6000 could provide more than enough energy, even on an overcast day to run everything. The supercapacitors would only have to be large enough to power the unit overnight. Our rough calculations make us think that this would not be any more difficult to make, or cost more than our current system. But there would be big advantages to the people using them and maintaining them. The units would never have to be opened up. The batteries in the current design have to be recharged about once a year. In most devices changing a battery is no big deal, but we had to go to some lengths to protect the batteries from the elements and rough handling. The batteries are secured with nylon cable ties and wooden blocks and then wrapped with Parafilm and bubble-wrap. The batteries are stored in a separate compartment made from PVC pipe and connectors. Instead of permanently connecting the PVC components, the final component is attached with a lubricant and a set-screw. This makes a weather-proof seal, that is difficult, but not impossible to open. A solar powered device would not need the extra chamber or the yearly servicing. 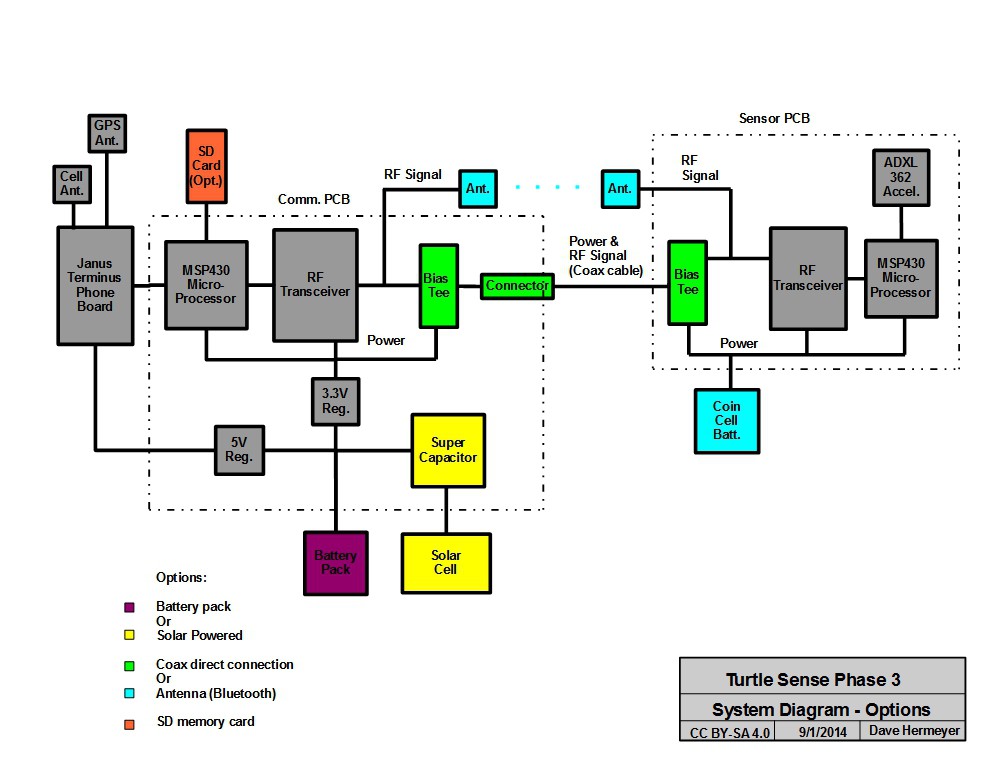 Each color represents a different option for future enhancement to the project. The grey blocks are almost the same as the Phase Two design, with the exception of an RF ttransceiver replacing an RS485 transceiver. This could be any low-powered RF device, but we are leaning towards Bluetooth LE because it would allow us to create a platform for interactions with passersby who want to know more about sea turtles and our technology.

Since we are considering using RF transmissions over coax, it would be possible to modify the design for wireless connections between the Smart Sensor and the communications unit. This is represented in the diagram by the cyan blocks. The most difficult part of this would be creating a power supply for the egg shaped smart sensors. A rechargeable battery could be embedded in the design with some way of charging it, or a coin cell battery could be used. Both of these options would not be easy to implement. Since the wireless solution will still need an antenna, it might be possible to have a short tether to a power source and antenna. This might be useful for monitoring the nests of some above ground birds and reptiles. It might be possible to put a solar cell in the egg sensors and cast them with clear acrylic instead of polyurethane. The devices need so little power to function, they could probably work with just a minimal exposure to light. This configuration might work well for monitoring bird nests.

Researchers have already asked us about the possibility of having our devices function as data recorders without the option of having the data phoned in. This option, to have data stored on an SD card (shown in orange), would not need the Janus phone boards and would require much, much less power as a result. We already added a provision in our design to be able to hook up auxiliary boards with UEXT connections made by Olimex, but we have not done any work with any of those peripheral devices yet. Olimex makes an SD card auxiliary board, and we'll make sure it will work with our next design. There are also display screens that could be plugged in.

The main reason we have not used any peripherals with the communications board we've already made is because we ran out of code space on the 16K MSP430 processor. Our Phase Three boards will have either a 64K or 128K version, both of which were recently released. The additional code and data space allows us to offer more options, peripherals and error handling along with enhanced data collection, processing and reporting possibilities.

A mass produced version of Turtle Sense would look almost the same as our current version. If we can make it solar powered, the lower chamber that holds the battery would go away and it would look like this: 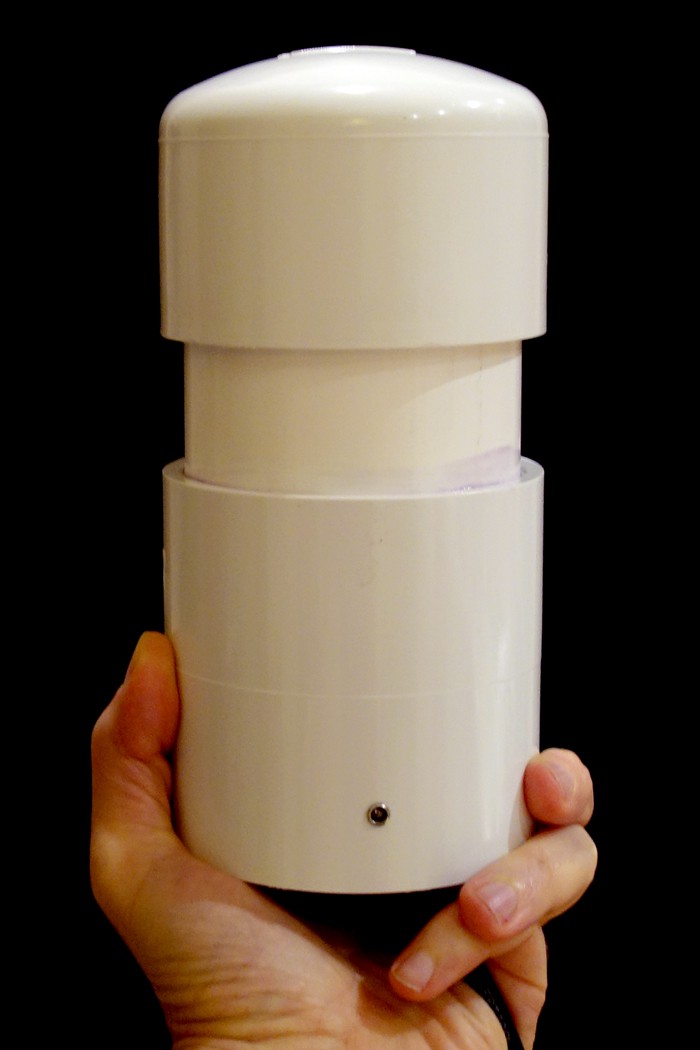 We'll look into getting a custom cap made to make the top clear or translucent so that a small solar cell could be sealed inside, if not we'd glue a small cell to the top pointing up.