The algorithm presented on the project description is, in fact, a special case where both addends have the same range.

In the colorspace decomposition algorithm however, there are 3 addends, with the same boundaries but the intermediary sum Cgb has twice the range of the R component. Combining R and Cgb creates a new set of problems...

First : one addend's boundary is larger than the other. The algorithm requires a clear ordering to work, so we must swap the operands in a preliminary step, if the order is not respected.

Now that it's out of our way, we can focus on what to do with these data and what happens to them.

Let's focus on the data table of the Project Details Page.

What this amount to, is: a square of side n, cut in half at the diagonal (that corresponds to S==n). One half of the square has a normal numbering of the columns, the other half has a reverse numbering.

In a geometric sense, this amounts to cutting the square at the S=m diagonal and moving the lower/reversed part away from the higher part, creating a new zone between them. 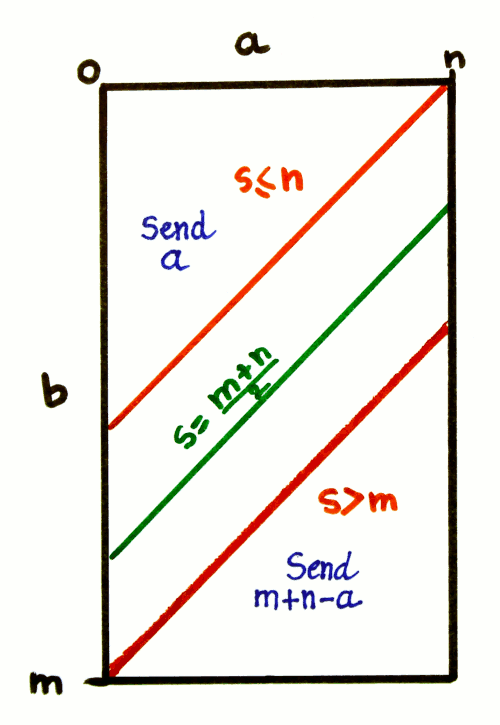 The diagonal of the square is the place where two things happen:

However when the limits are different, these two things do not happen at the same place anymore.

These tests can be run in parallel, but also in series, because the conditions are co-dependent: n < l/2 < m. The code segments can be merged:

Of course, the decoding is symmetrical, it reuses the same formulas to compute the requested range and adjust a.

This general algorithm works for m=n, and the special case presented in the main page is just an optimisation and simplification. The special case is faster and more compact but the general case is more powerful and potentially more efficient.

In the context of 3R, when m != n, the trivial approach for encoding one of the data is to send the one with the smallest range. The above algorithm goes further:

Taken together, these elements significantly increase the packing density with no pathological case or increase of the original data (to be demonstrated). These improvements would be impossible without the knowledge of the respective limits of the operands.

To reverse or to not reverse