Research results show that an athlete experiences a 20% decline in his/her physical performance when athlete’s body is dehydrated by 2% and a 30% decline when the dehydration reaches 5% of body weight [1] [2]. Developing a wearable sensor that detects body dehydration in real-time and notifies the athlete about the exact amount of liquids to be taken, would allow the athletes to perform better. The potential customers of this device are professional athletes, marathon runners, cyclists, and tennis players. There are a number of ongoing researches to develop a wearable dehydration sensor, however, there is not any commercially available wearable product for the time being. Since there is not a competitor in the market yet, this device would be successful with an effective marketing strategy. The expected time frame to develop a prototype is 1 month and a company may be founded for manufacturing and marketing.

This product addresses professional athletes both sportswomen and sportsmen but in fact, it can be used by anyone who does a cardio sport. Chris Jones – England Athletics CEO – stated that there are 131,000 athletes who paid a registration fee to become a member of England Athletics, in 2014 [4]. The research findings of Sport England show that in the UK, the number of people who do a moderate intensity physical exercise at least 3 sessions a week has raised by 1,400,000 over the last 10 years and reached to 7,761,000 people between October 2015 and September 2016 [5].

The commercially available device that is used to measure TBW and body fat is called bioelectrical impedance analyser (BIA) which can often be found in gyms. However, this device is not wearable, costly, and the measurements alter depending on whether the subject is on an empty stomach or not, and also the amount of water intake. There are some researches have been undertaken in order to develop a wearable measurement device, some of these devices are patented and others are in the patents application process nevertheless none of these products are commercially available yet.

The dehydration sensing device that is presented in this document provides a low power real-time monitoring method. It is lightweight and wearable, and it displays the dehydration level on a smart watch where the data is transferred through low-energy wireless communication. The cost estimation to produce 100 and 1000 devices is given by Table 2-1. Note that, price of a smart watch is not included which can be purchased for £21-£51 [6]. 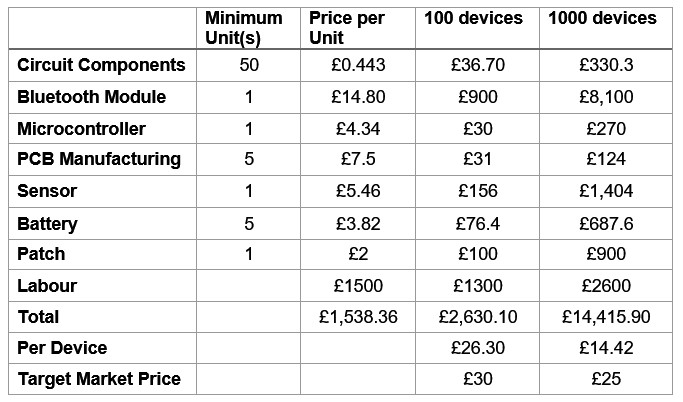 There are two methods to measure TBW and hence the body hydration of an individual. These methods are dilution and equilibration, and BIA. The first method, dilution and equilibration, is a chemical sensing method. This method was used in the proposed dehydration sensing device since the results obtained by the second method, BIA, are not accurate. BIA method relies on the flow of an electric current through body skin which makes this method inaccurate since the skin impedance is subject to change, e.g. loss of water increases electrical resistance of the body [8].

There are a number of patents and patent applications that already exist in the field of measuring dehydration by a wearable device. The visuals of these products are provided in Appendix.

North Carolina State University developed a device to measure the skin impedance by attaching a flexible electrode which is an Ag Nanowire sensor. Then, the processing circuitry calculates the hydration level of the subject. This sensor can be attached on the wrist or as a chest patch.

This device uses a BioAware sensor which consists of white LEDs and an array of photodiode which emits the reflected light...