Yet Another Minimalistic One Instruction CPU SUBLEQ means SUBtraction jump on Less than or EQual to zero.

Had a sleep on the schematic issues and decided to make few changes.

Here is the updated Reset/Clock/Decoder:

And the Timing Signals: 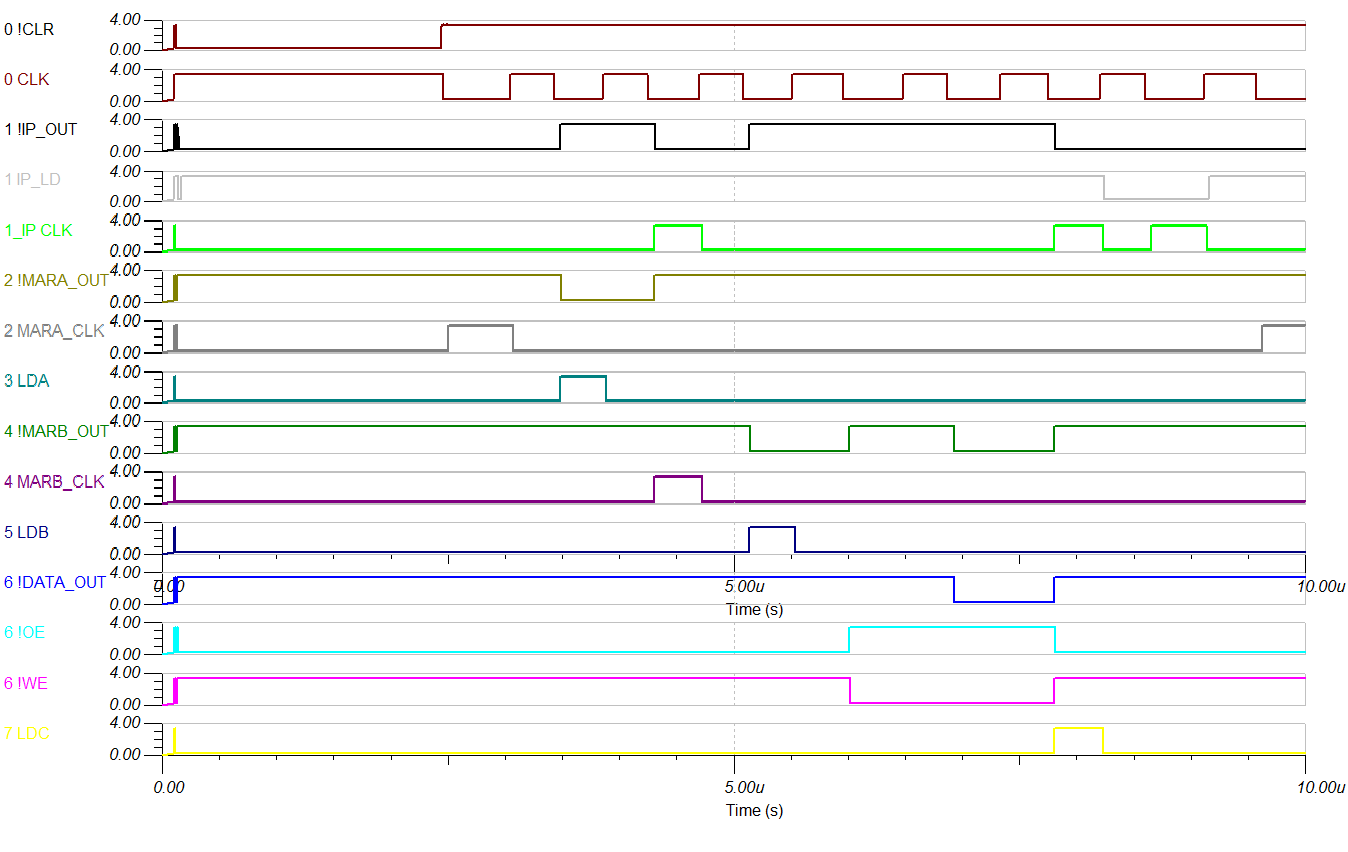 Here is the Memory Address Register and Instruction Pointer:

Unfortunately the 74LS373 does not seem to be working in TinaTI so I can not test the circuit(?). In theory the simulation is an infinite loop (Subleq 0 0 0). And finally, here is the ALU: 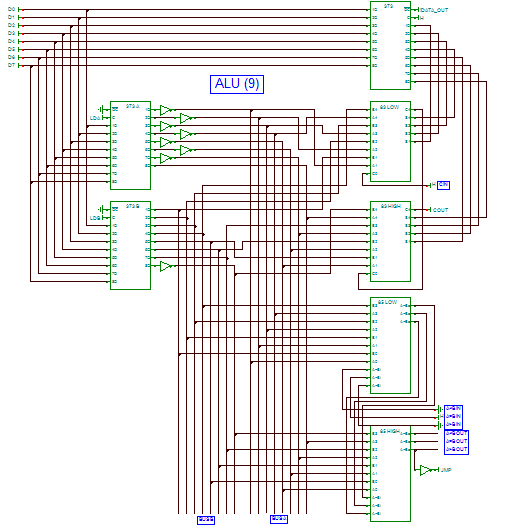 Here is the updated ALU: 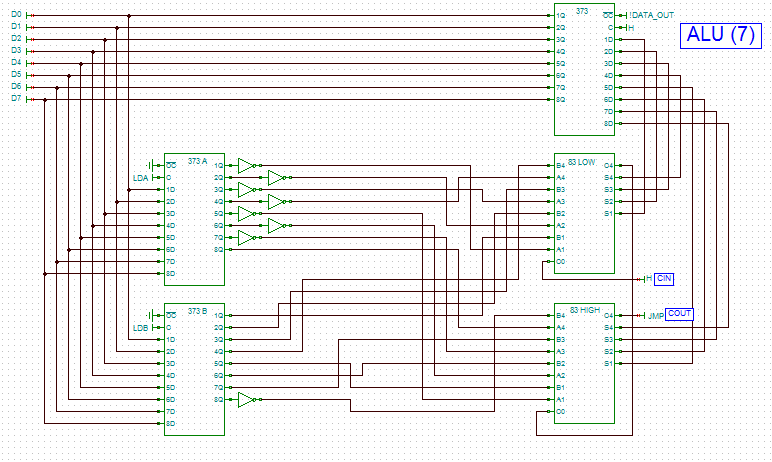 Bus conflicts are not usually a problem with simple systems as they do no damage. The reason is that TTL signals cannot supply much current (100s of uA). But an Arduino can supply ~100 mA so a bad bus conflict can do damage. I blew up my 4 Bit CPU RAM through careless testing of the memory (I have since modified the write cycle to solve this problem). 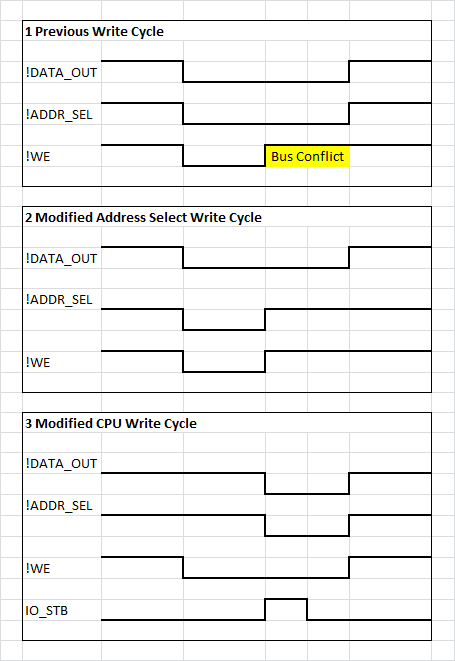 In case (3) the write cycle is less than ideal for latching registers so I have added an IO_STB signal o the decoder schematic (which can be inverted for IO_CLK in necessary).

The problem with PCBs are:

So what is PCB/bus planning is about: 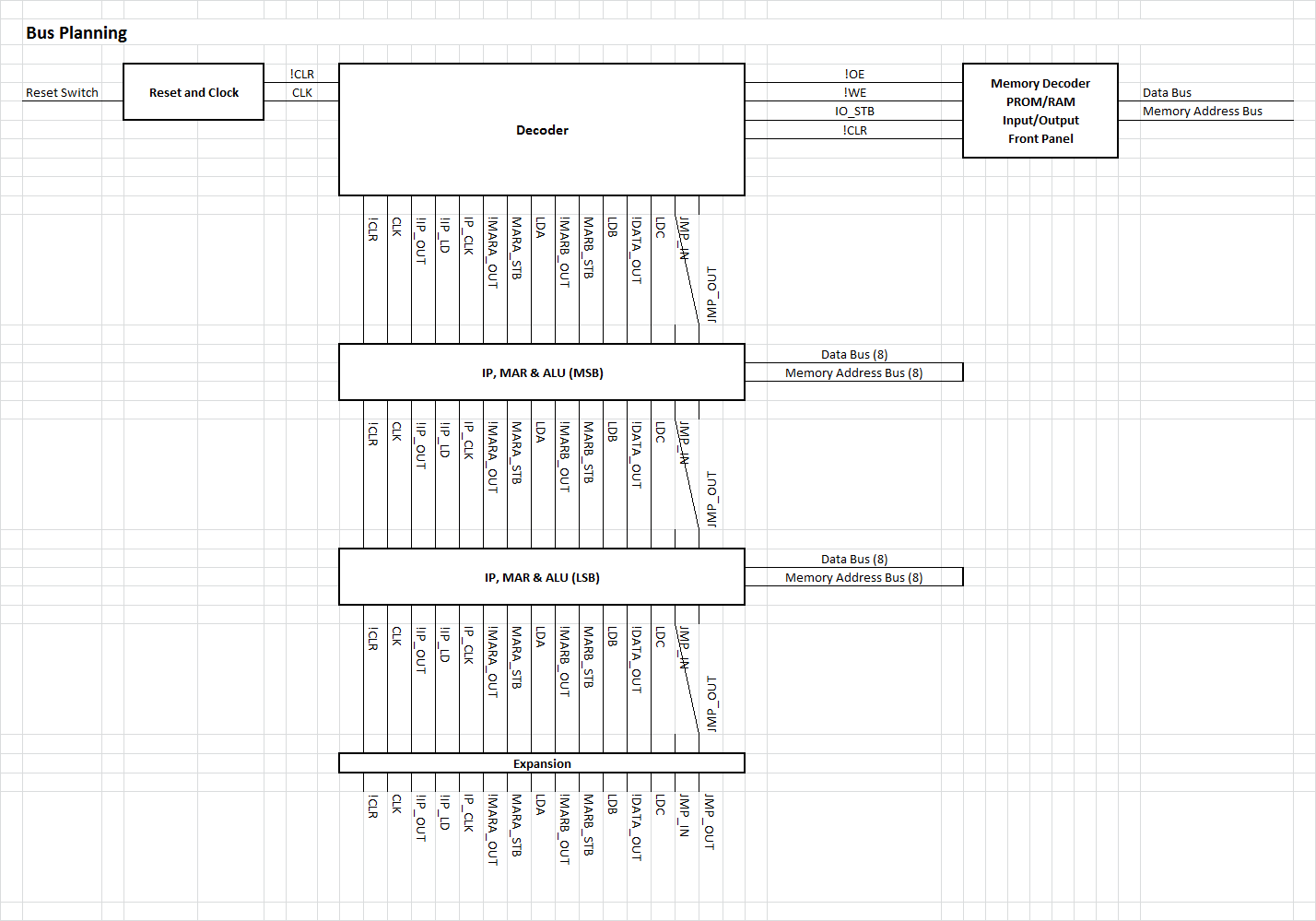 You can see that I have:

Here is the updated schematic with provision for expansion: Well I can say that it is not often a project get simpler as you progress!

I swapped back to 74LS374s were I could and got the 74LS373s working (just!). I am really pushing my luck with TinaTI! I have got the simulation to execute the infinite loop which pretty well says I got it. The address bus and to a lesser extent the data bus is a glitch mess. I will have to analysis the decoder signals more closely, to find out why. It may just be TinaTI warming me it is close to falling over again. Here is the latest schematic: I have swapped out the schmitt trigger relaxation oscillator for a gated crystal oscillator and the three 74LS74 D-Latches for a 74LS161.

The signals look okay with an 8 MHz crystal. The crystal oscillator is a little unusual in using a schmitt trigger for the active component but it works well.

I have swapped the strobe signals back to clock signals.

Some tweaks with the ALU carry in and carry out.

I have great expectations for this CPU so I will go to 16 bit up front (two 8 bit stacks).

I need to make up the PROM/RAM/IO board and work out how I am going to interface to the system. I want to do more with this CPU than a Front Panel is reasonable for but have not worked it out yet. Still I think I am ready to get the first set of boards made.

I am not using a Front Panel for this CPU but I still need a way to program the system. One options with a monitor program, seem to be:

Without a monitor program:

Direct Memory Access (DMA) requires a Hold and Hold Acknowledge (like the 8080 system). If the machine cycle has a tri-state at the end of the cycle then I could gate off the clock. I can use T8 by making !OE high instead of low. T7 (the cpu has machine cycles T0 to T7) is only used to advance the IP or to set the IP with the C register (all internal operations) so the !OE does not need to be low.

With DMA, for development programming (i.e. debugging) an Arduino can program the system.

Reworked the decoder for DMA using HOLD and returning !HLDA (hold acknowledge). The the CPU stop in T7 and the data and address bus go tri-state. The control signals all go high (multiplexing these will have to be done at the memory decoder).

I had to revert back to the old memory write logic (again the write logic will have to be modified at the memory decoder).

So here it is: Here are the HOLD signals: 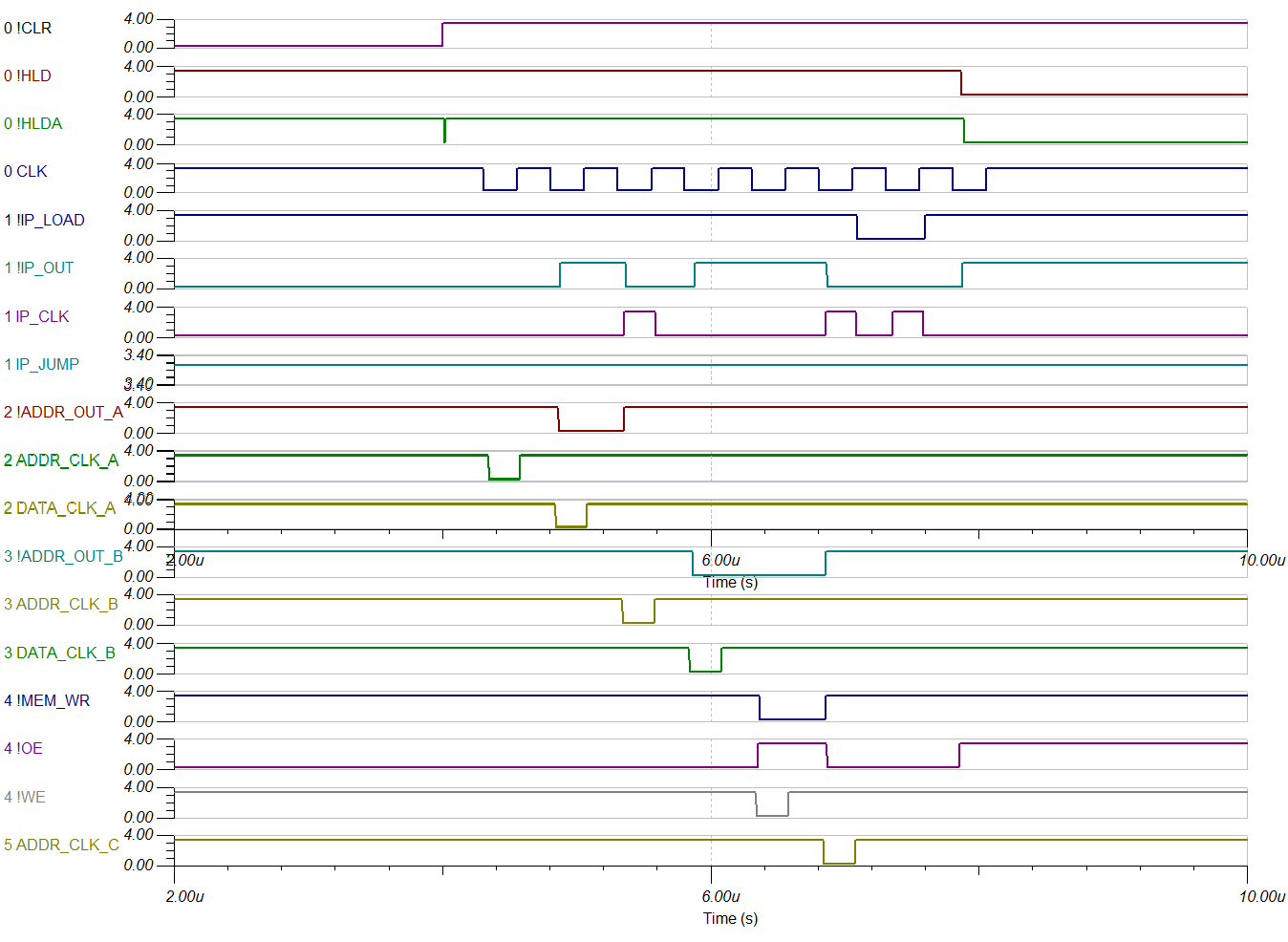 There is a glitch in the !HLDA from the !CLR signal but it is not material.

Back to a simplified 8 bit version

I was running around in circles so I gone back to the simplified 8 bit version. Being 8 bit a Front Panel will be fine (i.e. programs will not be very long). Here is the final 8 bit version that is ready for prototyping: 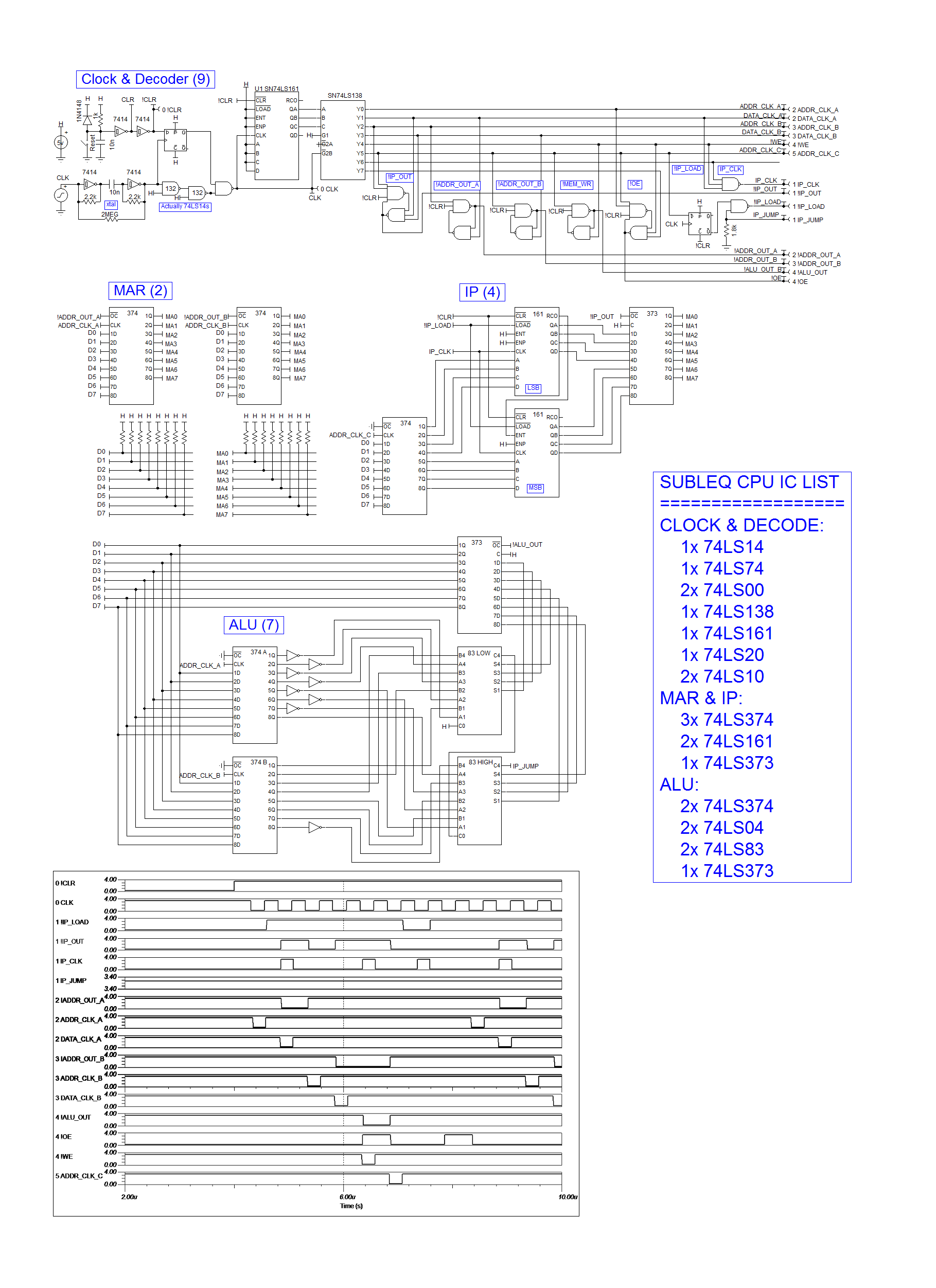 It still does not work in the TinaTI simulator properly but the timing signals look good and I can't find fault in the MAR, IP or ALU.

Now I remember, TinaTI has a limited network depth search. I ran into this problem before. I suspect that the Decoder is more complex than before thus the 74LS373 that used to work before no longer works.

Here is a basic Front Panel added to the schematic:

The Front Panel's RAM decoder includes the !WE fix to limit memory conflicts. Unfortunately, the IO write will not work with the SUBLEQ write cycle so will need to be modified. This design assumes momentary contact switches but I will have to use toggle/slide switches as PROM memory space is a super premium.

I want to rework the Decoder to delay the ALU write (to the B address) to after reading the C address so that I have the option to use the high bits of the address space for opcodes. Obviously not for the 8 bit version of the SUBLEQ CPU.

The easiest way for the CPU to talk to the external world is to parallel read and write to a port. To do this without timing or control signals is possible if one character is used a marker. May as will use \0 or "null" character. The output stream would consists of sequential characters at any speed (within reason). The CPU (when receiving) would detect a change in the character to signal a new character. Easy, but what about duplicate characters. Easy, insert a null between duplicates (but ignore the null). But what if I want to send a null, bad luck! Not really, we could use an escape sequence such as '\' as used in C code.

Here is the updated CPU schematic (no IO): 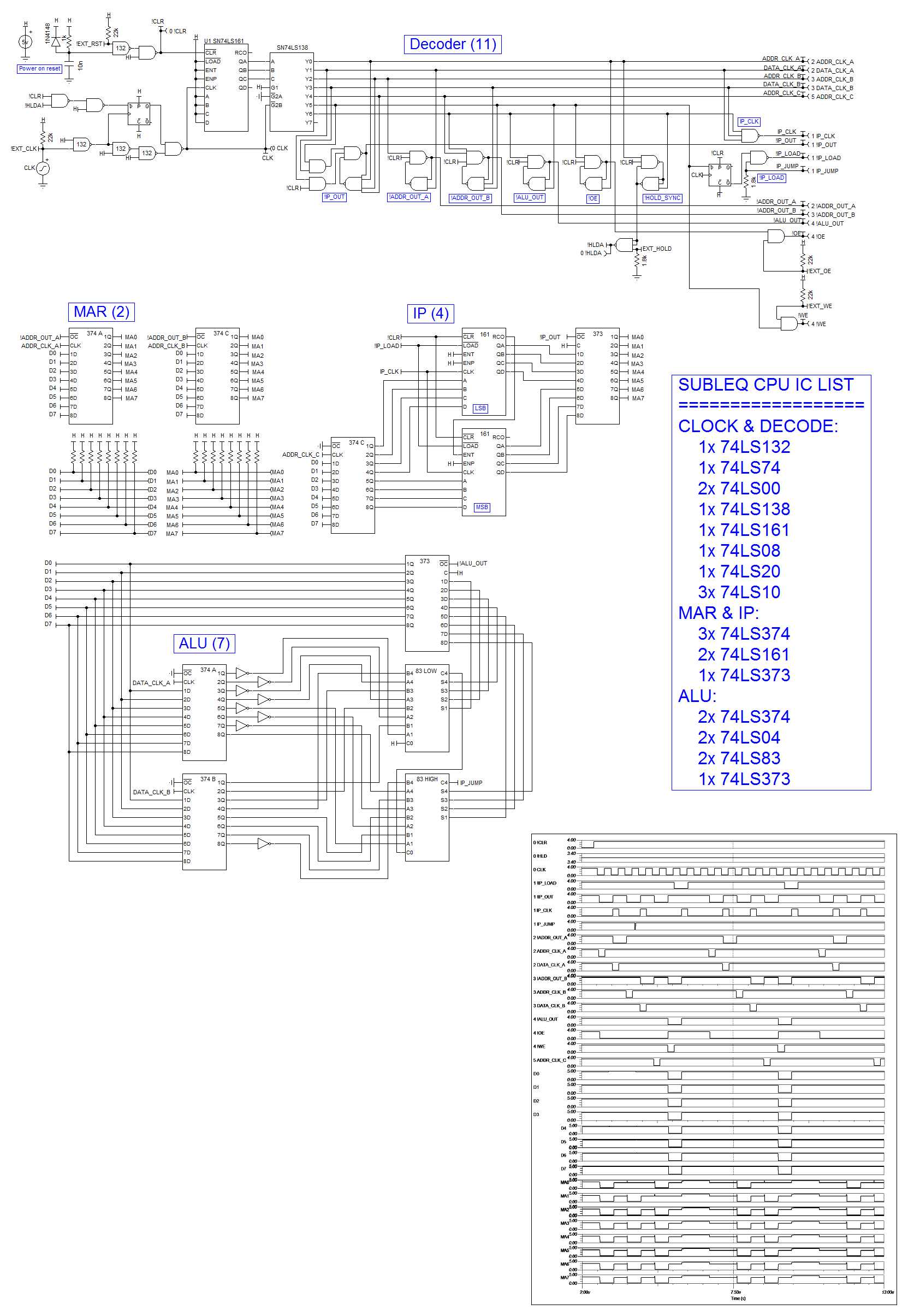 And here is the timing signals: 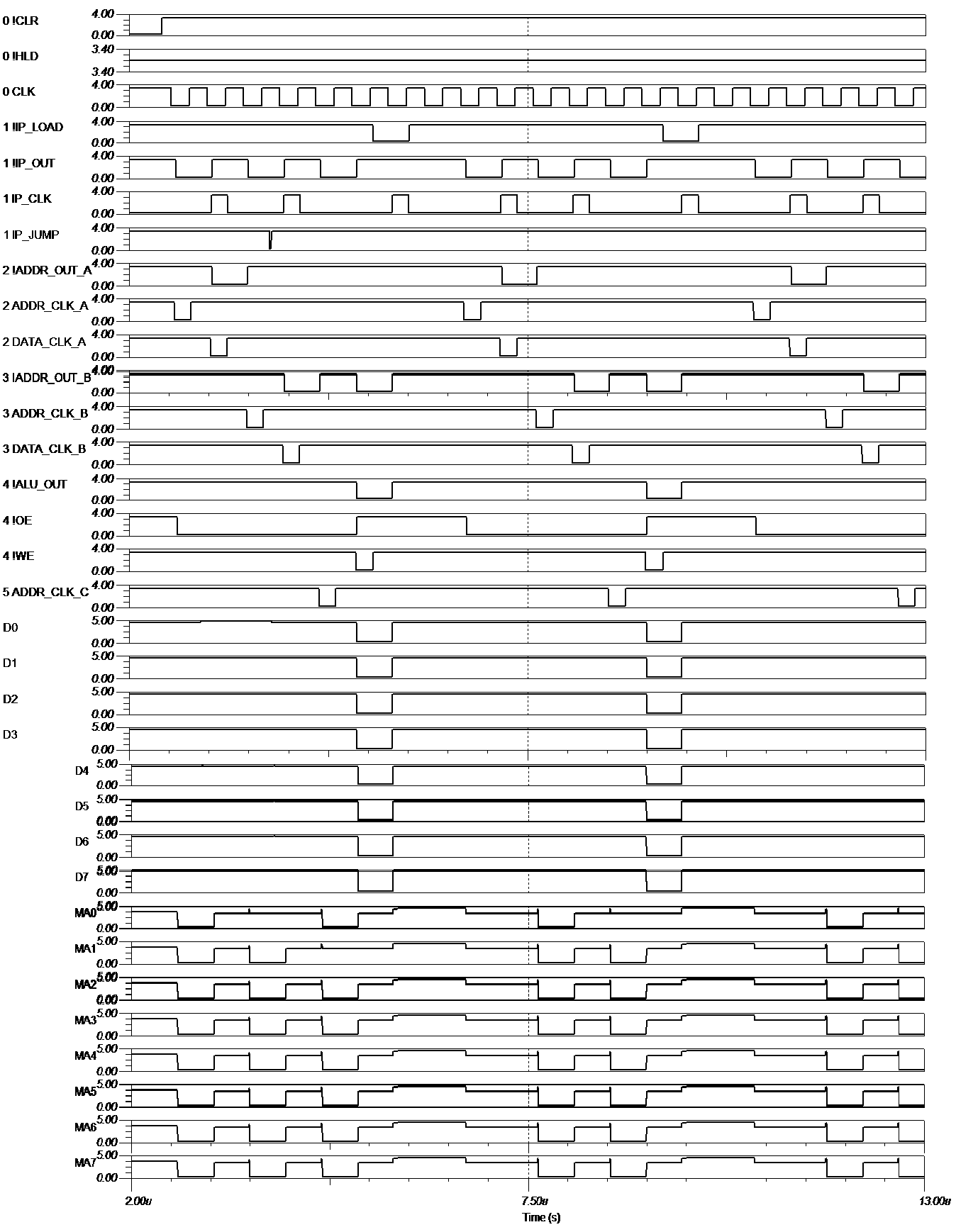 Hi Yann,
The more I get into this CPU the more magical it gets!
AlanX

I love your magic !

Wow it's getting... exciting !