I'm a former Romanian HW engineer and I recently moved to Papua New Guinea for a few years. While being involved here in some technical works, I had the opportunity to travel a lot into the remote jungle sides of this country. In the rural areas, people are trying to develop better living conditions here and to begin to use some small solar panels and some lead acid batteries to power a few lights and maybe in some cases, charge their mobile phones. The technology is many times too expensive for these places and people are ending up connecting their refurbished solar panels directly to some old car batteries. This dangerous practice for a desperate cause to light up some 3W light bulbs at night, leads many times to setting the batteries or the houses on fire.

A fairly technical and good solution would be to design a low price adjustable and multi-purpose DC to DC converter power supply that is very simple to use. My idea is to have a small 40W custom built solar charger that has the possibility of converting into a battery to device power supply that can allow multiple voltages at it's output. This multi-purpose tool could have an AGM battery charger implemented in it's menu and it could also have a Li-ion battery charger.

The aim would be to create this tool for the masses at a low price and keep it under 10$ so the people of these places could afford to buy it.

The potential benefits of having such a device are enormous. Some of them would be:

Tools to be implemented within this device:

Planning to add a sub menu in the software that will be able to act like an AGM solar charger. The Scorpion 3.0 should be able to provide the floating voltages of 13.6V - 13.8V

Planning to be able to set from the menu a Li-ion battery charger. This function could allow the user to configure the number of cells or the nominal voltage of the battery they want to charge and to be able to input the C parameter of the battery. Scorpion 3.0 should know what to do with these numbers.

This leaves me with the need of implementing four sub-menus in the graphical interface of the display, as follows: 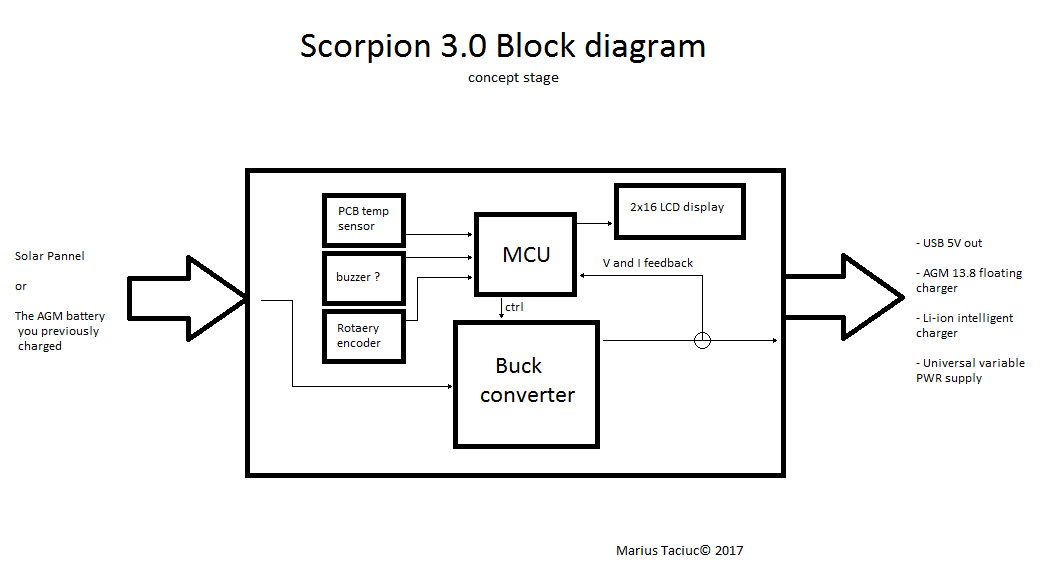 I realize that this design must be water proof. In these areas, the measured humidity exceeds 80% almost everyday. I realize that having a piece of electronic - whatever thing - inside of a coconut leaves roof house, can lead to water being splashed over the case. After I will have a mature design, I plan to cover the PBG with a varnish or a can sprayed laquer or something. I plan to 3D print the first cases and to keep in mind that I have to make them as tight as possible. I’m concerned that the display will have to come out of the case and this will lead to some gaps between the case and the edges of the display. I will see about this.

I’m not planning to add any fan or heatsink to the converter, so this automatically means that I will have to aim for an efficiency factor of over 90%. I’m planning to be able to build this box to switch about 40W and this still means that in some cases I will have to dissipate 4W on my PCB inside of a PLA plastic box. Wish me luck! Maybe I can use the frame of the LCD to take some heat out. By the way: the air temperature here is around 32⁰C indoors (in average during a normal day).

The Buck itself is a cheap and simple design, but is has some problems and shortages. It is a well known fact that usually, the mosfets are likely to end up short-circuited if they fail due to high current or/and junction temperature. A short circuit between the input and the output of the Buck converter means automatically that I will toast my mobile phone if my design ends up in this situation. Having the OL voltage of the solar panel directly connected to my output device is not a nice thought. I must definitely have a thermal protection and a current sensor. I’m concerned because I’m not very sure how fast I can make the circuit shut down if something bad happens. Will this mean that I will have to add a secondary mosfet to the input to switch the Frankenstein off? This remains to be investigated. If I fry my phone in a couple of weeks from now, it’s all for a good cause. :)