More Detail: How I Intend K2DX to Help Bring Up K3

The Kestrel-2DX, a specific embodiment of the Kestrel Computer Project (also on Hackaday), will help with new hardware bring-up.

Once I get the Kestrel-2DX to a point where I can interact with it and program it live, I intend on starting work on bringing up the Kestrel-3.  But, to do this, I need access to external RAM chips, so I can play with more than 24K to 48K of memory.

Everything discussed herein applies equally to the Icoboard Gamma or to the MyStorm Black Ice.  Both have an iCE40HX8K-compatible FPGA on board, and are equipped (or can be be so equipped) with 1MB of externally accessible SRAM.  I'll refer to these boards as "the target" for brevity.

Perhaps one of the first things I can do is port the Kestrel-2DX design files to the target FPGA development board.  Alas, both of the target boards lack human-interface I/O ports like VGA or PS/2 port, so for now, we need a simpler I/O approach.

My plan here is to use my Nexys-2 as a terminal for the Icoboard Gamma implementation.  Thanks to both systems having at least one available, 3.3V, 4-bit PMOD connector, my current train of thought is to implement my SIA core on each of them, and get them both to talk to each other over a synchronous serial interconnect.  I should be able to accomplish a link by stringing over just five wires.

The Nexys-2 would consume PS/2 keyboard input and serialize it for the Icoboard; and, vice versa, it would serve as a remote frame buffer for display output purposes.  This kind of channel requires intelligence on either side of the link, of course, which means we could load additional telemetry functionality onto the link as well.

System software changes will be necessary to take advantage of this serial interconnect, of course.  I'm not quite sure how to implement these yet, but I have some nebulous ideas.  I'll discuss these later as time permits. 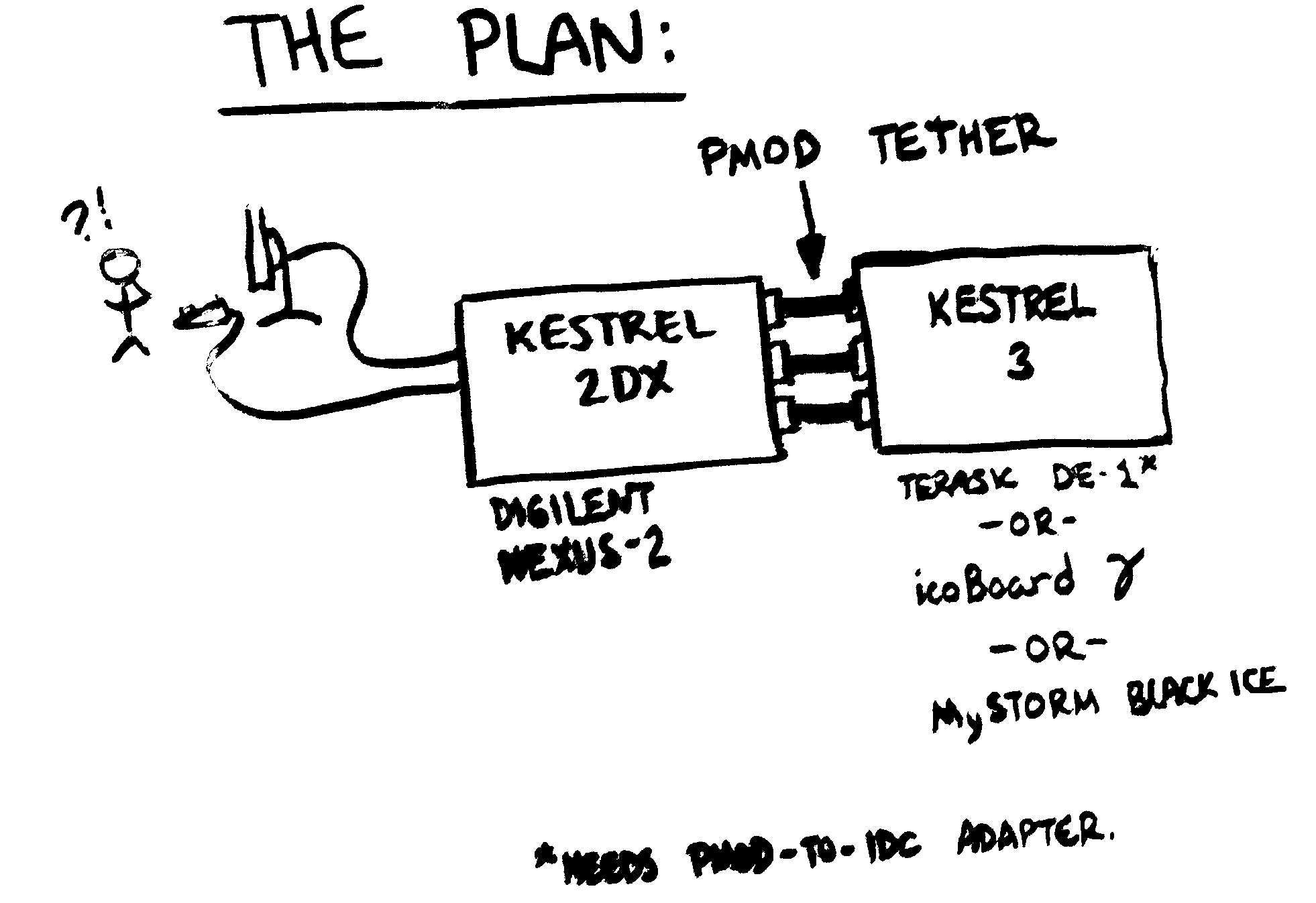 Once I have a remote system up, and have a working, interactive environment there, I can attempt to work on the CGIA video interface (Configurable Graphics Interface Adapter).  The CGIA is the MGIA's replacement, supporting features such as color, higher resolutions, and other features one would expect of a contemporary computer.  First generations of development won't have any blitters or GPUs; sorry.  For those old enough to remember them, you can probably get a good mental image in your head of the CGIA's capabilities by comparing it to the Atari ST 520/1040's "shifter" video chip.

Once again, system software will require retrofitting to take advantage of the CGIA.  I anticipate this should be rather simple; remember that the step prior required us to route bitmapped data over a serial interconnect, so by this point, acceptable video primitives and abstractions should exist in a state which can make this relatively easy to do.

After getting the CGIA-based system software running, self-hosted software development should then be possible (well, of course, after porting compilers and other development tools).  This would probably be my first "minimum viable" Kestrel-3.  If I can be so lucky as to port Fossil SCM over to the Kestrel-3 environment, that would totally be icing on the cake!

I've been having some fun recently with a blackIce board. It has loads of PMOD ports and it's easy enough to add VGA and PS/2 interfaces to those. (It's not zero cost and it's not integrated on board, but it's easy and cheap.)