So, what is hygrometry?

Relative humidity Φ (Phi) is the ratio of the water vapor contained in a volume of air to the maximum water vapor that could be contained in this volume at the same pressure and temperature.

Since the pressure exerted by a gas is proportional to the number of atoms it contains
(1 mole of perfect gas occupies about 24 liters in ambient air), the relative humidity can be expressed as a ratio of the partial pressure of water vapor Pvap and the maximum pressure, called vapor pressure Psat.

The vapor pressure is a point of balance where there are always exchanges gas → liquid and liquid → gas, but they are equivalent.

When there is saturation, this ratio is obviously 1, or 100 %

Our objective is to stabilize the partial pressure of vapor at 72 % of the vapor pressure.

We will use an application of Raoult's law:

remark : In thermodynamics, ideality is a trick to say that everything that forces us to solve second-order differential equations are petty things and of little value.

In order for the solution to be ideal, the solute must dissolve completely without radically modifying its properties, divide it into different components, and the molecular interactions of the solute and the solvent should be similar, at least at humanly bearable temperatures and pressures.

Raoult's law can be expressed by the formula (8):

By applying the formula to glycerol, we obtain: 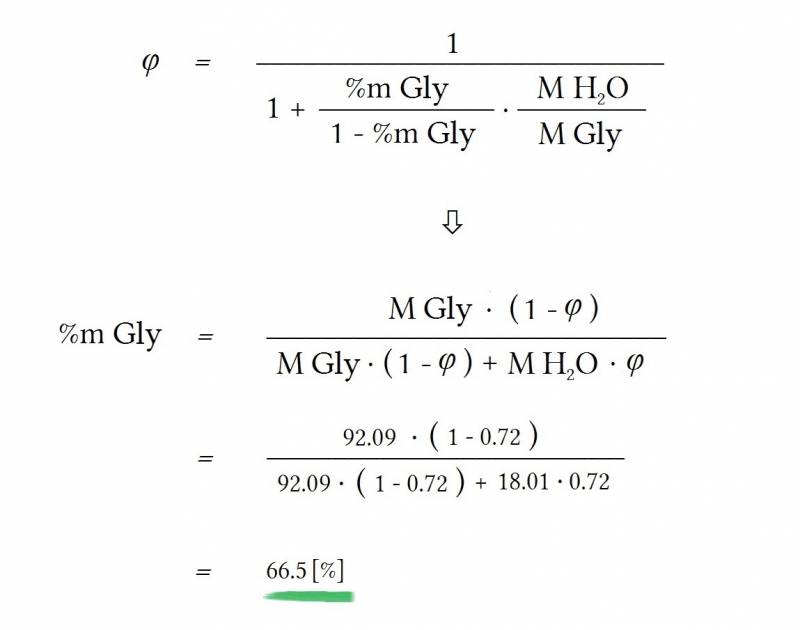 What ?!
A difference of 0.2% between a curve made from three measures and a simplified formula?
This is totally unlikely, for several reasons:

When we compare the characteristics of water and glycerol, it is difficult to imagine that they have the same behavior at the molecular level:

In addition, after having poured demineralized water into glycerin, spontaneous vortexes are created which suggest a change of enthalpy.

I haven't measured the temperature of the mixture, it is possible that it changes, as well as the volume.

The humidity stabilized above a solution depends on the temperature, whereas there is no trace of it in the formula, even implicitly.

The fan trick to control the temperature worked quite well, but if I had done the measurements at 20 ° C for example, I would have gotten different results. (9)

Hygrometers generally distinguish themselves by their remarkable imprecision. The manufacturer announces an error of + - 3% (1) which is yet not too bad, because even with serious material, one can hardly hope better than + -1%.

On the other hand, if it is so difficult to measure, it probably doesn't have much effect on matter, otherwise it would be easy to measure.

I used a cheap scale to measure proportions, I don't know its margin of error

I compared the two curves with their measurements done in laboratory. 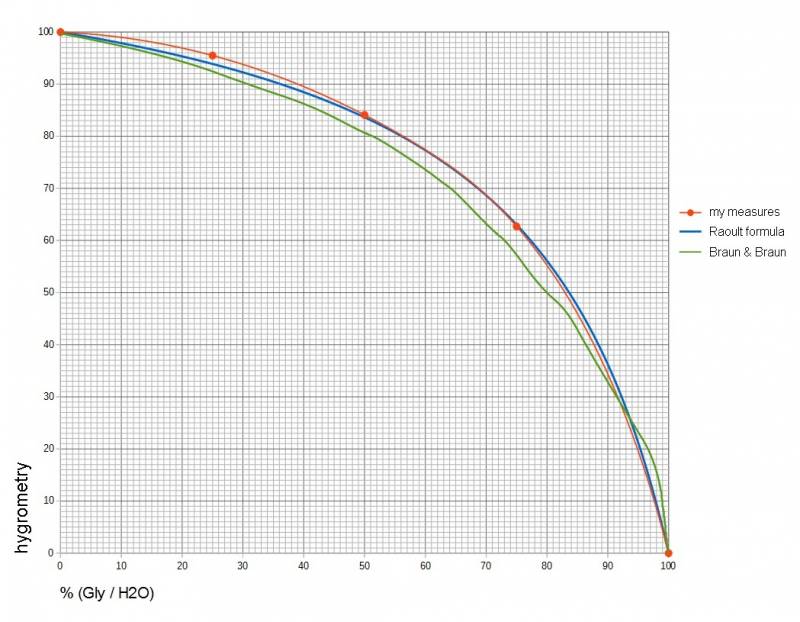 The green curve is them. By multiplying the measurements, I would probably have gotten such an irregular curve. We also note that 72% is practically the place where my curve crosses that of Raoult. It's not that I'm not happy about it, but it's the pure fruit of chance.

Now we only have to measure the hygrometry contained in freshly unpacked cigarettes:

Well I think I'll use the same mixture as before, otherwise it will be too obvious that I'm trying to save time.

7. In search of lost moisture