This is Resin's Beast! A cluster of 300+ Raspberry Pis connected together, and a platform for building Pi clusters like Computational Lego

The Beast is Resin's in-house cluster for testing product updates - Resin.io manages and remotely updates Linux IoT Devices like the RPi, so we use it to test our product.

We're opening this up because we envision using the Beast's building blocks like lego, as a platform for easily building clusters of interconnected devices.

We've made the design modular so it can be infinitely expanded (within the Limitations of Physics™), and to make it easy to shift from Raspberry Pis to other devices.

Continue to find out more!

The Beast is Resin's "house pet", yeah we are weird that way. But seriously though, it's our in-house cluster of a few hundred Raspberry Pis connected together, and managed and updated through Resin.io.

It all started in 2014 with the original Beast. We wanted to build a rig so we can test updates to a swarm of embedded devices in a controlled environment.

So we built one! We connected 120 Raspberry Pis together in their own network, and used Resin.io to remotely upgrade the application running on each device. One of the big requirements from the start was to have some sort of visual feedback so we decided to have the Raspberry Pis equipped with a screen and facing towards the user, hence the tower design. As you can see from the pictures, this is a true first version, glorious in its own hacky, scrappy look.

Here are some more photos of TOB - The Original Beast.

Then came the Beast 2, also known affectionately as The Dalek. Starting with Beast 2, we wanted to focus more on modularity and Open Source, so we started the design as an open conversation, and used our Blog as a sort of unofficial Build Log while iterating on the Beast 2, and communicating openly with the community. And thus, the Beast 2 was born. 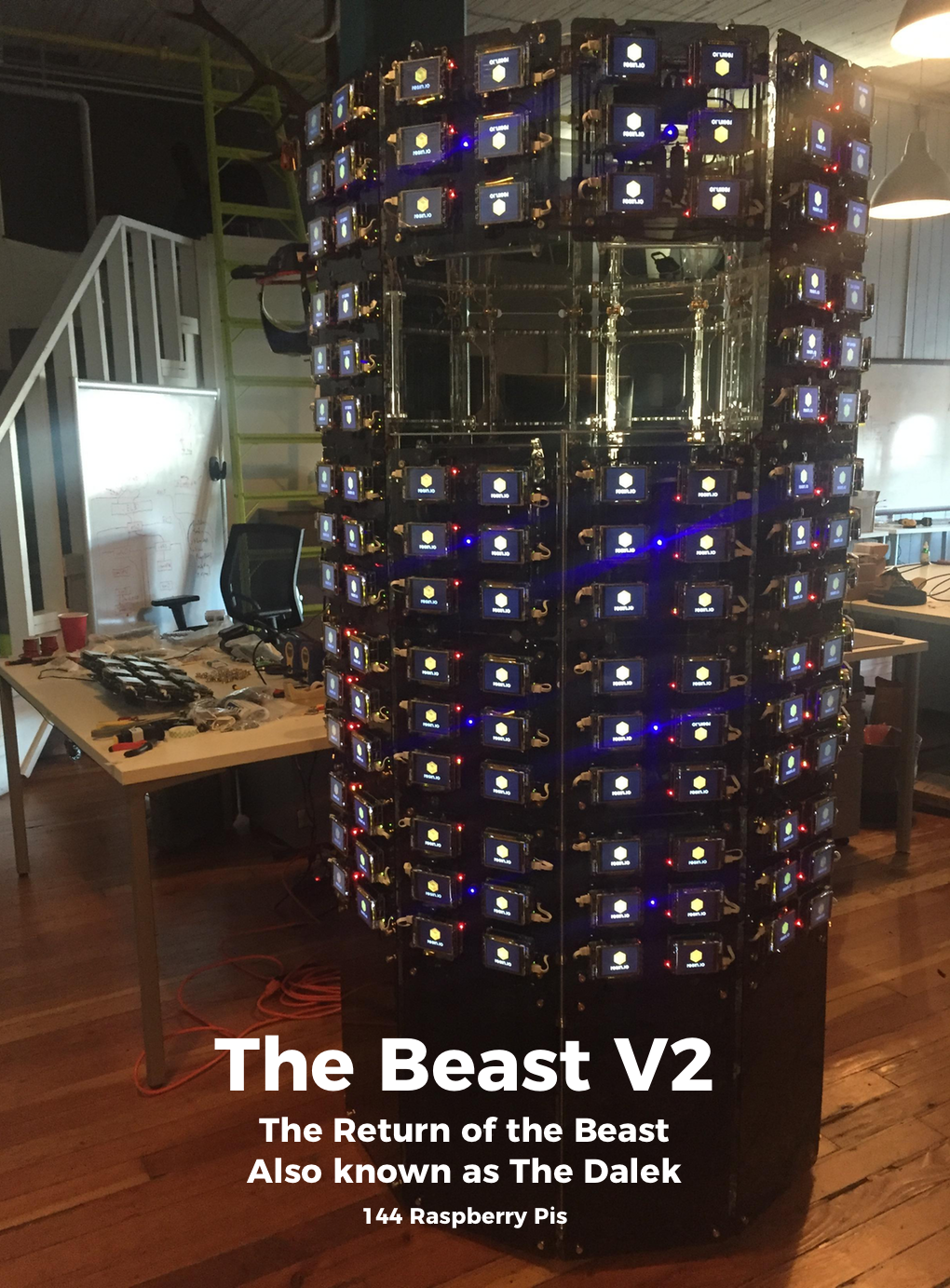 This time we bumped the Raspberry Pis to 144, and changed the wood frame for interlocking acrylic tiles, and better, which made the whole design more modular.

And here are some more pictures of The Dalek in all its glory.

And now, it's time for the final version of The Beast! In this third version, we have finally achieved the level of modularity we want, and we're ready to bring this to the world not just for us, but for everyone who's interested in building their own, and to contribute to the design. The one we're currently building will have 336 Raspberry Pis!!

Now first things first. Why are we putting this up on HaD? Because we want this to be an open design, and we made it modular so that people can build their own networks of Raspberry Pis (or ODroids, Orange Pis, Beaglebones, or anything they want!).

We hope you'll like it, and we can't wait to get more feedback! We'll be adding more info and updates on the Project Log. Follow us for more!

this would be cool with arduinos, not sure what it would do other than look cool tho...

336 RPis! That is nuts-o! What sorts of computational tasks can you do with such a cluster?

actually, we're changing that to a nice round number of 360 ;)

we're really open to the kinds of applications. this in its core essence is a demo setup for resin.io, so that we can test resin's remote programming and management of Raspberry Pis. But we do wanna make some interactive demos that take advantage of the displays, and we wanna try running some distributed computing stuff like a Beowulf cluster and/or Hadoop or sth similar.

360, wow! hmm.. distributed computing is something I know next to nothing about, unfortunately. I'd probably start with something blinky.

A robotic companion that serves as a friend as well as a personal assistant.
Project Owner Contributor