In the fourth attempt one of the seedlings developed a true leaf, but all seedlings died 5 weeks after planting. I believe that the cause of death was excessive CO2 concentration in the bottle.

In this experiment (started on 5th April) I'm taking an additional measure to reduce the rate at which the soil releases CO2. I have the same amount of water in the bottle (12ml), but I'm replacing some of the soil with green sand. The diagram below shows the setup for this experiment. The photo beneath this shows the layer of green sand above the soil. I’ve used green sand rather than ordinary sand because I believe it will hold more water than ordinary sand.

The idea is that some of the initial water in the bottle will be absorbed by the green sand, which won't contribute to CO2 production. The graph below shows the CO2 concentation for the first 11 hours of this experiment, compared with the fourth attempt. The graph does show a slower rate of CO2 release in this experiment. I've also measured the initial CO2 level for a longer period of time than in the previous experiment - I'll post details of this in a few days.

It remains to be seen whether the sand will affect seed germination. The seeds (3 this time rather than 5, because I believe that having 3 still gives a good chance that at least one will germinate and begin to grow) were placed into dimples in the sand and covered over with a small amount of damp garden soil to introduce microbes (I haven't yet experimented to see whether it is really necessary to cover over with damp soil - perhaps some microbes survive in the soil that I dry out on the radiator prior to putting it into the bottle?). In previous experiments the seedlings took about 8 days to appear, so I expect to see them on about 13th April.

The first green shoot was visible this morning. I’ve added LED lighting to this bottle, using brighter and more efficient LEDs than I’ve used previously (see log entry ‘More on artificial lighting’). I’ve used 3 red LEDs and 1 blue LED. I believe that the illuminated area is receiving about 100 W/m2. The LEDs are mounted inside the bottle. I had wondered whether using more powerful LEDs would cause the bottle to heat up too much. I measured the temperature increase at the surface of the soil and it was only about 1 degree C above the temperature in the room. The LEDs are controlled by a timer circuit which switches them on for 18 hours then off for 6 hours. Reflective mylar is wrapped around the bottle to help prevent light from escaping.

The first true leaf has appeared on one of the seedlings, first noticed on 25th April (20 days after planting). I’ve also noticed that the stems of the seedlings are redder than in previous experiments.

Note that the intention behind the three holes cut into the reflective mylar foil sheet was that one seedling would grow in each hole. One of the seeds didn’t germinate, and the seed in the middle hole ended up sprouting from the neighbouring hole, so although the two seedlings in the photo appear to be growing from the same place, but one has its root over towards the middle hole.

The seedlings are both still standing and a true leaf has appeared on the smaller of the two. The red colouration of the leaves has steadily increased, so the seedlings are now very dark red. I don’t know whether this is an effect of the light, heat from the LED, or the green sand. Apart from the red colour, they are at a similar stage of development to the carrot seedlings I planted outside over the weekend, which were grown in the conventional way. 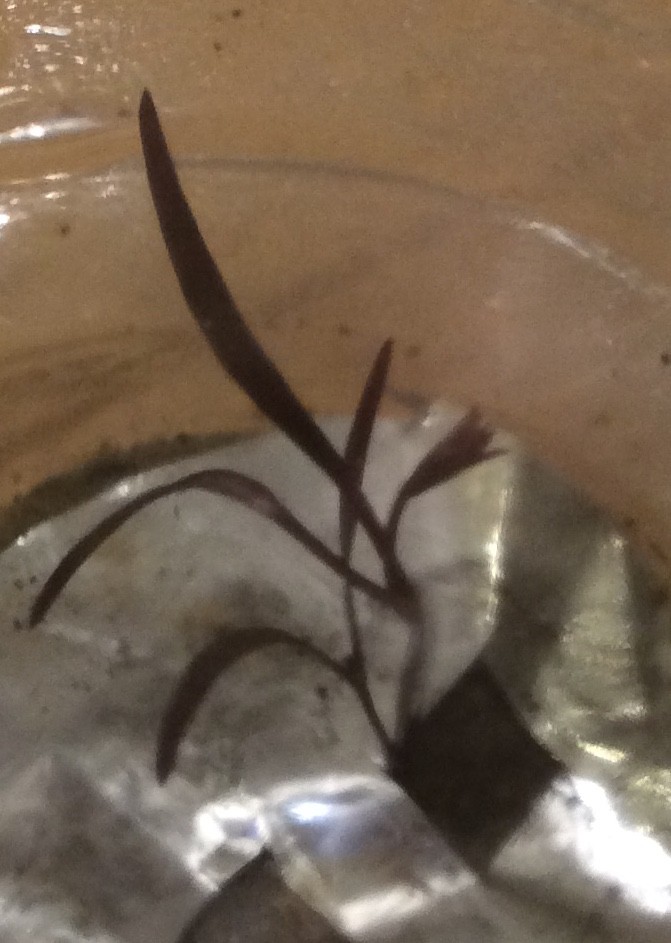 The seedlings are both still alive today, 39 days after planting, so have lived for longer than in any of the previous experiments, and are both more fully developed than in previous experiments. No second leaf has yet appeared on the larger seedling, and the seedlings are both still red. I have read about possible causes of red leaves in plants, and I believe that it could be because there is not enough water in the soil for the roots to grow very far. Below is an image of two of the roots. One root can be seen near the top left of the soil, within the dampest part of the soil. The other is growing diagonally downwards from the middle right of the soil, down into the dryer part of the soil.

I have deliberately restricted moisture in the soil to prevent CO2 overproduction, but now it seems that it may be a limiting factor. What can be done about this in future experiments? One possibility is to put water in the stoney layer at the bottom of the bottle - there it won’t contribute to initial CO2 production, but it will slowly evaporate and condense elsewhere in the bottle, and ultimately make the soil damper.

It’s now 56 days since the seeds were planted. The seedlings are still alive, but there has been no noticeable growth for about 2 or 3 weeks. The only obvious change is that the roots are more obvious around the edge of the container - I believe that the roots have continued to develop. My guess is that the seedlings don’t have enough water. Because the amount of water produced by soil microbes is proportional to the amount of CO2,  the level of CO2 in this bottle probably won’t ever get too high now: any extra water/CO2 produced by the soil will be used immediately by the seedlings. Rather than continue this experiment as it is, I’m going to measure the CO2 concentration in the bottle, then add some additional water and see whether that causes the seedling to continue to grow, and if so then whether it will also revert to a green colour (at the moment there is still some green visible in the true leaf of the larger of the two seedlings). I measured the CO2 concentration today and it was greater than 10000ppm. I also added 24ml of water to see whether this will enable the seedling to resume it’s growth. Some CO2 will have escaped from the bottle when I removed the cap to make this measurement and add the additional water - I attempted to minimise the length of time that the cap was off.

In reply to one of the comments below, here are photos of carrots growing in the open air in similar sized containers to a 600ml bottle. The first two pictures show a carrot that has been growing on a window ledge in a jar. In fact it’s the same one that I started growing in the log entry entitled “Artifical Lighting”: I replanted it in a jar and left it on the window sill after that. I was surprised at how many small roots there are in the jar, I didn’t realise that carrots have so many smaller roots in addition to the main enlarged orange tap root.

The next photo shows a carrot that’s been growing outside in a small cardboard container:

The root has thickened, even though there’s very little space. A couple of the leaves of this one turned reddish.

The effect of adding the additional 24ml of water was apparent after a couple of days. Now, 6 days later, it is very obvious. The first true leaf on the smaller of the two seedlings has grown substantially, and is green, except at the tips of the leaves. Both seedlings have developed a second true leaf (the second leaf on the smaller seedling is still small) and the new leaves are green: 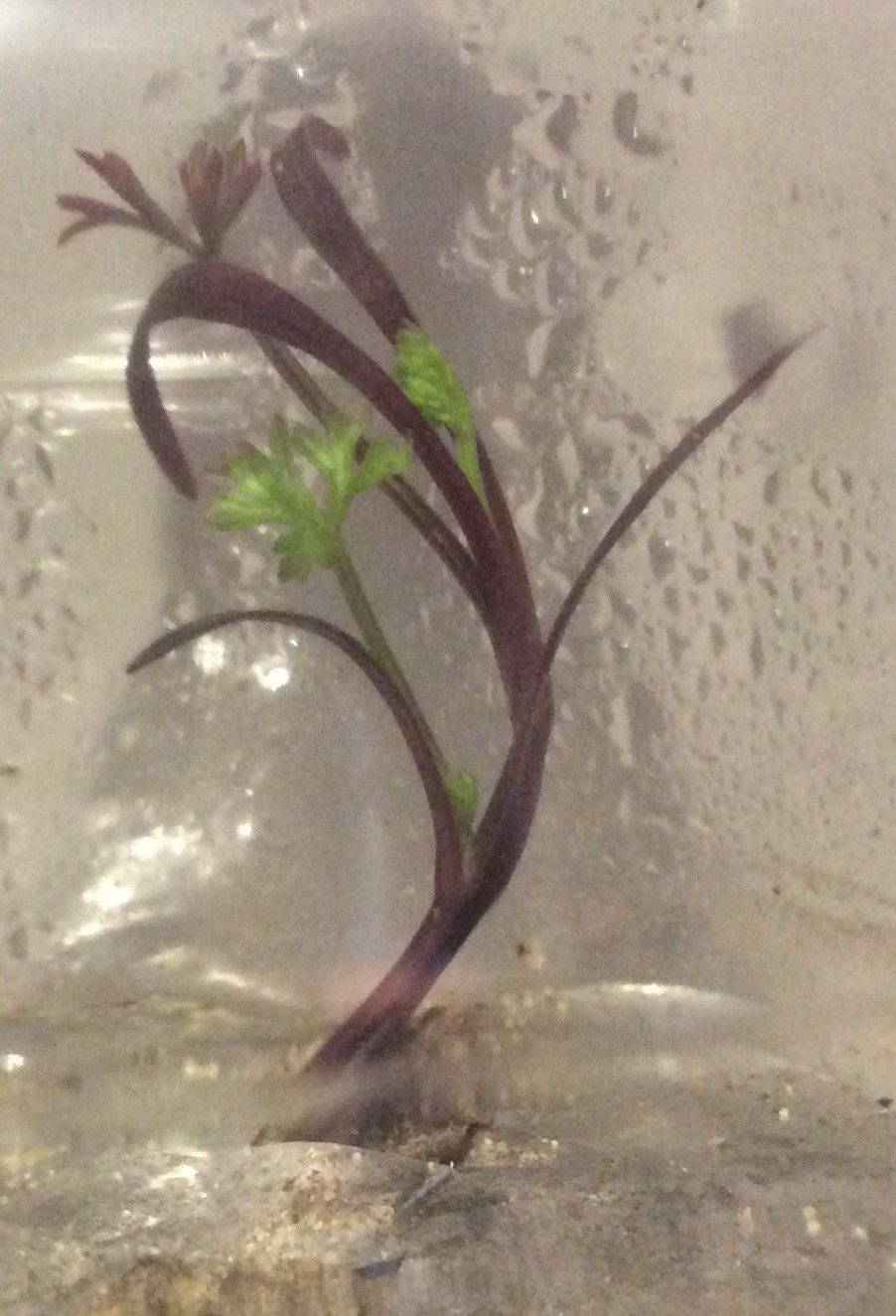 The photo below shows what the seedling looked like on the 23rd July. It didn’t die, but didn’t develop a very large root either. This years in-season carrots have just run out, so I’m planning to do some more experiments this winter.

Measuring CO2 loss from a bottle when the lid is removed

Isn't a 600ml bottle kind of small for carrots?  Carrot is a root vegetable, so you'll need deep soil for the carrot root to grow and there is also the leaves etc on top.  2L might be better.

My 650g yogurt container (4"/10cm deep) is too shallow for my parsley.  I didn't realize that it also has a carrot type of root.

Yes I think 2L would be better both for root and leaf space, and for potentially lower CO2 concentration - I had been thinking about switching to a larger bottle. Having said that, I have a carrot growing on a windowsill in a jar thats not much larger than a 600ml bottle, and another growing outside in tiny cardboard container: both of those make me think that I should keep going with the 600ml bottles for a while longer.

I have tried cool white (6500K) LED and it seems to help my window sill plants for winter here.  They are easy to find and don't look weird from outside.

Don't know much about carrots.  The red colour might mean that it can't form chlorophyll - could be nutrients, water problem or light?  May be should try a control experiment growing using same seeds, soil outside of bottle?