In a recent previous log (I know I have too much of these) I hooked up the NFT grow system after moving it into the basement. After completing the setup and running a circulation test I discovered the pump was undersized for the manifold. If the manifold were constructed fro 1/2" pipe the original pump would have been fine, rather than making a new manifold I decided to buy a new pump after some research on the subject. The replacement pump is a SunSun CHJ-3000 800GPH Pump: Over the course of this project I have been following all sorts of hydroponics groups on facebook and just passively absorbing knowledge and asking questions. This is when I realized the pump was too small, some nice guy shared this link with me http://nelsonwatergardens.com/choosing-the-perfect-pump/ it explains everything. After some on the fly head math and rereading of that article I settles on the CHJ-3000 and ordered it.

To get things started a dismantled the NFT grow system and took out all the parts I would be modifying/fixing. 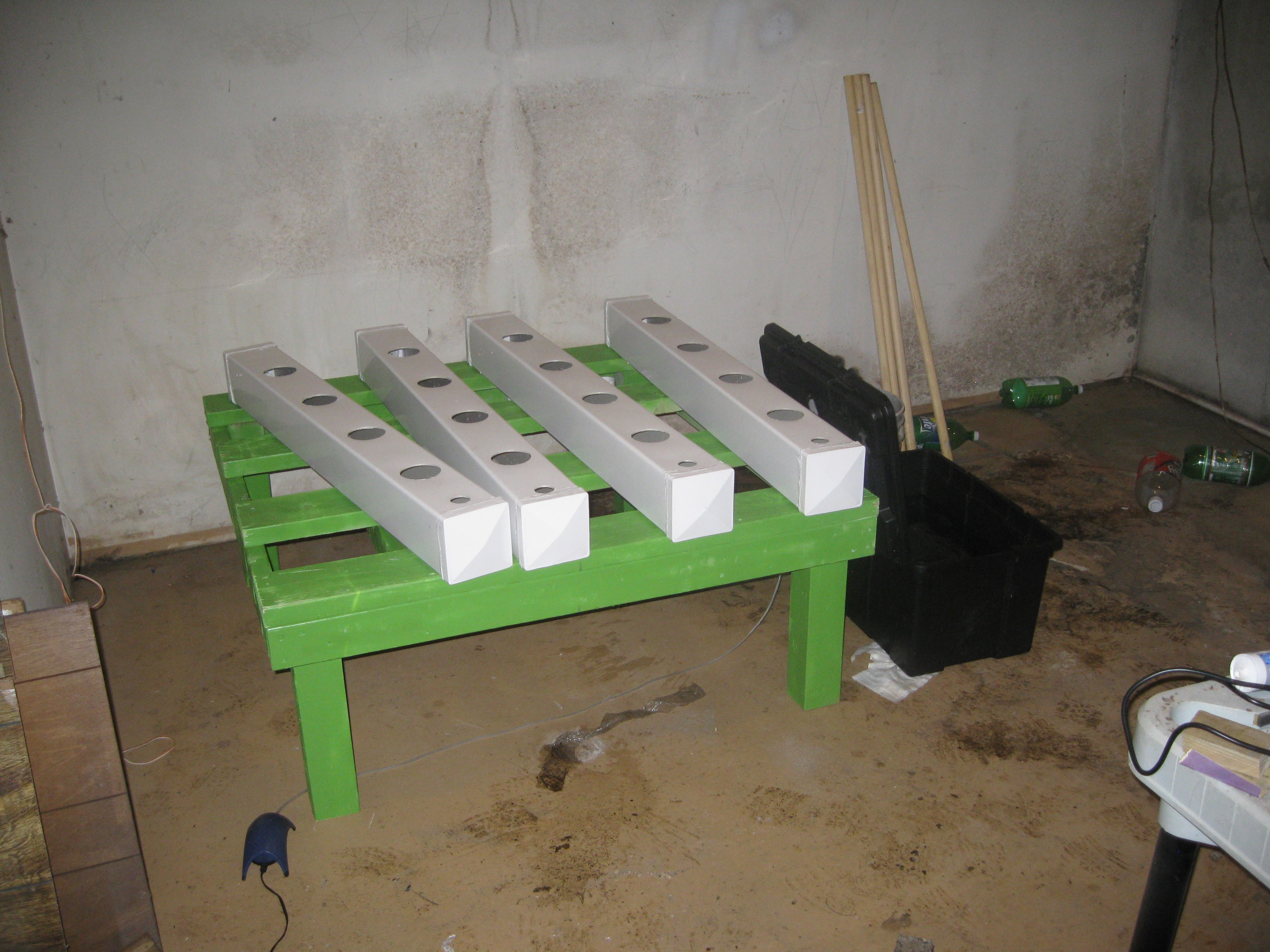 The original pump had a 1/2 inch barbed fitting for its output, the new pump had a 3/4 inch barbed fitting. At first I used some 3/4 inch tubing I had on hand to adapt the fitting down to 1/2 inch to hook into the fitting on the manifold. I used a blowtorch to heat the tubing slightly to fit it together. While the results came out good I decided this was a bad idea, I didn't want to go from 3/4 inch to half inch to 3/4 inch again, I just sensed that would be a bad idea so I set off to hack a solution together cause after all this is Hackaday! 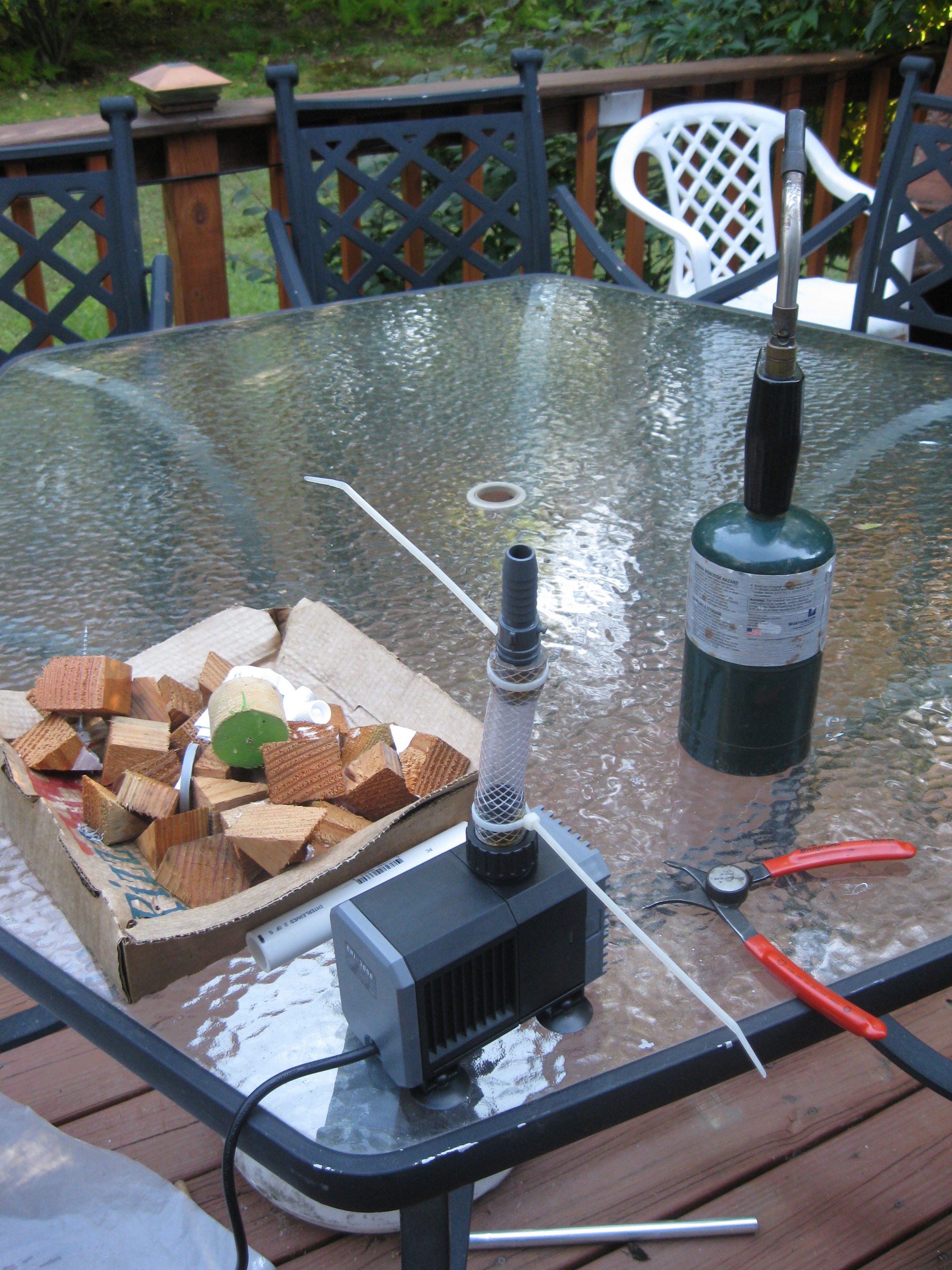 My hacked solution was so hacky in the end. I had a lot of fittings and parts left over from my past adventures in hydroponics as well as early inceptions of this project. I was able to find a threaded 3/4" barbed fitting and a fitting to adapt it to 3/4" PVC! Now the problem was how to connect this to the existing manifold, given that the pump input to the manifold had threads for a 1/2" thread for bolting on the flow meter in. This setup wouldn't work so I decided to cut it and attempt to salvage the fitting on end of the input manifold.

New 3/4" pipe/fitting adapter to connect the new pump to the manifold. The bit of pipe left in the right angle fitting on the input of the manifold had to be removed to fit this new pipe section into it, uniting the manifold and the pump. So to start things off I cut off the fitting with the 1/2" threading. My attempt to remove the bit of pipe inside the right angle fitting consisted of clamping the excess pipe proturding from the fitting in a vice in hoping to forcefully tear the pipe from the sides of the inside of the fitting. The vice trick worked to an extent providing me with cracks between the bit of pipe inside and the fitting. The next step was to fill these cracks and the inside of the pipe piece stuck in the fitting with PVC cement. I don't know how popular this method is but I thought I'd give it a shot. After the PVC pipe piece inside the fitting soaks in the cement it can be torn from the fitting using pliers and a screwdriver to pry. Another view of the process: In the end after applying cement and trying to pull it apart over and over again I decided that this just wasn't going to work as well as I thought, so I came up with a new solution. I decided to cut off the right angle fitting entirely and to drill a new hole in the reservoir to move the pump closer as to line it up with the new position of the manifolds input. In the end I needed a longer piece of pipe for connecting the pump, the piece and fitting in the picture above were just a mockup.

Longer piece with fitting ready to be glued to the manifold. Next off I shortened the drain pipes for each row, I felt the water level was too high during the original test, and the goal of NFT is to cut down on water. I took the drains down from 4 inches down to 3.5 inches. I just cut the pipe with a mitre saw, since its fast and easy. Next off now that the modifications to the input manifold had been made I glued in the new part and got ready to setup the whole system for another circulation test with the new pump.

System all setup, input valves all closed, don't worry I closed the drain valve before firing up the pump! 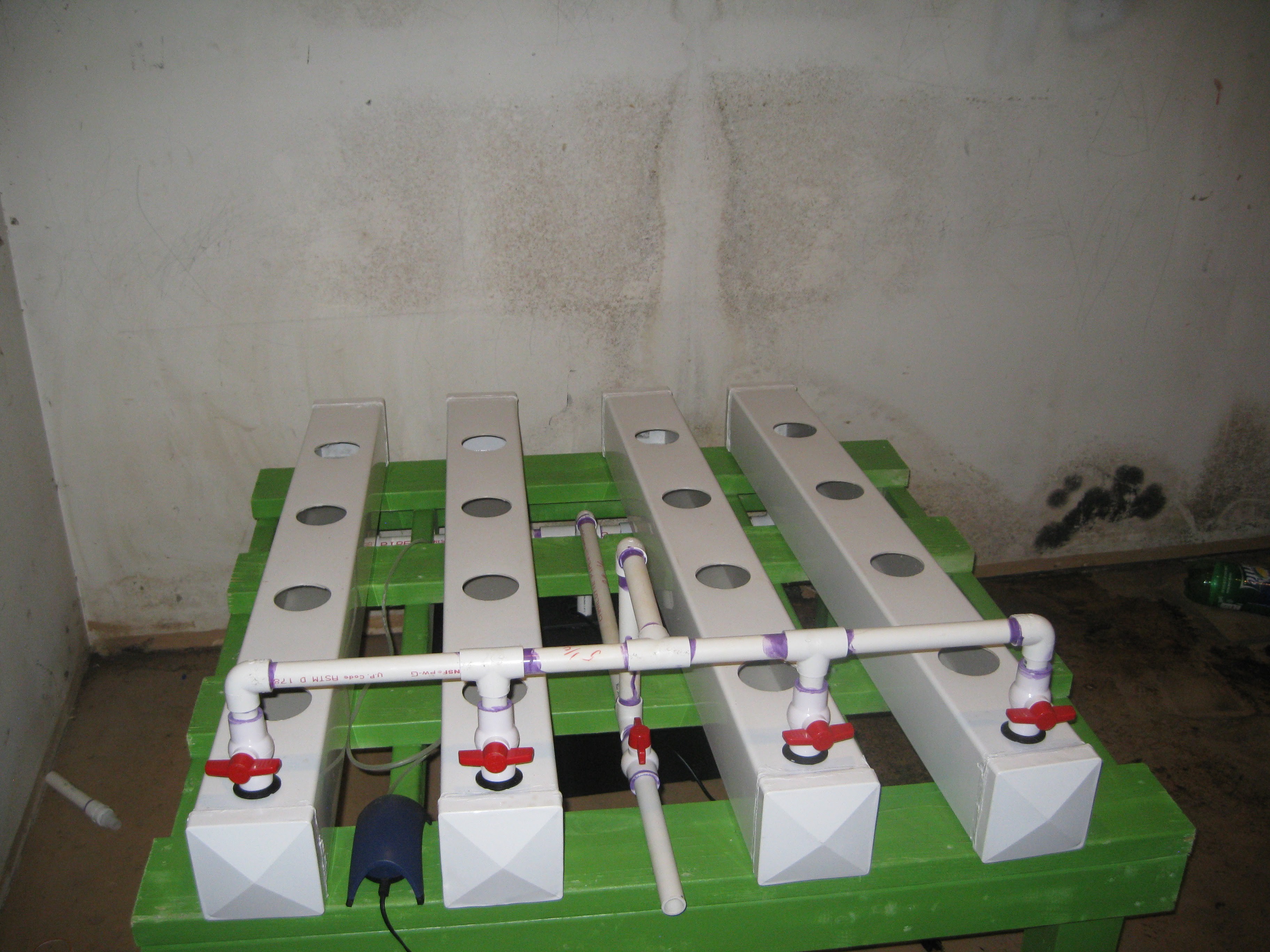 Next I ran the tubing for the airstones into the original hole I had them going through. This time though the pump power cord comes out its own whole where the input manifold goes through to connect to the pipe. So what I thought was a flaw in the design turned out to be fine, I thought it was going to be hard to line up and hook the barbed fitting on the end of manifold into the pump through the hole but it ended up being really easy, the 3/4" tubing was just as hard/soft as needed! 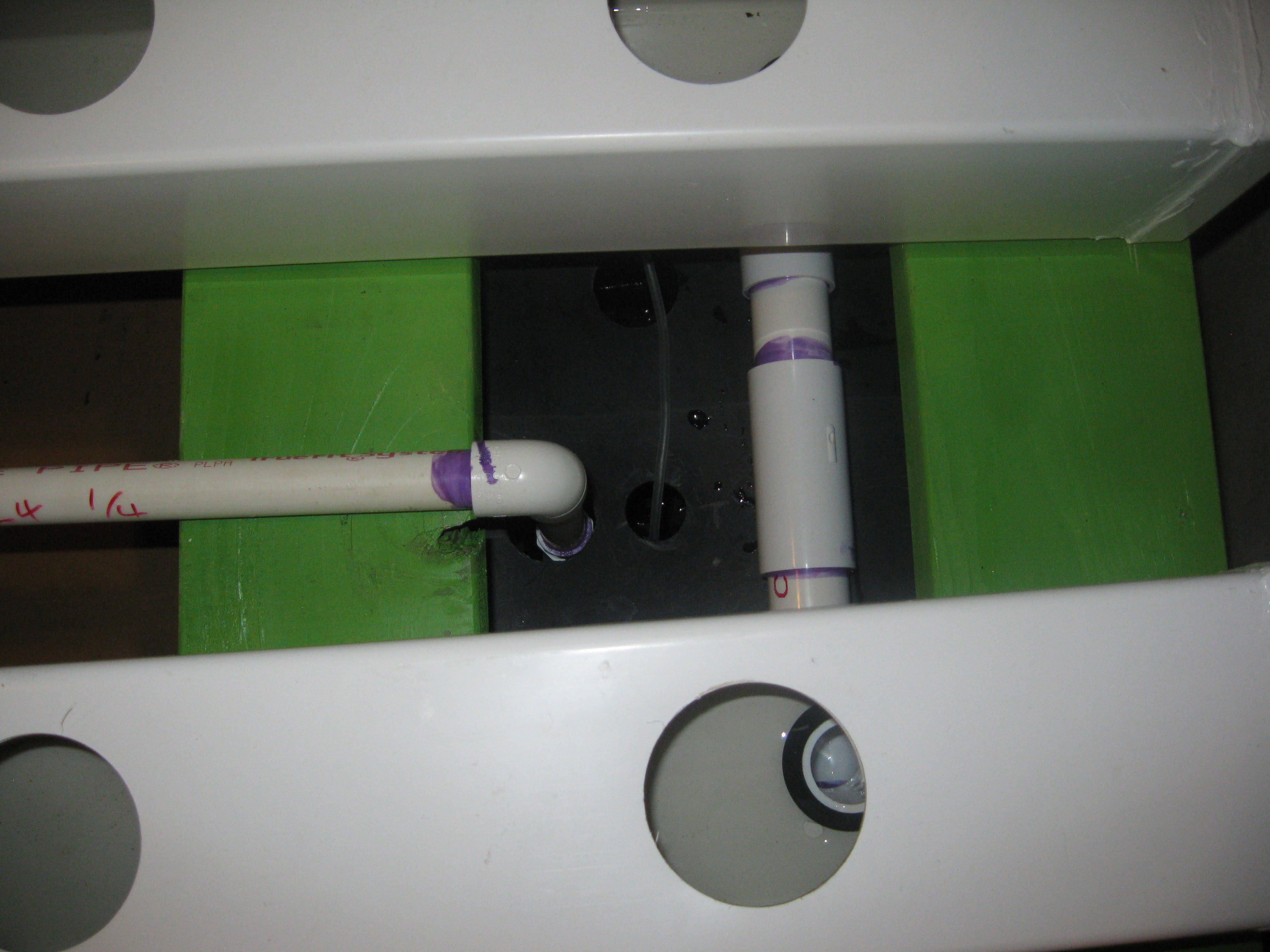 For the circulation test I poured in water using 3 liter soda bottles into the final grow site at an angle to pour almost directly into the drain manifold. I had to put in about 6 of these bottles to get enough water in for the pump to be submerged. Once I got the water in I set it up to turn on the pump. Like before I closed all the valves but one row and opened them one after another successively after turning the pump on. I had to play with the valves and fine a middle ground between fully open and fully closed to get each row pumping in at the same rate. Eventually motors and sensors will do this autonomously. After getting the water circulating in the system at the same rate through each row I added some MaxiGro nutrients and let them dissolve via the water circulating. The idea is to use the same nutrients for the first few days in this system so that the plants don't get stressed out from being transplanted. So anyways expect another update very soon, stay tuned!!!!

Plants are Getting Too Big: Transplant Time!