Erica’s original system was based around the TLC5940 LED driver chip which was controlled directly by one of the raspberry pis in Erica with an ATtiny45 on the pi daughter board to provide the clock signals. For anyone who saw Erica in person you will have noted that the LEDs were not always working. Although we haven’t been able to work out the exact cause of the issue we believe it may be due to the chips either overheating (ambient temperatures inside Erica got up to 58C when in the Marlands), or due to large voltages being inducted onto the signal wires linking the drivers.

To resolve these issues we have created a new LED controller design for Erica. The following are the major improvements over the previous version:

Below you can see the new controller design being tested. The controller itself is on the white breadboard, the blue breadboard is the transmitter that will put on the mech pi daughter-board. The cat5 cable connecting the two boards for this test is over 30m long so it shouldn’t have any trouble with the distances inside Erica 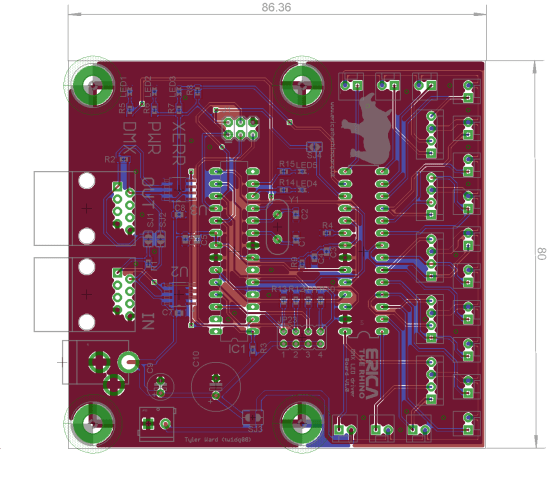