My mechanical sea glob will make you jelly.

About a year ago I started building a robotic jellyfish inspired by Festo's submergible AquaJelly. I was just beginning to figure out how to get the thing moving when I got sidetracked with the prospect of launching a Kickstarter campaign and dropped the project cold. During this whole long year while I've been fulfilling the said Kickstarter, this poor jelly prototype ("Boney") has watched silently from a distant shelf in the workroom, begging me to pick it up again. Finally this weekend I was able to spend some time giving the old parts a makeover… in yellow.

I added a nice gentle curve to the moving pieces, taking after the design of its cousins, the delta robots : 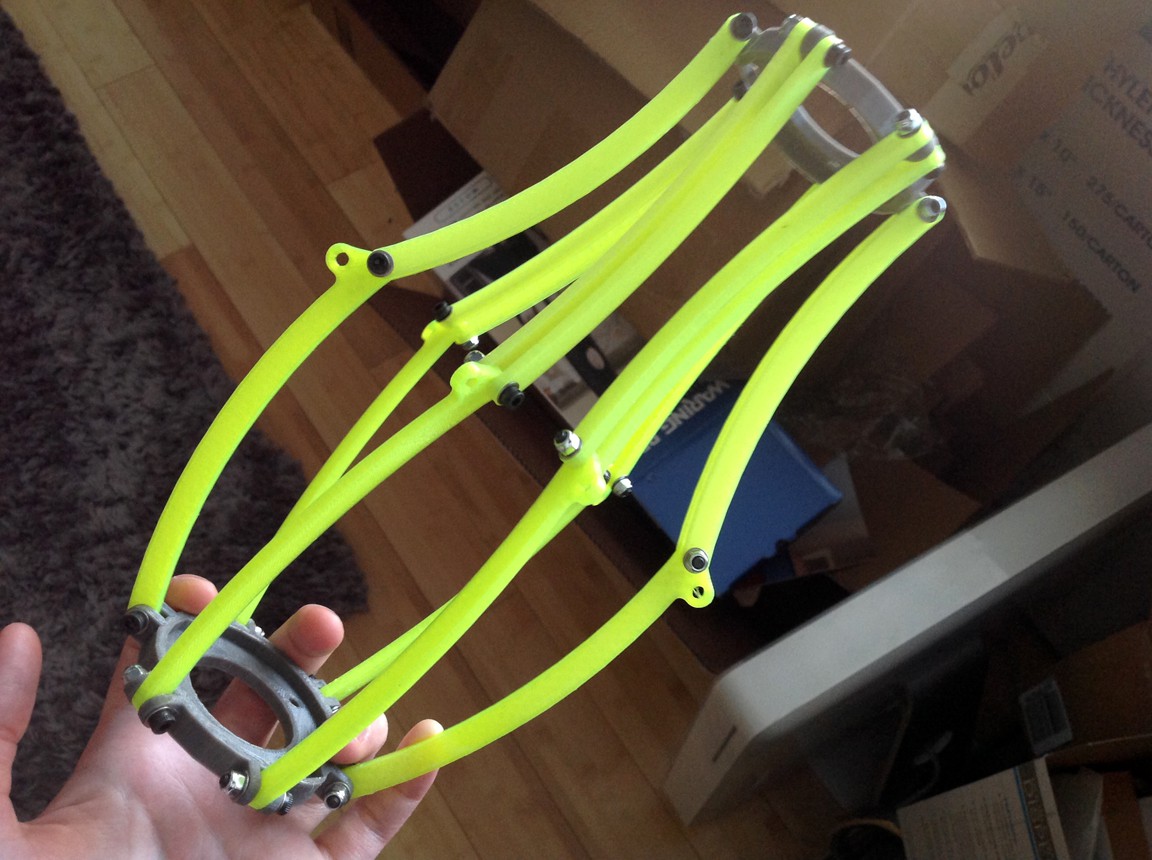 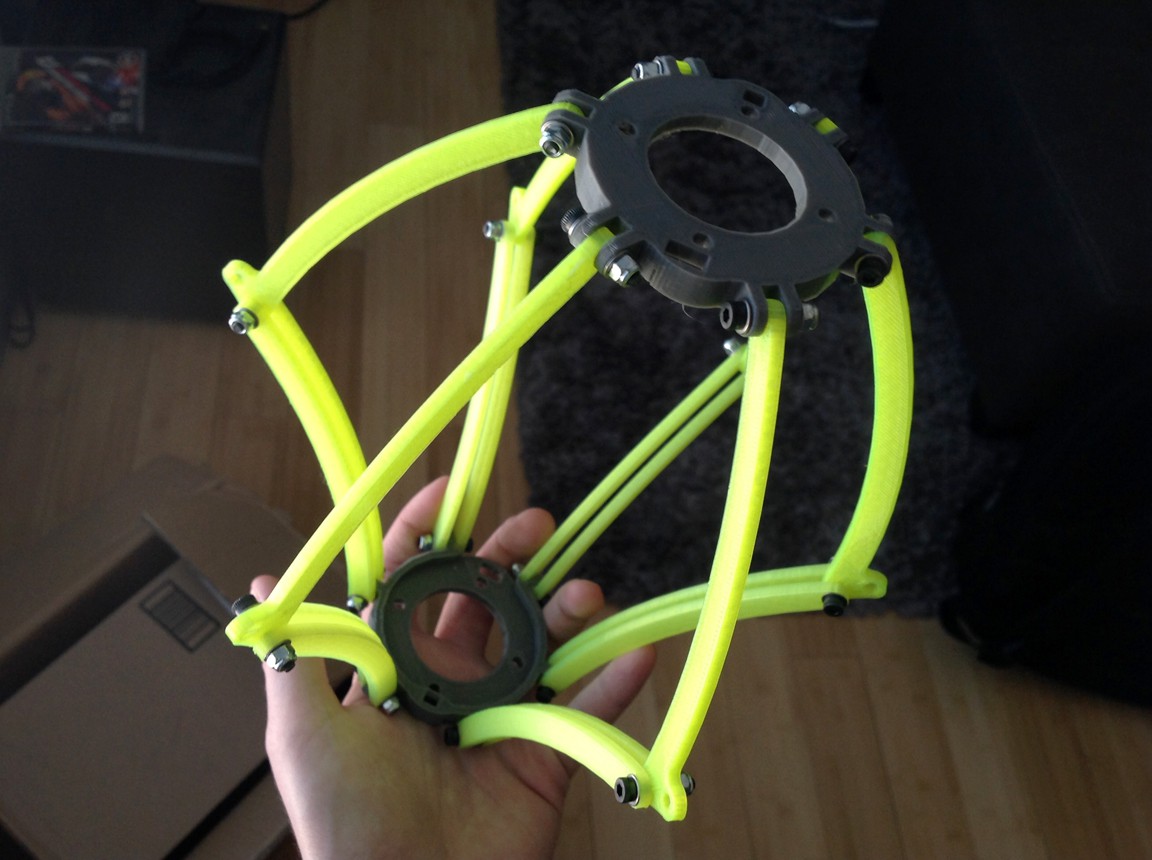 Last year I decided to use a rack and pinion to get the parts to move in leu of Festo's fancy linear actuator that they showcase in their model. Never having used, let alone designed a working rack and pinion before, this took some fussing about to get just right. The two servo motors I chose to drive the jelly's motion are attached to a fixed central core of steel rods which two separate radial disks glide up down upon. All of the jelly's flowing arms will be attached to the elbow of the mechanical arms, and as the disks these arms are attached to move back and forth, towards and away from each other, a sort of circular pumping motion is made. 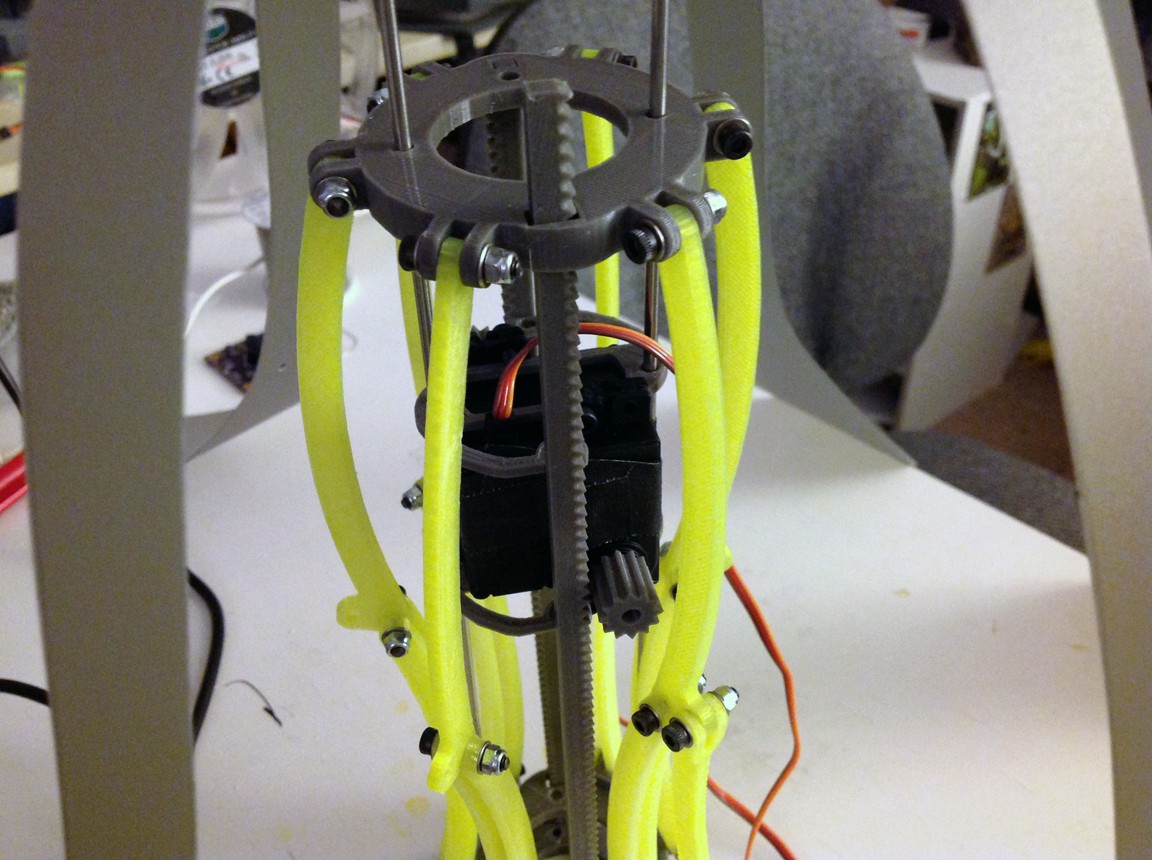 The two rack and pinion sets are in place now, each on opposite sides from one another moving different pieces in opposite directions. The rack passes through a slot in the opposing central disk, allowing it a deeper breadth of motion as well as keeping it in place. The only thing I seem to be missing at this point is a tensioner to press the rack against the gear on the driveshaft of the motor, so I have plans to whip one up later tonight.

On my old prototype, I used plain long strips of sheet ABS as stand ins for the jelly's long flowing arms. They worked more or less, but weren't very nice to look at : 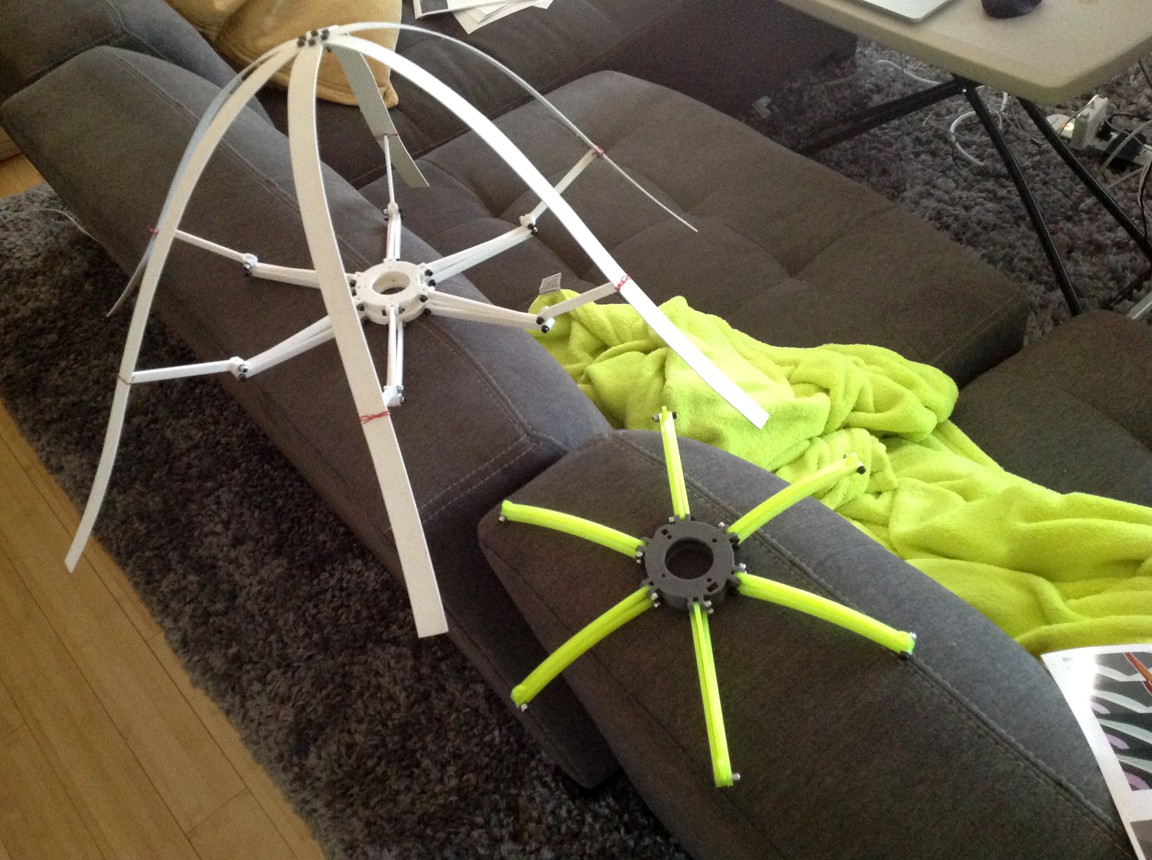 For this rendition of the bot, Mark offered me some of his old shelf liners from the garage to use. These happened to be an awesome semitransparent gray that matches the printed parts of the jelly perfectly! I decided on an elongated spade shape for the tendrils this time : 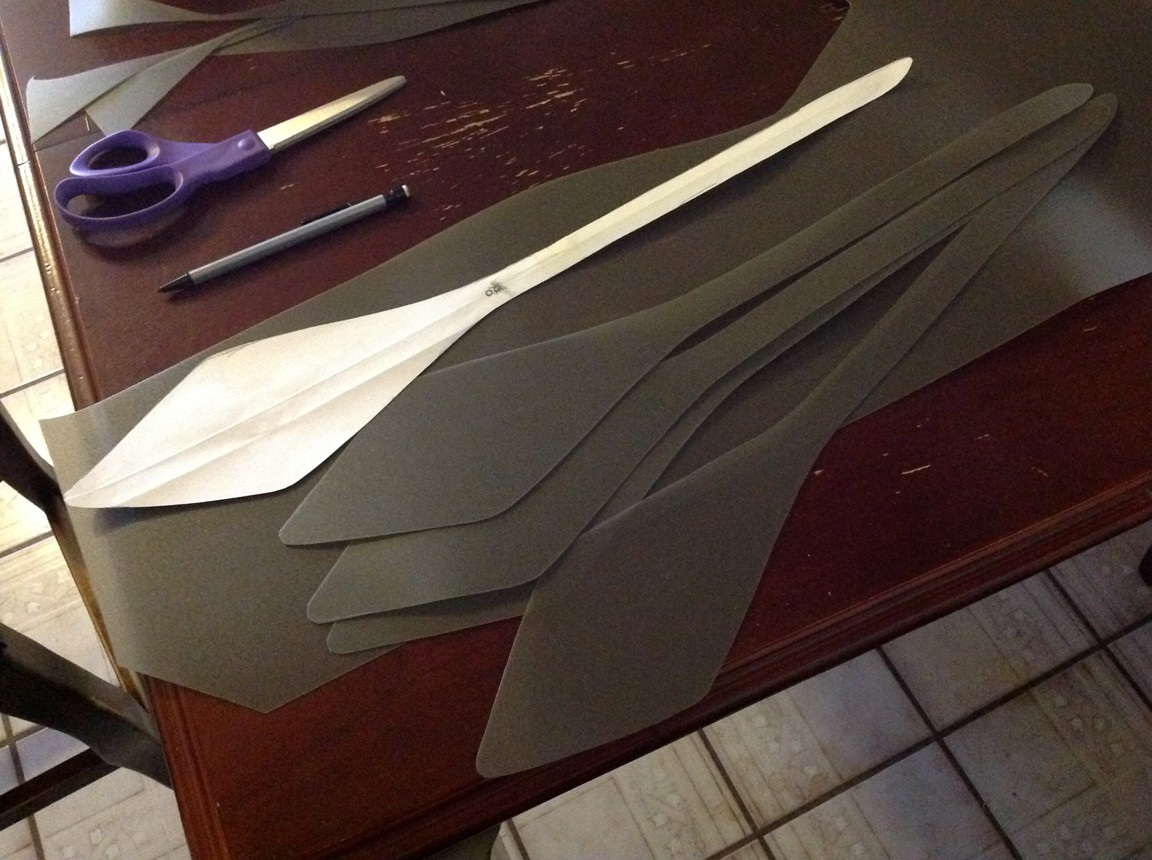 These pieces connect at one end to a small ring, creating the umbrella of the jelly : 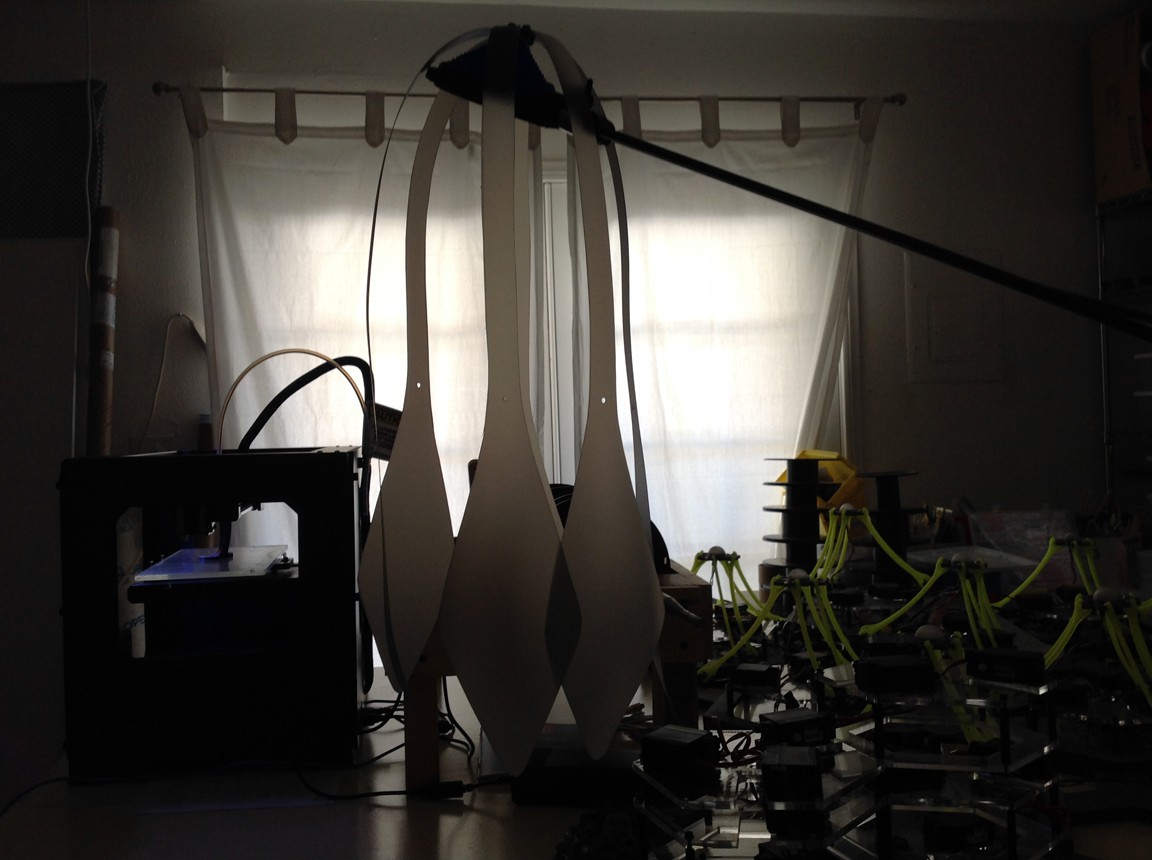 The center of the umbrella mounts to the top portion of the drive shaft with a fancy pants shape sandwiching it in place like so : 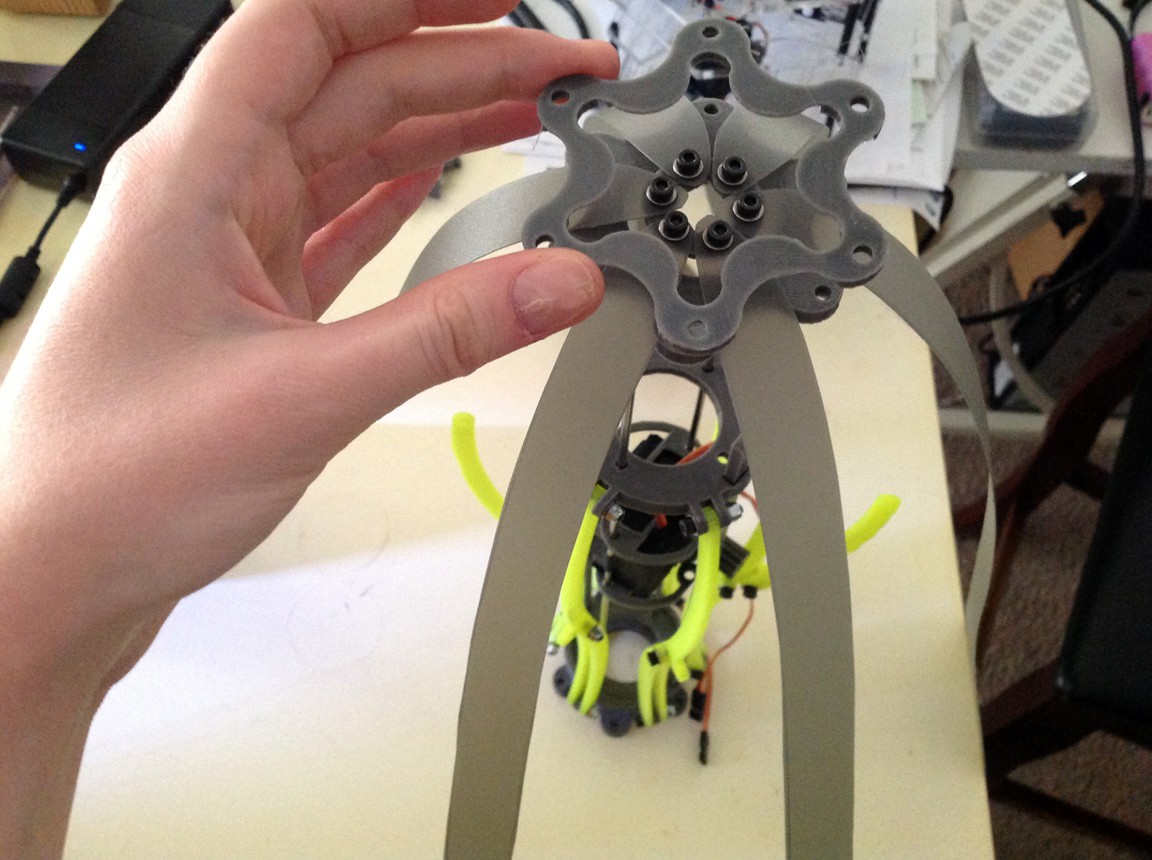 Once I design my tensioner for the rack and pinion and finish printing and attaching the rest of the jelly's small arms (all of this depending on whether or not my printer stops being a butt) I can then start working on some test code to get the thing moving! I have no idea really if my design will work at all… I'll just have to wait and see. For now though, it's getting acquainted with all of its brothers and sisters in the war room. =] 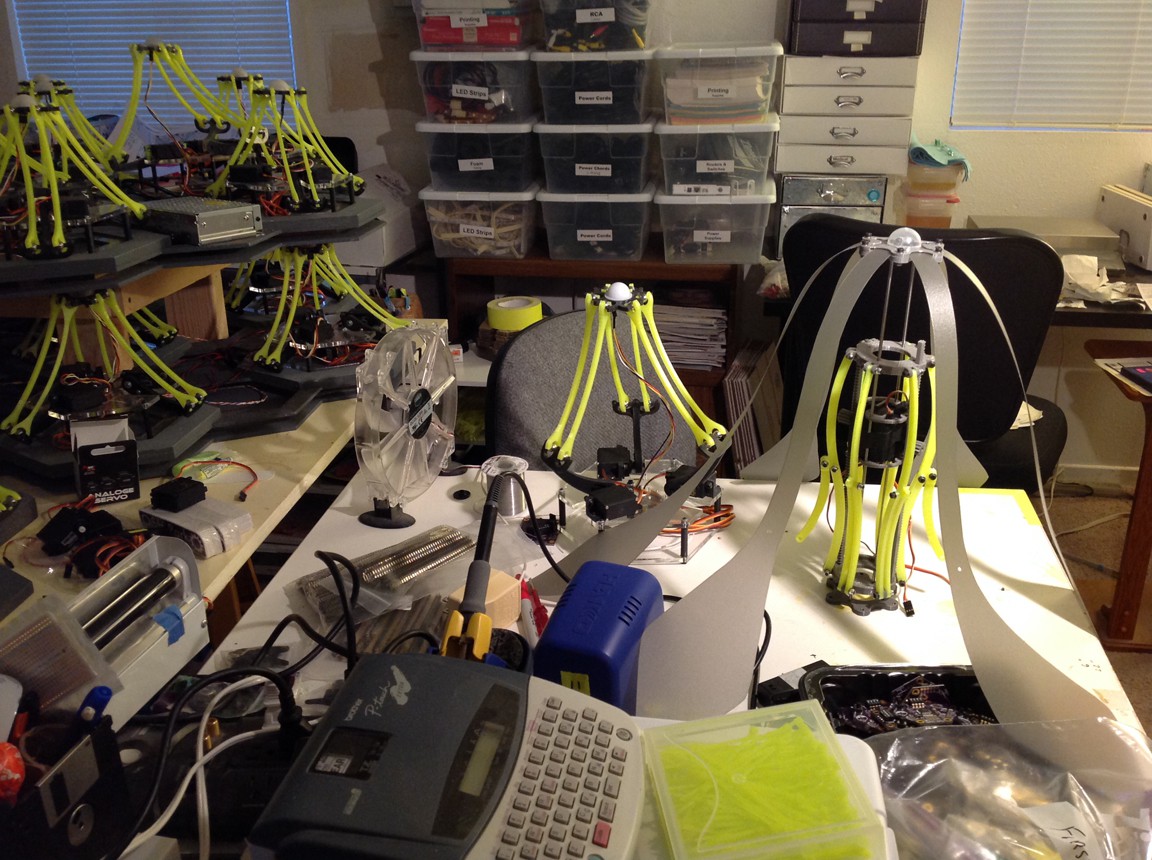 My next post will likely be about whether or not I succeeded mechanically in getting the jelly to do what its supposed to. Cheers!

All in One Piece