Last time I briefly wrote about the upgrades to the sensors and firmware. Today I'm writing about the newly redesigned hardware that's almost ready to be sent to the fab.

The previous version of the hardware had the logic board inside the plastic casing. It was fine for the simple analog sensor, but with the switch to the more complex digital sensors, it became too much to handle. This, in addition to all the "accessory" boards, made hardware design difficult in general.

Eventually, I had to make a decision to scrap my current design and re-design the entire logic assembly. After long hours of re-thinking and re-designing, I was able to condense 5 PCBs into a single one. 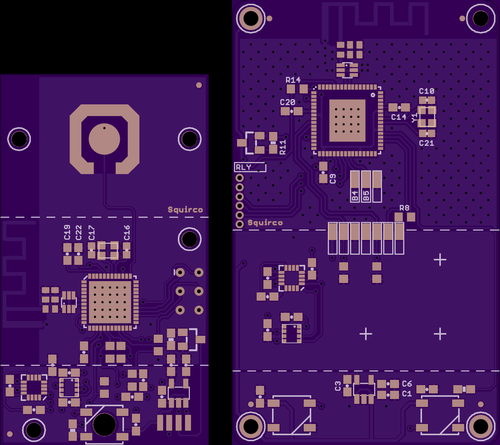 The new board is 30% smaller, and uses board space much better than its predecessor. Instead of fitting inside the case, the new board fits inside the button. This means that the ICs and sensors have more airflow around them, the ambient light sensor sits flush with the button without an adaptor board. Most importantly, the antenna is brought outside the wall, which is much better.

The area containing the main MCU is sized to fit several wireless modules, in anticipation of switching to the ESP32 sometime next year (assuming the ESP32 does what I think it does).

I'm going to send these to the fab sometime within a few weeks. Assuming everything works, I will be giving away some of the leftover boards to people who are interested in this little project.