A case mod and auxiliary cooling system for my gaming computer based on scrap parts.

My initial design premise has the fan mounted on the outside of the case (which does not have enough space inside to mount something this large), with some basic control circuitry mounted in a box (also attached to the side of the case).

To mount the fan to the case, I'm going to cut the flanges off the fan's original mounting plate, drill holes in the corners, and bolt that to the side of the case, with the fan blowing inwards (to generate positive pressure inside).

The datasheet for the fan lists it as being able to push 166 CFM (which is more than the entire remainder of my cooling setup), but with the caveat that it generates 50 dBa while doing so (and I live in an environment with extremely noise-intolerant people). While using a potentiometer to throttle it is the most logical option, potentiometers capable of generating sufficient resistance on mains AC voltage without exploding are rather on the wrong side of expensive. Toggle switches, on the other hand, are cheap (and look really cool), and I already have a relay that I can use to switch the fan on and off (also salvaged from the centrifuge). I figure that I'll only need to turn this on when I'm REALLY pushing the CPU, so throttling it isn't really necessary. 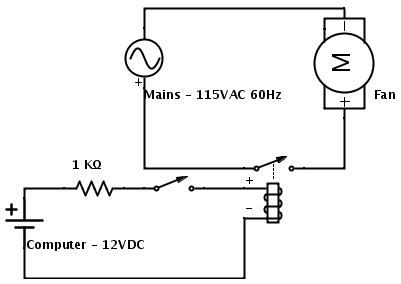 To ensure the fan can only run when the computer is on, the switch side of the circuit will pull its power from the computer's power supply (either the motherboard fan headers or one of the 4-pin molexes on the PSU). The diagram shows the basic design of the circuitry (there really isn't much to it).