building a (budget) box I'd be happy to open

Recently I'd gotten a fair bit of interest from folks wanting to buy or or trade for one of these FPGA boards...And I must admit, I'm not terribly capitalistic when it comes to stuff I build outside of the work context (I often find I just end up giving stuff away, rather than trying to profit on them).  Still, I feel that generally everything I build is a reflection / measure of me and my interests and passions and enthusiasm and as a result, I hate to "ship" junk.  And I hate to own junk!  Better put: I want things to look pro, even if they're outside of the professional context (things move slower, but they just tend to be more 'agreeable' all-round).

So when it came time to come up with boxes to ship to folks, I thought I'd spend a little time trying to get this right.  And though I began by getting it wrong - all wrong - I managed to recover nicely I think and these express the 'spirit' of this board in a way that makes me comfortable sending it to my mates / others I've come to know thru electronics / n'er-do-well hackers, what-not.

So the first order of boxes arrived an candidly, they sucked.  Corrugated die cut, white on one side, natural on the other.  The white is faded, poorly applied, the folds are not crisp and clean, the slots look to have been cut far to large for the flap thickness (makes the boxes loose along the edges) and the overall accuracy is rubbish.  I'm embarrassed for the USA stamp they bothered to apply to a crap box.   You can see the thin paper over the corrugation making them weak and hard to managed without some serious tape / glue.  Have a look: 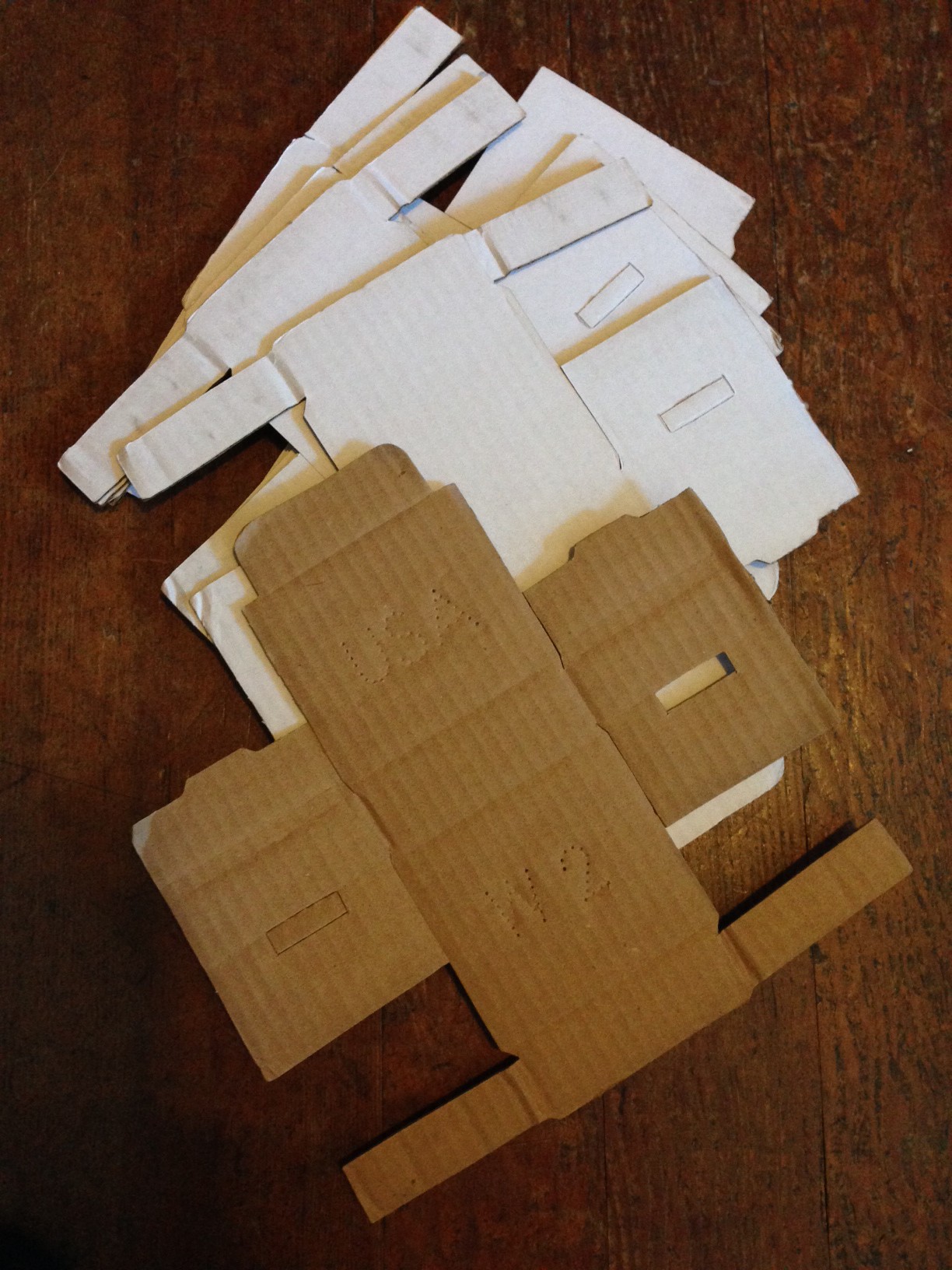 **Still, I tried to "make-do" (if I find myself using this expression, it is undoubtedly a reflection of frustration and poor judgement more than anything else) 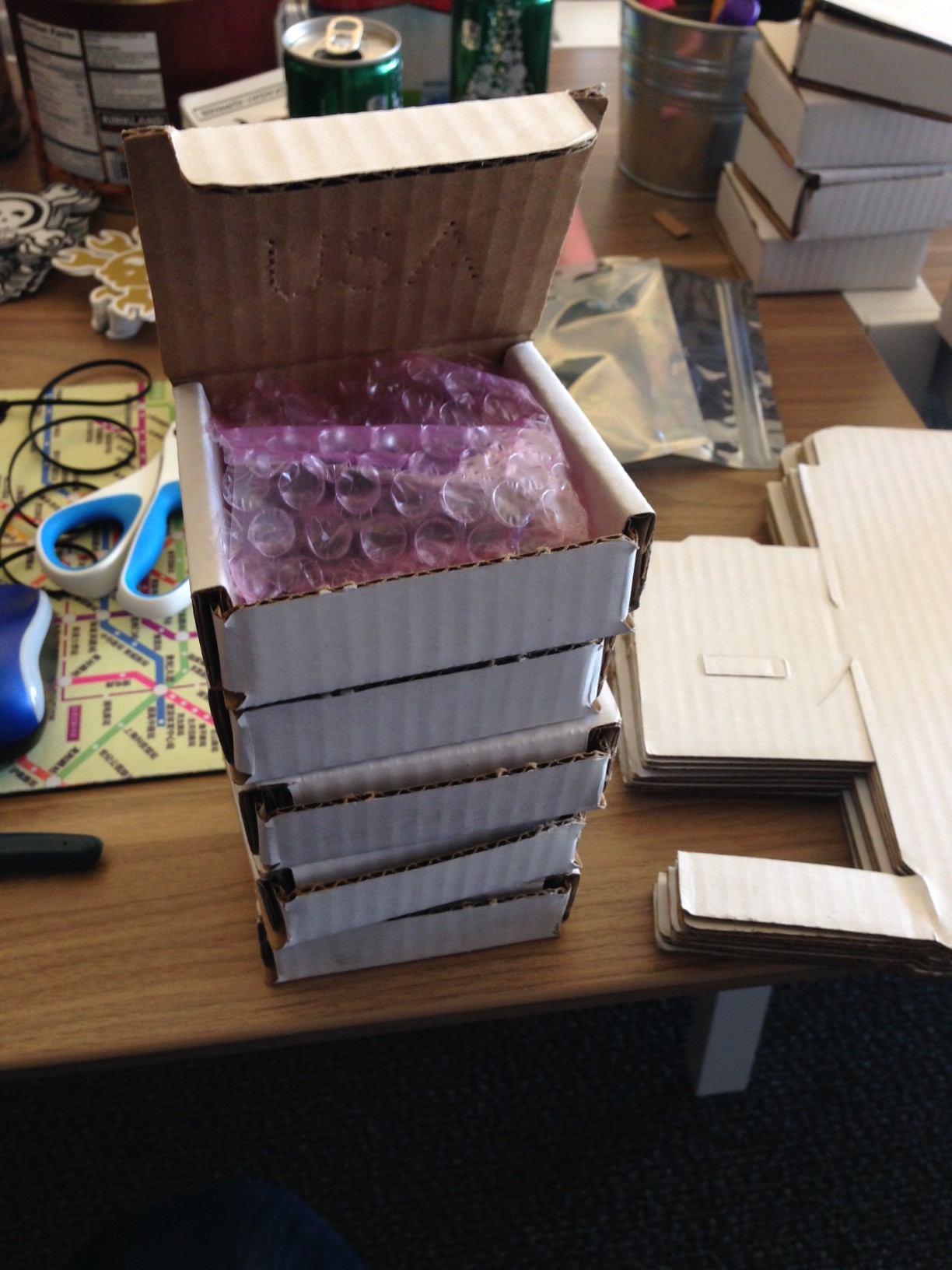 ***Ok, complete rubbish.  I will NOT send this off to a friend.  It's totally unacceptable (I'm that guy that puts stickers in a box along with your xmas present...details!).  So I packed it in and I pinged my good friends at Uline.  They are pro.  They do boxes.  All sorts of boxes.  And they do them well.

What I got was a far superior product.  Well cut, sturdy,  and although slightly larger (4x4" vs 3x3") there is clearly a far better process afoot here than at the first place I used.  Still die cut but looks to been done with better materials, better equipment, and the sort of love I like to see. Have a look: 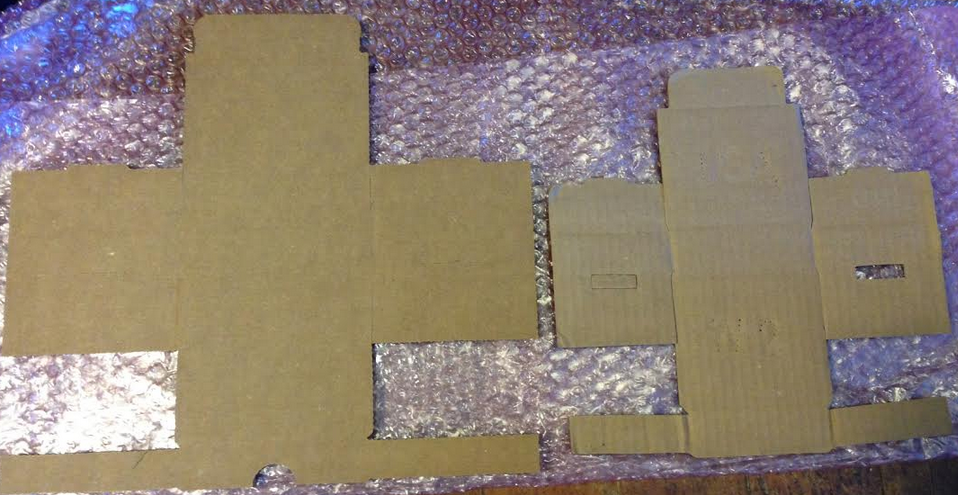 ***Now that I had a better box, I still didn't have an awesome one.  I had something nice, solid, more precise, but I wanted awesomeness.  Maybe not apple's barely-air-gets-through precision (impossible to do in my house on a budget) but something that at least looked cool and that I might keep after I took the board out and use for knickknacks like jumpers or those extra header bits or such.  Nice to pack away that arduino or flying leads and have some room for the USB cable and what-not.

So I go my thinking cap on and thought to use the Hackaday logo on the outside of the box.

First I tried some die-cut stickers... 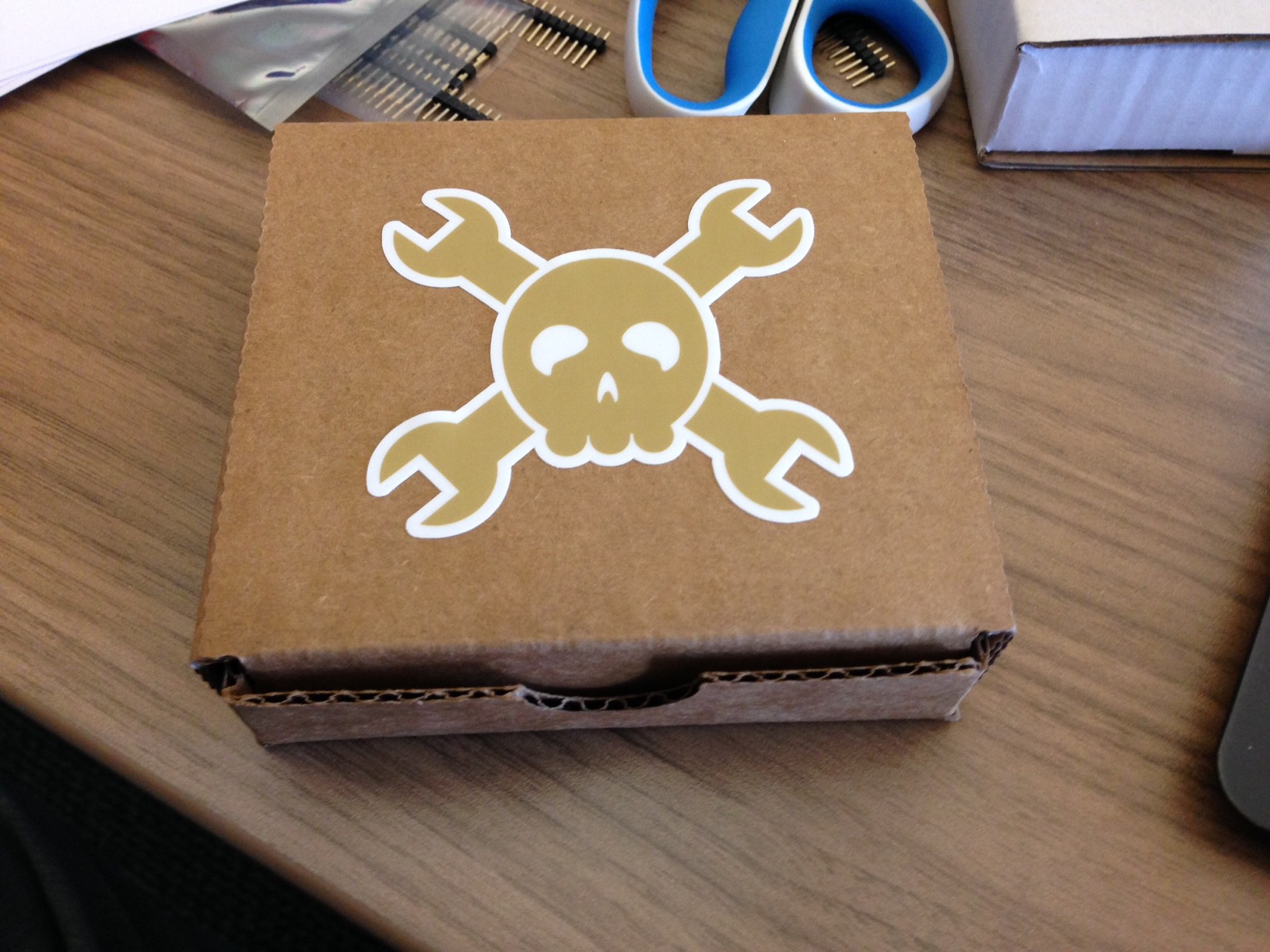 Nah, fail.  Nice and all, but too much contrast, not enough of a story in there.

This is a board for people who want to build whacky shit with FPGAs and it should reflect that.  I couldn't have a clean edge, precision cut sticker on the box.  (Inside maybe)  I needed something that also complemented the rough edges of the imperfect box.  So I just happened to be sitting in my office and inspired by a pic of graffiti that serves as my desktop background, I decided to use spraypaint.

(Think: sweet road crew awesomness...what better to have in your gearbag than an FPGA board?)

...But with what image?  Why the Hackaday logo of course!  (thank you to the die cut sticker that served as my cheap stencil) 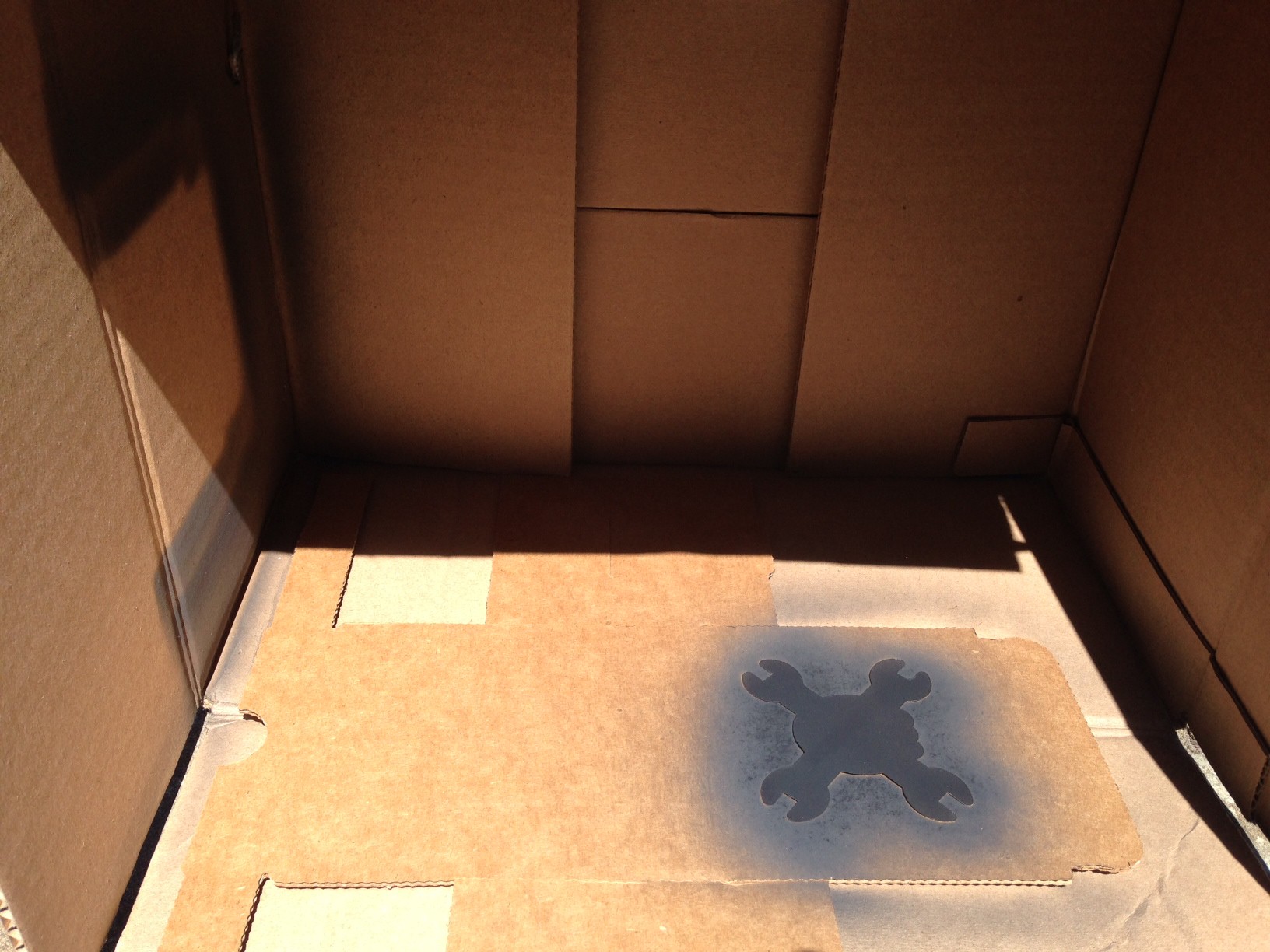 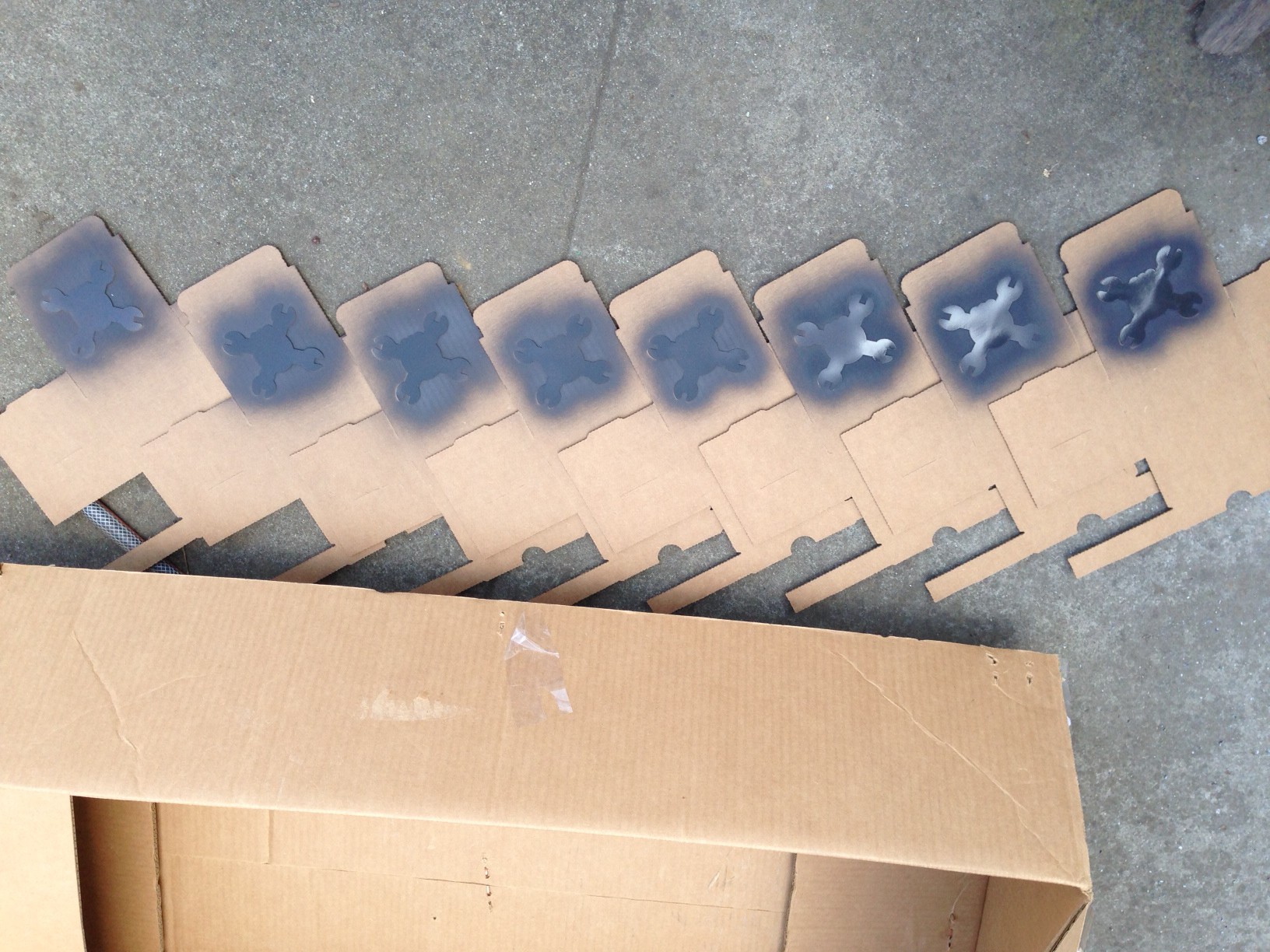 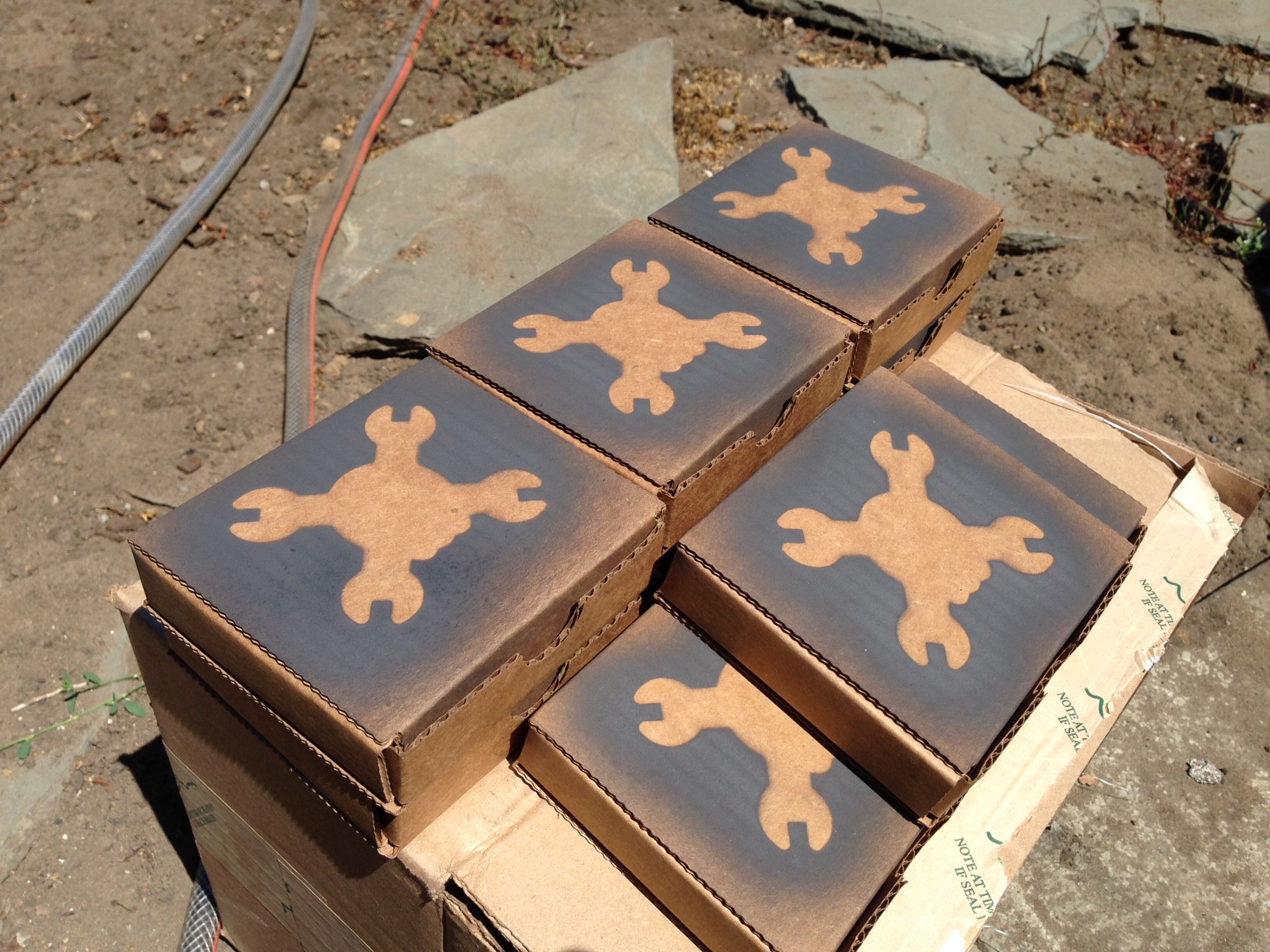 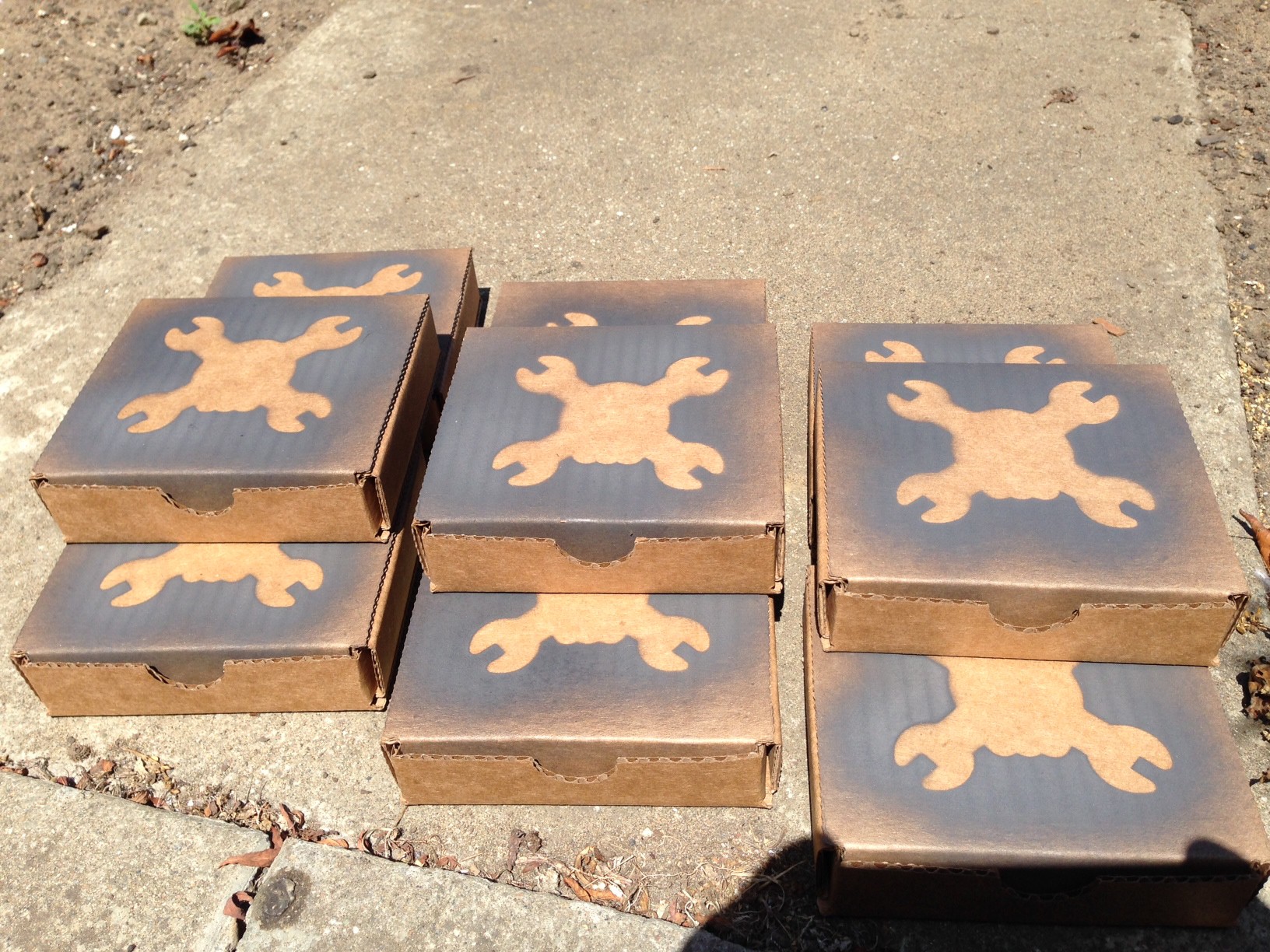 Altogether I'm pretty pleased with the outcome.  It's not perfect perhaps but I think it's a cool complement to the awesome black solder-masked FPGA goodness inside of the box.  This is the sort of thing I would hope someone would think twice about dumping in the recycling bin, and may even use to send something awesome someone else.