I've been using my hacked-together boards for a couple months now. They work great, considering how much effort and money I've put into them (ie. barely any).

In those last few months, though, I've been tooling around a little with designs.

I have ten of these cheap-and-easy prototyping boards, now it's time to refine it into an actual decent product.

Nothing has been polished or even completed yet, I'm just showing WIP stuff as it happens.

Here's what I did a few months ago: 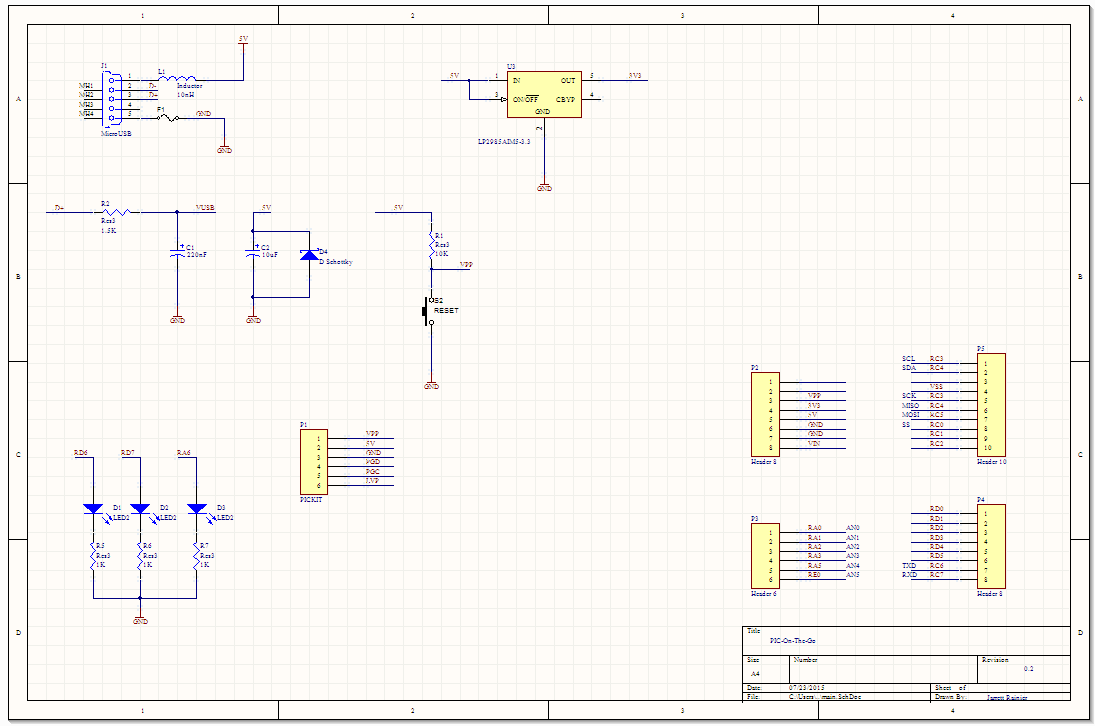 Main file has been cut down. The buck converter is a lot of work and BOM cost for a very small amount of pay-off. The part that I was using is also end-of-life now, so I'm replacing it with a linear regulator for this revisions.

A lot more stuff is being put on this board, so the bonus header is gone. Some of the useless Arduino pins might be taken off, too. The PIC has been moved to another sheet.

That switch is getting changed to a SMD version. Again, moving away from quick-to-throw-together and into manufacturability

USB will also be added.

I'd post the other two sheets I have, but they're mostly just a bunch of micros and not a lot of supporting circuitry just yet. I'm adding a smaller PIC to the same footprint as the original. Then you can drop in either a big 40 pin wide footprint, or a more typical thin 28-pin package. Most 8-bit PICs have a similar footprint.

The big change is that I'm adding USB programming to the board. One of my side-projects lately has been a PicKit 2 clone (here (spoiler alert: it's awesome)), so including it is not a huge timesink or anything.

The BOM cost on that is ~$15 for programming bits alone, so I'll be investigating some alternatives. Part of that problem is that the PicKit 2 uses the $6 PIC18F2550, and I don't believe they have open-sourced the code. There are a lot of extra features in there that I don't use, so dropping in a cheaper PIC and lightening up the code-base would be great.

This project on GitHub is an open-source programmer, so I might try and adapt it, or take lessons from it and write my own. How hard can it be? ;)

Due to the Microchip Curiosity board, I have a new word in my vocabulary, PicKit-On-Board (PKOB), which might help me with my research. A quick look didn't turn up how they did it, but maybe there are some schematics hidden away somewhere, or maybe high res photos of the circuit might provide some clues :)

An analysis of the Arduino schematics

Microchip has done the PKOB before, here:

For this one they've used a PIC24FJ256GB106, which makes even less sense. It's $9 and doesn't have the high voltage circuitry, although it looks like they only have to support programming the one chip.