I can paint with all the colors of the wind, and a spray can.

With the mechanic portion of the bike project nearing it's end, and the electrical part under way I decided that there was no better time than the preset to start painting. As it turns out painting is a quick and easy process, but prep work and curing times are time eaters.

The gas tank and front fairing were pretty beat up, so I took extra time to bondo and repair these before painting. Sadly I was lax with picture taking during this part as my hands were covered with glue and bondo.

I initially started painting in the basement of my apartment, but my roommates weren't thrilled with the paint smell, so I had to move operations to the makerspace. Now while I love the makerspace, in the winter it sucks for painting. Since it's a large industrial space, and we don't have a Scrooge McDuck vault of gold, we keep the space heated but not warm, which is OK for equipment, but not for evaporative chemical processes like spray-painting. To side step this issue I painted the parts at the space with the heaters on at 65, let them sit overnight in the in ambient (45F) temp and then gently moved the parts back to my basement. This way they can cure in the 70F temp of my basement but they're mostly done off-gassing and creating unpleasant smells.

So I hung the parts up in the back end of the makerspace and went to town. Thanks to a happy accident and some research I found a paint texture that I fell in love with. When I was painting the first two pieces I accidentally stood to far away from the piece that was being painted. Rather than getting a lovely smooth finish I got a slightly bumpy finish sometimes refereed to as orange peeling. But unlike normal orange peeling this effect was controllable and repeatable, and consisted of a very tight nit closely grouped texture that I can best describe as the slight texturing you see on consumer electronics. It also had a sort of semi-gloss effect, looking slightly flat from a direct angle but shinning from an indirect angle. Comparing two of the pieces that I painted, one that came out buttery smooth and shinny and this micro-textured finish, I loved the micro-texture, it made the fairings look like some sort of ceramic graphine-ish material. Sadly the camera doesn't do it justice. 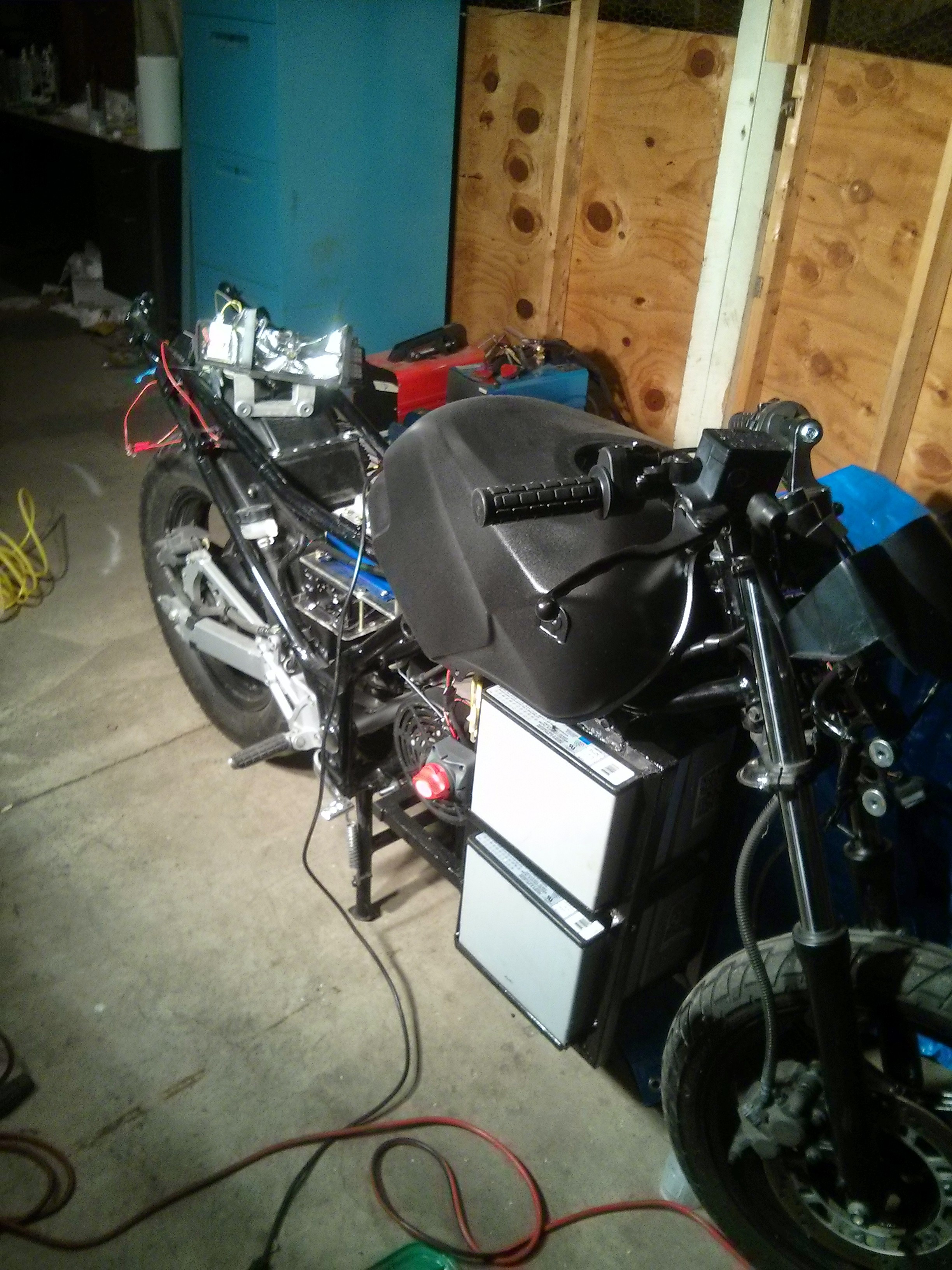 The trick was to stand about 2-3 feet away from the part you're painting and then paint like normal, lots of thing coats, give each one a couple minutes between coats, etc. So what was happening here? Why was the paint doing this? After some digging around online I think I found the answer. The paint was starting to dry on it's trip from the can to the surface, and as it was drying it was turning into a little semi-rigid ball. When the paint ball hit the surface it was keeping it's shape and sticking. So by painting in the method and using several thing color coats I was able to build up a textured surface pattern. Hit that surface with clear coat applied from a distance and BOOM!!! the effect was magnified twice over. As a friend described, "It looks like something Batman would make his gear look like. You're like Bruce Wayne on a budget, and with not dead parents" Parts hanging up and curing 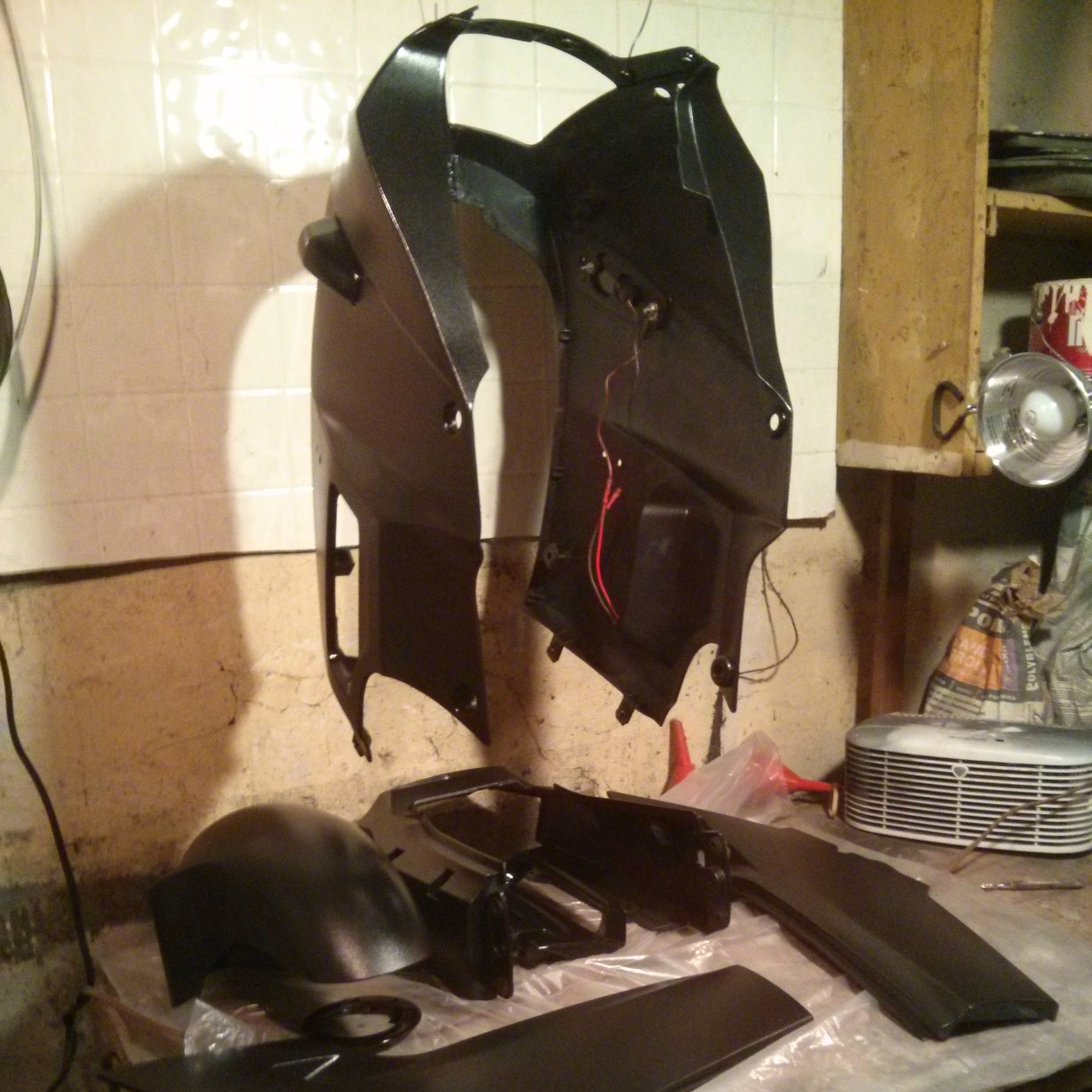 A note on curing. When you spray paint something the paint has chemical agents in it to help it dry these chemicals evaporate out of the paint while it's drying, this process usually takes a few hours and is colloquially refereed to as "dry to the touch". At this point the piece can we lightly handled without messing up the paint. But as you may have discovered, or if you're lucky you haven't, the paint isn't up to it's full strength. This is because the paint layers that aren't in direct contact with the air are still soft, think of it like brownies, you've got a harder outer layer surrounding a gooey inner layer, awesome for brownies, sucky for parts that need to be installed and handled. Now if you leave your brownies, or painted parts out, for several days (a week or two is ideal) then this gives the inner layers time to dry too, resulting in a painted surface that can take more abuse.

Ash to ashes, dust to dust