Using artificial intelligence to identify a disease by its symptoms

From Wikipedia, the free encyclopedia: A medical tricorder is a handheld portable scanning device to be used by consumers to self-diagnose medical conditions within seconds and take basic vital measurements. The word "tricorder" is an abbreviation of the device's full name, the "TRI-function reCORDER", referring to the device's primary functions; Sensing, Computing and Recording.

We will sense the 3 basic vital signs, which are body temperature, pulse rate and respiration rate. We will process (compute) these data using naive Bayes classifiers trained in a supervised learning setting for medical diagnosis beside other tools. And we will record the data (on a SD card).

The medical tricorder works in absence of internet, smart phones and computers, because where it probably will be used aren't such things available for the people in need.

2. Naive Bayes classifier at a glance

The data evidence is given by

where P(h|d) is the probability of hypothesis h after having seen the data d.

Generally we want the most probable hypothesis given training data. This is the maximum a posteriori hypothesis:

As the denominators P(d) are identical for all hypotheses, hMAP can be simplified:

If our data d has several attributes, the naïve Bayes assumption can be used. Attributes a that describe data instances are conditionally independent given the classification hypothesis:

This means only one of approx. 12500 patients with common cold/flu like symptoms has actually flu! Rests of the data are taken from here. The probability-look-up table for supervised learning looks then as follows:

Note: The probability that an event A is not occurring is given by

Multiplying a lot of probabilities, which are between 0 and 1 by definition, can result in floating-point underflow. Since

it is better to perform all computations by summing logs of probabilities rather than multiplying probabilities. The class with highest final un-normalized log probability score is still the most probable:

An according Arduino sketch using the serial monitor and computer keyboard as interface for testing would look as following:

Ok, let's start with an assumption. As we have to deal with relatively low temperatures, we neglect radiative heat transfer of the forehead and just considering heat transfer by convection. The heat transfer per unit surface through convection was first described by Newton and the relation is known as the Newton's Law of Cooling. The equation for convection can be expressed as:

A = heat transfer area of the skin[m²]

TS = temperature of the skin [K]

The equation for convection can be also expressed as

Dividing by surface area A:

which is an approximation of h/(p·c) with change in skin temperature for afebrile and febrile ranges.

The body core temperature will be monitored by a MLX90614 IR thermometer for non contact temperature measurements. Both the IR sensitive thermophile detector chip and the signal conditioning ASIC are integrated in the same TO-39 can. 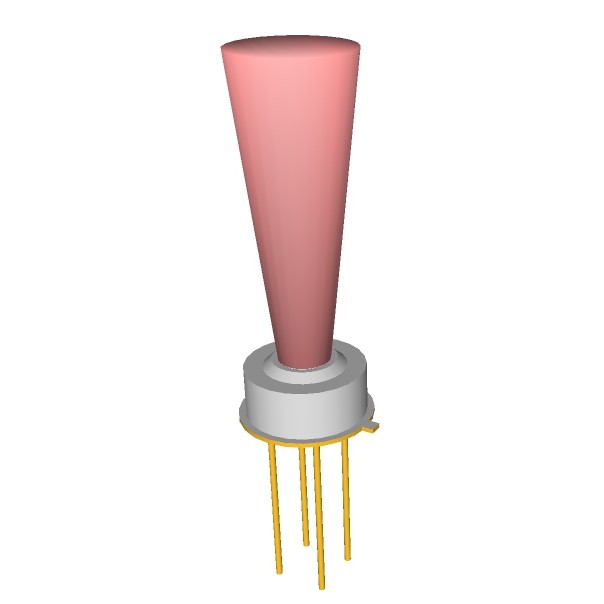 The schematic is straightforward, just following the data sheet: 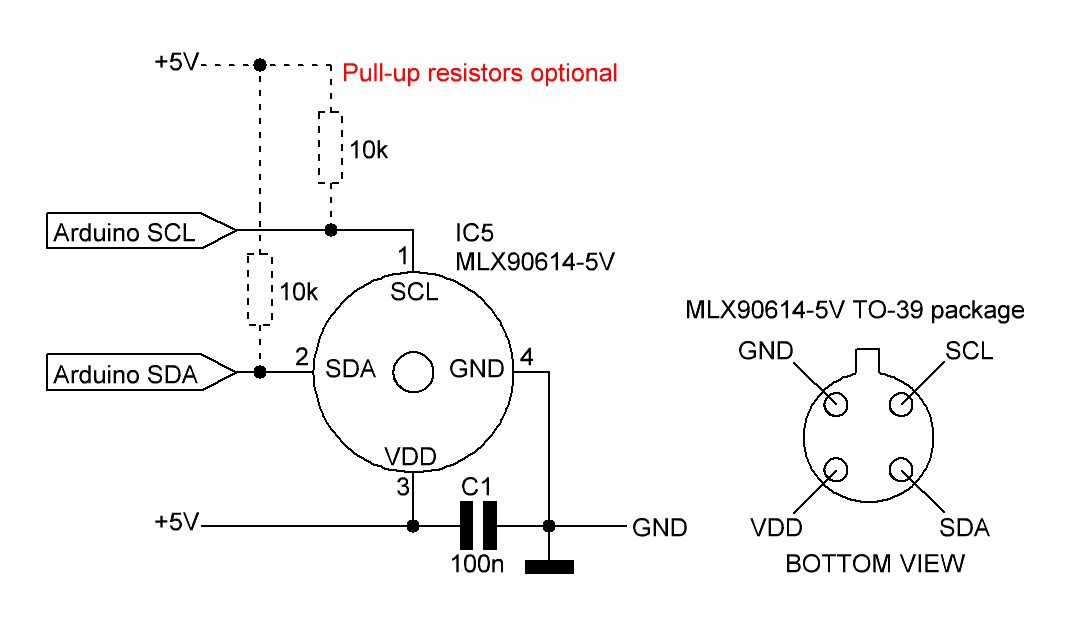 I will probably use the D - 3V medical accuracy version of the IR thermometer for the next mark of the shield. 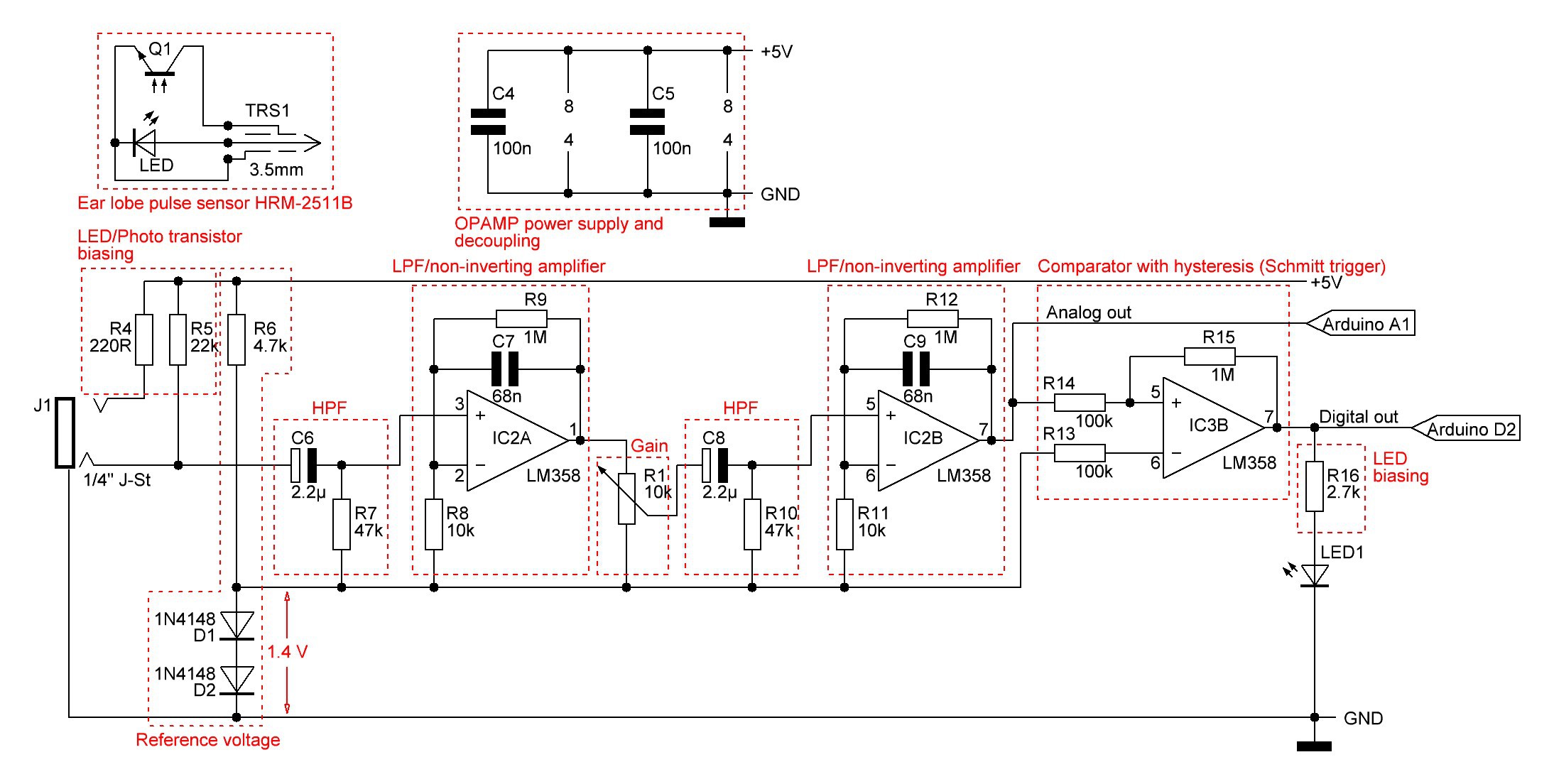 The ear lobe pulse sensor HRM-2511B is from Kyto Electronic. R1 and R2 biasing the IR LED and photo transistor in the ear lope sensor which is connected to the shield via 3.5mm phone connector. Safety resistor R6 and the diodes D1 and D2 building a reference voltage generator. The reference voltage is two times the diode forward voltage (approx. 0.7 V for silicon diodes, depending on current and temperature) in respect to GND. C6/R7 and C8/R10 building passive, analog, first-order high-pass filters (HPF). The cutoff frequency fc is given by

The combination of HPFs and LPFs helps to remove the unwanted DC signal and high frequency noise coming from the sensor and boost the weak puslatile AC component, which carries the required information.

The amplification of every of the two op-amp stages with negative feedback is set to 101:

Gain can be adjusted by the potentiometer R1, which is a voltage divider.

The analog signal on the output of the second opamp stage is passed to an analog pin of the Arduino for further signal processing and to a comparator with hysteresis (Schmitt trigger) that ignores high frequency noise in its threshold voltage. Noise below the threshold is ignored, and positive feedback latches the output state until the opposite threshold is exceeded.The output of the comparator is passed to an LED to indicate heart beats and to the Arduino digital pin 2, which provides for most boards a hardware interrupt.

Beside the heart rate evaluation a so called Poincare plot has been added on software side. A Poincare plot returns a map in which each result of measurement is plotted as a function of the previous one. More formally, let

denote the data, then the return map will be a plot of the points

In our case the data are the elapsed times between two following heart beats. The shape of the Poincare plot can be used to visualize the heart rate variability (HRV). In this paper Poincare plots of healthy and critical ill patients are shown. The image below shows a Poincare plot of my heart rate on my medical tricorder display: 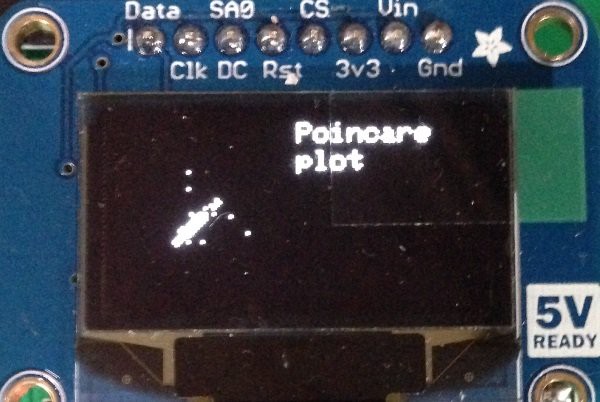 The Poincare plot after sampling is just a simple for-loop:

Basically the sensor consists of a disposable respirator- half-mask, a 3-D printed connection nipple, a piece of silicone hose and the pressure sensor MPXV4006GP. The advantage of this setup is that the respiration rate also can be measured during activities like running and the exhaled gases could be analyzed by a gas sensor at the same time. The renderings below illustrate the idea: 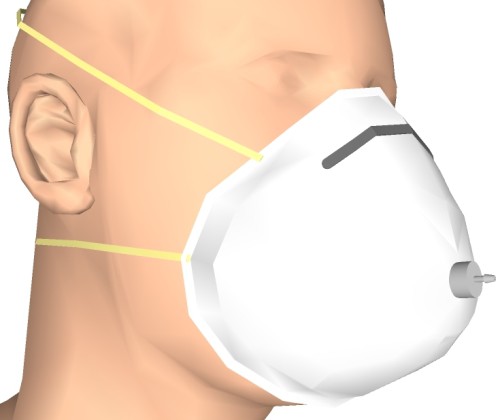 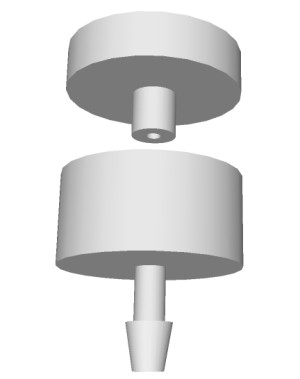 The connection nipple were printed on an industrial grade 3-D-printer: 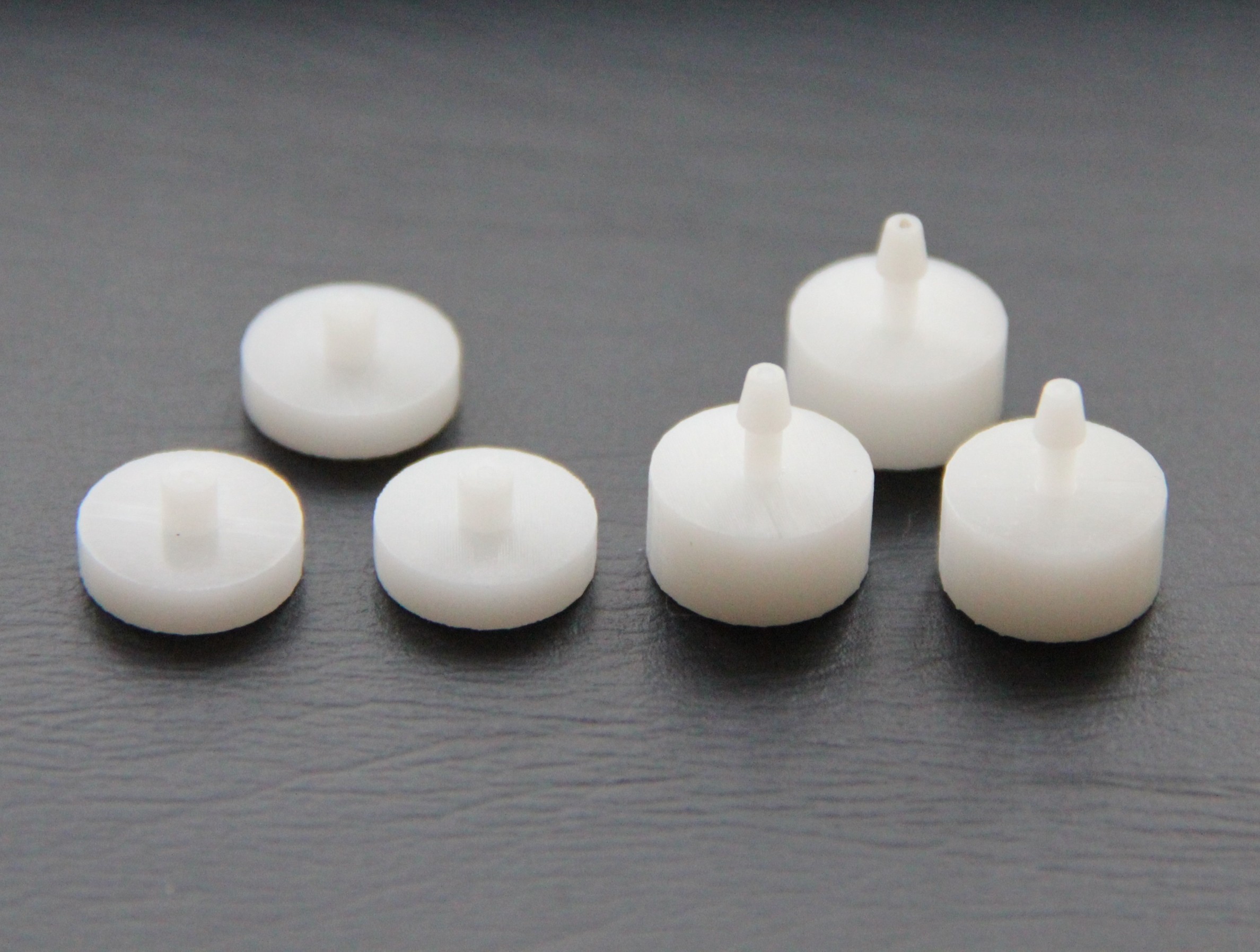 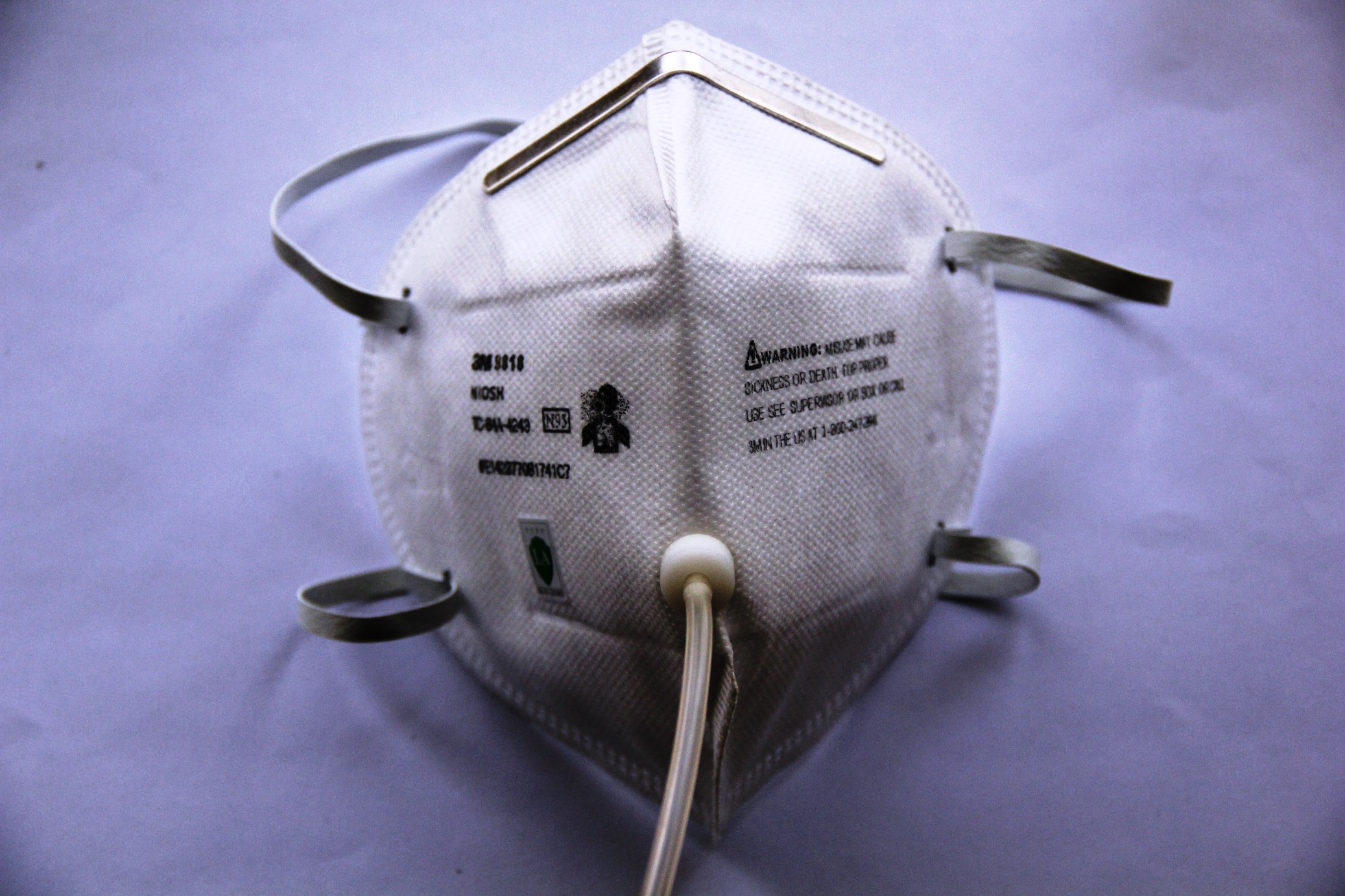 The gauge pressure rises only approx. 10 mm H₂O when breathing out, so the output voltage of the pressure sensor must be amplified. This is done by a non-inverting amplifier: 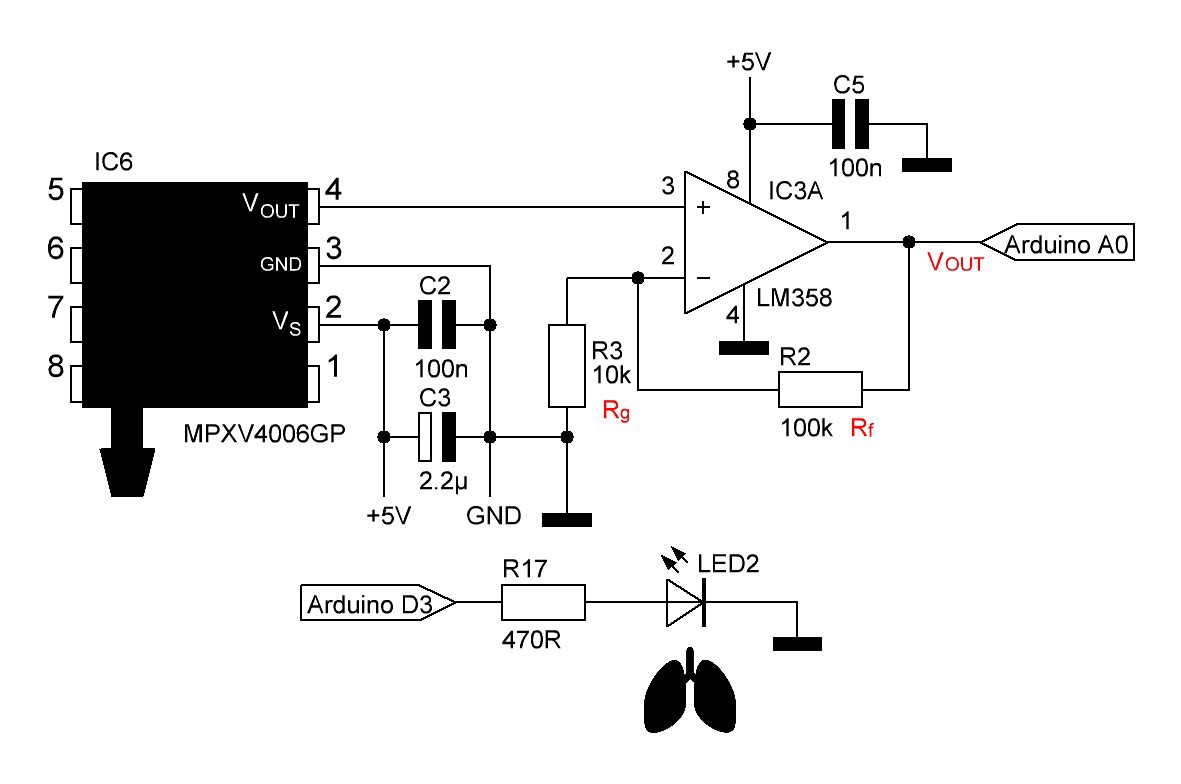 Vout is given by

I chose a gain of 11, which works just fine. 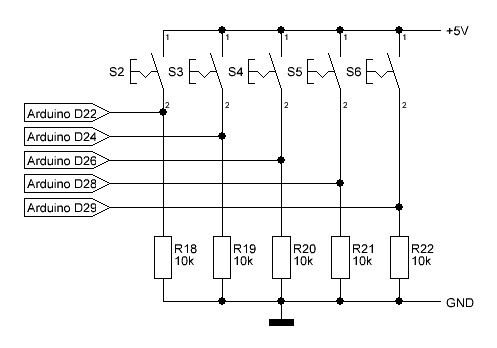 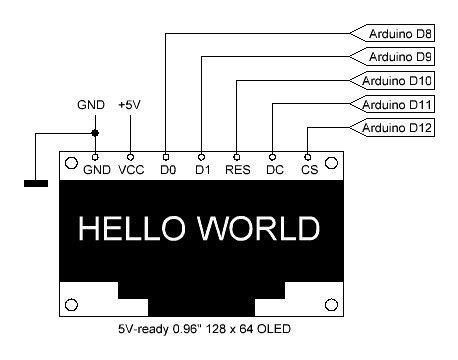 The micro SD card requires a voltage level shifter on SCK/MOSI and CS pin which is carried out with a HEF4050: 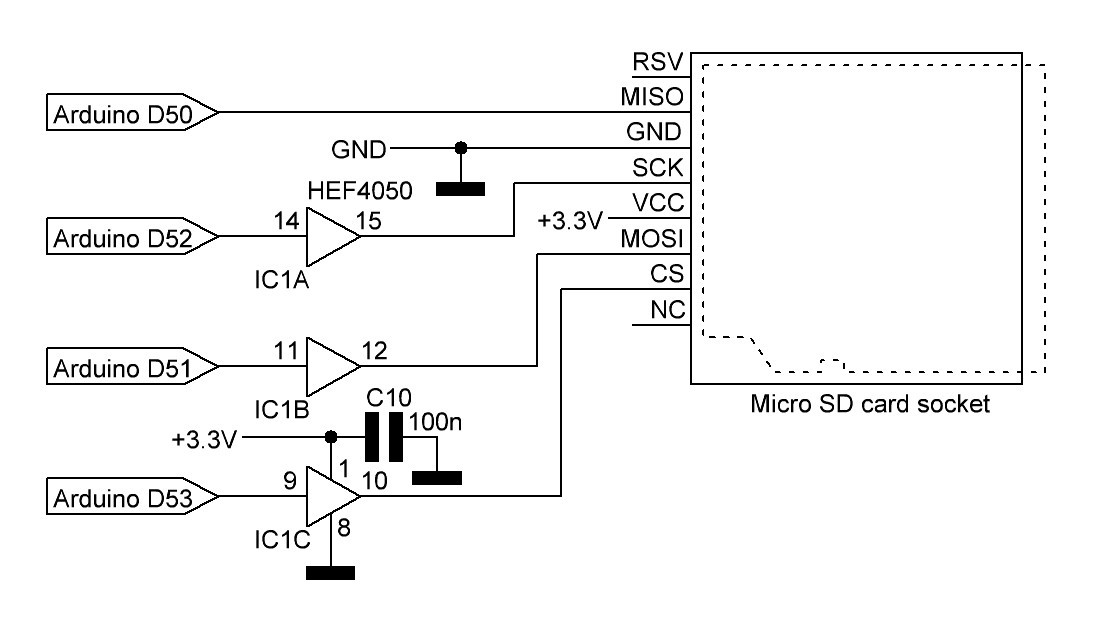 The Real Time Clock (RTC) is based on a DS1307 with backup battery, which should keep time for 5 years or more. Also here are no additional pull-up resistors for the I²C bus necessary. 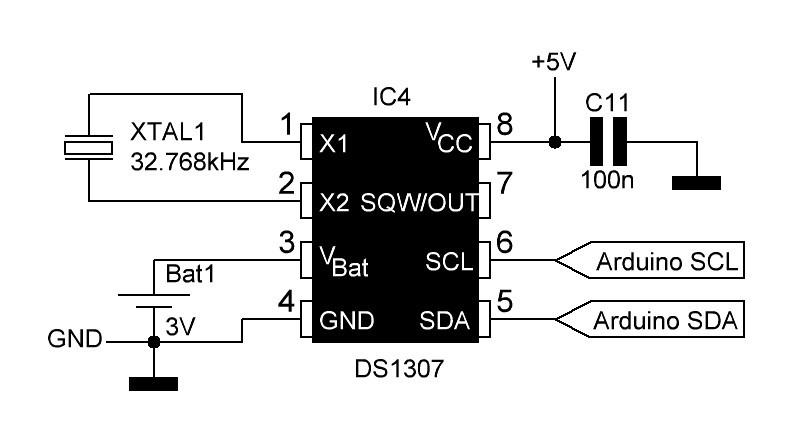 I also added a piezo buzzer to be able to emit acoustical warning signals, e.g. for a pill reminder feature. 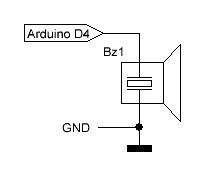 An according shield for the Arduino Mega was designed and the Gerber files sent to my PCB fab house. 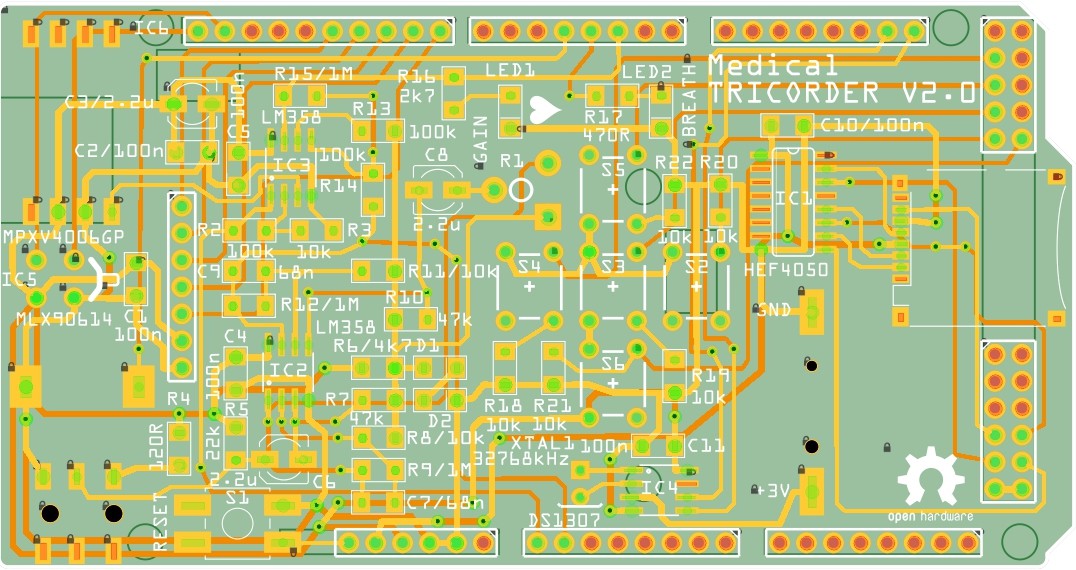 A couple of days later I got a bunch of PCB's. Time to heat up my soldering iron. 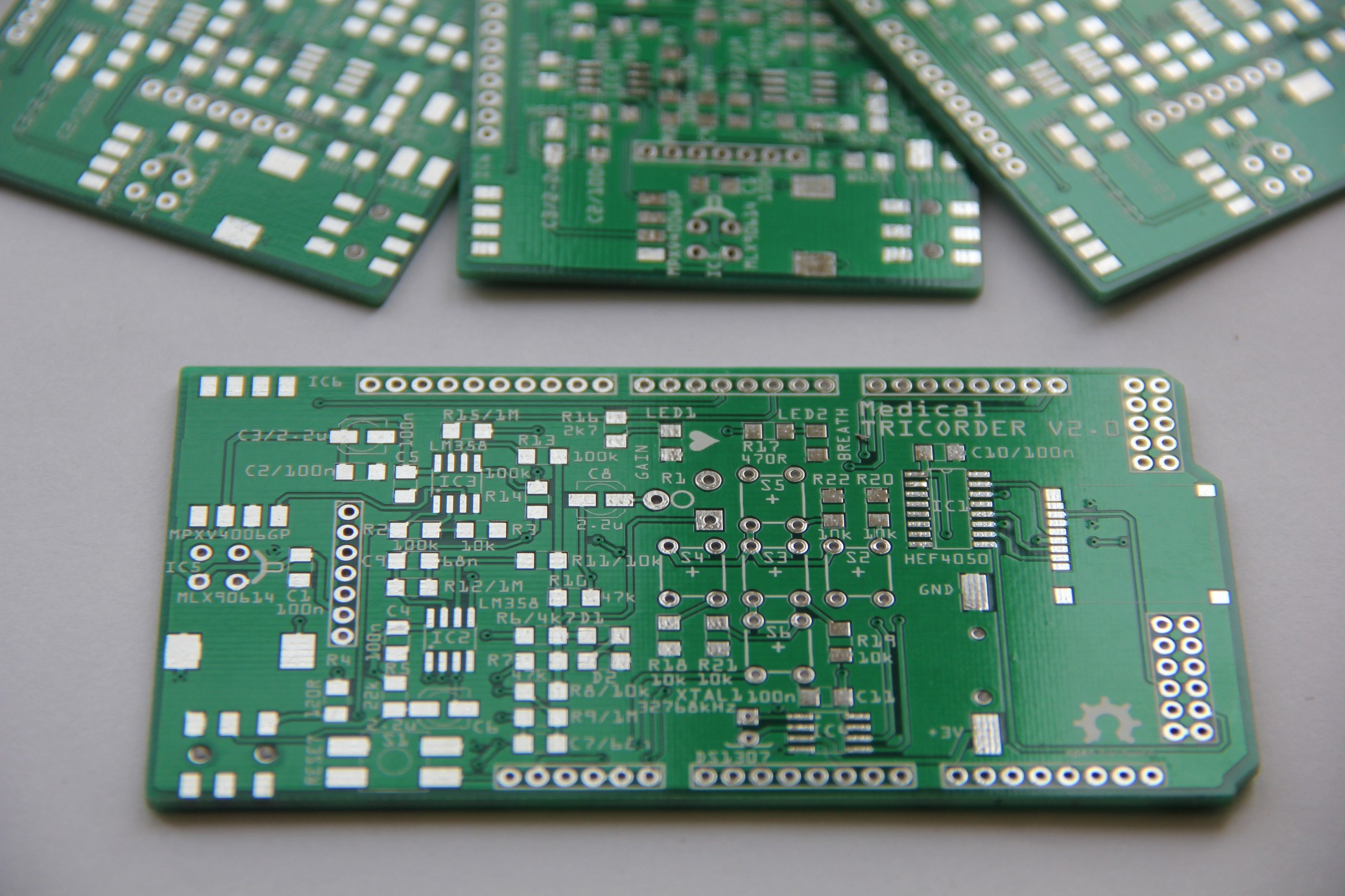 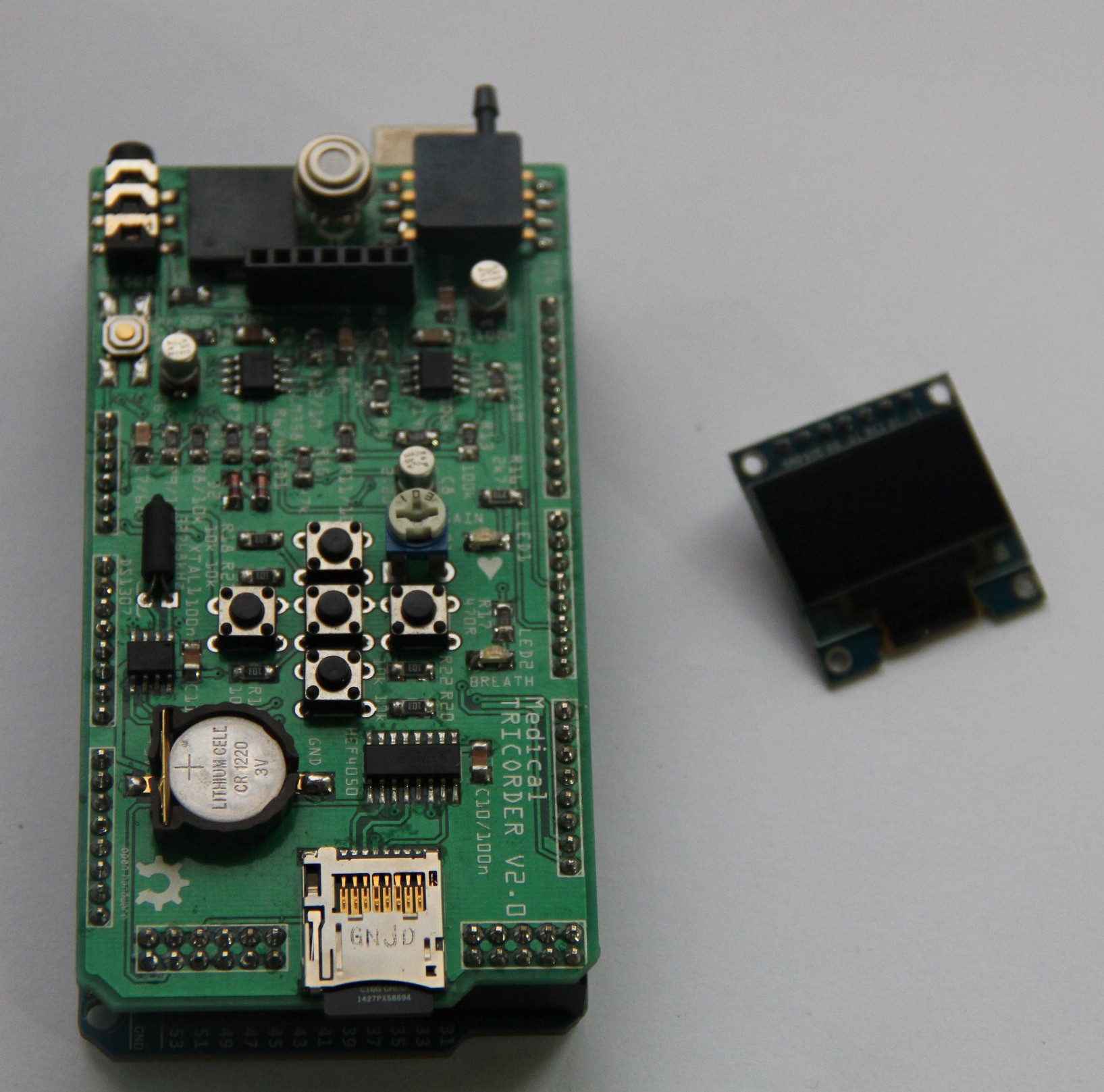 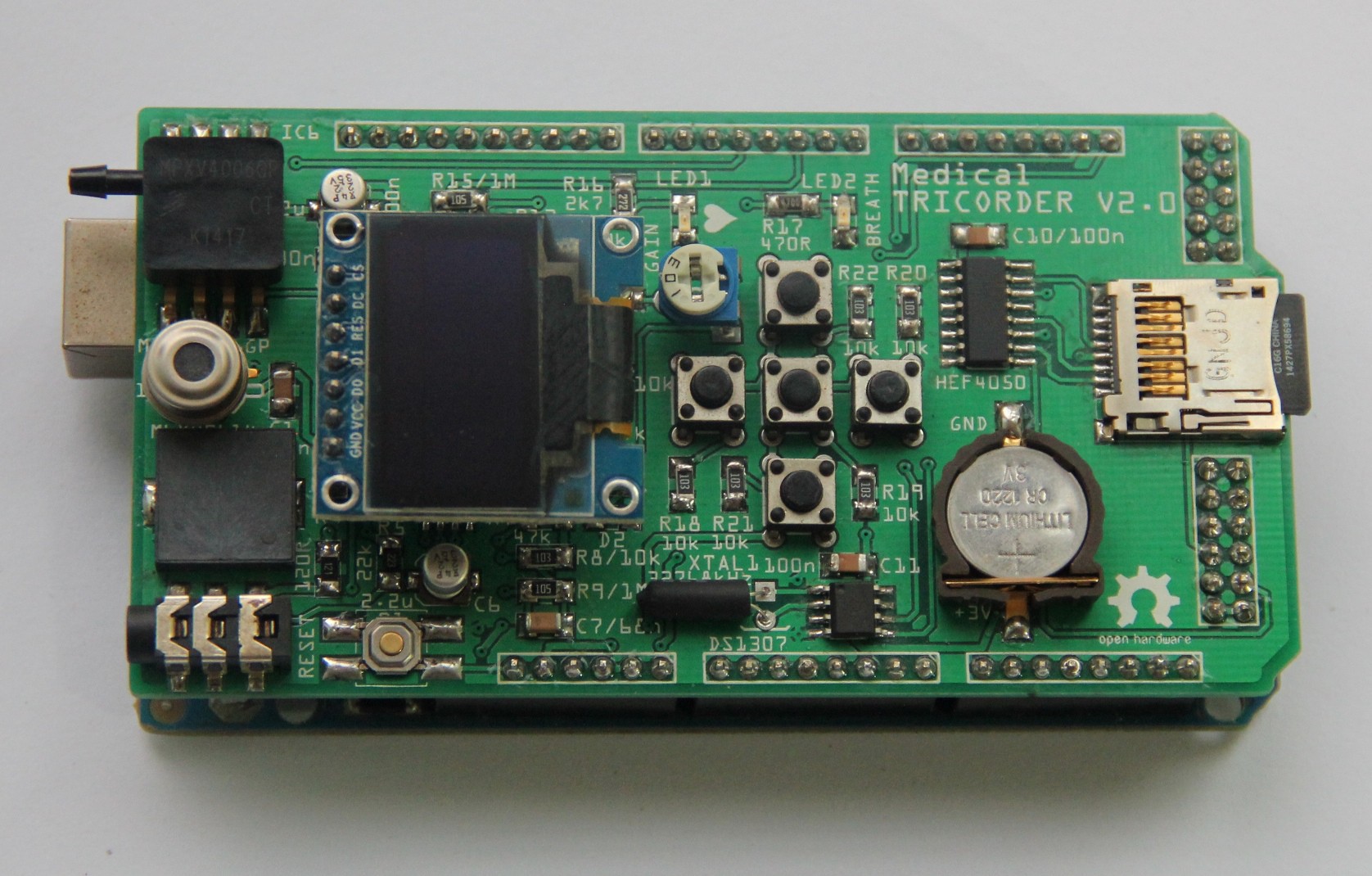 A lab-on-a-shield will be designed and build. Below renderings illustrate the idea. Two reagents can be injected into a micro reaction chamber and the reaction observed with a photometer/color sensor and PH meter, e.g. analysis for Leukocytes, Glucose, Bacteria... 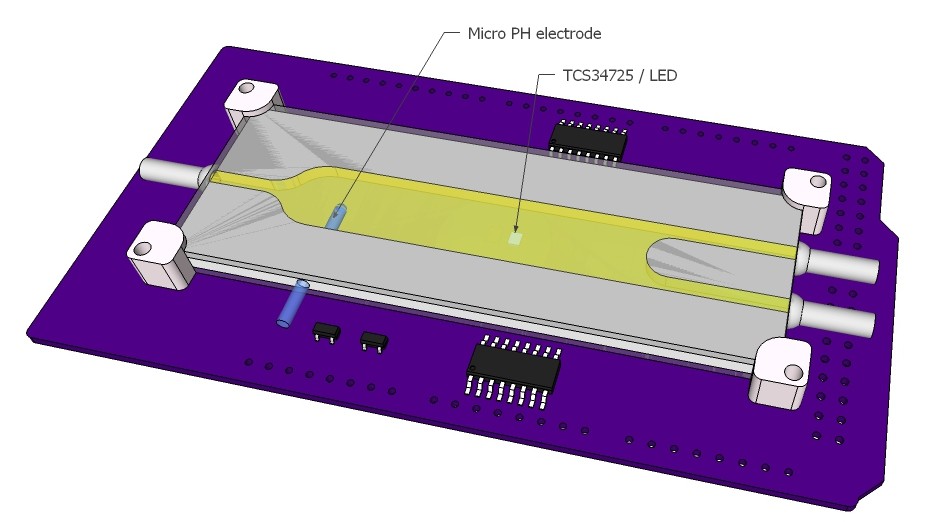 Check out the project logs for more details.