Okay, I'm editing this as my first attempt has been badly mangled somehow. Starting to regret using hackaday.io for this, seriously guys is there no markdown or something I can use with copy and paste from somewhere else or a preview option?!

Switches are simple right? You'd think so but when talking about home automation, not so much. Trying to find a UK back box switch of the right kind turned out to be harder than I thought...

From my general understanding and indeed from the videos I've watched, Loxone mostly assumes that you're going to go one of three routes:

For the purposes of this discussion, I'm going to ignore the KNX route as it doesn't meet my requirement of cheap ;) you can get KNX kit that's relatively cheap, but you're looking at £40 for a two button interface that you then still need to wire switches to much in the same way as the inputs on the Loxone.

I'm going to save passive infrared sensors for another post as I'm not done hacking on that yet... :)

So SPST momentary switches as my electronics knowledge would have me believe is what I want, the issue is that's not what electricians call them. Electricians call them 'retractive' switches, they may be single or double throw (SPDT). Having spent ages searching for standard UK faceplate SPST or SPDT switches, I can assure you that you'll have more success when you use the "correct" term.

Having established the correct search term to use, I managed to identify some suitable switches. @daveyb0y recommended some switches from Screwfix, so I got some of those to try too.

Cost: Low
Summary: Poor quality - feels cheap though you get what you pay for.
Supplier: Screwfix

This one came recommended by @daveyb0y and was available from Screwfix, which meant I could order and collect locally. It's a grid system module so in addition to the module you need a frame and then a nice front to cover over the metalwork. Grid system means there's more cost than initially meets the eye however it scales from one to lots of switches in a panel should you need that. I really wasn't impressed, though this is my first experience with a grid system. The metalwork portion of the grid floats in the centre of the backbox not really touching anything, then the front plastic cover sits on top of this. I found that it was almost impossible to get the plastic front to sit flush with the wall without it bowing on one of the sides due to overtightening the plastic cover screws. I'm probably doing something wrong but I was massively unimpressed given the plastic portion of the faceplate is the only thing to press it against the wall with. Willing to accept that I don't know how to fit these, but my current recommendation would be to avoid them. 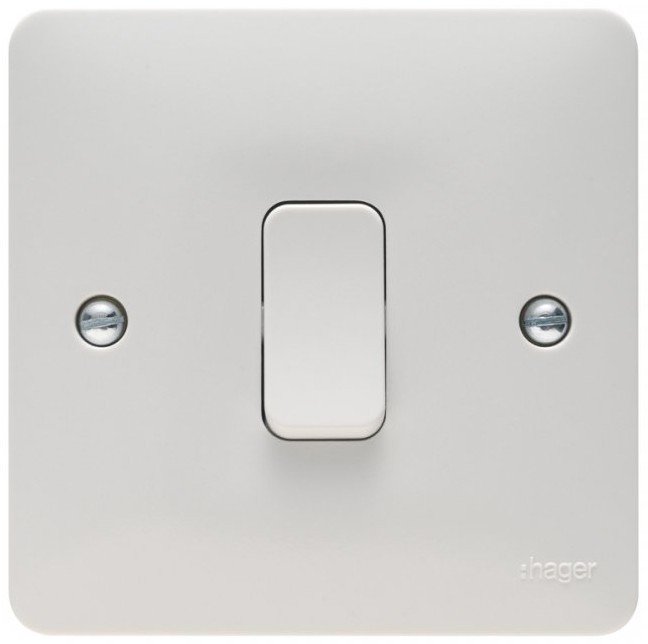 I called in Yesss Electrical on the off chance that they might have some retractive switches given that they advertise home automation things. This is what they had, and I'm so glad that I found them. The action and feel of the switch is really excellent and of similar quality that you find in MK fixtures. For single gang this is now my go to switch.

Having looked to see what else Hager had to offer, I was disappointed to find that they only do a single or grid module of their retractive switches. If the grid module is as good as the single switch, then it will be excellent.

Cost: Medium
Summary: Been impressed so far, though time will tell.
Supplier: My Switch Shop 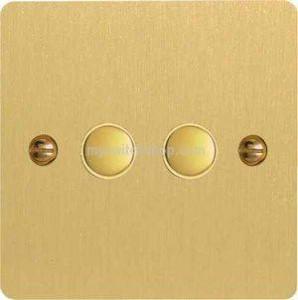 My significant other said that she didn't want a plain light switch in her bedroom, so the search began for a suitable brass effect fitting. This is what I found, and so far I've been impressed. The quality of the fitting feels good, though the action of the switches isn't the best. Time will tell on this, but for the finish and price they're great.

Bought from My Switch Shop - http://www.myswitchshop.com/index.php?main_page=product_info&products_id=9854

Cost: Medium
Summary: Been impressed so far, though time will tell.
Supplier: My Switch Shop 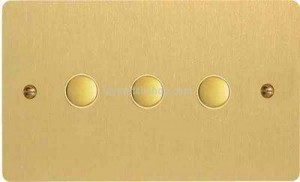 Same again, Claire said she wanted something nicer in the hallways and on the stairs so I found these. They'll be mounted vertically for top, middle and bottom floors. The two outer buttons seem to stick slightly on the plate with the middle button seeming stiff. Again we'll see how these do in the longer term.

Bought from My Switch Shop - http://www.myswitchshop.com/index.php?main_page=product_info&products_id=9858 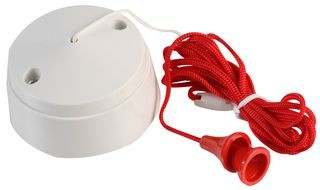 This is so far the only retractive pull cord I've managed to find and it's designed to be used as an alarm cord. So if you replace the red cord with a standard white one, it looks exactly like a standard pull cord. It's MK so I expect the usual level of quality that comes with that and no issues at all.

Once you realise that you need to be searching for retractive switches, there's a number of manufacturers that have suitable solutions. The main difference between each product is price ranging wildly from £3 to ££££ depending on what kind of finish you desire and your personal tastes. I can only speak to the things I've purchased or seen as a result of my purchases, as always your mileage may vary :)

The software only runs on Windows?!

Switches definitely aren't simple! With so many available it's difficult to get lost in choice.

I like to stick with simple switches that will last and do the job! https://www.toolstation.com/shop/p51663

I have bought anigmo switches. Modern, elegant and touchless switches.