I got some single-walled carbon nanotubes (SWNT) the other day. They're 5 nm in diameter and are functionalized with a detergent, which coats the SWNTs so that they can be dispersed in water. Here's a 492 X 492 nm image I took with the STM after placing a drop of SWNT solution on HOPG and allowing it dry: 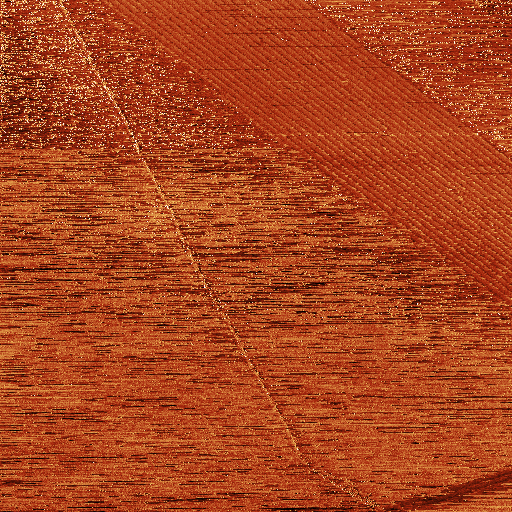 Those lines in the top-right have a ~5 nm pitch, so I suspect it's a bundle of SWNTs. The HOPG surface looks really "noisy", probably due to detergent left on the surface. I definitely crashed the tip at least once, so that might have something to do with it! Looks like the tip changes in some way about a third of the way down the image. I'll try baking off the detergent to see if it changes anything, and try a few more scans to see if I can find some individual SWNTS.

Be careful, a colleague just informed me of the potential physical dangers of carbon nanotubes because they are essentially the same thing as buckyballs.

Very cool.  Are these constant z or constant I?

This one is constant I. The line through the center may actually be a single nanotube, but I was having problems with this particular tip/sample (as you can see from all the background noise) and couldn't get any more detail from a smaller scan.