Cubes made from two-way mirrors and custom LEDs that allow you to create models, forests, and galaxies that seem to go on forever!

We've been working on infinity mirrors for a while and decided to try our hands at infinity cubes. That project turned into 7 one-of-a-kind art pieces, which inspired a kit that we developed so that people can make their own.

We'll have more updates soon on the process, the one-off pieces, the source code, and some really cool arduino tricks that we learned along we way.

We designed and built these infinity cubes based on a bunch of different inspiring projects that we found through Hack A Day and Freeside Atlanta. Here's a bit of a technical walkthough on how we did it - A few years ago, I collaborated with Tam Sicay-Perrow on an 11-foot-tall infinity mirror. I ordered some extra acrylic for destructive testing (since I didn't want any nasty surprises with the full version). I destroyed a few of the 6in squares with water, scratches, and UV but still had the rest left over. 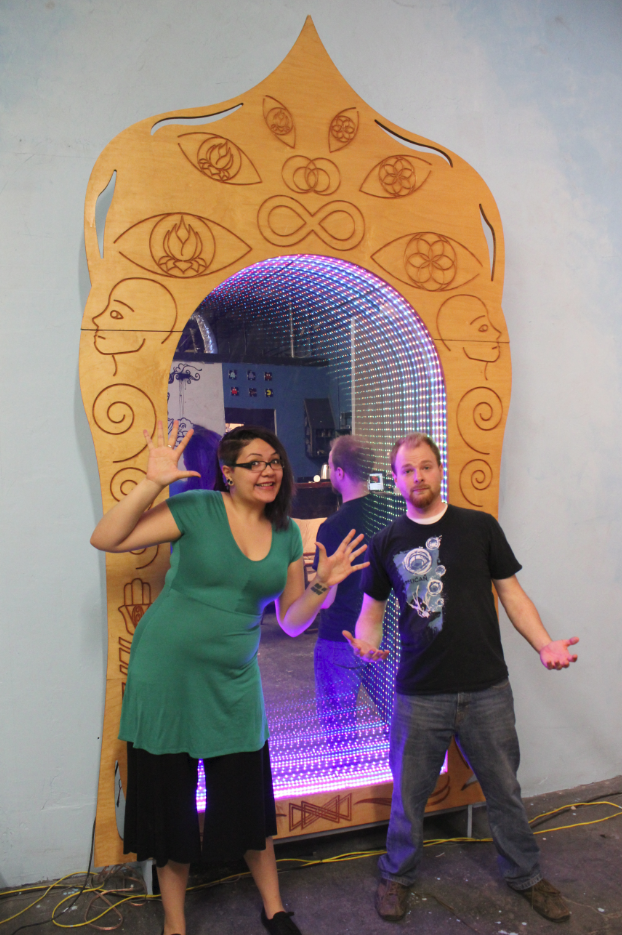 I started collaborating with Kat Moenk on LED clouds and frames about a year ago and we stumbled onto the extra squares of acrylic. So we decided to build some infinity cubes. 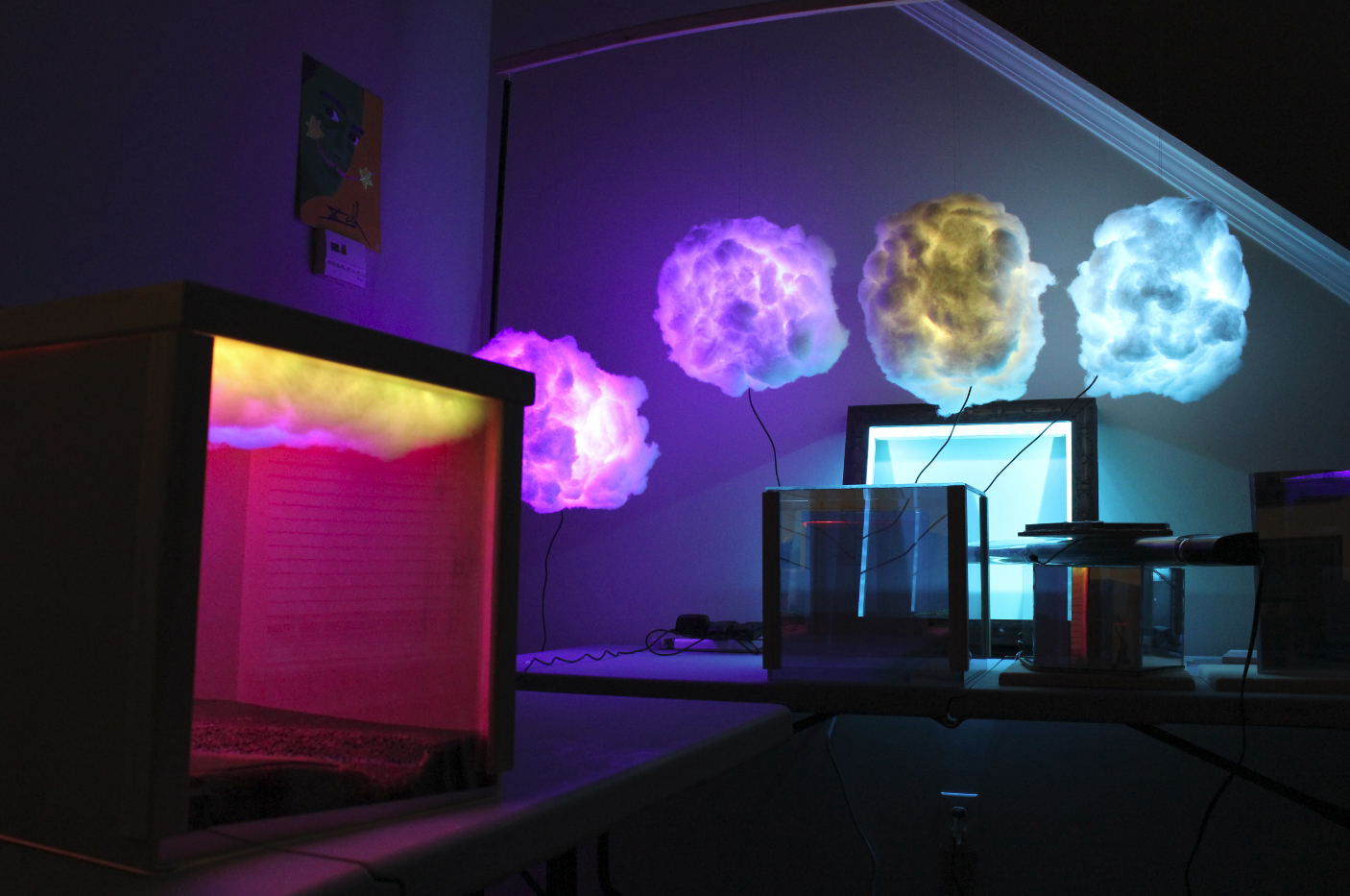 Since I've already told the story of how we designed and built the forest cube, I'll show a build log for the Starfield cube here.

I had an extra Teensy from the Portal project and I already had a familiarity with OctoWS2811, so we just went with the Rainbow demo on that for protoyping the cubes. 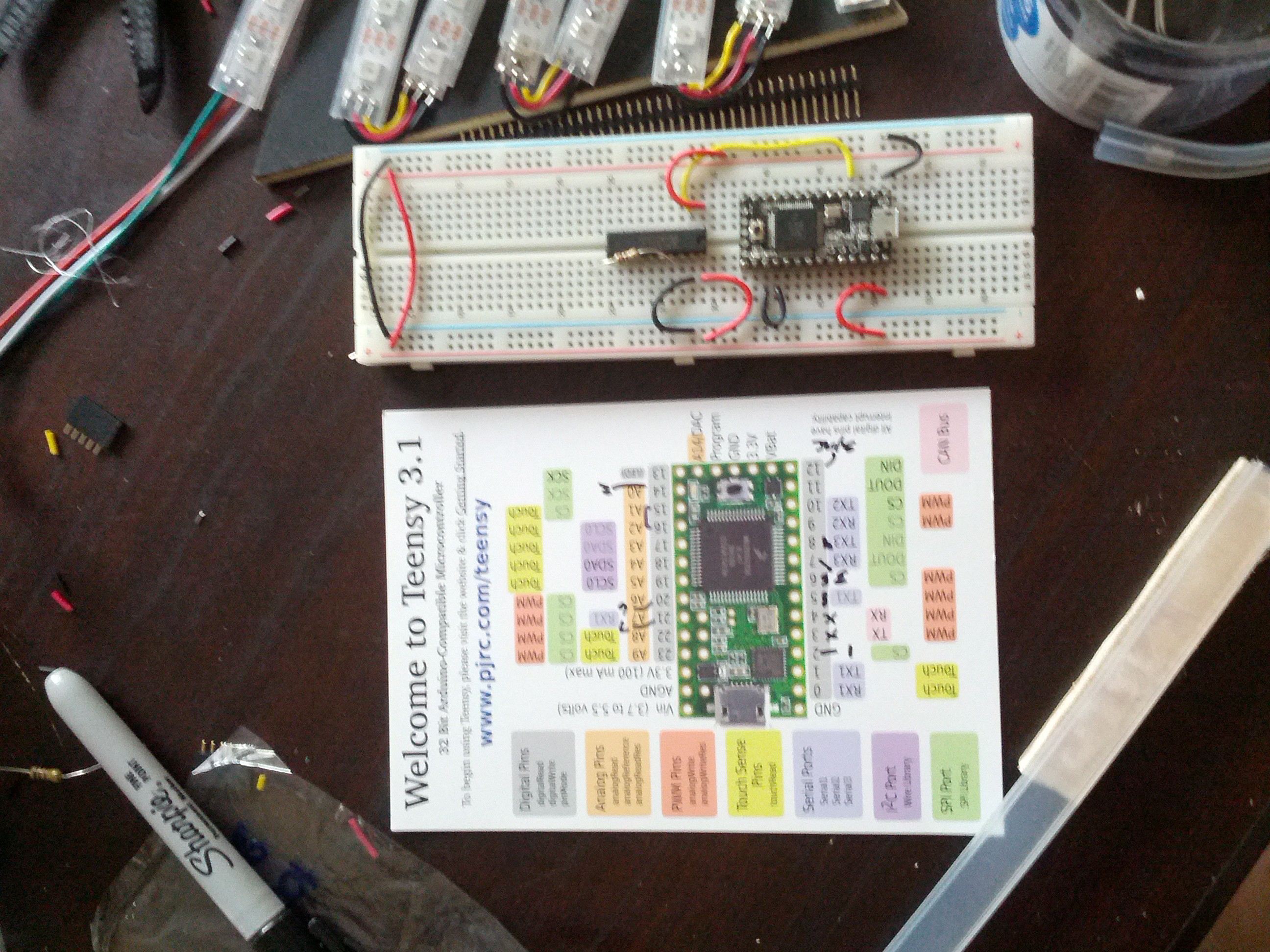 We slammed the cubes together with epoxy and angle brackets from the local hardware store because we wanted to get it done that day. That's a terrible idea and you shouldn't do that. But it got the job done here and we were able to break the cubes we made like that apart to recover the acrylic later anyway. 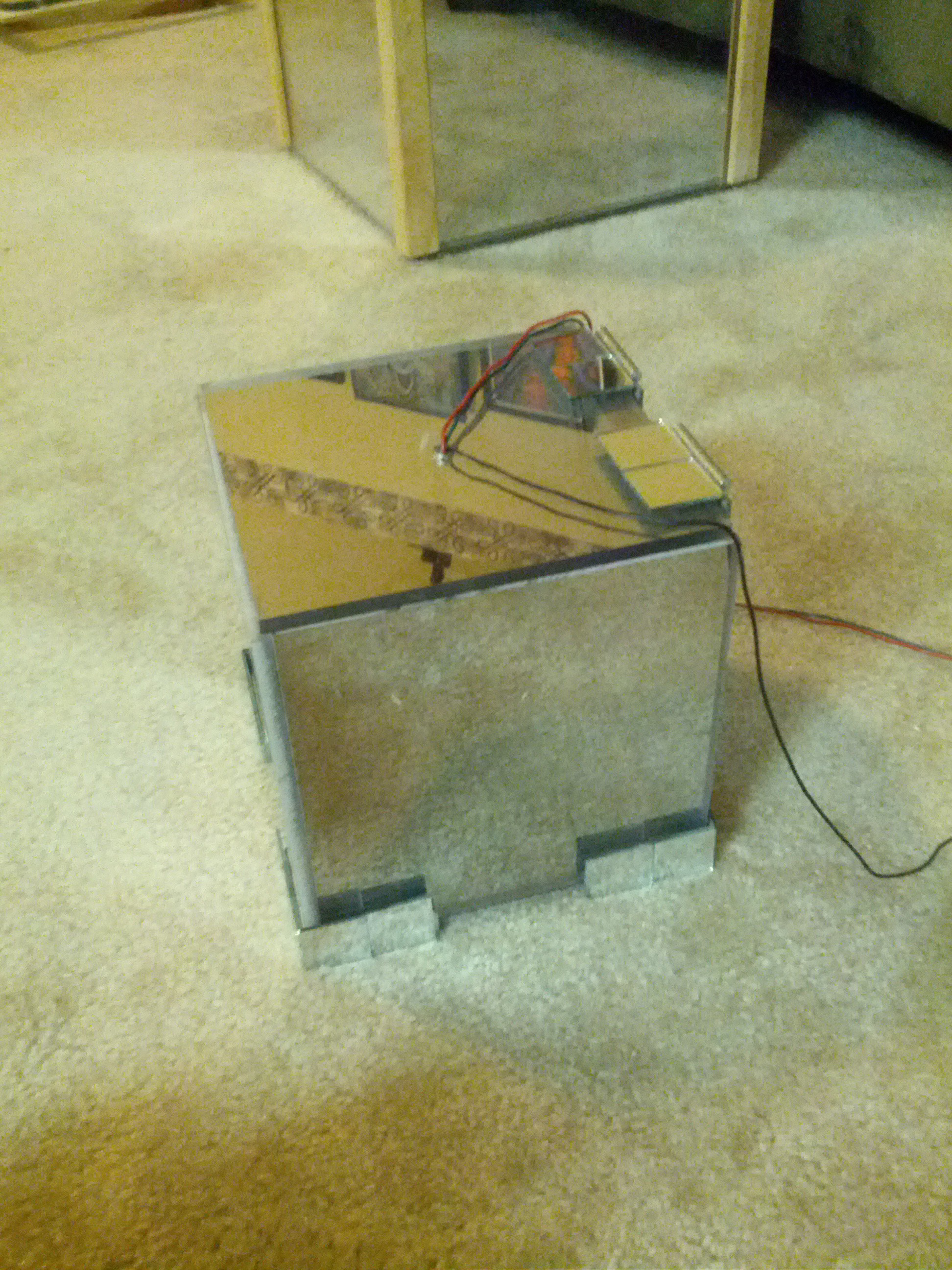 We soldered some LED strips to 3 pin connectors to hook up to the Teensy and got some sweet sweet rainbows going! Again, in a rush to get the project to a point where we could have a look at it, we literally just crumpled a ball of masking tape into a wad and attached it with elecrical tape. We tried to cover it up or pull it out of focus in most pictures, but if you look at most of our early pictures, you can still see it. 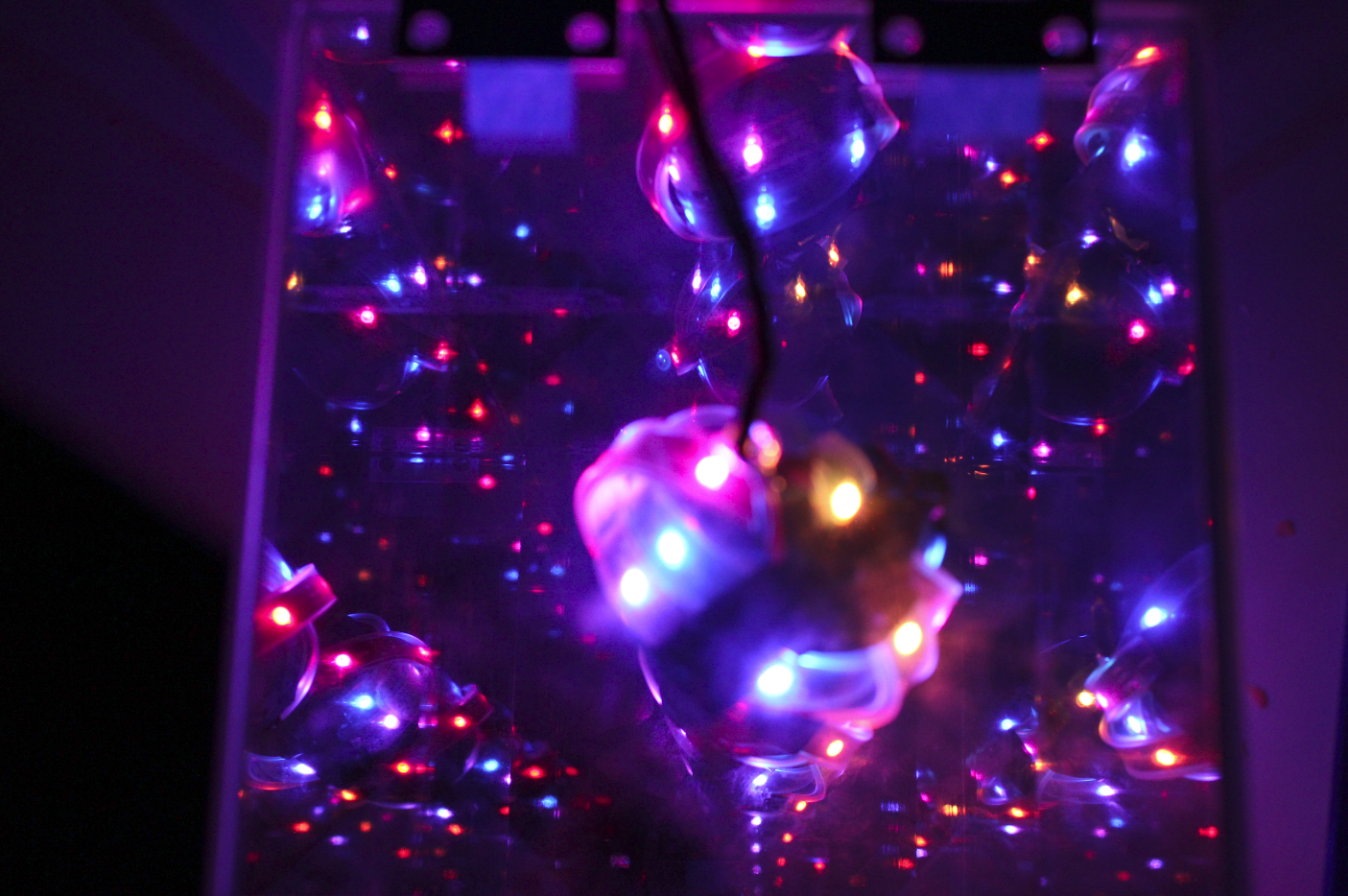 We had some mirror tiles handy, so we started playing with those too - 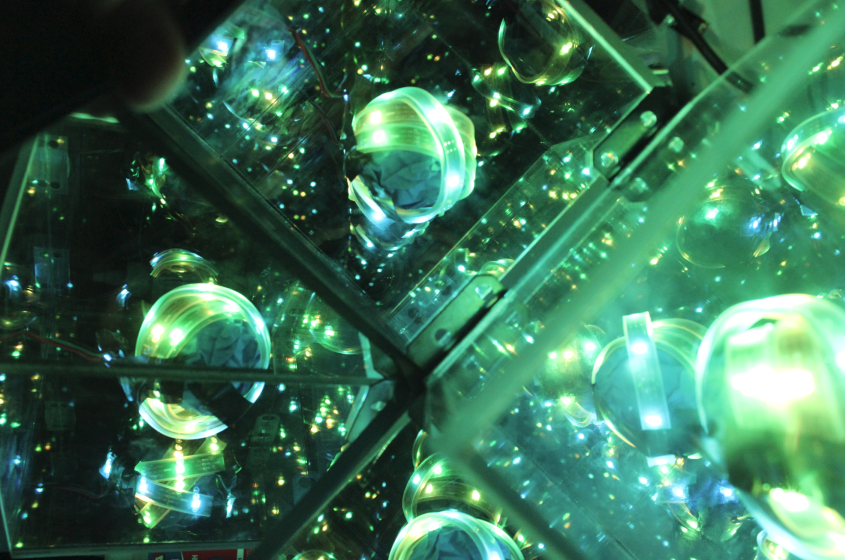 Okay, so we decided that this is definitely a cool project and something worth pursuing more. We wondered what it would look like to put this cube inside a larger infinity cube, so we ordered the parts and made this (there is also a preview video of it here) - 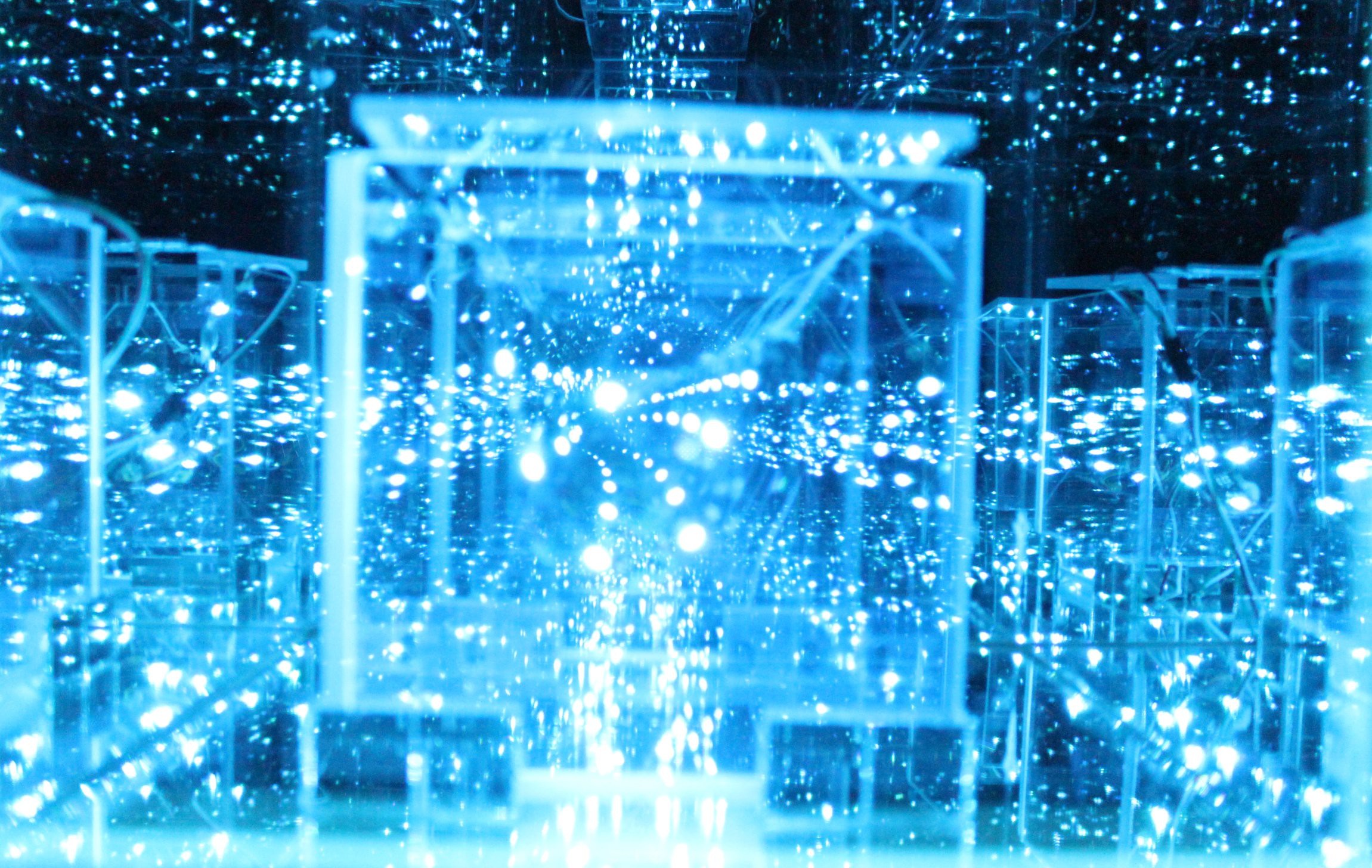 We had the look that we were going for down, so it was time to work on fabrication technique, animations, and design testing. We switched to laser cutting and started incorporating finger joints and tab-and-slot construction. 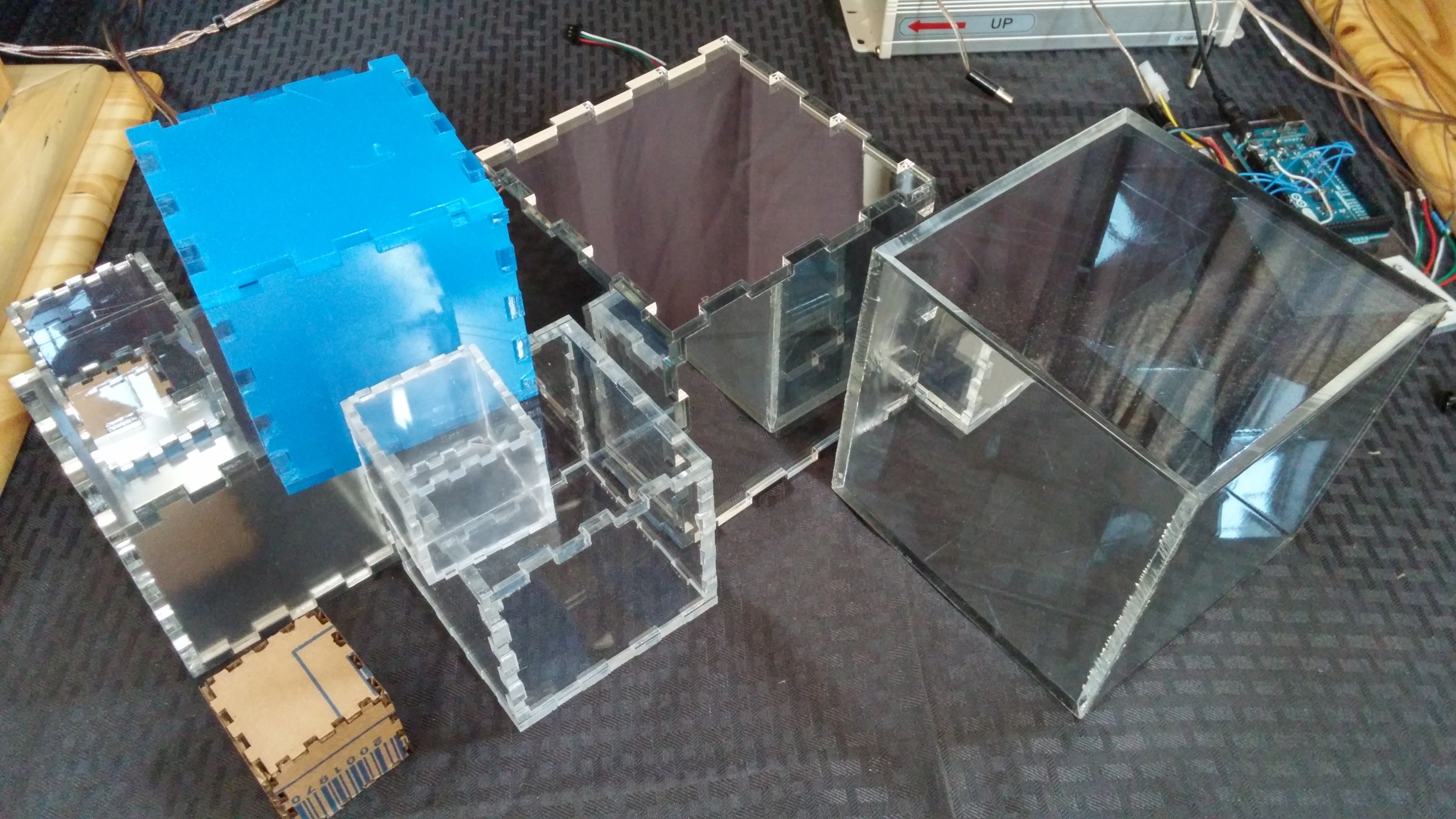 We designed these triangular bases for some of the smaller cubes, but found that when the cube was turned up like this in the Starlight Cube, we got a much more random lighting pattern than the "hallways of light" that we got from the earlier prototype. 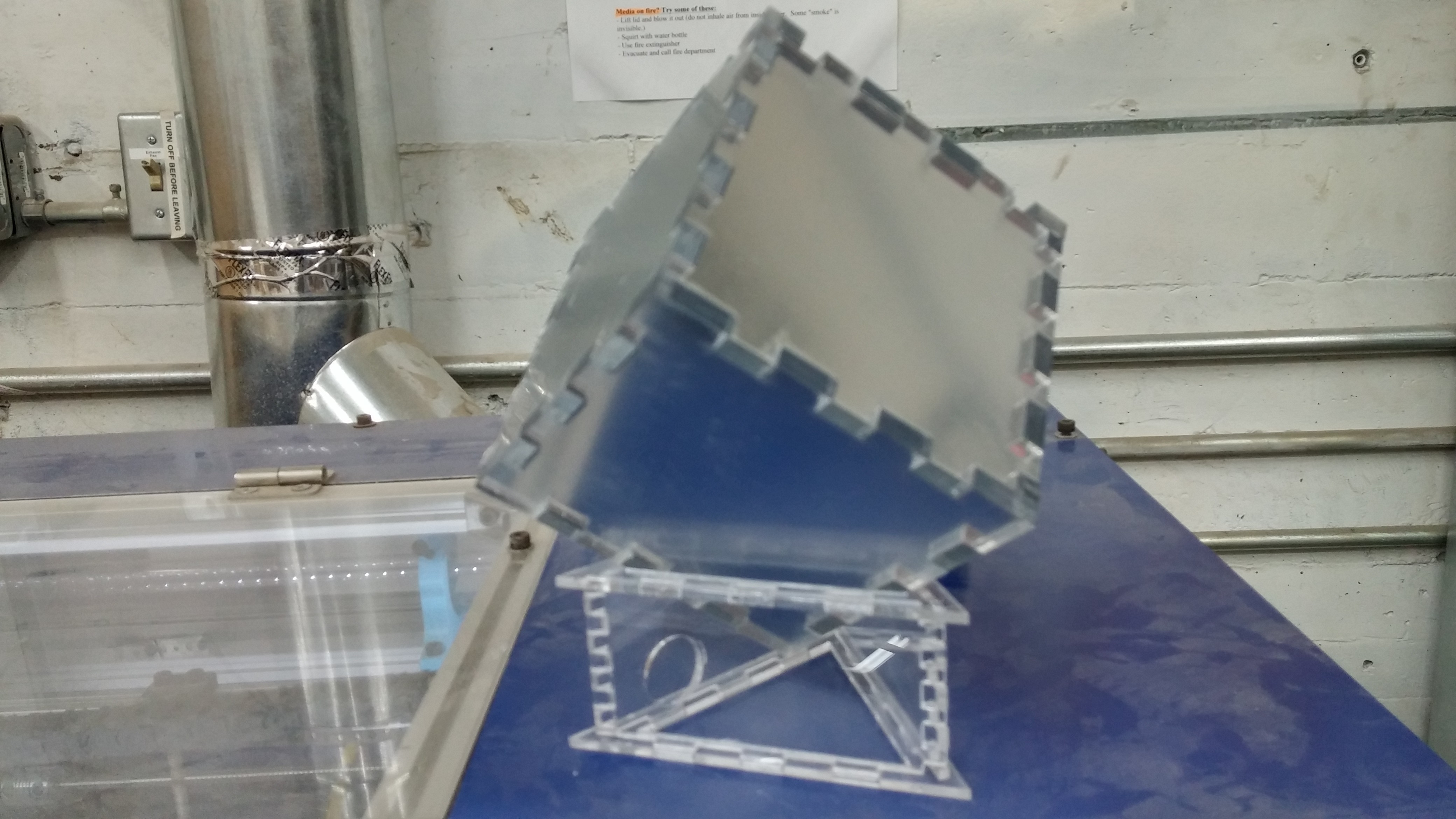 We also set up animation patterns based on color theory, so that we could show random colors together that would be complementary and pleasing to look at. The source code for this can be found here - http://pastebin.com/pVYByhAa

The code includes a few modifications to the NoisePlusPalette example included in FastLED3.1 -

2) You can trigger the animations to advance frame-by-frame and preview the final framerate for caturing the animations with a motion control rig like the one we used from Dzignlight Studios in our Kickstarter video.

We also use some other code for randomizing animations that is featured heavily in our videos, but I'll do a write-up on it separately since it merits it's own section. 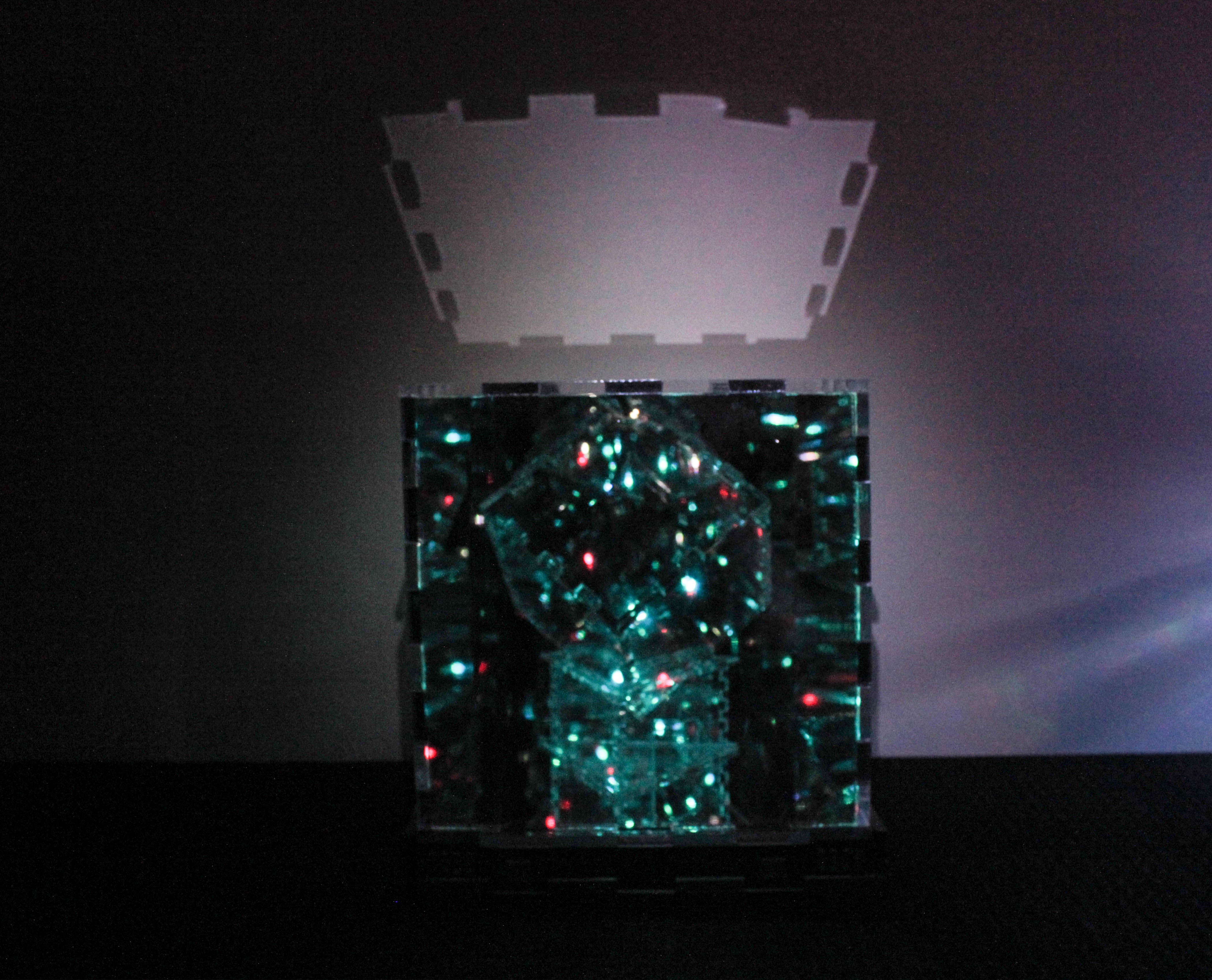 We decided that this whole project was complicated enough. so we decided to make a kit to simplify the process and help people get started on their journey into infinity.

We have more examples of our prototypes and one-off art pieces in our gallery.

You can find our full video and kickstarter page for infinity cube kits here.

What about your project? Is it alredy live?

Will there be information for DIY'ers?

Okay, I posted the DIY info in the details section. I hope that helps!

A series of 3d printed hexagonal panels outfitted with a number of 24-bit neopixel LEDs provide the backdrop to my invention room.
Project Owner Contributor

Official Hackaday Prize Entry
Tennis court staff flip a switch on a small box and an update is posted to a web page for players to check before they call or leave home.
Project Owner Contributor