There are a lot of ways to power the phono stage, but they might not be too obvious as it needs a dual power supply. That's positive voltage, ground and negative voltage, in the range of +/- 9 to +/- 18 volts.

I'll give you three ways of powering your phono stage, starting with the absolutely best one:

+/- 15 volts is commonly used for operational amplifiers, and that's what you get here.

The quality of this power supply is exceptional, and it must make you wonder what goes into the $1.000 (or more!) power supplies that some manufacturers will be more than happy to sell you.

This is how you hook up the Muffsy Hifi Regulated Dual Power Supply: 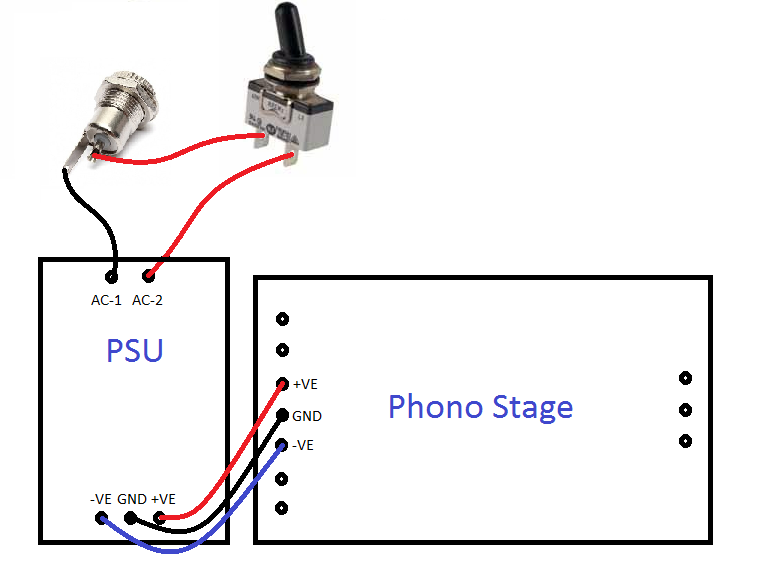 The power comes from a 15-18VAC wall wart into the power connector (top left).

One of the cables go to directly the PSU, the other through a single pole single throw (SPST) power switch and then to the PSU. This is how we can turn the phono stage on and off. You don't have to worry about the orientation of these cables, as they both carry the same AC power.

Both power cables are live. Make sure that both the power connector and the power switch are completely isolated from the chassis/enclosure!

With power going into the power supply, you'll get +/-15VDC from it. Connect the +VE, GND and -VE on both boards, and you have power on the phono stage.

If you want to add an LED, the Muffsy Hifi Dual Power Supply has you covered.

You can even power the phono stage with two 9 volt batteries, and it will run on them for weeks. Here's how, referring to the picture above:

A suitable power switch would be a DPDT, since you need to break both +VE and -VE. Here's a diagram of the cabling with power switch: 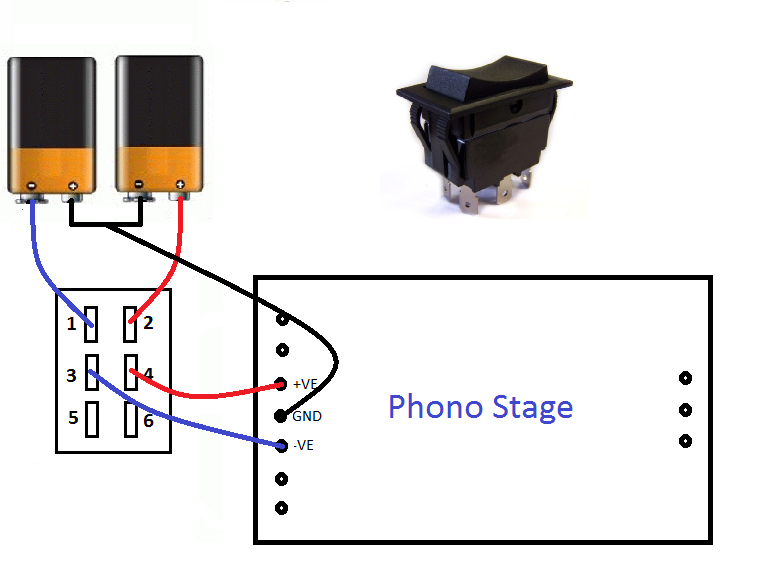 LED for batteries will have to be connected between +VE and -VE. The resistor in series with the LED can be from 820 to 2k2 ohm rated at 1/2W. Lower value gives more brightness.

Just keep in mind that an LED at max brightness uses the same amount of power as the whole preamp. I would recommend using 2k2 ohm and sacrifice some brightness, just to make the batteries last longer. (If the resistor is 1k2 ohm or higher, 1/4W can be used.)

The first two options were either an AC power that was converted to dual DC, or two separate batteries. There's another way that's quite neat as well. On paper, it should be quite a lot worse than the other two. We'll see that it might be a good option after all.

I was in the position where I powered a class D amplifier with an old 19.5 volts laptop power supply, and I wanted to add the phono stage to this setup. A voltage divider was not an option, as the virtual ground and real ground would connect. Not wanting to short-circuit everything, I had to find another solution. 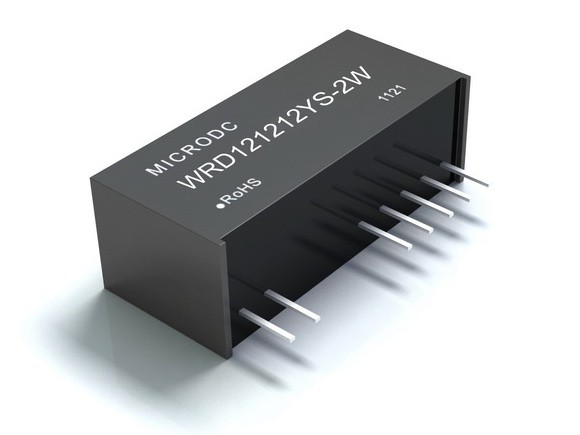 Here's how to wire the WRD, complete with (an SPST) power switch: 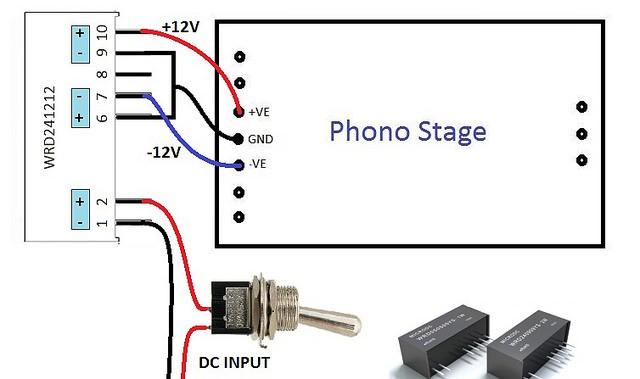 (The WRD PSU is much larger on this picture than it is in real life, just to make the wiring easier to see.)

So why is this the worst (on paper) solution? The WRD power supply has a very high ripple. up to 50mV, which is 500 times as much as the Muffsy power supply. That is quite a bit worse, to be honest.

The phono stage's onboard bypass capacitors will filter away much of this ripple, and the ripple rejection of the operational amplifiers takes care of the rest. I have used this solution, and it is absolutely impressively silent.

If you want to add an LED, connect it between -VE and +VE. Connect a 1k5-4k7 ohm resistor, rated for 1/2W in series with the LED. Lower resistor value gives brighter light. (If the resistor is 3k9 ohm or higher, 1/4W can be used.)