Some thoughts about my version of the Stickvise

Made my own Stickvise from some pieces of brass and aluminium I found in the cheap scraps at the local metal supplier, and some stock I had.

I was hoping to be able to post this sooner, but I was busy (preparing for and going to a festival and a vacation and other stuff).

I made a Stickvise video for my Youtube channel. It has two parts, a bit of construction and a time-lapse video of me using it for the first time while soldering a pcb kit.

I have a small Proxxon vise with two slotted aluminium strips, but that vise can only hold narrow pcb's (3 or 4cm? ). For larger prints I used to use a +/- 15 cm x 30 cm piece of wood wrapped with 1mm thick aluminium sheet to protect my desk. 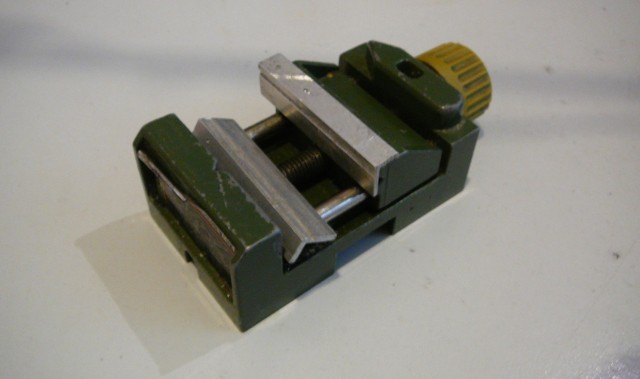 Working with the vise for the first time was awesome. The moment a board is clamped in a the Stickvise it becomes one with it, and handles like solid object with some mass instead of a flimsy board. No user manual or explanation is needed, there is just soldering before and after a Stickvise.

But after a while I started wondering if I was using the vise as I was 'supposed' to. I noticed I was using the vise on its side a lot. I think it had to do with the kit I was soldering. The leads on the provided resistors were a bit thin compared to the hole sizes. And the board had an high voltage part which needed to be tidy, so I didn't want to bend the leads outward to much to hold the components for upside-down soldering.

I hadn't considered it, but with the jaws raised (position C in the drawing below) the vise was stable enough to use on its side. Components like small resistors or long headers were easy to tack with one hand resting on the vise, supporting the component with one finger and holding a bit of solder on the other side.

I also thought I would be reversing the board more often. Instead I just flipped the vise and soldered the tacked parts. With the thumbscrews on top I had enough clearance for all the headers with the board clamped in the lowest position. The stick didn't interfere with the through hole leads that much and when it did I could easily slide the PCB in the jaw.

Something I thought about but didn't have were pointed grub screws. If you have 2 or 4 of these (with fine points), you can easily mark out the drill holes for any jaw-to-be. (image source: http://www.modelfixings.co.uk/)

I hope this gives some of you new ideas for jaw designs, or encourages you to buy or build a Stickvise.

While writing this I wondered how I would tack a long header without using the vise on its side and had two 'epiphanies'. Maybe these methods are very common and nobody told me, but I won't withhold them from you :-)

1 : Grab a header pin in a clothes-peg and cut the peg while holding it in a (regular) vise 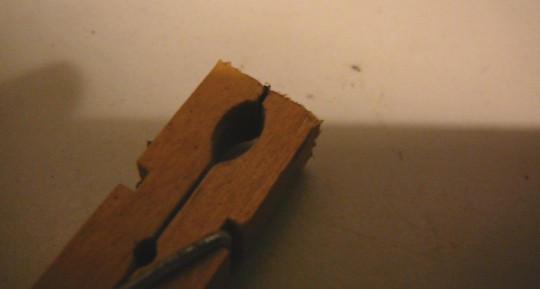 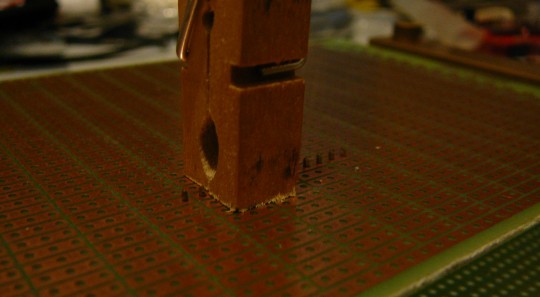 2: or just attach the header with two of those black pin spacers. 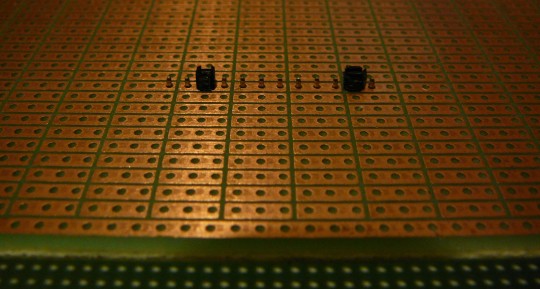 Wow it was awesome watching your video - couldn't be happier that you made this and have put it to good use!  Appreciate the free advertising Martijn!  Maybe I will share plans on my site for making Martijn style jaws using L-brackets like that, I like how you can get so many different configurations out of them.

RE: through hole parts - I agree, those are tricky to solder, I like the idea of the safety pin or the jumper to hold things, maybe an alligator clip would work too.

Thanks!, Feel free to spam the link.
Martijn style jaws? sounds good to me :) .

Alex Rich wrote 09/18/2015 at 15:05 • point
This blog post describes how the stickvise clamp works if you want to copy it. It works well: http://blog.cnccookbook.com/2015/06/19/clever-stickvise-from-a-cnccookbook-customer/ Also if you're into machining, definitely read cnccookbook, fantastic site

Looks nice but I can't use that method without making a new, how do you call it, 3rd jaw? I had another solution in mind for fixing the stick clamping, I'll show it when it's ready.

There should already be stuff in my to-do bucket for which I can use that split collet clamping instead of the usual rod clamps, definitely going to try it (a vise stop is somewhere in there too ;)
I don't have any cnc machining experience yet, but that site looks really interesting.