After some more sawing, screwing, connecting and cursing I can now show some pictures of the finished hardware. The tube in the background has a slight kink, but that doesn't obstruct the flow passage. I'll try to remove that later with a hot air gun. As it's a teflon tube it is quite sturdy and really doesn't like being bent, but I couldn't get more flexible silicone tube for high temperatures in reasonable amounts or at reasonable prices. 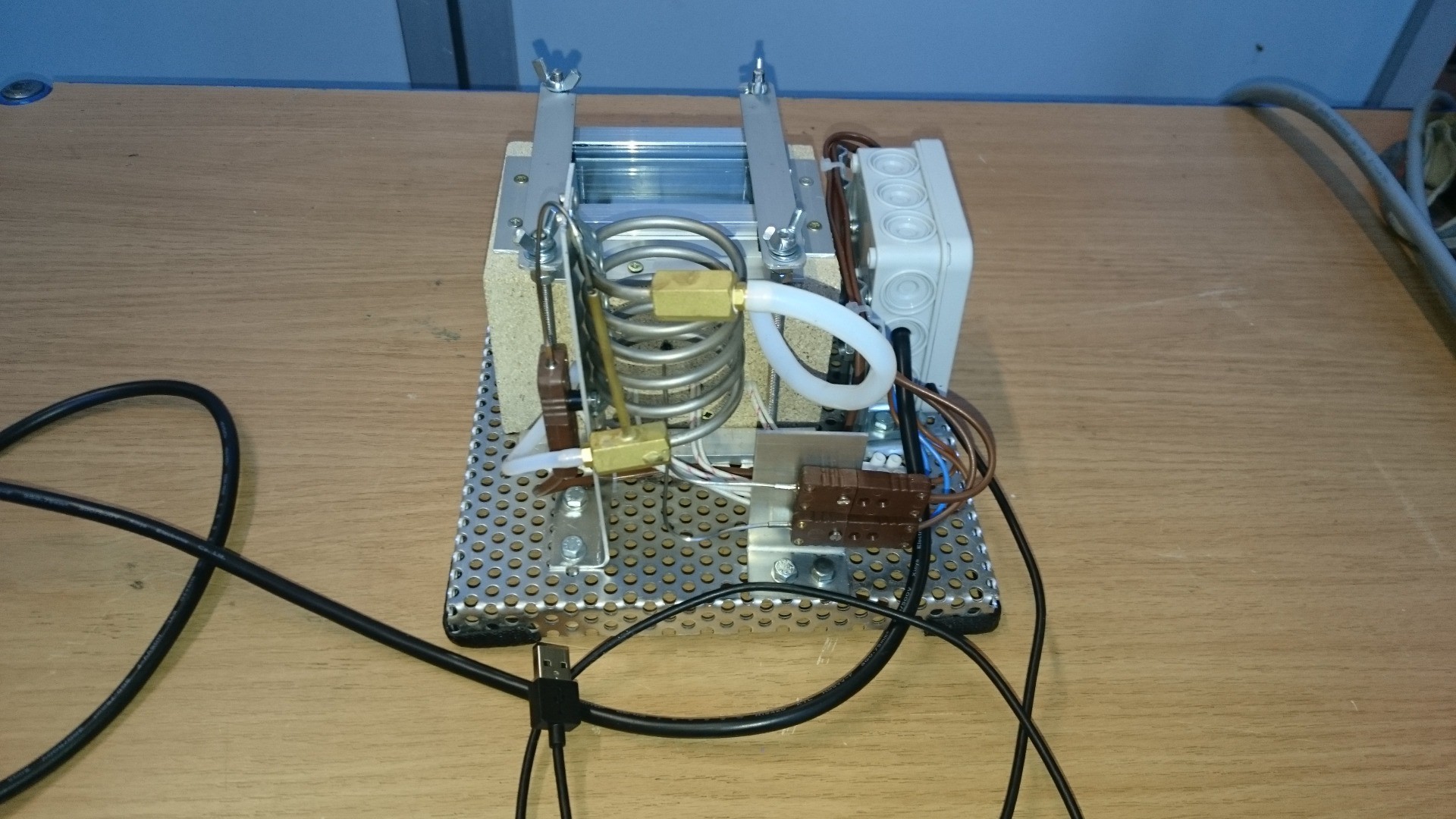 As the thermocouples are fixed in place with silicone (in the chamber), I made a small bracket to stabilize them. The upper thermocouple got loose during assembly so I had to attach it again, and the silicone needs some time to cure. No testing today!

The chiller is mounted with another bracket, and has a thermocouple at the outlet. I'm planning to use this to measure the amount of excess evaporating galden. I'll write more about this when I did some testing as I have no idea about how well the system reacts. 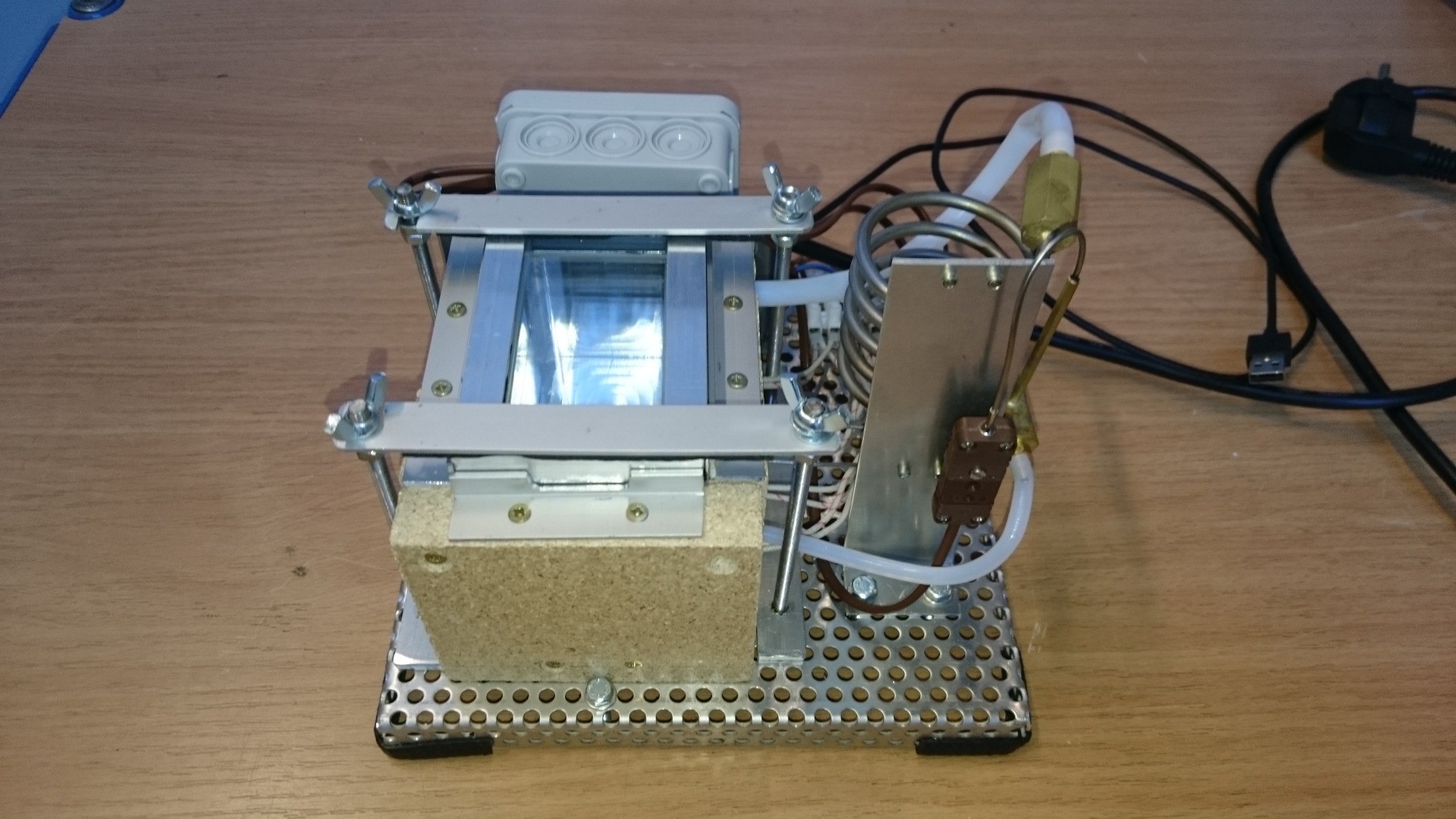 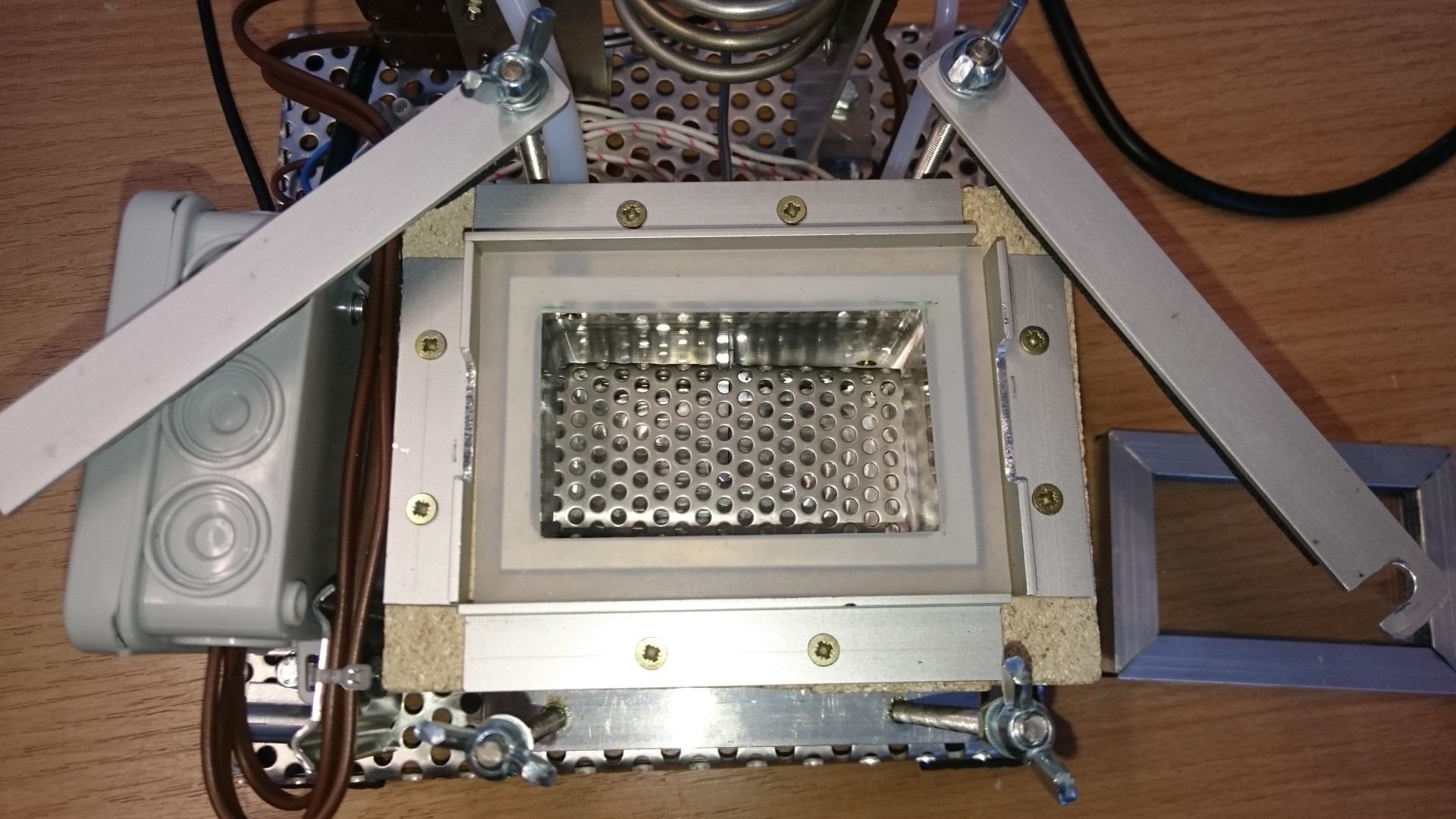 The clamps swing away to the side to release the lid. 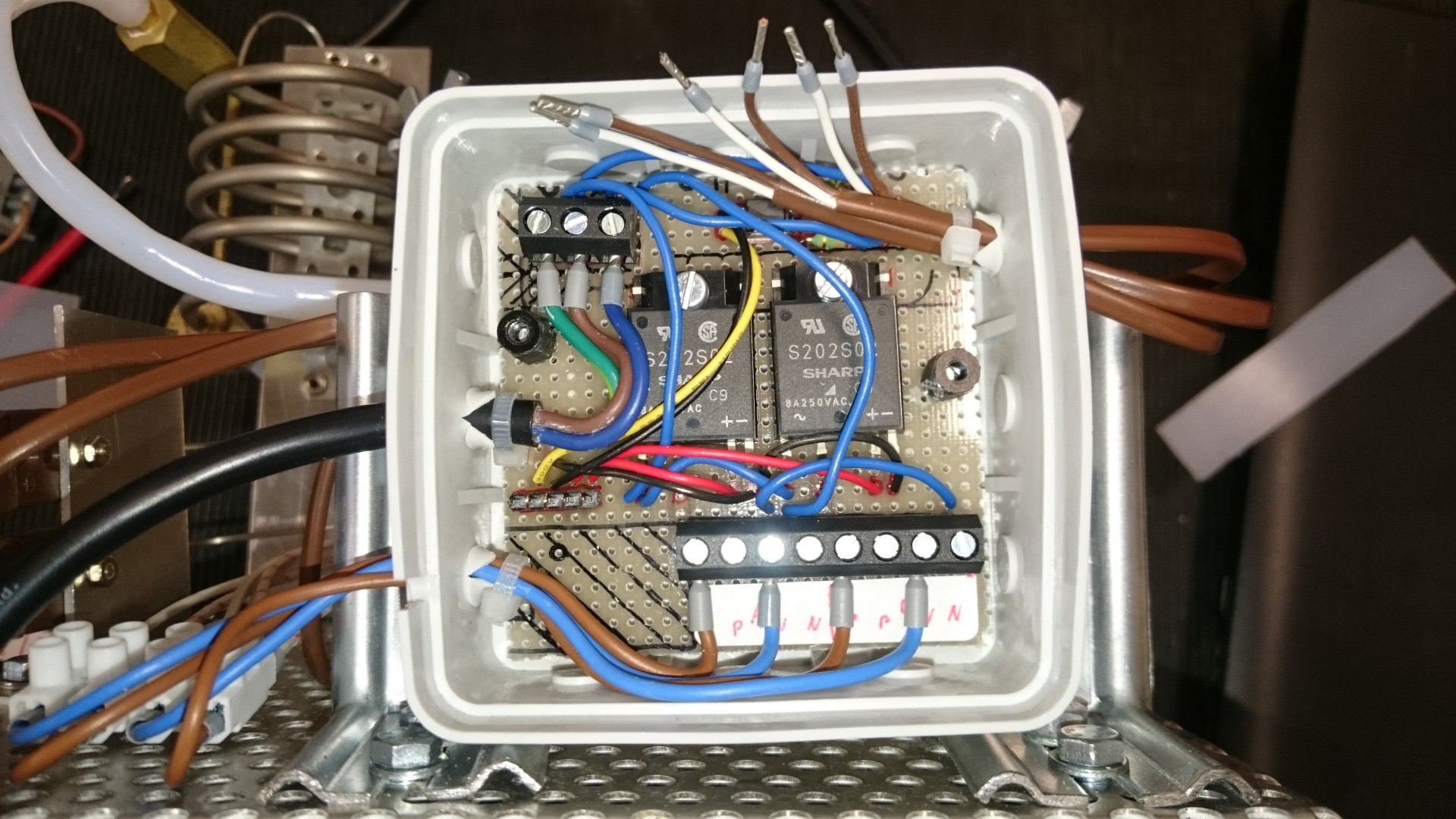 Silicone mat to isolate between lower and upper PCB: 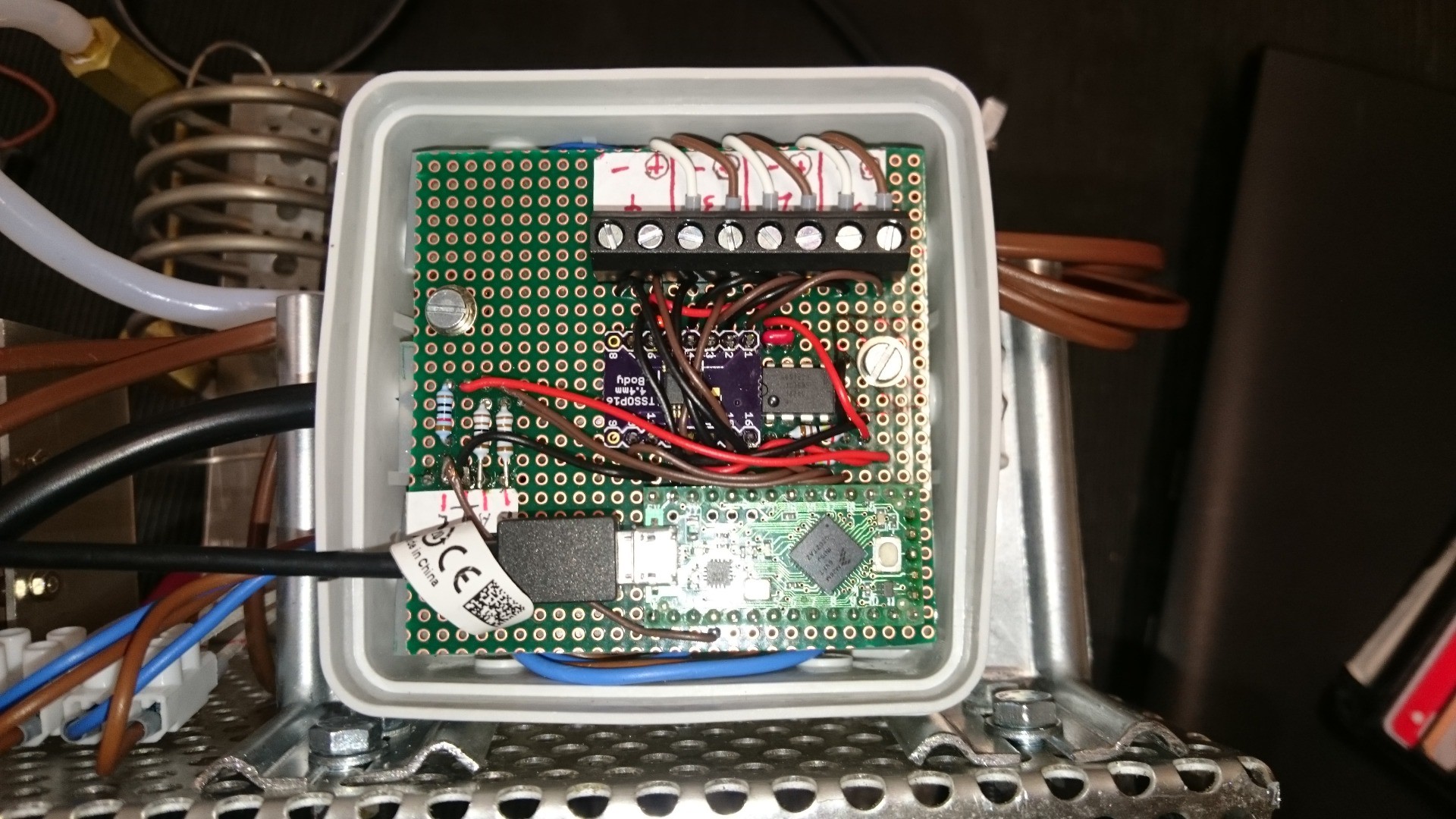 In the left view picture above you can see a small hole in the lid, which is above the Teensy LC's programming button. If nothing breaks I won't have to open the box again until I have to repair or change some of the electronics.

Overtemperature protection for heaters and galden

really cool looking.  you could add a master power switch and hide the terminal strips in the electrical box

There's no space left in the box (well, not enough for the strip). If you take a close look there are even enough terminals in the box for all wires, but the wires are too stiff. That's the reason why I added the extra terminal strip in the first place, because I could use more flexible wires from there to the box. A master switch could be added, I'll consider it. Thanks!

I meant add another electrical box, "single gang" for a light switch that would be your master switch.  Then use extra space inside that electrical box for the terminal strips.  Just an idea, obviously you could just use any box.